Last week, I introduced you to Charleston’s Bethany Cemetery. Many of the city’s German immigrants who found success are buried there. We’ll spend some more time learning about them today. But I’ll also share the tragic story of a not-so-wealthy family who suffered great loss. 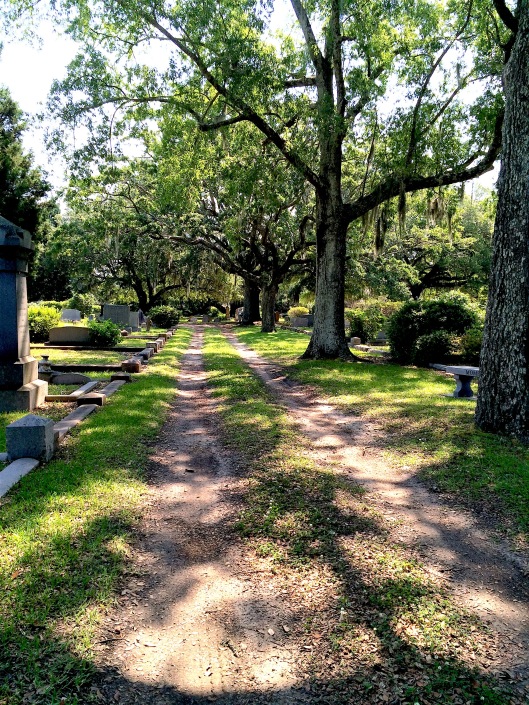 Like many Charleston cemeteries, Bethany has plenty of Spanish moss-laden trees lining its paths.

The Hollings monument intrigues me because its main feature is a stack of books. 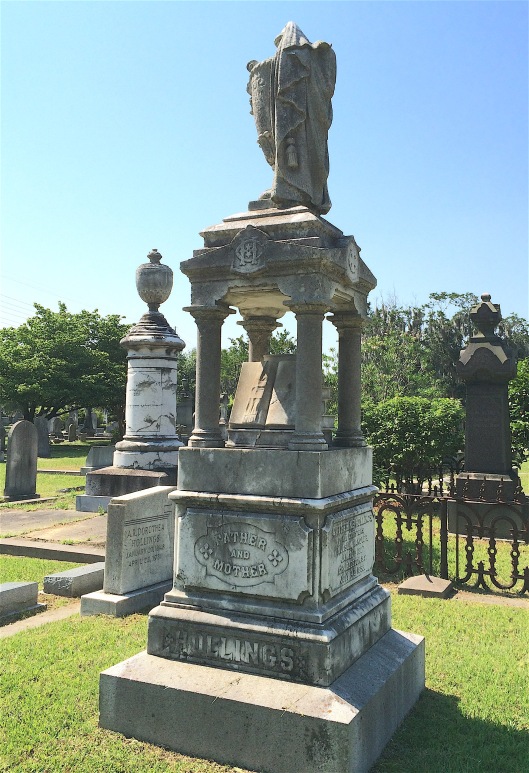 Grocer Behrend Hollings died in his 40s but wife Catherine lived 30 years after him.

Like Jacob Seebeck (see last week’s post), Behrend Hollings was a German immigrant but he arrived in Charleston many years earlier. He, too, went into the grocery trade. The 1860 U.S. Census indicates he was operating a store with his brother-in-law, Adolf Carstens. Jacob was married to Adolf’s sister, Catherine, and together, they had several children. 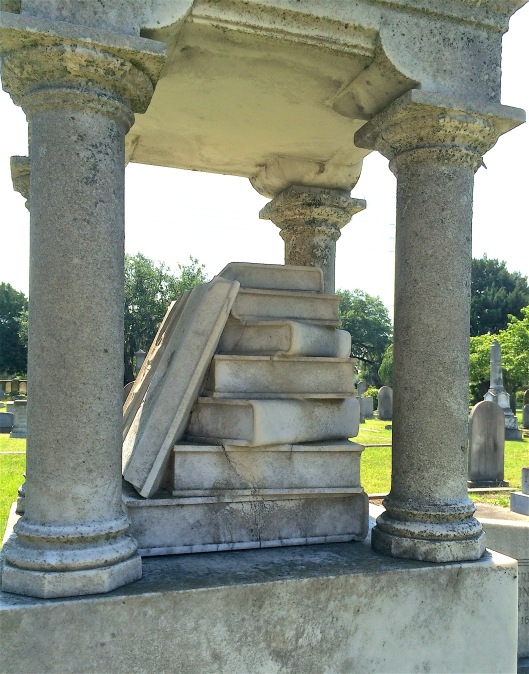 I don’t know if Behrend Hollings was especially intelligent or a book lover. But the detail on the stack is quite nice.

Sadly, Behrend died at the age of 44 of pneumonia in 1863. But the Hollings sons went on to run the family business for many years after that. Catherine died of apoplexy in 1893 at the age of 66.

One of the grandest monuments at Bethany is for the Bischoff family. Like the Hollings and Seabeck families, Henry Bischoff had a successful grocery business but his wealth was considerably greater than that of his peers. 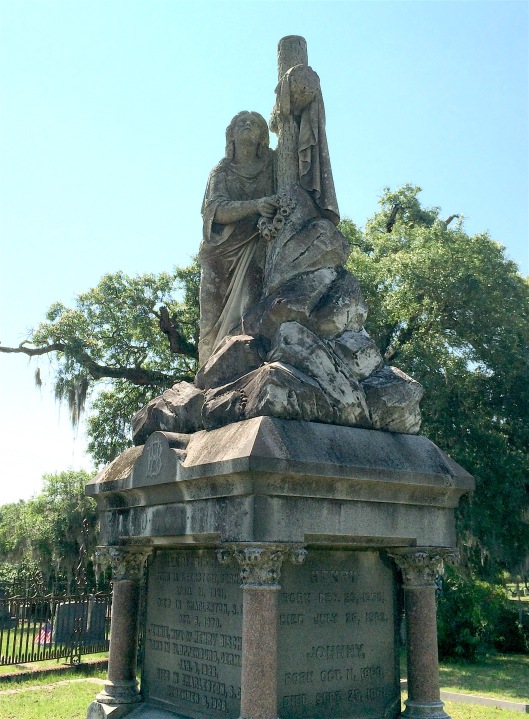 Henry arrived in Charleston before the Civil War and married the daughter of another prominent German immigrant, Jennie Melchers. During the Civil War, he was a Second Lieutenant in Theodore Cordes’ Company, South Carolina Cavalry Militia (German Hussars). In addition to his grocery business, he made quite a bit of money with a patent medicine enterprise selling something called Carolina Tolu Tonic. 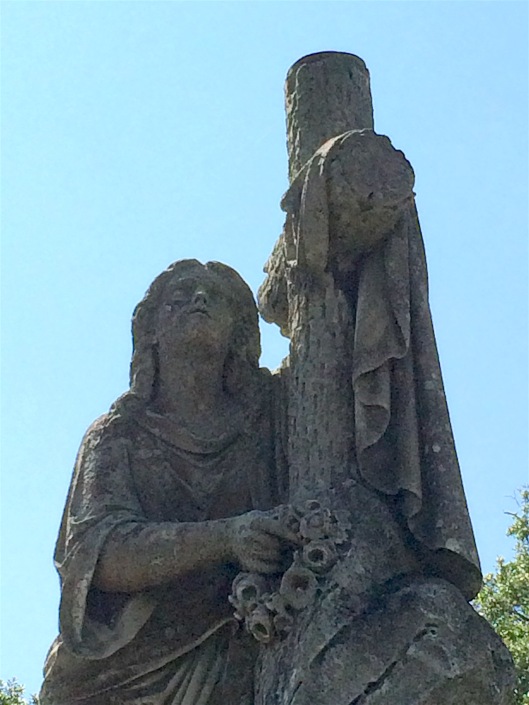 Thanks to an article by Dr. Susan Millar Williams, I learned that in addition to the South American herb for which it was named, Carolina Tolu Tonic had plenty of sugar and whiskey. While it may not have had much of a medicinal impact, those that took it were surely pleased with the effect. Here’s an advertising card from that era promoting the product. 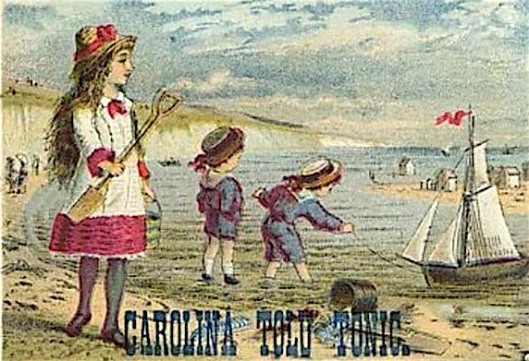 Patent medicine was big business in the late 1800s, even being sold to cure children’s ills. (Photo source: Bottles, Booze, and Back Stories, a blog by Jack Sullivan.)

In 1874, Henry bought three rice plantations along the Edisto River near Jacksonboro, S.C. and renamed them collectively as Rice Hope. I wanted to post a photo of the remaining plantation home that stands but the only photo I could find required written consent to use. 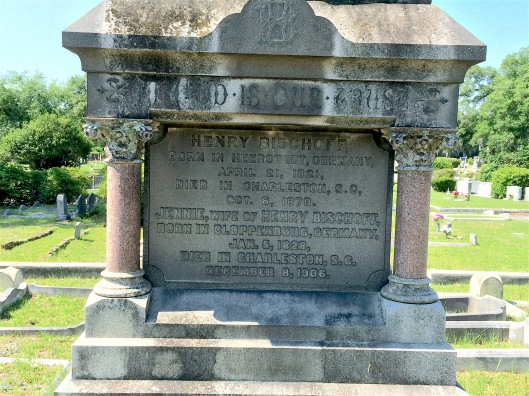 Henry Bischoff was only 56 when he died of “hepatic dropsy” (a form of liver disease) in 1878.

Henry died in 1878, leaving Jennie to manage his fortune. The plantation stayed in the family until 1918. Jennie died in 1906 and is buried with Henry at Bethany, along with several of their children.

The men I’ve featured thus far have been “Switzers” or German immigrants who were from the merchant class when they arrived in the 1800s. But I’d like to highlight a Palatine who shares some qualities with my ancestor Jacob Claar, who arrived in the 1700s in Philadelphia as an indentured servant from Germany. Michael Kalteisen, however, went much further than Jacob ever would. 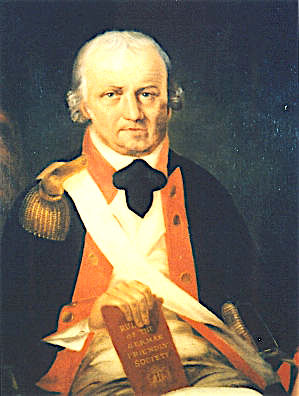 German immigrant Michael Kalteisen is shown in the uniform of Colonel of Artillery in the Patriot cause. (Photo source: The Moultrie News)

A native of Wuerrtemburg, Germany, Michael was the son of an educated but large family with little money. He arrived as an indentured servant in South Carolina in 1747. In other words, he had to work long enough to repay his master what it had cost to bring him to America. He had few rights and faced a lot of hard work.

After completing his indenture in the mid-1750s, Michael applied for and received 50 acres on Indian Creek between the Saluda and Congaree Rivers. In 10 years, he amassed more than 2,000 acres in the colony and had a spacious home that he and his wife turned into a wayfarer’s inn. He also operated a mule train between Charleston and the settlements of the upstate.

Michael was elected to both Provincial Assemblies in the mid-1770s and was awarded a captain’s commission so that he could coordinate the logistics of war materiel from the fork of the Saluda and the Congaree down to the coast. He acted as an intermediary for German Whigs in their struggle against the Tories in the center of the state. 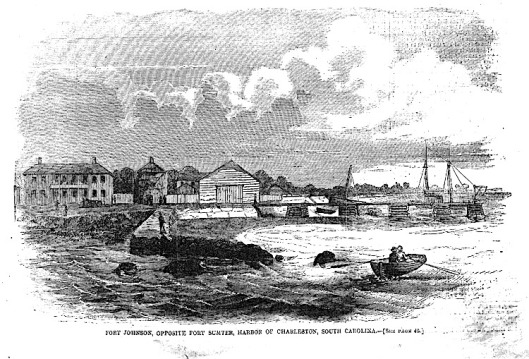 Fort Johnson, on James Island, was one of the federal fortifications seized by South Carolina after its secession. No trace of it exists today.

Michael was also one of the founders of St. John’s Lutheran Church and first president of the German Friendly Society in 1766, the second oldest German Society in America. He was serving as colonel and commanding officer of Fort Johnson when he died in 1807. He was originally buried in front of the German Friendly Society’s building in Charleston but in 1908 when this monument was installed, his remains were moved to Bethany. 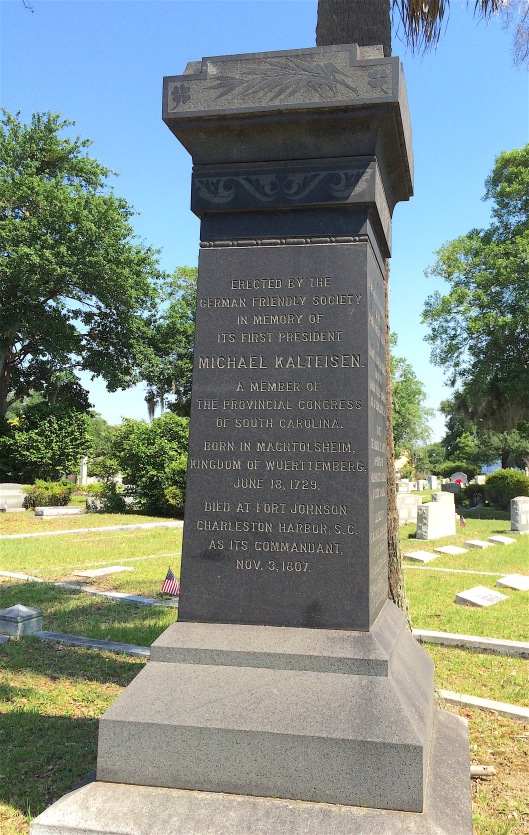 When Michael Kalteisen died in 1807, he was buried in front of the German Friendly Society building. His remains were moved to Bethany Cemetery in 1908 when this monument was installed in his honor.

Kind reader Sandy O’Neale shared this final tragic tale with me via e-mail. She’s done a great deal of research into her husband’s family. It’s the story of a couple who were the children of German immigrants. They were not wealthy like the Bischoff or Hollings families by any means. However, their names were known by all of Charleston when the tragedy was over.

Theodore Knickmeyer and his wife, Rebecca O’Neale Knickmeyer, were of humble means. The son of an orchestra leader, Theodore was a carpenter by trade and a fireman by night.

Rebecca was the daughter of carpenter William O’ Neale, who was also trained as an organist. Her uncle, Thomas, was a respected music professor and organist at the French Huguenot Church. After the 1865 fall of Charleston, Union soldiers dismantled the church’s organ and were loading it onto a New York-bound ship when it was saved by a group led by Thomas O’Neale, who begged the soldiers to leave it in Charleston. 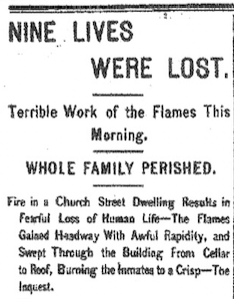 With the staircase destroyed by fire, the Knickmeyers were trapped in their third-floor apartment.

By 1898, Theodore and Rebecca had six children and were living in a third-floor apartment on Church Street. Rebecca’s father and her two brothers, Albert (16) and Caswell (14), were residing with them as well. Theodore had just brought his nephews home from the orphanage they had been living in to get a new start.

In the early morning hours of Feb. 28, 1898, fire broke out in the rear of the front room on the ground floor, spreading rapidly. A couple living on the second floor with their two children were saved, one of their children tossed out a window to a waiting fireman below. Another woman on the second floor was saved. But the fire, which  consumed the stairway that ran up the center of the building, cut off the Knickmeyers and O’Neales living on the third floor. 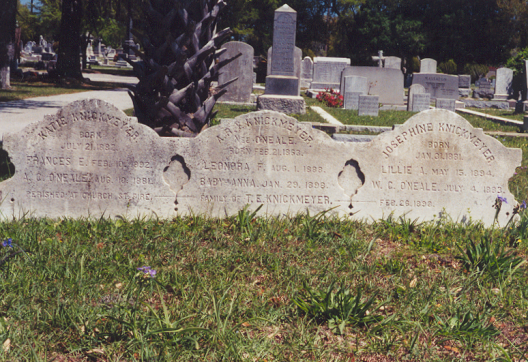 Nine lives were lost in a tenement fire on Feb. 28, 1898. Almost an entire family died in a matter of minutes. (Photo courtesy of Sandy O’Neale)

After breaking out a window, William O’Neale climbed out onto the roof of a shed to await rescue. But Albert and Caswell perished, too overcome by smoke to follow him.

Theodore, on duty that evening, heard the alarm and arrived at his family home too late to save his loved ones. A fund was set up to pay for their funeral expenses and they were buried together at Bethany Cemetery. Theodore remained a fireman for the rest of his life, moving to Augusta, Ga. for a time before returning to Charleston. He remarried and the couple had a daughter. He died of heart failure in 1920 in Charleston.

Theodore Knickmeyer’s brother, Albert, was also a fireman. He died in a tragic accident in 1910.

A tragic footnote to this story. Theodore’s brother, Albert L. Knickmeyer, was a longshoreman and a fireman with Charleston’s Engine 6. He died on Oct. 6, 1910 when he was running to the scene of a fire and was knocked over by the ladder of the fire engine as it turned the corner. He died two hours later. A widower whose wife had died of tuberculosis in 1902, Albert left behind six children. He is also buried at Bethany, his grave unmarked.

Thank you, Sandy, for sharing this story with me so I could share it with my readers today. It’s one I will never forget.

Next time, I’ll be down the street at St. Lawrence Cemetery with more Charleston stories. 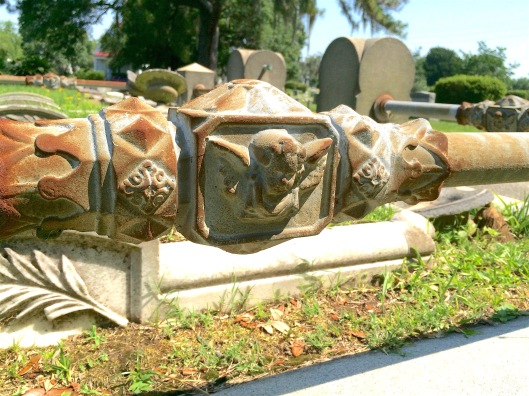 While the metal surrounding this family plot at Bethany is rusted, the detail on the angel’s face remains.