In 2013, the winner of the infamous Darwin Award was Lee Halpin, a British journalist who pretended to be homeless for a few days in an effort to produce a documentary about the problem. He was found dead on April 3 in a boarded up youth hostel in his hometown of Newscastle. Initially, people thought it was due to hypothermia since the recent weather had been so bitterly cold. 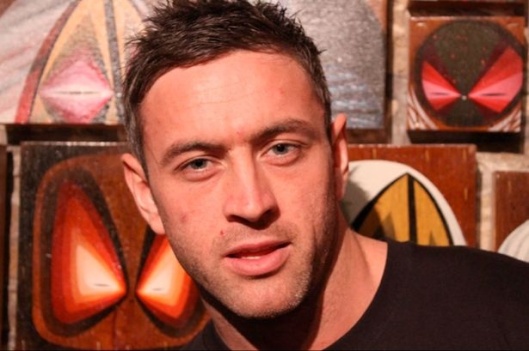 British journalist Lee Halpin died while trying to get an understanding of what it was truly like to live homeless on the streets. Photo courtesy of The Guardian.

Months later, however, a report came out stating this was not the case. Halpin died of something I had never heard of before: Sudden Adult Death Syndrome. Apparently, this is the term British pathologists use when they’ve ruled out everything else (including hypothermia).

In other words, they don’t what the cause of death was.

Currently, the Centers for Disease Control and Prevention (CDC) list heart disease as the top cause of death in America, with cancer coming in second. Not surprising. But in my experience as a cemetery hopper, I’ve found that there are many ways to die. Some of them are surprising. Like walking into what you think is an elevator car and falling to your death, as Riley Owen Medlock found out. I wrote about him last year. I’ve seen many causes of death, from “apoplexy” to cholera to diabetes miletus.

I recently visited Magnolia Cemetery in Charleston, S.C. While there, I photographed several rows of graves to post later on Find a Grave. Most of the graves had been documented with memorial pages already, but many of them had not been photographed.

When I do this, I look to see if the deceased is related to anyone else buried at that cemetery so I can “link” the two memorials. The research I do on Ancestry.com often results in some interesting surprises. South Carolina has many of their death records on Ancestry so it’s often possible to see a person’s cause of death. 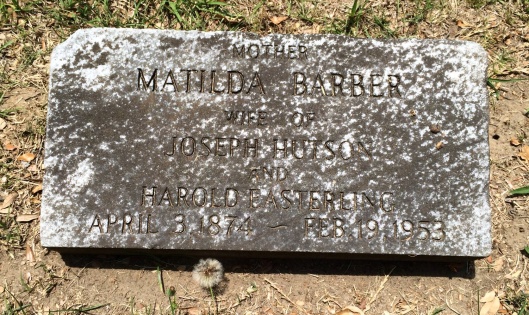 Matilda Barber’s grave is not unusual. It simply lists her and that of her two husbands. But one died in a surprising way.

For example, there’s the grave of Matilda Barber Hutson Easterling. It’s a small stone inscribed with her maiden name, her birth/death dates, and the names of her two husbands. Neither is buried beside her but her first husband, Joseph Hutson, is buried somewhere at Magnolia. He died in 1908.

In looking up Joseph’s records, I learned he was an engineer who died at the age of 33. Cause of death?

Suicide by ingestion of rat poison.

Now I don’t know about you, but that’s not something you see on a death record every day. Even in my work. Back then, people used potent toxic chemicals for many reasons. I can’t say for sure what type of poison Hutson took but it could have been anything from arsenic to cyanide to yellow phosphorous. Not a painless way to die at all. I don’t know what drove him to take such a drastic step but he did.

Matilda, who was in her mid-30s at the time, was a widow for several years after Joseph’s death. She married Harold Easterling sometime in her 60s and died when she was almost 80. Some have suggested to me that Matilda might have had something to do with her first husband’s demise. But nothing indicates she was ever investigated or charged with any crime. They didn’t have the forensic tools we have today to explore the possibilities.

When I visited Decatur Cemetery earlier this year, I took a picture of the grave of a young father named Grier Almand. He worked for the railroad, was married and had two young children. I knew he had died young but I didn’t know why until I did some research.

On Oct. 29, 1901, Grier had just coupled two railroad cars and walked between two other cars when he was struck by a switch engine. The engineer did not see him. Unfortunately, Grier’s legs were almost entirely severed from his body. They took him to Grady Hospital but after an operation, he died. 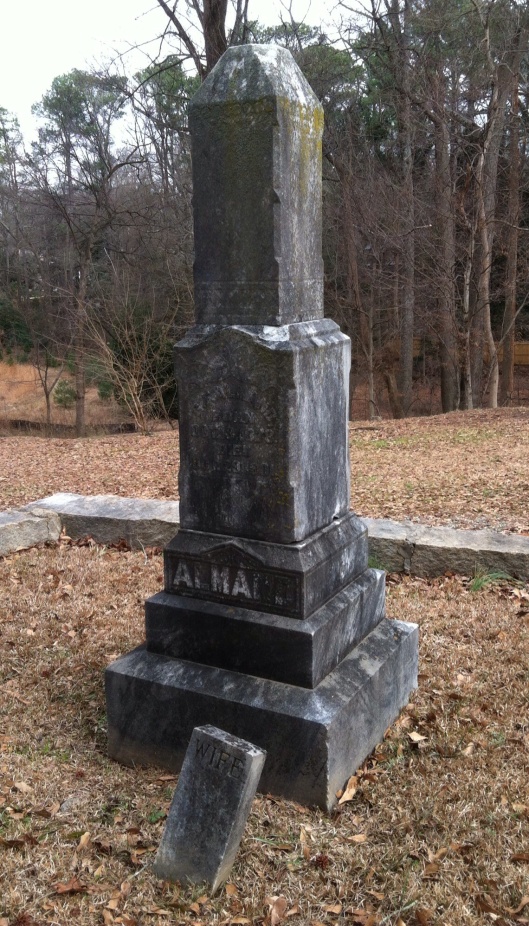 Grier Almand’s gravestone indicates nothing about the horrible cause of his death.

I was able to determine that Grier’s widow, Clifford, filed suit against the railroad for damages. I don’t know if she won the suit or not. She is buried with Grier, a simple marker inscribed “Wife” beside his much more ornate stone. I have a guess that the railroad may have paid for Grier’s marker as it most likely cost far more than a railroad worker’s salary could cover.

Deaths caused by accidents in railroad yards did occur with some frequency years ago. Another man I researched (buried in Magnolia Cemetery) died as the result of his work in a railroad yard. More recently, I once worked for a man whose wife died while attempting to step onto a passenger train in Germany. This probably happened in the mid-90s.

More often than not, people die from very ordinary causes. But every now and then, one will really stand out. And sometimes, we never do find out why, as in Lee Halpin’s case.

Perhaps some mysteries are meant to remain unsolved.

Discovering old, unique gravestones always excites me. Even the bizarre ones with skeletons reclining against hourglasses, like the one below. 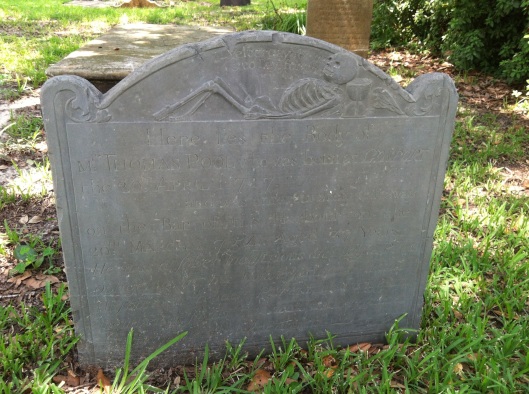 I featured this photo of a Charleston grave marker in a past blog post.

I admit, I am not a very enthusiastic fan of most modern markers, be they flat bronze plates that enable cemetery grounds crews to mow the grass more easily, or row after row of the same mid-century marble gravestones.

Don’t get me wrong. I know that most people cannot afford the elaborate statuary that I come across in older cemeteries. Some of it is so grand and ornate, it boggles the mind that someone had the money to pay for it. The type of craftsmen who spent months sculpting such works of art no longer exist. The creativity that so detailed those old stones seems to have faded into the sunset.

My viewpoint was challenged when I recently returned to Charleston and visited Magnolia Cemetery again. I came across a modern gravestone that even a traditionalist like me could stop and appreciate. From the moment I saw it, I realized that the person it was made for was very special. My apologies for the darkness of the photos but the marker is under some heavy tree shade. 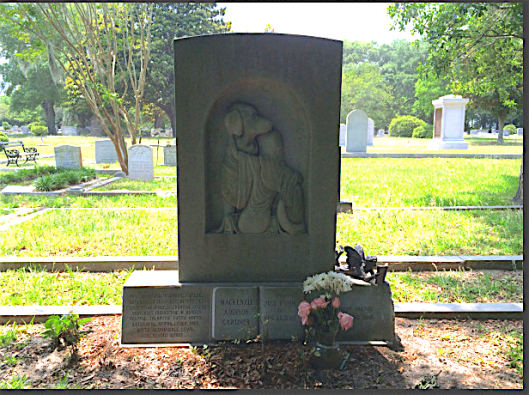 The memorial stone for Mackenzie Addison Gardner tugs at the heartstrings. 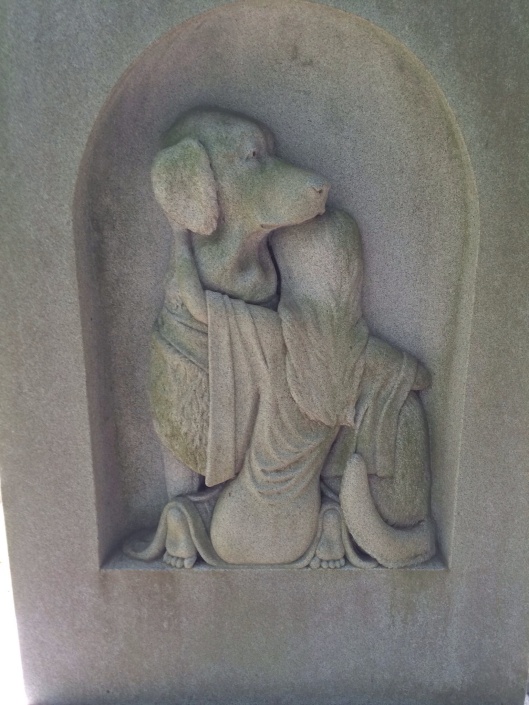 A little girl and her beloved canine companion.

Mackenzie Addison Gardner was only 11 when she died in 2007. A short life, to be sure. But the words engraved in the stone describe a child who lit up the world around her. 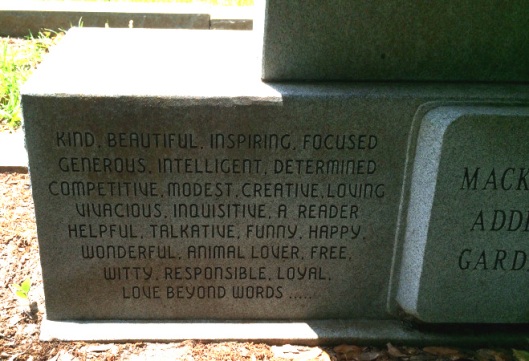 I don’t know much about Mackenzie. The obituary on her Find a Grave memorial page says the following:

…[she] was a member of the Jazz Dance Group of the Mount Pleasant School of Performing Arts and the Pinckney Players and enjoyed horseback riding, playing violin, going to the beach and lake, and making her parents proud. Mackenzie will be remembered by her close friends and family for being the bravest girl they will ever know.

The obituary also requested that in lieu of flowers, donations be made to the Cystic Fibrosis Foundation. I can only surmise that Mackenzie had CF and that her cause of death may have been tied to it.

UPDATE: I recently learned that this statue was done by a sculptor named A.C. “Clint” Button II of Carolina Sculpture Studio. The family came to him with the idea of having the marker made of Mackenzie and her beloved dog, Wolfie. You can watch this video to see how it all unfolded.

I was actually driving away from this part of the cemetery when I saw it and had to stop, get out and look at it. The shaded vista it’s located in is quiet and perfect for meditating. Just what she would have wanted, I think.

Mackenzie’s memorial changed my mind about modern gravestones. I’m happy to say I now look at them with a less jaded eye and am more open to the possibilities. I will always love the old, unique stones. But there’s room for the appreciation of new ones, too. 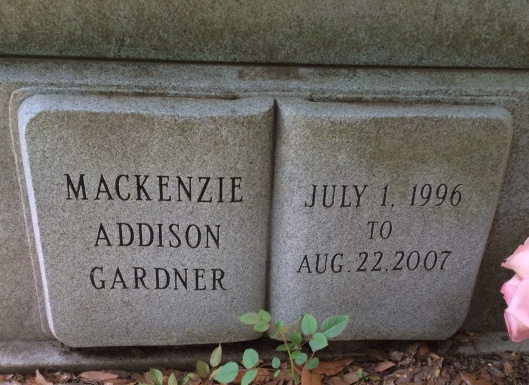