Now that I knew how to get to Rogers-Bell Cemetery, I felt more confident on my second trip north. And much warmer.

When I saw it tucked between two very large homes, I’d already passed it and had to back up. There was ample room to park on the grass. I noticed a wooden gazebo close by. This felt like a place where people were welcome to linger as long as they like. Clearly, funds are in place to take care of this cemetery and it shows. 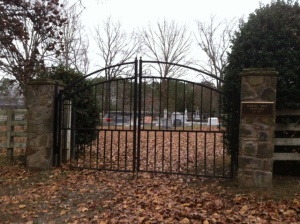 The gates of Rogers-Bell Cemetery, which you can also see at the top of my blog’s home page.

Looking through the gates, I paused. A large dog was nosing around amid the graves. My thoughts flashed back to the 70s horror film “The Omen” starring Gregory Peck. At one point, he and another guy are searching a spooky cemetery in Italy (at night!) when they get attacked by demonic Rottweilers. They barely escape with their lives. Mr. Roberts (the middle school teacher) had not said anything about a guard dog.

Undeterred, I pulled up the ground bolt and pushed the gates open. The dog ignored me for a moment and then looked up with a wagging tail. It was an elderly chocolate lab mix, not an attack dog. And the tag on his collar told me his name. 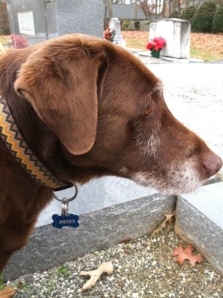 With my new (and somewhat fragrant) canine pal close by, I got to work. Rogers-Bell has only about 60 or so graves. The oldest ones are in a square area surrounded by a low decorative fence. That’s where John Rogers and his wife are buried. 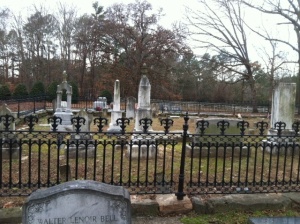 John Rogers (1774-1851) and his wife, Sarah Cordery Rogers, settled in the area in 1820 with their seven children. He was a close friend of President Andrew Jackson, having fought alongside him in the War of 1812. Rogers was married to the daughter of Scottish trader Thomas Cordery and Susannah Sconicoonie, a full-blood Cherokee of the Anigatagewi clan (known as the Blind Savannah Clan). Because of this connection, he was allowed to build his plantation home on the Cherokee side of the Chattahoochee River. John Rogers was mostly a farmer, but also established a ferry service across the river. Other ferries like McGinnis and Nesbitt also came to be at this time (now the namesakes of much-traveled roads).

Rogers was unique in that he was comfortable in both the Indian and white worlds. Many of John and Sarah’s children (they eventually had 12 total) married other mixed-blood Cherokees. As well-educated and affluent Cherokees, they played a major role in the New Echota Treaty of 1835 and the subsequent Trail of Tears. A number of them are buried in Chelsea Cemetery in Rogers County, Oklahoma (named after John Rogers’ grandson, Clement Van Rogers).

John Rogers’ second son, William Rogers, was a country lawyer who operated a farm and ferry a few miles north of his father’s plantation. He was also known for fighting for the rights of Cherokees during this turbulent time. To learn more about the Rogers family (and there’s a lot), read Unhallowed Intrusion: a History of Cherokee Families in Forsyth County by Georgia historian Don Shadburn. 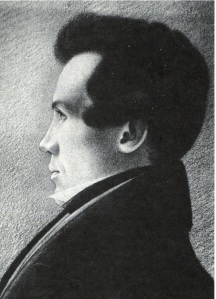 Portrait of Williams Rogers, artist unknown. It was drawn in 1836 in Washington, D.C. 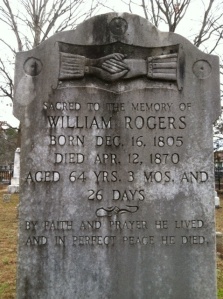 When you visit an old cemetery like this one, you notice yet again that children died frequently, and very young. Much more often than today. It’s hard to imagine, but a child could have a simple cold that developed into something fatal. Antibiotics, which we take for granted now, were not invented then. And yet these frequent deaths were accepted as a natural part of life at the time. 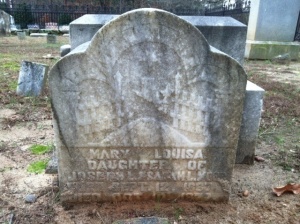 Mary Louisa Moor, who died at a tender age for unknown reasons. 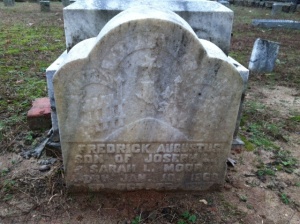 Fredrick Augustus Moor probably died of the same illness as his sister, Mary.

William Rogers’ grandchildren are an example of this (both of their gravestones are off of their bases). Siblings Frederick and Mary Moor died within two weeks of each other. She was 10 and he was 8. I can only guess they both died from the same illness, maybe diphtheria or typhoid (both common at the time).

Their parents had the tragic task of burying them both that autumn. One clue to the fatalistic attitude of the era is seen in the inscription on the back of the bases of both headstones. “Of such is the kingdom of Heaven.”

I spent more than two hours at Rogers-Bell taking pictures and double checking dates. (Petey eventually got bored and ambled over to the house next door.) It was cold but I was so engrossed in what I was doing that I didn’t really feel it. This was a special place and the quietness of it caught me. I didn’t want to rush the experience of being there.

And yes, I did find Sarah. 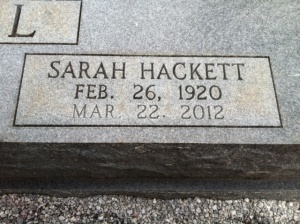 I promise I’ll get to the snakes in Part 3, the end of this adventure, back where I started in Rogers Cemetery.

9 thoughts on “A Tale of Two Cemeteries – Part Two”