In my college days, I worked as an intern for the Athens (Ga.) Daily News. One of my tasks was to be at the office on Sunday nights to take any obituary calls that came in. This was before the Internet and e-mails, so most funeral homes just called us and I took their obits over the phone.

It was through one of these funeral home contacts that I first heard the term “sitting up with the dead”. But it was never referred to in our obits like that. We were advised to write “the body will lay in state at the home of Mrs. XYZ” instead. It did nothing to make it sound less bizarre.

Even in the late 80s, few families were still practicing the ritual of bringing the body of a loved one back to the home so they could stay up all night with it before the funeral the following day. The communities that seemed to still adhere to this practice tended to be up in the mountains where old traditions die hard.

In decades past, many smaller rural communities had no access to a mortuary or funeral home. The tasks of preparing the body for burial and constructing the casket were done not by a mortician but the community members themselves. According to Southern newspaper columnist Emily Sells, this was a common practice in her small Tennessee town of Highland Mountain. 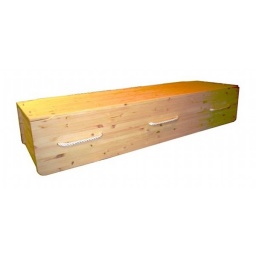 Web sites exist that show you step by step how to build your own coffin ahead of time. That’s the ultimate DIY project.

The men did the building of a casket, and the job of lining and dressing the inside as well as the outside of the casket was done by the women. The material used for the building of a casket, the labor involved, including the sewing, the batting and fabric used, was not something the family of the deceased person paid for. It was all done without any expectation of money exchanging hands. Neighbors helping neighbors was a way of life then.

It’s hard to imagine, in the mobile, disposable society we now live in, that this kind of concern for your neighbors was something upon which you could rely. But it was.

So what about sitting up with the dead? Why did families do this? Again, much of this took place before the commonality of funeral homes. After the body had been washed and dressed (embalming was very rare), it would be laid out on a large table or wooden board. If the weather was warm, a veil might be placed over the body to protect it from insects. Or someone might have the task of manning the fly swatter to take care of such things. 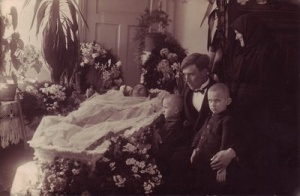 Sitting up with a dead body had a practical purpose as well. Along with flies being a problem, rodents could be an issue if the body was left alone overnight. So along with being on insect watch, you had to be on the lookout for mice (or worse).

Ever wonder where the ritual of sending flowers to a funeral came from? Sometimes the deceased, for several reasons, could become…a bit fragrant. The aroma from the profusion of flowers around the deceased helped mask the odor. So all those flowers did more than look pretty.

Other traditions accompanied sitting up with the dead. My mother still remembers how, when my great-grandmother died in rural Kentucky, that the family sat up all night with her body. The mirrors in the room were covered. Here’s why:

The tradition of covering a mirror with a cloth when someone dies initially goes back to ancient times. When a person had died through violent or suspicious circumstances all the mirrors in the home would be covered immediately by cloth. The reason for this was the belief that a returning spirit could use a looking glass as a portal. – taken from “The Weird World of Death”.

From an exhibition on Victorian funeral customs held in Denton, Texas in 2012.

In later times, mirrors were covered because it was believed that if the living caught their reflection in one, they would join the dead in the near future. It was also believed that a mirror falling and breaking of its own accord was a sign that a death in the family would happen soon. While these superstitions seem almost quaint now, they were taken quite seriously.

In the Jewish faith, one of their mourning traditions is to “sit shiva” at the home of the deceased (or principal mourner) for seven days. The word “shiva” means seven in Hebrew. Family and friends visit to pay their repsects. They, too, cover their mirrors but for different reasons according to orthodox rabbi Ari Enkin.

Mirrors are covered in a shiva house (a place of mourning) for two reasons. The primary reason is because prayer services take place there and one must ensure that no one faces a mirror during prayer. The other reason is to emphasize that a mourner avoids vanity during the shiva, focusing on their loved one rather than themselves during this period. A mourner is permitted, however, to look into a mirror to ensure their hair is in order, etc.

A less spooky Southern funeral tradition is bringing massive amounts of food to the home of those in mourning. Baptists, especially, are reputed for doing this and it still happens today in many Southern communities. Transplants from up North (like I once was) or out West are usually astounded by it. The fact is that in the past, a funeral did not always take place as fast as it does now. Family would come in from far and wide, and often stay for days. They needed to be fed so the community again pitched in their support via pies and casseroles.

I can attest to the fact, too, that when a loved one dies, the last thing you want to do is cook. To know that someone else has that covered is a true blessing. There’s even a joke among Baptists that we like to eat our way through our grief.

If I could have my own funeral catered, this would be on the table along with some peach cobbler.

And who wants to mourn on an empty stomach?

8 thoughts on “Sitting Up With the Dead”