I am a nerd, if you haven’t figured that out yet.

One aspect of my nerd-dom is that I love documentaries. The more obscure the subject is, the more I’m likely to watch. While this boosts my desirability as a trivia contestant, I’m still pretty weak on the sports categories.

Last year, I watched an episode of “Nova” on PBS about the history of the elevator. While Elisha Otis (who started the Otis Elevator Company, still in operation today) did not invent the elevator, his innovations in their critical braking mechanisms changed everything. Before that, elevators were often viewed as deathtraps and accidental deaths did occur. But by the 1900s, elevator safety was almost taken for granted.

Elisha Graves Otis, 1811-1861. His elevator braking innovations are still in use today.

Or so I thought, until I learned about Riley Owen Medlock.

Norcross City Cemetery is located off busy Buford Highway, tucked beside a large sports field. It is a medium-sized cemetery with several generations of local families buried there, plenty of history. Ivey Brown Wingo (1890-1941), a catcher for the 1919 World Champion Cincinnati Reds, is the most famous.

While hunting for a grave for a Find a Grave photo request, I came upon the graves of John O. Medlock and his wife, Elizabeth Medlock. If that name sounds familar, it is. Medlock Bridge Road is a major traffic artery in Gwinnett County, north of Atlanta.

Elizabeth’s death date was not recorded on the monument and that always gets me curious. Why? Thanks to Ancestry.com, I figured out she had died in 1921. For reasons unknown, nobody inscribed that on her grave.

But it was the eldest child of John and Elizabeth’s that got my attention. Riley Owen (R.O.) Medlock was a prominent businessman in Norcross. Among the buildings Medlock owned was the city’s first brick structure, which currently houses a successful Italian restaurant. He also founded and operated the Medlock Harness Company, which helped make him a wealthy man.

In his 40s, Medlock wanted to expand his real estate interests. He rented office space in Atlanta in what was then called the Empire Building. At 14 floors, it was one of the tallest buildings in the city. Later, it was known as the Citizens & Southern National Bank Building and today, Georgia State University’s J. Mack Robinson School of Business owns it. 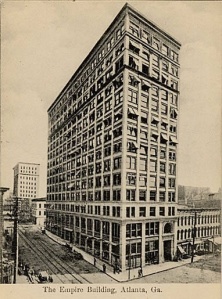 Located on the corner of Marietta and Broad Streets, construction of the Empire Building was completed in 1901.

I doubt that many current GSU students are aware of the horrific event that took place there on July 25, 1908.

On that day, for reasons not fully known, R.O. Medlock fell down the Empire Building’s elevator shaft to his death. When I read this, my first thought was that he had less than three seconds to realize what was happening. His death was probably instantaneous. I hope for his sake that it was.

I could find little about the incident but this article in the July 28, 1908 issue of the Atlanta Constitution contained this bit of information:

“Though a thorough investigation was instituted by the manager of the Empire building, W. B. Stovall, assisted by the engineer, R. C. Boone, the fatality is still unaccountable, except that it was one of those accidents that will happen in the best regulated affairs. No blame is attached to the elevator boy, and he will retain his position. As there was no eyewitness to the accident, no inquest was held.”

If such a thing happened today (and it does happen on rare occasions), you can bet there’d have been a thorough police investigation performed. Medlock’s widow, Emma Knox Medlock, would have had grounds to sue. But such things were unheard of at the time.

That evening, Medlock’s body was carried by wagon back to Norcross. Emma was no stranger to tragedy. She and Medlock had seven children together (he had one daughter with his first wife, who died in 1885) but only three survived past childhood. She did not remarry after her husband’s death and she is buried beside him.

According to the 1930 Census, Emma was still living in Norcross with her unmarried daughter, Minnie, while another daughter, Rowena, and her family lived next door. Emma and Minnie rented some of their rooms out to single female school teachers. The house is now known as the Medlock/Simpson House, the Simpson family having purchased it from Emma’s daughters after her death. It was sitting vacant and in bad shape until a few years ago when Don and Christine McClure purchased it, then restored it. 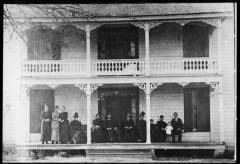 Around Halloween, ghost tours are held in Norcross City Cemetery. Riley Owen Medlock’s story is among those shared. It is a stunning tale, to be sure. But a sudden accidental death, especially one that could have been prevented, is doubly tragic.

And even in the “best regulated affairs”, it can all be over in less than three seconds.

2 thoughts on “Less Than Three Seconds”