Last week, I shared some of Westview’s rich history and confessed my irrational fear of mausoleums. Now let’s take a look around the grounds and explore the lives of some of the more prominent Atlantans buried there.

One of Westview’s most famous residents is Southern author Joel Chandler Harris, known for his Uncle Remus stories. Born in Eatonton, Ga. in 1848, Harris was the illegitimate son of Irish immigrant Mary Ann Harris and grew up in relative poverty. At 17, he left school and got a job helping plantation owner Joseph Addison Turner with his newspaper The Confederate in exchange for clothing, room and board.

During these Civil War years, Harris often wandered down to the slave quarters during his time off. He was enthralled with the stories of people like Uncle George Terrell, Old Harbert, and Aunt Crissy. The African-American animal tales they shared later became the foundation and inspiration for Harris’s Uncle Remus tales.

Joel Chandler Harris’ colorful tales of Brer Rabbit and the Tar Baby fascinated me as a child. Photo courtesy of Wikimedia Commons.

Years later, Harris and his wife lived in Atlanta where he worked as an associate editor for the Atlanta Constitution. His West End home, the Wren’s Nest, is located a few miles from Westview and is now a museum and cultural center. Some people give Harris’ writing short shrift because they think his portrayal of African-Americans in his Uncle Remus stories is unflattering. However, even some African-American authors give Harris credit for sharing the rich slave oral history that few had heard before.

Disney’s portrayal of Harris’ stories in the 1946 Song of the South is still controversial. It’s one of Disney’s few films that isn’t available on DVD in the United States. Some copies are available in Europe and Japan, and they occasionally pop up on eBay.

Monument for author Joel Chandler Harris and his wife, Esther.

Here’s a close up.

Harris’ boss and eventual close friend Henry W. Grady is also buried at Westview. Grady only lived to the age of 39 but he was a strong voice at a time of rebuilding and renewal in Atlanta. He spoke his mind about where he thought the South was headed and gained the respect of many.

His name also graces the journalism school at the University of Georgia from which I obtained my bachelor’s degree in 1990. I learned how to hone my craft in those classrooms and found the courage to test my wings in the world of newspapers in Athens. While I do not agree with Grady’s racist leanings, I respect his vision for good writing. It’s something difficult to find in today’s news. 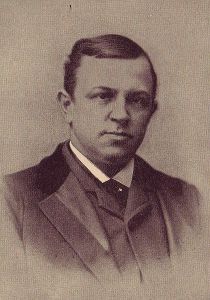 Henry W. Grady was originally buried at Oakland Cemetery in a friend’s crypt due to financial woes. He was later buried at Westview.

Another familiar Atlanta name is Robert Winship Woodruff, president of Coca-Cola from 1923 to 1954. His father purchased it from Asa Candler (who is also buried at Westview) in 1919. When the company faced financial difficulty, they elected Robert president, who was then 33. Over the next several years, with his guidance, Coca Cola became the worldwide entity it is known as today. He’s also known for his philanthropy efforts, having donated millions to Emory University. The Woodruff Arts Center, home of the Atlanta Symphony and Atlanta Opera, is named in his honor.

The Woodruff family’s monument is visited by hundreds every year.

I have to share a story about one last famous Atlanta resident, Thomas R. Egleston, Jr. He founded Henrietta C. Egleston Children’s Hospital (now known as Children’s Healthcare of Atlanta), named after his mother. Henrietta had four children die at an early age. The hospital pioneered programs that directly involved parents in their child’s care, beginning with a policy of allowing parents to spend the night. The Egleston family monument is a lovely Celtic cross with carved seats on each side.

The Egleston family monument is one of the largest at Westview.

It was while I was snapping pictures of the monument that I made a most unusual discovery on one of the seats. Someone had clearly left (ahem) a most intimate article of clothing there. 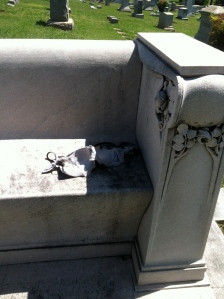 Is that what I think it is?

Yep, it was a bra. I haven’t been cemetery hopping long but I’ve never found lingerie in a cemetery. It’s just not something I expected to find. I wondered if I should tell one of the many maintenance guys working on the property, but the thought of having to have that kind of conversation made me veto that option. Should I take it to the office? Ultimately, I decided to leave it right where it was so someone else could make that decision. It wasn’t going to be me!

One final monument attracted my attention for simply the fact that it fascinated me. The grave of Atlanta mercantile owner Stephen Andrew Ryan is marked with a large stone cross with a young woman seated at its base, the expression on her face a striking one. Ryan died in 1908, leaving behind a wife and a daughter, Edith, who was only 11 years old at the time. According to his obituary, he suffered from paralysis the last 12 months of his life. 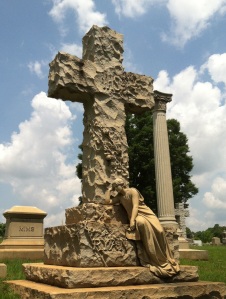 The look on the woman’s face is hard to discern, as are her thoughts.

I wonder if the woman represents Daisy, his wife, longing for the time she will join him. The look on her face is one of resignation, of waiting. I could not find a marker for Daisy or Edith. I wonder what happened to them, how they handled life after Stephen’s death. 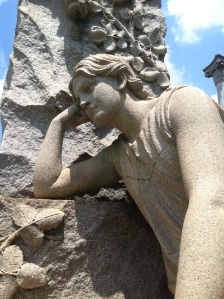 In a way, that statue epitomizes what Westview is to me. Beautiful in many ways but a mystery in others. The quiet serenity of the Abbey chapel with its stained glass is a unique sight to behold. Unlike Oakland, which feels like an open book to me, Westview is an enigma I have yet to figure out. Maybe I’m not meant to.

But I’ll be back.