Is there a difference between a casket and a coffin?

This kind of question probably doesn’t keep you up at night. At the same time, funeral terminology can get confusing if you’re not familiar with it. That’s why this post will be the first installment in an occasional series called Death 101.

Today, the terms coffin and casket are used interchangeably. In the past, the term for the container people were buried in was called a coffin. Casket is now more commonly used. However, there are differences between the two.

The most obvious distinction is the shape. Coffins have either six or eight sides, either hexagonal or octagonal. Remember those old black and white horror films featuring vampires, zombies and other creatures of the night? Those are coffins being depicted.

Christopher Lee portrayed the infamous Transylvanian in the 1958 film “Horror of Dracula” That’s a coffin he’s peeking out of.

Coffins are shaped that way to conform to the shape of the human body: narrow around the head, broad on the shoulders area and much narrower down to the feet. By contrast, caskets are rectangular and are what most people are familiar with. That’s what funeral homes sell now. I wonder if the increasing girth of the average American is one reason for the more (ahem) generous shape.

So why the change?

The term casket was initially used as a euphemism for a coffin when funeral parlors started replacing mortuaries. Coffin seemed offensive with the sense of finality that comes with it. But is casket that much better, you might ask? Years ago, yes.

The original meaning of casket was a box for keeping precious belongings like jewelry. Using “casket” to mean “coffin” was meant to diminish the negative connotation that comes with the burial container. Even the death care industry is aware of the value of good marketing.

This explains something I’d always wondered about in Charlotte Bronte’s novel, Jane Eyre. In it, governess Jane becomes engaged to her mysterious employer, Rochester. At the altar, she learns of a tiny complication that’s been living in Thornfield’s attic: Rochester’s insane wife, Bertha. Not eager to become a sister wife, Jane flees. Months later, she returns to find Thornfield burned to the ground, Bertha dead, and Rochester maimed and half-blind. He talks about when he realized she had left him:

After examining your apartment, [I] ascertained that you had taken no money, nor anything which could serve as an equivalent! A pearl necklace I had given you lay untouched in its little casket; your trunks were left corded and locked as they had been prepared for the bridal tour.

Another difference between the two is in materials. Coffins are usually very simple, made of wood, and often do not have handles or interiors. Even back when people were only beginning to adapt the practice of burying the dead in vessels, a cross right above the deceased’s head is the only adornment a coffin would have.

Coffins were almost always handcrafted by one person, often the local carpenter. It was he who would “undertake” the task of taking care of the final disposition of the deceased. That’s where the term “undertaker” comes from.

Caskets are typically made of softwood or hardwood, or 16, 18, or 20 gauge metal. In fact, most caskets purchased today are metal. They are often intricately designed and have engravings, imagery, gold or silver details, handles, and much more. Furthermore, caskets tend to have interiors made of silk, velvet, or other high-quality fabrics. They can also be incredibly expensive.

This 14 karat gold casket retails for about $30,000. Michael Jackson and James Brown were buried in this model. It’s made by the Batesville Casket Company.

In America, caskets are made by a handful of large manufacturers. Two of them are Batesville and Aurora (both based in Indiana). The shells are often built on an assembly line, with the additional hardware and decorative elements added later. This is quite different from one carpenter building a simple wooden coffin by hand. 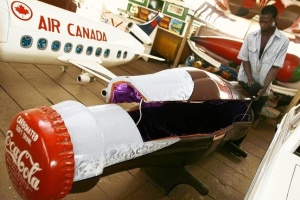 Ghana has a colorful tradition of handcrafting fantasy caskets based on the deceased’s wishes, from soda bottles to giant fish to a replica BMW.

You can actually buy your own casket at places like Costco or BJ’s. They will ship it directly to the funeral home of your choice. This can save a good deal of money since the casket you might purchase from a funeral home is going to carry a markup in price. However, I did note that of the 37 states in which Costco sells and will deliver caskets to, Georgia is not one of them.

Casket manufacturers are feeling the pinch these days as the demand for cremation continues to rise. As a result, companies like Batesville are coming up with more options in the way of decorative containers and urns in which to place ashes.

At the same time, the need for caskets is never going to completely go away. There are too many religious issues attached to cremation for that to ever happen. But that’s a topic that deserves its own blog post another time.

As for me, I’m partial to the idea of a simple wooden coffin, not a casket. It brings to mind the lyrics from a song by Doug Stone:

I’d be better off in a pine box,
On a slow train back to Georgia,
Or in the grey walls of a prison doing time.

Then again, maybe not.

Photo courtesy of Collegiate Memorials, based in Macon, Ga.