Did you know that Adventures in Cemetery Hopping has a Facebook page? During the week, I post photos and interesting articles related to cemeteries and other related issues. Please stop by! You can visit it by clicking here.

This week marked a milestone in my cemetery hopping career. I have now fulfilled 101 photo requests for Find a Grave! To me, that’s a pretty big deal. It also marks my first anniversary as a Find a Grave photo volunteer.

In truth, I’ve taken a lot more photographs of graves than 101. That number is actually 5,153. Most are photos of graves that were either undocumented or their memorial did not have a photo.

Today I am featuring some of my more memorable photos. Not all of them are for happy reasons. Some are not even photo requests. I’ve written about a few of them earlier and there are some I’ve never forgotten but tucked away in my mind. I hope you enjoy my trip down Memory Lane. 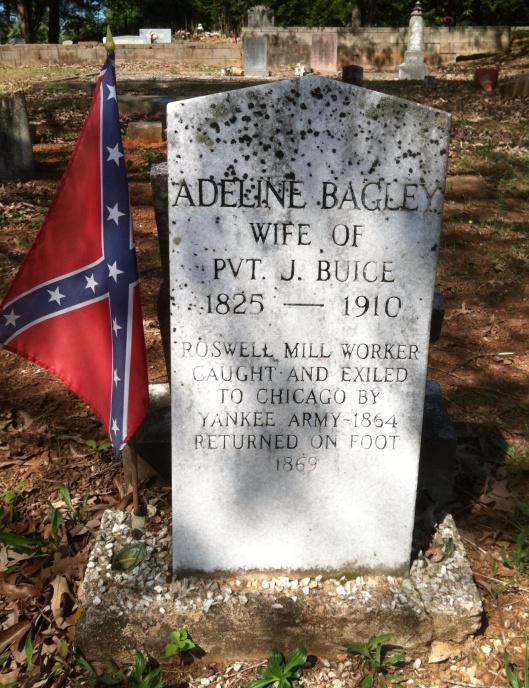 Adeline Bagley Buice is not a name you’ve probably heard. But you won’t soon forget her.

The story of how Adeline walked all the way from Chicago back home to Georgia with her little daughter in tow after the Civil War amazes and inspires me. I would love to know more about what her life was like after she returned and reunited with her probably utterly baffled husband (who thought she was dead). 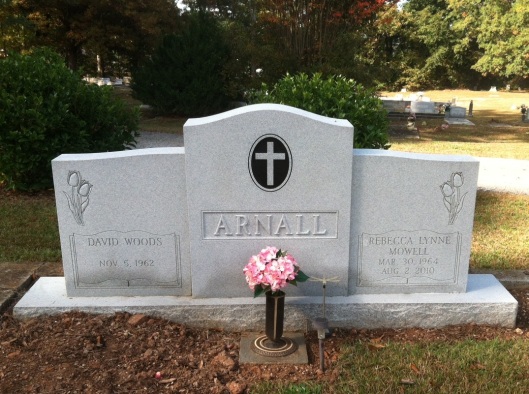 Becky was only 46 when she died. But she touched many lives in that short time.

Becky wasn’t a photo request either. But like Adeline, she was one of a kind. Becky was someone I knew and loved, even though we had lost contact over the years. I met her when I was 9 or 10 when we joined our church. Her father, C.J. Mowell, was the local coroner and a funeral director. She and her siblings lived with C.J. and their mother, Faye, over the funeral home.

Becky had a spark about her that few people have. She could made you laugh and she was always into something. She also had one of the kindest hearts ever. As a child, she made me feel special and loved. Her early death hit many of us hard and it’s still difficult to grasp. A few weeks ago, I finally got to visit her grave at Fayetteville City Cemetery with a friend who also knew her.

God bless you, Becky. We miss you. 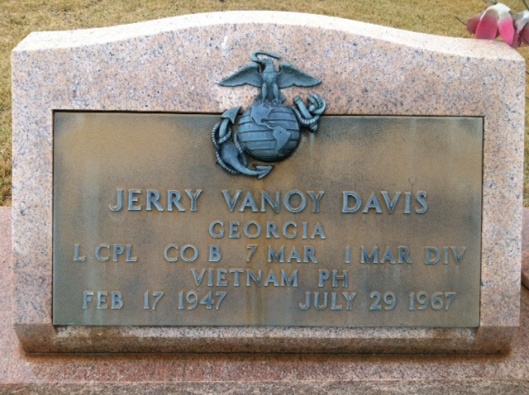 Lance Corporal Jerry Davis made the ultimate sacrifice for his country. But few will ever remember him.

Jerry was one of my first photo requests and I wrote about him soon after. As I read about him (there wasn’t much), I felt a surprising amount of grief for a young man I had never met. When I discovered that his mother had lost him and his brother (who was not in the military), it felt all the more tragic. To lose one child is a tragedy beyond comprehension. To lose another child in combat is even more difficult to endure.

The Vietnam War (and it was a war, not a “conflict”) was a controversial war. Daily casualty counts were the norm on the evening news. But Jerry’s life was more than a statistic. He was someone’s son and brother. And he was loved. 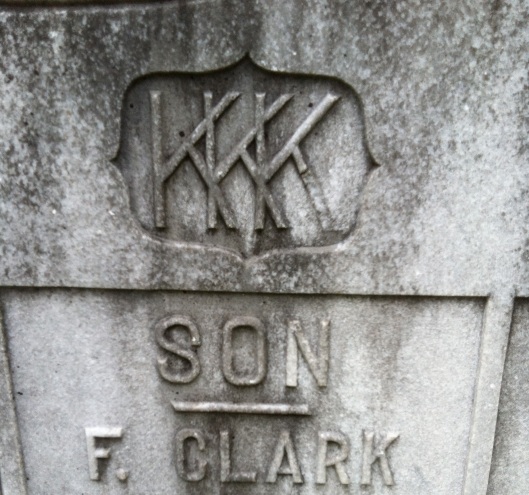 Yes, that IS what you think it is.

I stumbled upon a family monument (three names were on it) during the summer while photographing a church cemetery. I’m not going to reveal the last name of the family or location of the grave out of respect to the family (who probably wishes it had never happened). Above the first name of F. Clark is a symbol that made my blood run cold.

It is the symbol of the Ku Klux Klan.

After getting over my initial shock, I did some research and realized that yes, it WAS what I thought it was. F. Clark worked at a funeral home (of all places) and his death was from drowning in the Chattahoochee River. He was only 21 when he died. I don’t know if his parents were Klan members as well. I hope not.

I do know that many in the South, and if you aren’t aware of it, all over the country, were active in the Ku Klux Klan. Some still are. Heck, they were still having meetings on top of Stone Mountain in the early 70s. But to see a blatant symbol of hate in a cemetery shocked me. How could anyone have stood quietly by and allowed this to happen? I don’t know. I only hope I never see that symbol again. 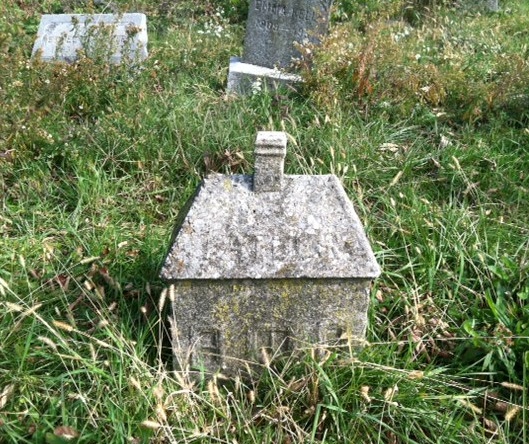 This little house stood out among the other graves. I wonder if the person who it was for built homes.

I found the Little House (as I call it) a few months before I became a full fledged cemetery hopper but I wrote about it back in June. It was resting amid the tall grass of Old Greencastle Cemetery in Dayton, Ohio.

There’s no name on it so the identity of the deceased is unknown. It isn’t grand or ornate. But its simplicity caught my eye and it’s now one of my favorites. I’ve never seen anything quite like it before or since. 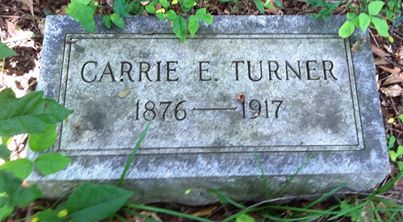 Carrie’s life is still shrouded in mystery. But when I found her grave, it opened up new doors for her family, who had been searching for her for years.

Carrie was a photo request in a round about way. I had taken a picture of her grave marker in Fellowship Baptist Church Cemetery in June as part of my work to photograph as many graves there as possible. Problem was, while I added a memorial for her, I forgot to add the photo of her grave.

A few months later, I saw a photo request for Carrie on Find a Grave and realized my error. I claimed the request and in a few minutes had posted the picture.

What followed as a result I wrote about in August. By some twist of fate or a push from God (I think it was the latter), I took a photo of someone’s long-lost grandmother’s grave. Janet Turner and her family had been looking for her over many years. They still aren’t sure what happened to her grandfather after Carrie died and he was forced to place their children in Georgia Baptist Children’s Home. So a lot of mystery still remains. I hope to have an update on Carrie some day.

This first year of cemetery hopping has been a journey that took many unexpected twists and turns. I’ve learned a lot and I’ve “met” people who led some amazing lives. Some of the cemeteries I’ve explored will stay in my memory forever. Overall, the efforts I’ve put into it (and this blog) have been well worth it.

What will the next year bring? 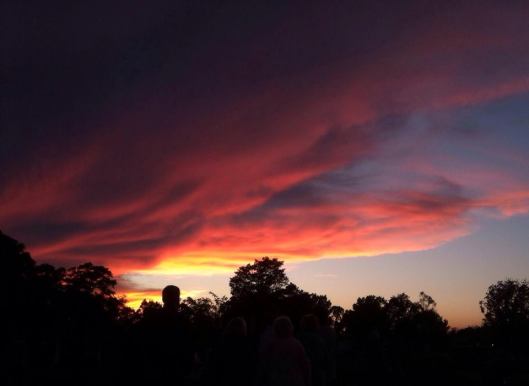