I enjoy discovering small, tucked away cemeteries. But I’ve got to admit, sometimes I love “hopping large”! 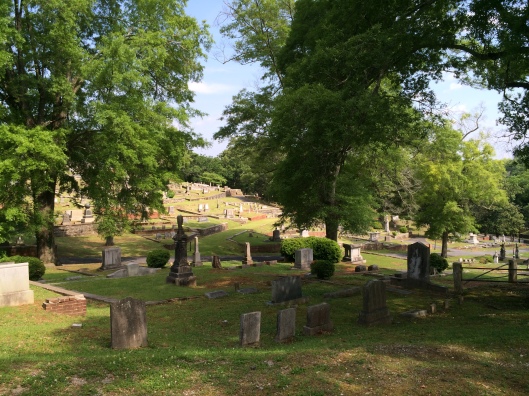 Myrtle Hill Cemetery is the second oldest cemetery in Rome, Ga. The cemetery covers 32 acres and about 20,000 people are buried there.

Myrtle Hill Cemetery came to my attention last year when I wrote a post on famous ladies who are buried in Georgia. So when my husband announced he and our son were going on a “guys only” road trip in May, I made a mental note to visit Myrtle Hill while they were away. My fellow Church Chick, Sarah, agreed to ride shotgun.

I hadn’t been to Rome since the 80s when I visited my high school friends Melissa and Valerie, who were attending Berry College at the time. I’ve seen Melissa several times since then but haven’t had much contact with Valerie. As it turns out, she recently returned to Rome to become pastor of a Methodist Church. Via Facebook, we arranged to meet for lunch during my visit.

At first, Sarah and I weren’t sure things would go well because it started to rain about 10 miles outside of Rome. But little will deter a cemetery hopper when she’s got her mind set on something. We parked in the lot beside the bridge that leads into downtown Rome and with umbrellas in hand, started out.

Umbrellas were a necessity during the first half of our hop. Myrtle Hill is still an active cemetery and recently added a new mausoleum, which Sarah gave her thumbs up to.

Myrtle Hill was a battle site long before it became a cemetery. In 1793, along with about 800 troops, General John Sevier (in an unauthorized plan) pursued a band of about 1,000 Cherokee Indians to nearby Cartersville seeking to avenge the scalping of 13 settlers near Knoxville, Tenn. (among other reasons). The result was the Battle of Hightower. Sevier later became governor of Tennessee and the town of Sevierville (outside Pigeon Forge) was named after him. A monument in his honor is on the edge of the cemetery.

The Cherokee created a defensive position on Myrtle Hill and used a guard to try to prevent Sevier from fording the Etowah River below. Ultimately, the Cherokees failed and after their leader, Kingfisher, was killed, they fled and Sevier burned down their village.

In 1850, nearby Oak Hill Cemetery had filled up and the need grew for a new cemetery in Rome. The hill, known for its Vinca minor (trailing myrtle), was an early candidate. The land was purchased from Shorter College (formerly Rome Female College) namesake Alfred Shorter. In 1857, Myrtle Hill Cemetery opened.

This is the monument for Col. Alfred Shorter and his wife, Martha. Shorter was the previous co-owner of the land Myrtle Hill is on. He was also the namesake of what is now Shorter College.

The cemetery was soon put to use during the Civil War when an earthwork fortification named Fort Stovall was built atop it. Today, the Confederate dead monument stands atop Myrtle Hill where the fighting most likely took place, while the actual Confederate dead are buried down by the cemetery gates.

Myrtle Hill’s Confederate monument sits atop the cemetery where Fort Stovall probably once stood during the Civil War. I took this picture after lunch when the rain stopped.

A monument honoring controversial Confederate Brigadier General Nathan Bedford Forrest, who saved Rome from Union forces in 1863, was originally situated at a downtown intersection. I’ve heard that it distracted drivers so much that it had to be moved to the cemetery, where it now stands.

I’ve read that this monument of Confederate Brigadier General Nathan Bedford Forrest (erected by the United Daughters of the Confederacy in 1908) proved to be a distraction to drivers when it was in downtown Rome so they moved it to Myrtle Hill.

The structure of Myrtle Hill can be compared to a wedding cake with graduated layers leading to the stop. Lines of grave markers are situated along these “layers”, watched over by a canopy of trees and other greenery. This photo by Drew Tyndell does it more justice than my iPhone can. 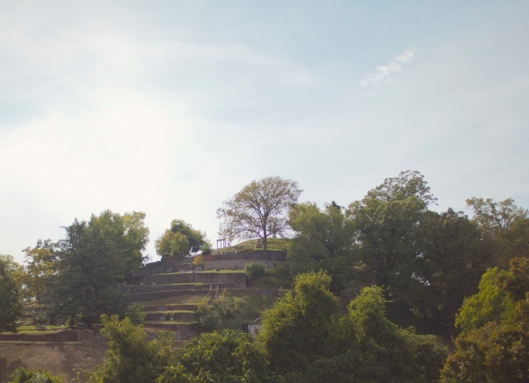 Myrtle Hill Cemetery is situated across the bridge over the Etowah River and is structured almost like a wedding cake with “layers” you can walk up. Photo courtesy of Drew Tyndell.

One of the graves I most wanted to see was that of First Lady Ellen Axson Wilson. She was the first wife of President Woodrow Wilson and the only First Lady buried in Georgia. Her monument was even lovelier in person than photos indicate, with beautiful roses placed at the base. Mrs. Wilson was an artist herself and I think she would have appreciated the work that went into the stone.

First Lady Ellen Axson Wilson is buried beside her father, the Rev. Samuel Axson. It was in his church that the Wilsons first met.

Another famous resident of Myrtle Hill is Dr. Robert Battey, the first physician to successfully perform an oophorectomy (removal of the ovaries) on Julia Omberg. The procedure was supposedly performed on the patient’s kitchen table and afterward, Dr. Battey remained at Omberg’s side for the next several days until her recovery was assured. My research indicates a lynch mob waited outside in case this did not happen. Happily, Mrs. Omberg lived well into her 80s, thanks to Dr. Battey. His tomb is near the top of the hill. 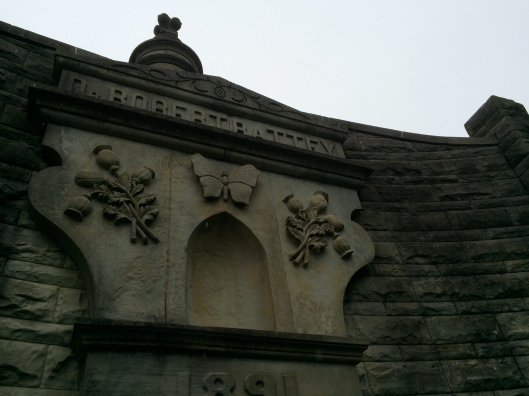 After his successful surgery, Dr. Battey became professor of obstetrics at the Atlanta Medical College where he stayed until 1875. He practiced medicine until his death on November 8, 1895.

For some reason, there was an empty tampon box at the foot of Dr. Battey’s tomb. Considering that he performed the first operation removing a woman’s ovaries, we couldn’t help laughing.

Here you can see the top of Dr. Battey’s tomb while getting a beautiful view of downtown Rome.

The terraced sides of Myrtle Hill fascinate me. After lunch with Val, when the rain stopped and the sun came out, I explored them. Some of the stones are in better shape than others, but all in all, it’s a lovely forest-like setting.

These terraced grave sites make for a peaceful setting but require some definite physical fitness if you are climbing up the many steps on the hillside. The graves of Charles and Bittie Warner are the two block-type stones in the front.

One of the more intriguing people whose grave I photographed was Charles Jacques Warner, a native of England who came to America 1848. He married Elizabeth “Bittie” Brown in Virginia, where they had two children. They purchased a photography studio in Rome and with Bittie’s help, it became a success. Charles was also a talented musician who gave lessons.

According to a wonderful blog post by Lee Eltzroth, Charles left town around 1880 with one of his beautiful female pupils (and dragged his daughter Lula along) to pursue his dreams in New York City.

Bittie, however, did not sit at home and weep. She tracked Charles down. While he and his young lover had taken jobs in a minstrel show, young Lula had been forced to perform in a stage play, which horrified Bittie. Eventually, Bittie got full custody of Lula and returned with her to Rome. Oddly enough, Charles is listed in the 1900 U.S. Census as again living with his family in Rome, so Bittie must have taken him back. Despite Charles’ “midlife crisis”, Lee reports that when he died on Nov. 29, 1906, the newspapers in Rome called him “an old and highly respected citizen of this city.”

Myrtle Hill Cemetery is also home to some of the most interesting angel monuments I’ve ever seen, with quite a variety of expressions. I’ll share a few and you can judge.

Holding what looks to be an open Bible, this angel has an almost defiant look on her face as she gazes Heavenward. 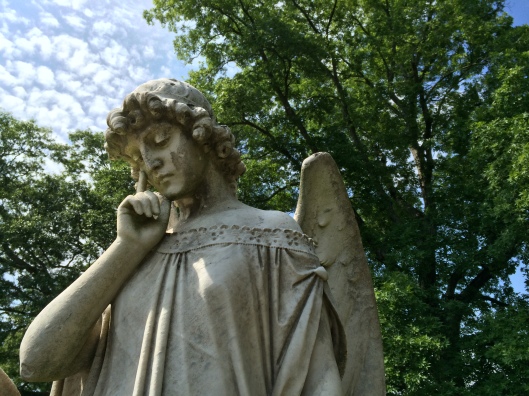 By contrast, this angel seems more forlorn and pensive than the first one. Still, the detail of the lace edge of her gown is eye-catching. 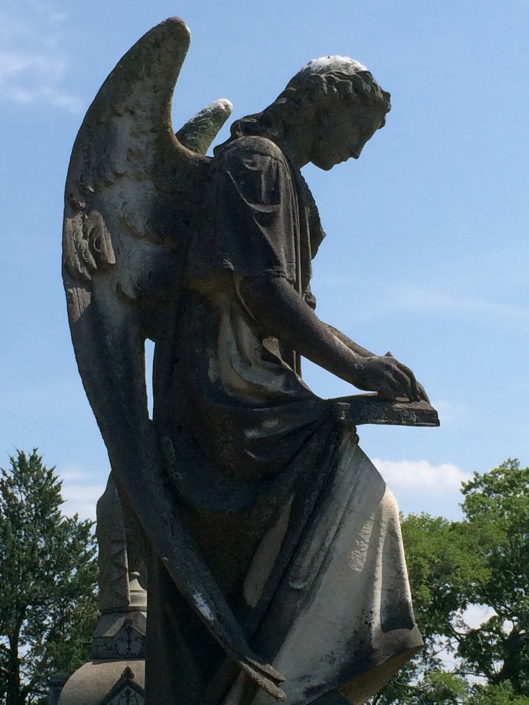 This last angel is lost in thought, her eyes trained on the Bible below. Her wings caught my attention more than her face.

There’s a lot more to Myrtle Hill Cemetery but these are the highlights that I enjoyed the most. High on that list is reuniting with Valerie, who is just as sweet and funny as I remember her being.