Author’s Note: Since I wrote this, I’ve discovered (to my utter shock) that Levi’s oldest daughter, Amanda, was also a resident at the Athens Asylum and for much longer than her father was. Please scroll to the bottom if you want to know more about her.

When I signed up for Ancestry.com, I was excited about the adventure I was about to start. Maybe I’d find out I was related to a king. Or discover that one of my ancestors invented something cool like the swizzle stick (I did not).

Instead, I found out that one of my ancestors is buried in a large cemetery behind what is now Ohio University’s Kennedy Museum of Art.

I was able to contact someone who lives near the Athens area who promised she would stop by and locate his grave. True to her word, she did so and took several pictures. My heart caught in my chest when I saw the cemetery. So many numbers to represent lives lived and lost. So many who died alone, unmourned and misunderstood.

That’s because the cemetery is on the grounds of what used to be the Athens Lunatic Asylum. His name is not on his grave marker. Just a number. 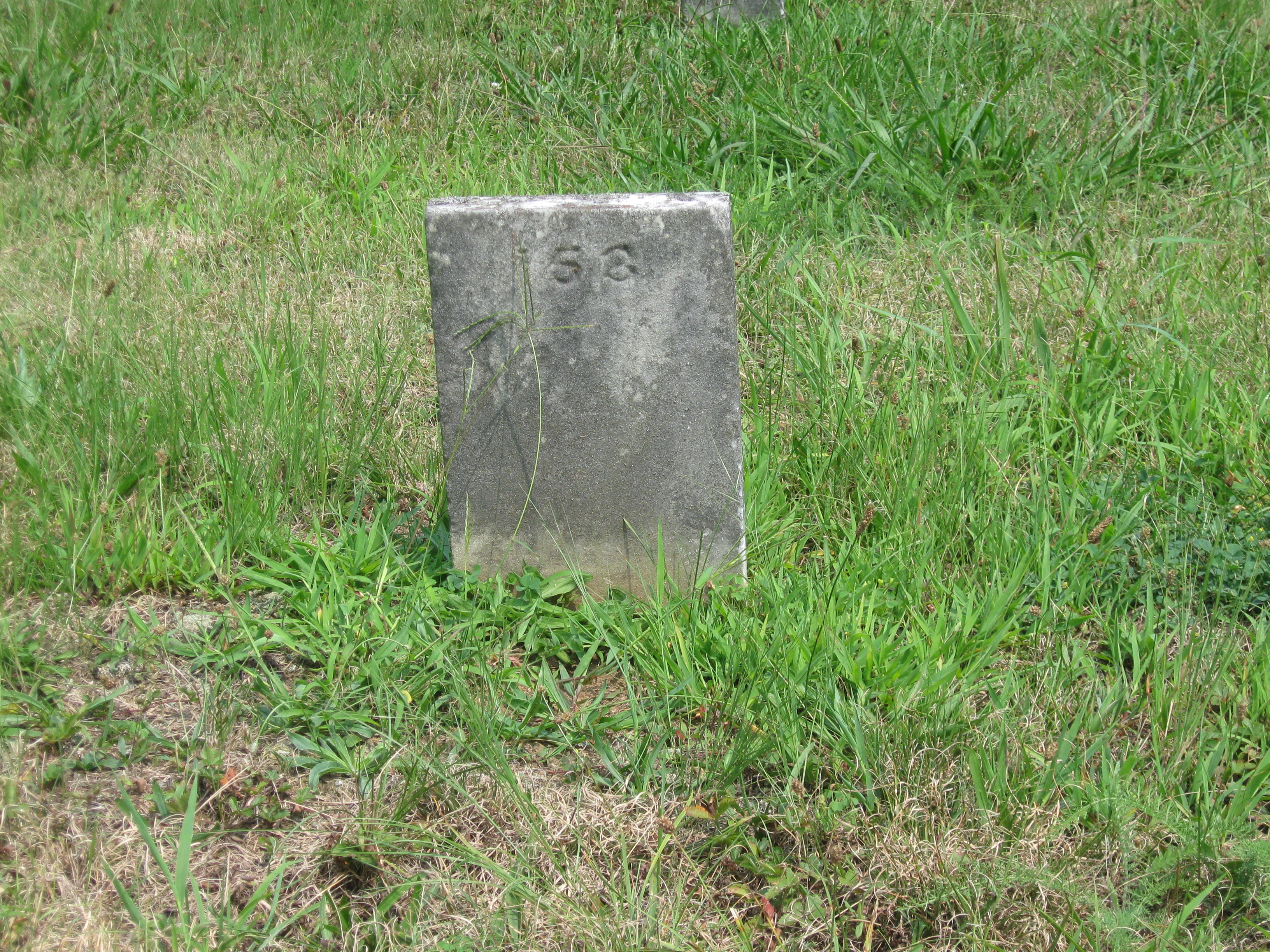 Grave #153 contains the remains of Levi Martin Mercer, a great-grand uncle of mine who died in 1888 at the Athens Lunatic Asylum in Athens, Ohio. My thanks to the Athens County Historical Society and Museum for their assistance. Photo courtesy of Teresa Lemons.

Levi Martin Mercer was born in Mason, Va. in 1808 and grew up in Jackson County, Ohio. In 1828, he married Belinda Melissa Cantwell. The justice of the peace who married them was Michael McCoy, my great-great-great-great grandfather. He was also Levi’s brother-in-law. By 1850, Levi was farming in Hamilton Township, on the South side of Jackson County.

After 1850, something happened. The 1860 U.S. Census lists Levi as living as an inmate in Ward 1 of the Ohio Lunatic Asylum in Columbus, Ohio. He is listed as insane. The same Census lists Belinda as still living in Hamilton Township with their two youngest children (Levi D. and Andrew), farming 200 acres of land.

The Ohio Lunatic Asylum, sometimes called the Central Ohio Asylum, opened in 1838. It covered 30 acres and was purported to be where residents could actually be “cured” of their mental condition. In 1843, the Asylum’s director Dr. William Awl claimed a 100 percent cure rate of his patients.

He didn’t mention that the “cure” often meant the patient’s demise. 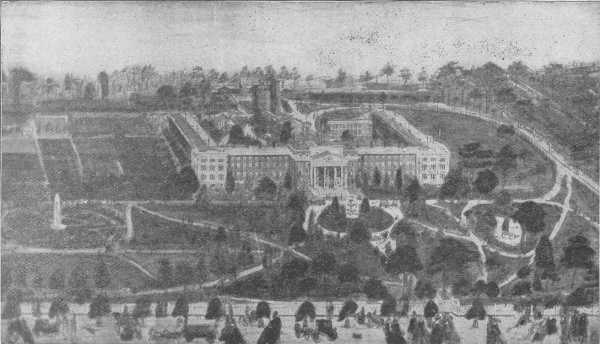 The first Ohio Lunatic Asylum in Columbus opened in 1838. It burned to the ground 30 years later. The cause of the fire remains a mystery.

The Ohio Asylum burned to the ground in 1868. Only seven people did not survive. I don’t know if Levi was still living there at the time of the fire but reports say patients were routed to surrounding facilities during the years that the Asylum was rebuilt. A new, much larger building opened in 1877 with much fanfare. 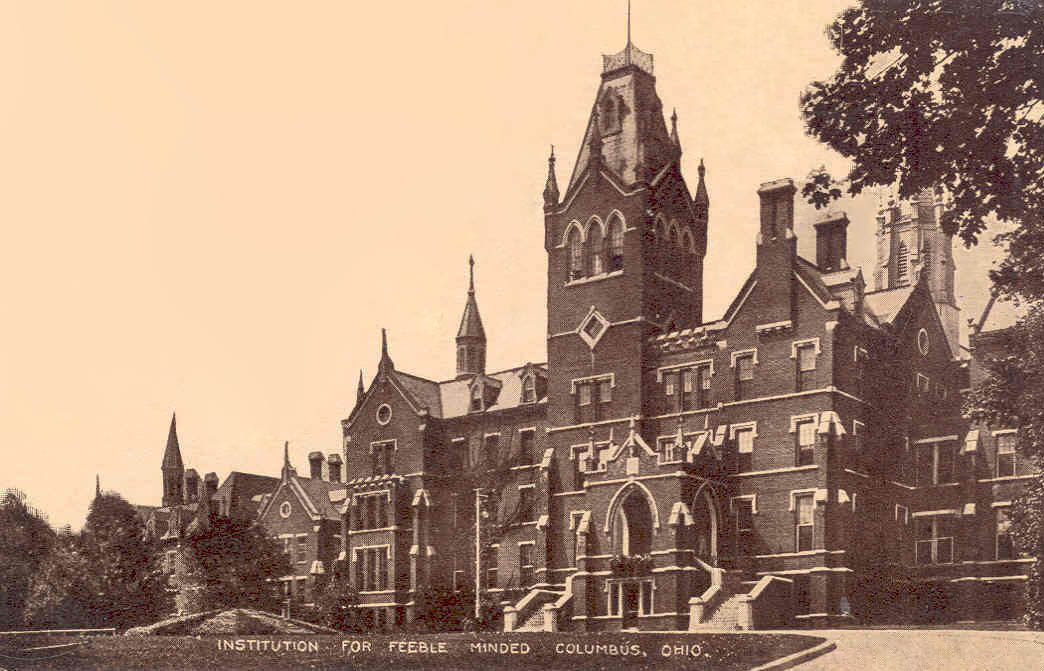 The newly built Ohio Lunatic Asylum opened in 1877, a much larger facility on 100 acres of land in a different part of the city. On this postcard it is called Institution for the Feeble Minded.

The 1870 Census reports Levi as living in Jackson County again, now as a member of the household of “sheriff and jailer” Jonathan Wade. He is still listed as insane.

What many people don’t know about the asylums of this era is that they were not used just for the mentally ill. It was common for families to drop elderly relatives off at the hospital when they could no longer afford to care for them. Parents committed teens for minor acts of rebellion. The homeless used it for temporary shelter. As a result, the Athens Asylum’s population went from about 200 to nearly 2,000 by the early 1900s.

Truthfully, I don’t know what kind of “insane” Levi was. But it was enough to separate him from his wife and children. Belinda died in 1874 and is buried in Glendale Cemetery in Scioto County, Ohio, not far from Jackson County. Daughter Mahala (and her husband) are buried nearby. 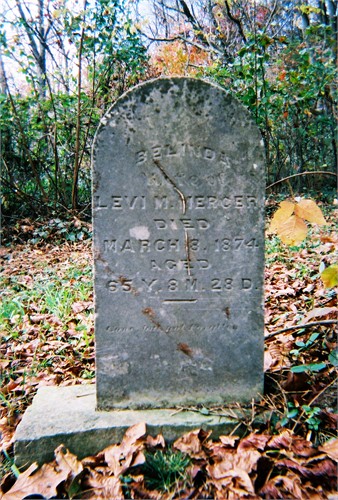 Levi’s wife, Belinda, is buried in Glendale Cemetery in Scioto County, Ohio. She may have been living with her daughter, Mahala, when she died.

In 1880, Levi appears on the U.S. Census for the final time. Still listed as insane, he lived in the household of J.M. Lynch along with his family. Lynch’s occupation is listed as jailer. Also listed is a 13-year-old servant named Elizabeth Spriggs, whose surname crops up frequently in my family tree. 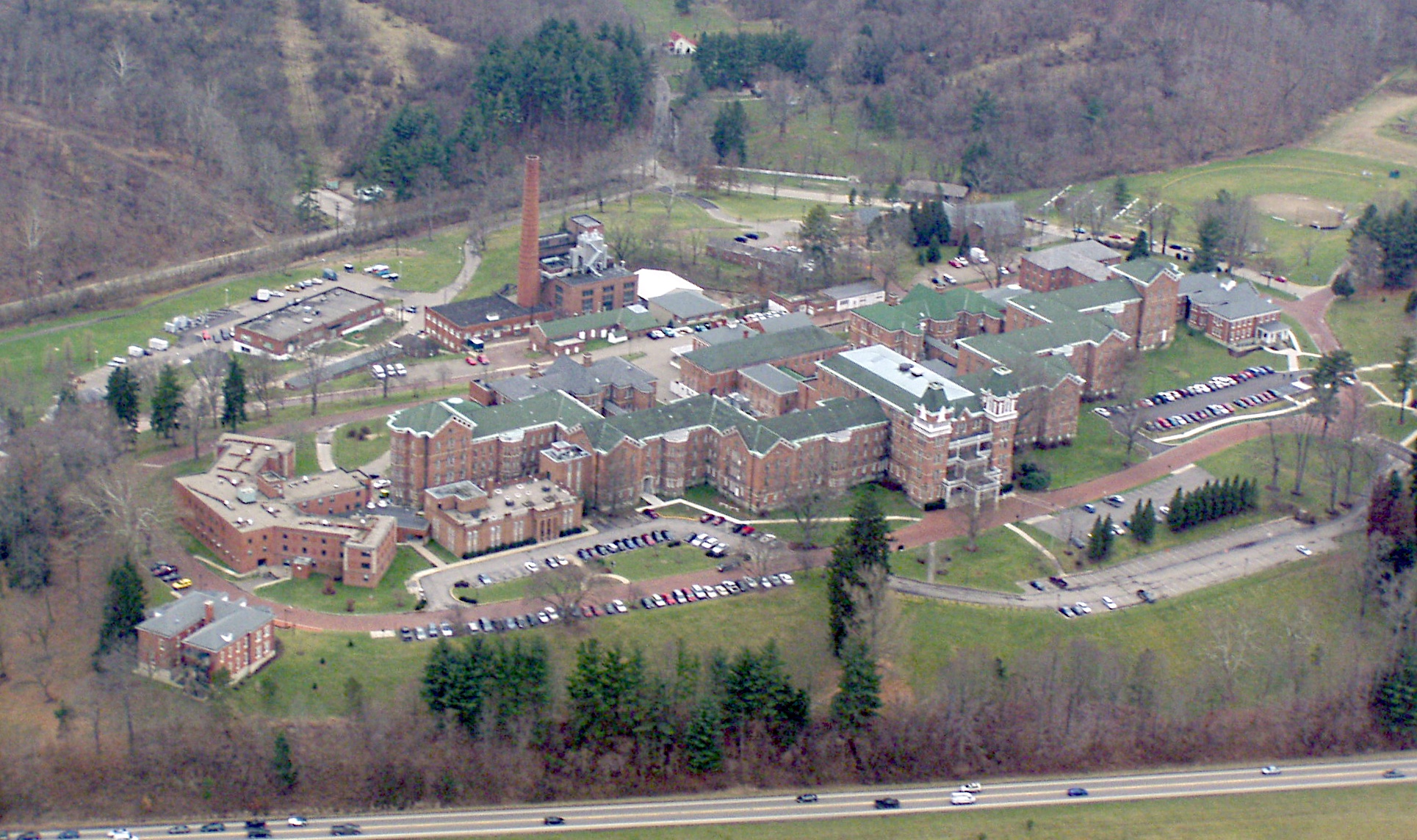 This picture can give you an idea of just how vast the Athens Lunatic Asylum (now called The Ridges) was when it was in full operation. The facility had eight different names over the years. It opened in 1874 and closed in 1993, now owned by Ohio University.

Thanks for some newspaper articles I found, Levi was moved from the jail to the local hospital in 1887. I am guessing his health began to fail. He was moved into the Asylum in Athens in February 1888 and eventually died on Nov. 8, 1888 from some sort of heart ailment. So he was not there for very long. 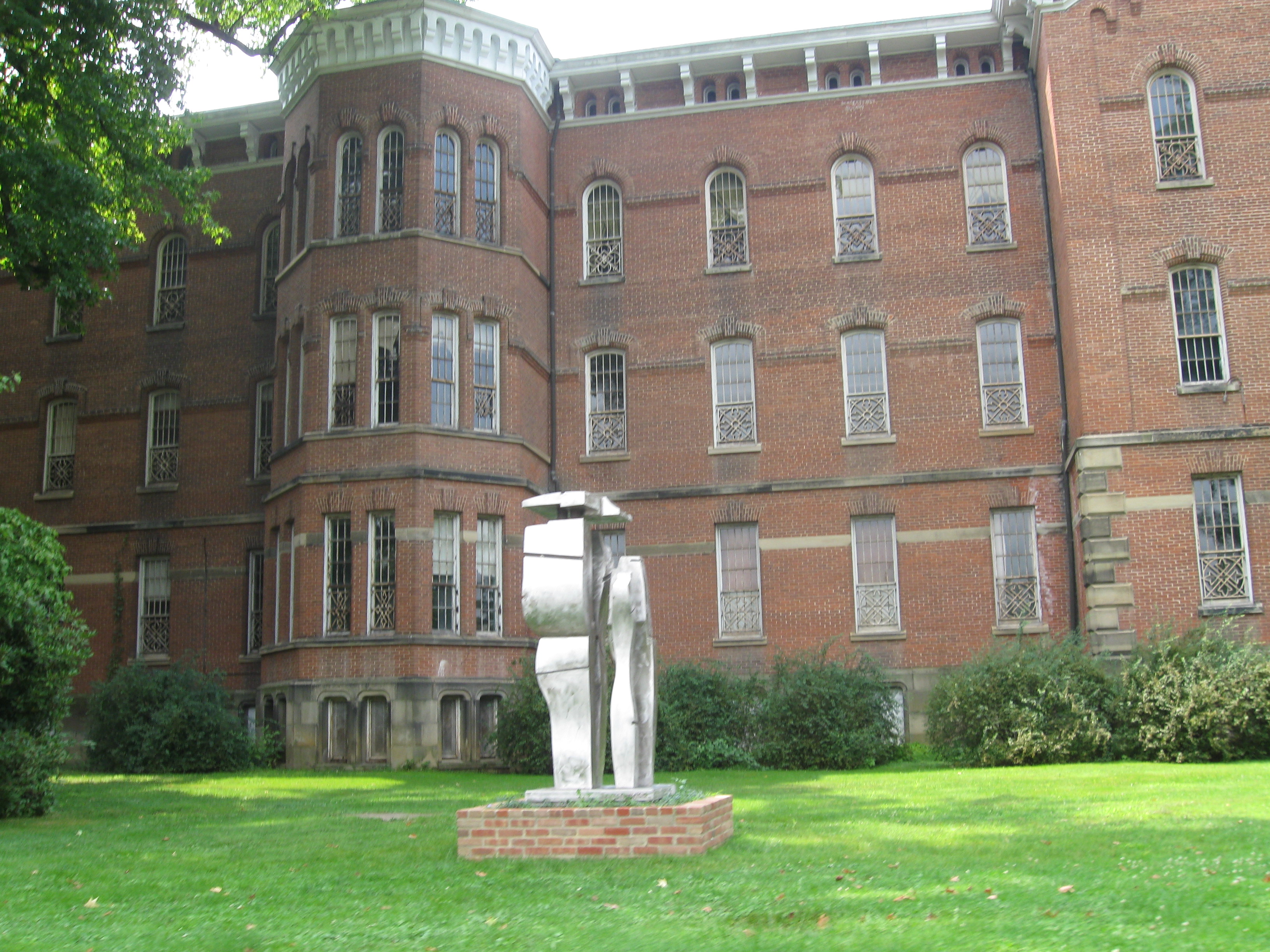 In 2001, renovation work was completed on the main building, which today is known as Lin Hall. It houses music, geology, and biotechnology offices, as well as the Kennedy Museum of Art. Nearly all of the dozens of hospital buildings have been remodeled and put to use by the University. Photo courtesy of Theresa Lemons.

The cemeteries at the Ridges (as it is now called) contain about 1,700 graves of patients who died there. There are mostly numbers. They didn’t start putting names on the graves until the 1940s. So most, like Levi’s marker, only have a number.

The Asylum was closed in 1993, its remaining patients bused to other more modern facilities before Ohio University purchased it.

Some say the place is abuzz with paranormal activity, haunted by the souls who lived there. 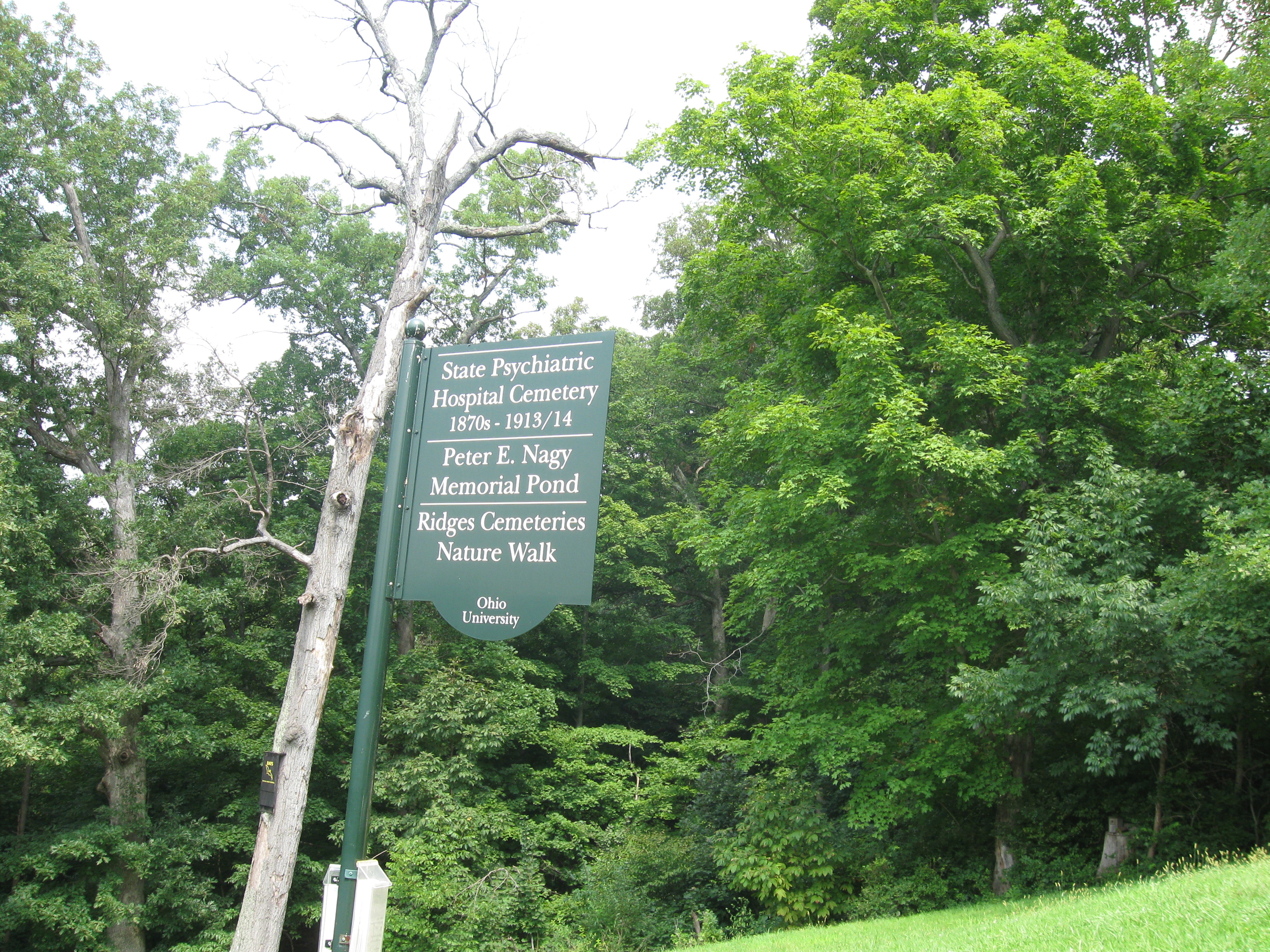 The Athens Lunatic Asylum is now known as the Ridges. There are three different cemeteries on the campus and more is being discovered about the people who lived there. Photo courtesy of Teresa Lemons. 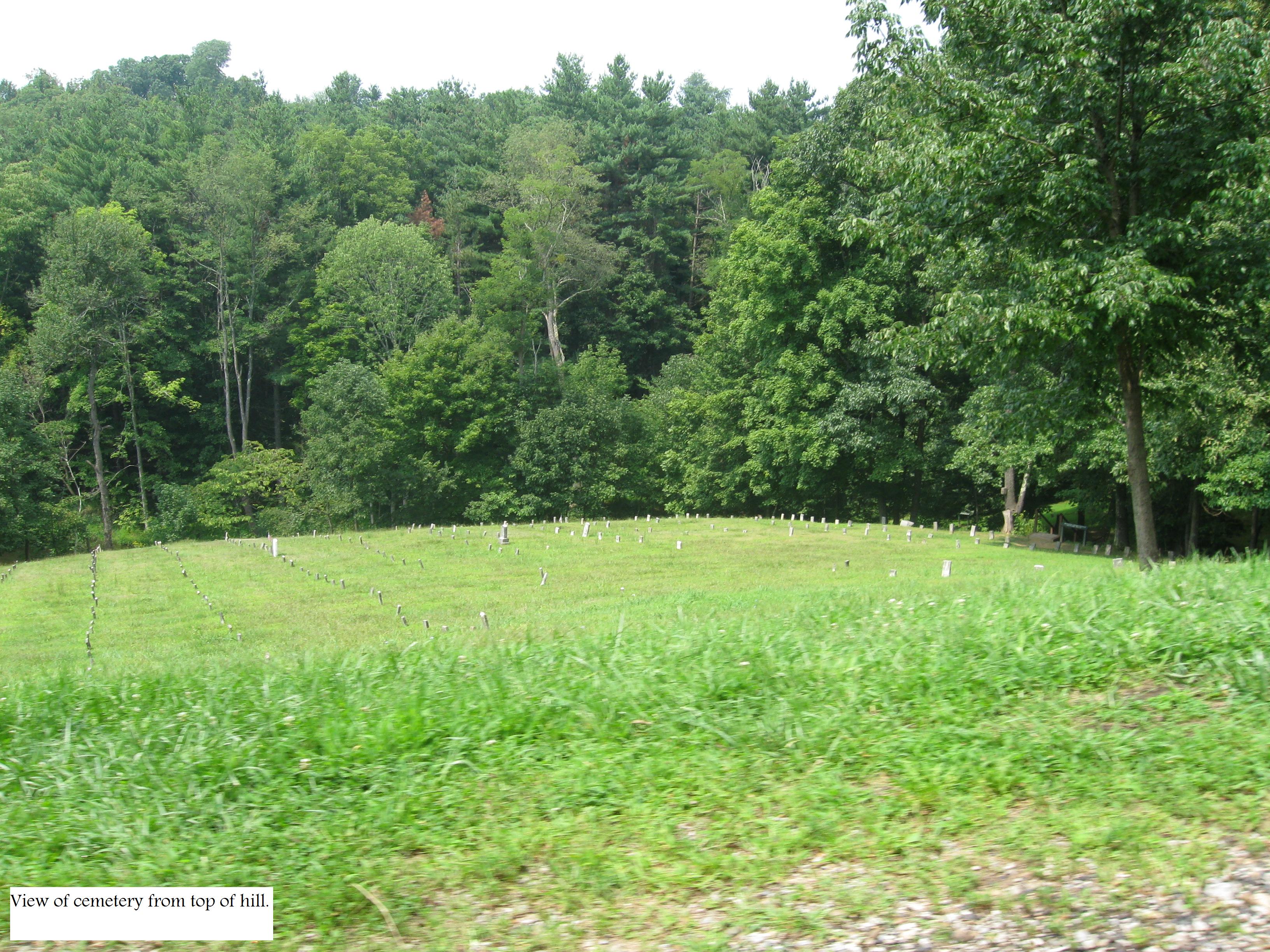 This is the hillside where Levi is buried. A few of the descendants of patients who died here have purchased new markers with names and dates of the deceased on them. Photo courtesy of Teresa Lemons.

The Ridges is a rarity among former asylums that have come and gone. Many fell into decay after closing and had to be torn down. Some had cemeteries that time and the elements destroyed. Many remain a mystery because the shame that went with mental illness was so great in decades past. In some ways, it still is.

The Athens branch of the National Alliance on Mental Illness (NAMI) has spent the last several years cleaning up and repairing the cemeteries, which had fallen into a sad state by the 1990s. There’s also a walking trail.

A group called the Friends of Athens Asylum Cemeteries was formed to help connect the descendants of those buried at the Ridges to their loved ones. They are working to raise funds to put new markers with names and dates on them. To give an identity to those numbers. As it turns out, a number of men buried at the Ridges were military veterans. So far, 43 of the 89 known veterans have received a stone. 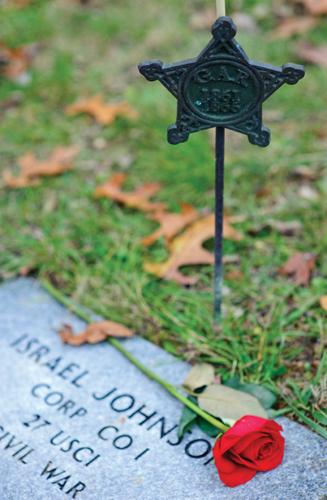 Over 80 veterans from various wars are buried at the Ridges. About half now have markers with their names and dates on them. Photo courtesy of The Post.

I’ve never been to the Ridges but someday I will. I’d like to give Levi a proper marker after all of these years. To give his number a name, an identity. As someone who has struggled with chronic clinical depression since my 20s, I know what it’s like to have the label of mental illness attached to me. Maybe not the way he did. But I understand what that means.

I owe him that much.

I recently learned that Levi and Belinda’s oldest daughter, Amanda, was also a resident at the Asylum. I didn’t even know she existed because she does not appear on the 1850 Census with the other children. Born in 1829, she had married a Jackson County man named Parker Smith in 1848. Parker is listed as being a school teacher in the 1860 Census. He would later become a surveyor.

Amanda and Parker had at least four children together. I found newspaper articles from 1874 reporting that in May she had been judged “not insane” and sent home. But in September 1874, she was judged to be insane and sent to the Asylum. She lived there until her death in early April 1881 at the age of 52. I don’t know what her cause of death is. But she is buried in Cemetery #1 where her father, Levi, is buried. Her grave marker is #13, one of the earliest buried there. I do not yet have a picture.

I hope to find out more about her soon.