When I was a kid, a dog adopted us. He plopped himself down on our front doorstep and promptly fell asleep.

My Dad had no interest in acquiring a dog but when we moved later that year, Peanut Butter came with us. He was a genuine mutt, with a bit of wire hair terrier. He was a mellow soul but tough as nails. He survived a scorpion bite and a nasty run-in with some neighborhood dogs. Maybe a cat gave him a few of their nine lives because he recovered both times. 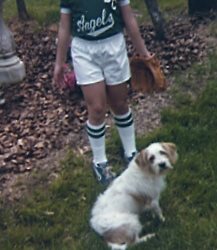 Peanut butter was my best friend in my tween and teen years. He was a faithful friend who loved me unconditionally.

I was with Peanut Butter when we took him to the vet one last time. It was probably the hardest thing I’ve ever had to do. But when a friend as faithful as he was needed help to cross the Rainbow Bridge, you do it. I cried for days afterward.

At that time, there were no pet cemeteries. At least no formal ones. People tended to bury their pets in the backyard (although for goldfish, the toilet was the stairway to Heaven). Makeshift pet cemeteries did crop up here and there. There’s actually a cemetery for coon dogs in Alabama.

Located in Northwest Alabama, the Key Underwood Coon Dog Memorial Cemetery was established in 1937 when a man wanted to honor his faithful dog, Troop. Only coon dogs are allowed to be buried there. Photo courtesy of coondogcemetery.com.

Things have changed since then.

According to the Atlanta-based International Association of Pet Cemeteries and Crematories, just a handful of pet aftercare facilities in the U.S. were in operation less than a decade ago. Today, there are about 700 nationwide, including funeral homes, crematories, and cemeteries. Why?

Some pet funeral directors point to baby boomers, who have increasingly turned to pets for companionship after their spouses die or their children leave home. But in recent years, pet funerals are arranged just as often by people in their 20s and 30s, many of whom chose not to become parents and treat their “fur kids” like their own children. A 2012 Bloomberg Businessweek article goes into more detail.

“You really can’t put your finger on it,” says Ed Martin Jr., director of Hartsdale Pet Cemetery and Crematory in Hartsdale, N.Y. “I used to think this was something for older women who never had children. Or very wealthy people. But we get everybody: men, women, rich, poor, young, old.”

Atlanta does have a pet cemetery (located a bit out of town in Bethlehem) called Oak Rest Pet Gardens. I had never been to a formal pet cemetery before so I decided to check it out.

Oak Rest sits on a large piece of land amid rural fields and new subdivisions. It’s very peaceful and nicely landscaped, but not overly so. Everything from dogs and cats to rabbits, pigs, birds and even horses are buried here. Some of the markers are large and include the pet’s name, birth/death dates and even a picture. Others are a simple brass plate with the pet’s name inscribed on it.

In the center of the cemetery is a special area dedicated to K9 police dogs as well as guide/service dogs. Many of the markers include the police unit the dog worked with. It’s thoughtfully laid out and pays respectful homage to these amazing animals.

Oak Rest’s Garden of Honor is dedicated to the courage and sacrifice of K9 police dogs as well as guide/service dogs. 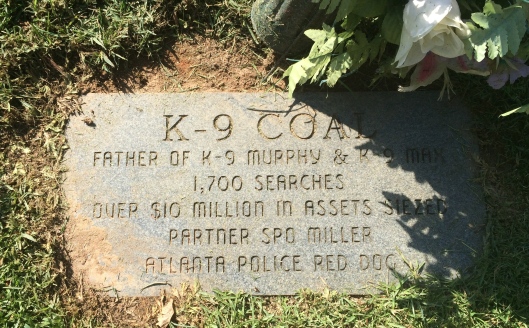 K-9 Coal is just one of several police dogs buried at Oak Rest. Coal was also the father of two very successful K-9s, Max and Murphy, who are buried near him.

K-9 Sheriff was the Atlanta Police Department’s first suicide bomber detection dog. His picture, with his handler, is on his grave. My apologies for the grass bits, the staff had just mowed.

Most of the markers were heartfelt memorials to beloved friends. Some were for multiple pets on one marker. But all of them conveyed an owner’s love for their beloved friend. 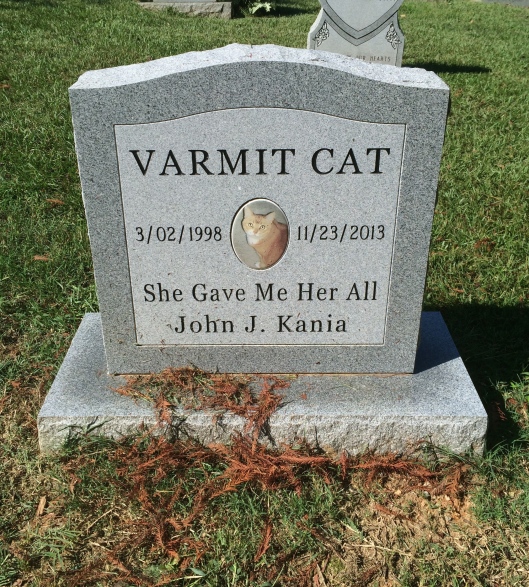 Varmit Cat, who lived to be 15, was the apple of her owner’s eye.

Roamy and Walker appear to have been hunting dogs and litter mates.

There’s also an area dedicated to burying or scattering the ashes of horses called Horseshoe Gardens. 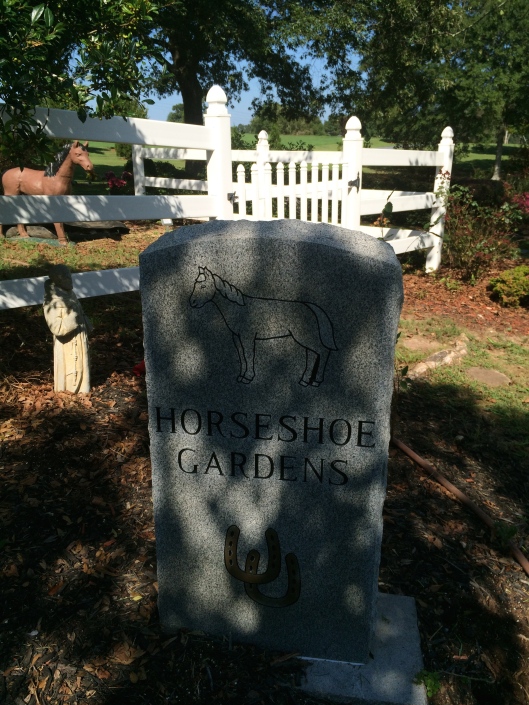 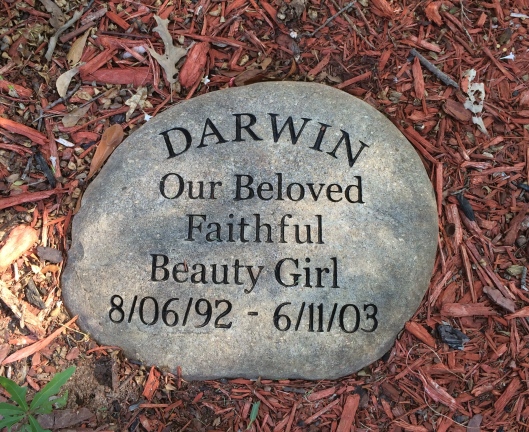 Darwin’s memorial stone is one of several in Horseshoe Gardens.

On many stones, there are only names so you can’t tell for sure what type of animal they were. But in one case, I’m pretty sure it was a pet pig. 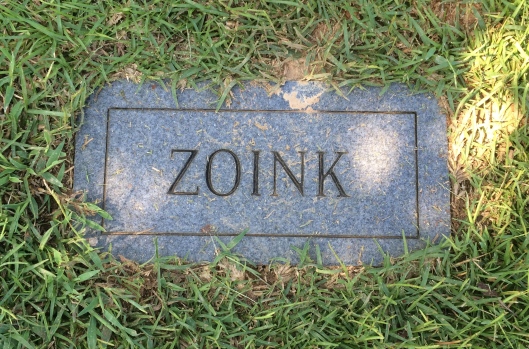 Toward the front, there’s a patch of grass with a number of small plates bearing pet names. They were for cats that had all belonged to the same person.

E.H. Rice loves cats because he or she has honored at least 13 with memorial plaques.

Oak Rest Pet Gardens was the dream of Doyle Shugart, who was a licensed funeral director. With his wife Maudann, he started Deceased Pet Care in 1972 in a small brick building.

The business now consists of four locations (which includes their offices, showrooms, crematorium, chapels and cemeteries). Their web site describes Shugart as “an advocate for pet parents across the nation and a pioneer in the pet aftercare profession.” He passed away in July 2012, but Maudann and their children continue to run the business.

Planning a pet funeral is much like planning one for a person. Oak Rest has showrooms with caskets, vaults, urns and memorial markers. There’s also a chapel available for those wanting to spend a few last moments with their pet. They even provide grief counseling services if needed.

Considering how much unconditional love and companionship our pets give us, providing them with a fitting farewell seems right. For many people, a pet can be the only friend they truly have.