There’s a term in religious circles that describes some Christians of a reserved and stiff nature as being part of the “frozen chosen”.

During the winter, this figure of speech can become a literal expression when it comes to digging graves in Northern states where temperatures hit below zero and harden the snow-covered ground.

Grave-digger, painted by Russian artist Viktor Vasnetsov in 1871,  illustrates what a 19th-century grave digger might have looked like.

Before the invention of the backhoe, there was only one way to dig a grave and that was with a shovel. It could take quite a lot of backbone and energy to accomplish even in warmer conditions. But when the ground froze, it could be nearly impossible.

Often, families simply waited until spring to bury their loved ones. The dead would be placed in what was called a receiving vault, where they might wait a few weeks to a few months for burial.

Westview Cemetery’s receiving vault, built in 1888, held caskets during bad weather when burials couldn’t take place. During the Spanish Flu epidemic in 1918-1919, it was full because of the rising death toll. The vault was sealed in the 1940s when Westview’s Abbey Mausoleum was completed.

Atlanta’s Westview Cemetery has a large receiving vault built in 1888 but it was mostly used for storing the deceased when inclement weather made burial impossible. This was usually due to cold weather or prolonged rain, not snow. When the Spanish Flu epidemic swept the city in 1918 to 1919, the vault was full with victims of the illness.

When Westview’s Abbey Mausoleum was completed in the 1940s, the receiving vault was sealed because the new building had plenty of room to store the deceased awaiting burial.

The practice of holding a casket during cold conditions is still common today for many cemeteries and funeral homes, if they have the facilities to handle it. A cemetery can place them temporarily in a mausoleum while a funeral home can store the dead if it has refrigeration on site. In general, most funeral homes don’t make a practice of keeping the deceased in refrigeration longer than two weeks.

These coolers sold by U.S. Cooler Co. in Quincy, Ill. are typical of the kind used by mortuaries and funeral homes to store bodies. Photo courtesy of U.S. Cooler Co.

Spring burial is taken for granted in states like North Dakota, according to a 2011 Associated Press article. Dale Niewoehner, president of North Dakota’s Board of Funeral Service, said hundreds of burials are suspended each year at some cemeteries there after the snow comes. To him, delayed burials are a “necessary evil” in North Dakota. “It’s just how it is here,” he commented.

Wes Burkart, owner and funeral director at Thompson-Larson Funeral Home in Minot, N.D. said his funeral home has as many as 70 delayed spring burials each year. He admits the delay can potentially prolong the grieving process.

“Having a family go through a second service and having them waiting and waiting can be very difficult,” Burkart said. “I hate to use the term `unfinished business’ but that’s what it is.”

This photo of snow-covered North Dakota Veterans Cemetery in Mandan shows how difficult conditions can be for digging graves in the winter. Photo by Dustin White.

North Dakota funeral directors say a law requiring them to have winter burials would be impractical if not impossible for the hundreds of small rural cemeteries scattered across the sparsely populated state. Just plowing the country road to get to the cemetery can be an arduous task.

But in states like Minnesota and Wisconsin, state law requires them to dig graves amid the harsh winters.

Thankfully, technology makes it less back breaking to dig through the top layers of frozen soil. At a cemetery in Henning, Minn., gravedigging brothers Matt and Andrew Goeden use jackhammers powered by an air compressor to break through the frozen soil, which can often go as far as four feet deep.

“We do about a foot of frost an hour with the jackhammer, but the more frost there is, the longer it takes. Four feet doesn’t take four hours, it takes more like six hours,” Matt Goeden explained in a 2014 CNN segment.

Sometimes they use a little non-mechanical help in the form of a heater. “Light a couple bags of Kingsford charcoal, put a couple pieces of plywood over the top and come back the next day. Make a little oven out of it and that’ll knock the rest of the frost out of it,” Matt said.

Backhoes also do the lion’s share of winter grave digging. At Highland Memorial Park Cemetery in New Berlin, Wis., E. Glenn Porter III’s crews take a different tack. They fit the bucket of a backhoe with a pair of “frost teeth” — curved metal arms several feet long with carbide tips that, combined with the power and leverage of the backhoe, are strong enough to break the frozen ground.

“The width of the teeth is exactly the width of our grave, so I can set up once and then just dig along the long dimension of a grave until I get below the frost,” Porter said. “I also cut across the short direction twice, just so that I get smaller pieces … to break out.”

One of the more recent innovations in winter grave digging is the ground thawer. They resemble oil barrels cut in half lengthwise, then fitted with smokestacks and a hole for a torch. You place the barrel open-end down over the grave site, insert a propane-powered torch and pump heat into the dome. When you return 24 to 30 hours later, you can then scoop out the now-soft dirt with a backhoe. 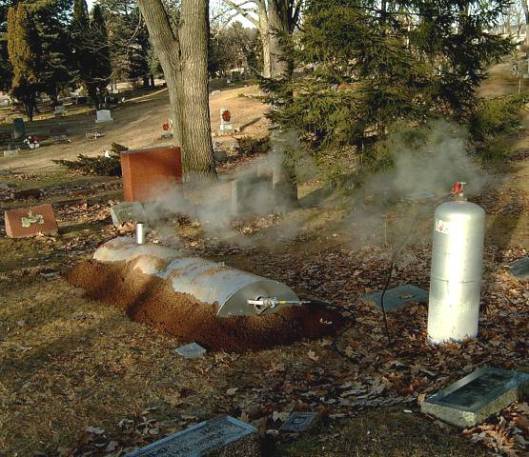 This is an example of a grave thawer that resembles an oil barrel. Propane is used to heat the barrel which in turns, thaws the ground to make it easier to dig.

A more sophisticated version is made by ThawDawg and sold through Ground Specialties, Inc. based in Milaca, Minn. It, too, operates via propane tanks. ThawDawg’s website states these units can fit in the back of a truck and be set up/taken down by one person. I could not find a cost online for them.

The ThawDawg ground warmer can fit into tight spaces that a backhoe cannot, preparing the frozen soil for easier digging. Photo courtesy of Ground Specialties, Inc.

In Creston, Iowa, Graceland Cemetery’s superintendent Bruce Hodge is a fan of them, having used the barrel thawers in the past. “You get the wind blowing with that LP burner and it’d blow it out,” said Hodge. “I just decided there had to be a better way.”

To make the dirt soft enough to dig, the blanket usually has to remain on one plot for 12 to 18 hours, depending on how deep the frost is. It can thaw approximately 10 inches deep every four or five hours, if conditions are favorable.

Graceland Cemetery superintendent Bruce Hodge uses a ground thawing blanket, powered by a generator, to soften the frozen soil to dig a grave. Photo courtesy of the Creston News Advertiser.

RapidTHAW sells a 4.5 foot by 15-foot ground thawing 110-volt outdoor electric blanket for $685.00. Larger ones can sell for over $1,000 depending on the size. Cemetery crews are finding these blankets to be a less cumbersome and more fuel efficient option.

So whether you choose a jackhammer, “frost teeth” or an outdoor electric blanket, grave digging through hard winter soil isn’t quite as difficult for the “frozen chosen” as it used to be. 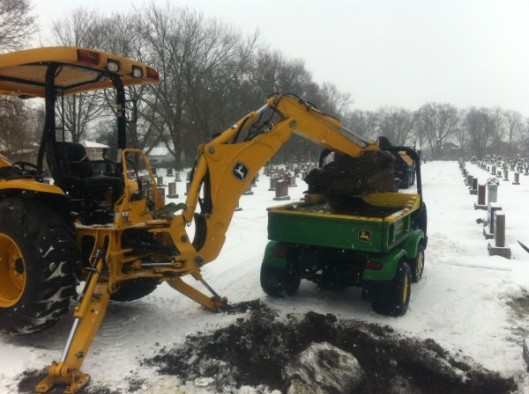