Last week I wrote about the Bios Urn, a biodegradable container that holds a tree seed that you add human cremains (ashes) to before planting it in the ground. The symbolism this evokes is that when you die, you can become a tree.

During my research, I came across another novel (if not unsettling) concept that is getting attention: the composting of human remains. Yes, you read that right. The notion of taking a human body and turning it into compost you can use in soil is on the drawing board.

You know what that immediately made me think of, don’t you? 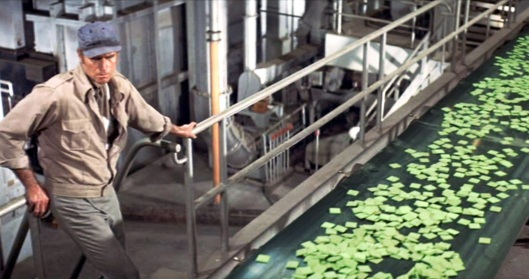 Richard Fleischer’s 1973 film immortalized the cry of “Soylent Green is people!” Set in 2022, Charleton Heston plays Detective Frank Thorn, a sardonic cop who discovers that the food chips called Soylent Green are not made of plankton but actual human beings.

Soylent Green, a futuristic film set in 2022, is about how a renegade cop (played by Charleton Heston) discovers that the food provided by the government called Soylent Green is not made of the plankton it is said to contain. Soylent Green is actually made from the protein found in human bodies. By the movie’s end, a screaming Charleton (“Soylent Green is people!”) is being carried away while the crowd watching thinks he’s lost his marbles.

The kind of human composting being proposed now does not involve creating little green squares for direct mass consumption. But it does mean turning a human body into compost that can be used in real soil to grow edible plants and ornamental trees/flowers.

Katrina Spade, an architect based in Seattle, Wash., founded the Urban Death Project. I am borrowing liberally from an article by Brendan Kiley about human composting that goes into great detail about her ideas. She came up with the idea in 2011. 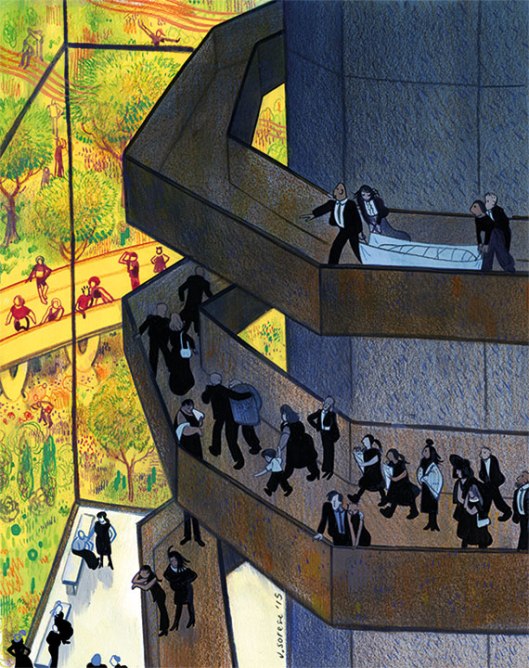 This illustration from Brendan Kiley’s article shows how loved ones would proceed up a winding ramp to the “core” where their loved one’s body (wrapped in a shroud) would be placed in a bay, followed by a ceremony held to honor their life. Illustration by Jeremy Sorese.

Spade envisions building a three-story building where mourners could bring their dead. Friends and family would go with the unembalmed departed (wrapped in a shroud) up a circular ramp to the top of the “core,” or central decomposition chamber. What follows could be a type of ceremony during which the body would be placed into a mix of wood chips, straw and other organic material.

The core where the body is placed would be divided up into 10 “bays” — similar to elevator shafts — with several bodies in various stages of decomposition in each bay, separated from the bodies above and below by several feet of wood chips. Gravity and microbial activity would time the speed of each body’s descent.

After a few weeks or months (this is still being researched), loved ones would return to the building to pick up the remains, which have become an organic substance consisting of partially or wholly decayed vegetable or animal matter (also known as humus with one “m”, not the hummus made of chick peas). They could then use it to fertilize their own garden or leave it there to be used on the gardens surrounding the facility. 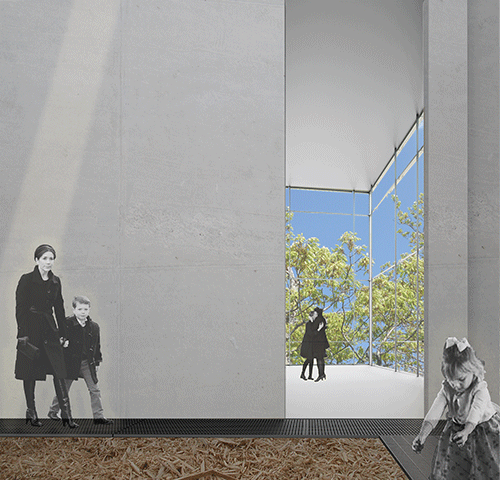 Spade’s concept includes as much or as little human involvement in the preparation of the body as desired. The UDP web site says loved ones are encouraged to be part of the process of preparing the body for the procession and placement into the bay with the wood chips/organic material. Illustration courtesy of the UDP website.

Spade refers to this process as being “cremation by carbon”.

Kiley’s article includes an interview with soil scientist Lynne Carpenter-Boggs. She states that based on the elemental composition of human bodies, the compost from a 200 lb. person could produce six pounds of nitrogen, two pounds of phosphorus, and one pound of potassium. These are  three nutrients typically listed on fertilizers.

“I know this is going to be an offensive simplification of the value of a human body,” she says. “but one could compare the fertilizer value to 100 pounds of cottonseed meal.” 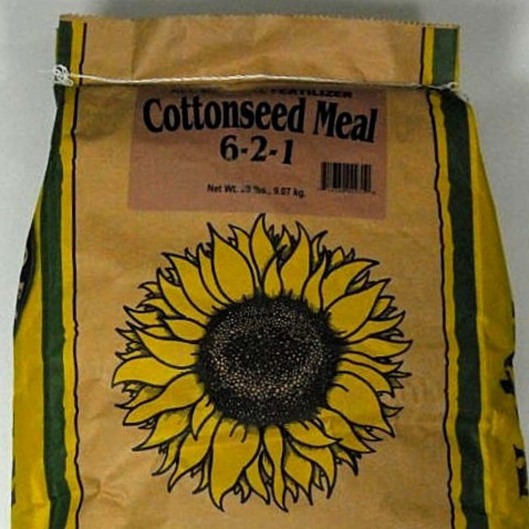 Soil and crop scientist Lynne Carpenter-Boggs likens the compost created by the human body to the fertilizer value  of 100 pounds of cottonseed meal. Photo courtesy of Harmony Farm Supply and Nursery.

How long it takes for a human body to decompose has been studied in recent years by places like the University of Tennessee’s “Body Farm” (which inspired the popular Kay Scarpetta mysteries). Spade did travel to Western Carolina University, which has a similar facility, to see how scientists are studying the natural decomposition of human remains in the outdoors

But doesn’t this process create a foul smell?

Spade said in a recent interview, “There is no smell. And that’s going to be accomplished by a number of ways, primarily through biofilters in the system. A good compost pile really doesn’t have much of an odor, and that’s because there’s a right mix of nitrogen and carbon and moisture and oxygen.” 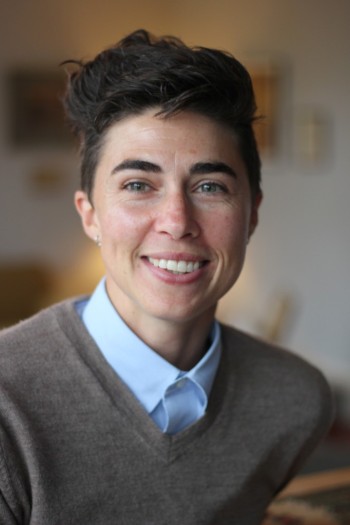 Raised in rural New Hampshire, Katrina Spade’s family raised animals for slaughter and grew vegetables. Each household had compost piles. “We knew where our meat was coming from, where our vegetables were coming from.” Photo courtesy of National Public Radio.

Having received an $80,000 grant from the global non-profit Echoing Green to further develop her ideas, Spade hopes to get the operation up and running within the next few years. While the UDP has architectural designs for a potential facility, they need funds and a site upon which to build it.

The project will also have to overcome significant legal and regulatory hurdles. State law requires that all human remains be buried, cremated, donated to science or transferred out of state. The UDP would also have to get a license to operate a funeral home, according to the Washington state Department of Licensing. Local zoning restrictions, which require composting facilities to be outside populated areas, would also come into play.

Another more esoteric issue that arises from human composting is anonymously becoming a collective part of the soil along with hundreds of other people instead of burying an individual. I fully concede it’s something I can’t personally embrace. But others seem to like the idea quite a lot.

Spade admits that this communal pile, instead of individual plots of land or a special urn, is a psychological leap. “I’m asking people to accept that we don’t all need our own space when we die.” 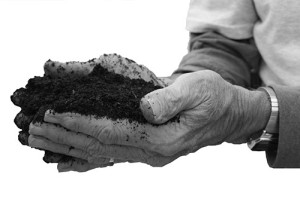 Using compost that came from the body of a loved one interests some but makes others uncomfortable. “People love the idea of growing trees. They get really squeamish with tomatoes,” Spade quipped in a 2014 Reuters article.

I understand that the practice of placing a body full of embalming fluid in a metal container in the ground is distasteful to many people and not exactly eco-friendly. But using compost that was once my Uncle George (and other people near him) so I can produce prize-winning tomatoes that can go into my salad is not one I can stomach either.

Many people I talk to say “I’m going to be dead so what does it matter?”. That opinion has merit and I understand it. But the unique rituals of the funeral and burial (which can be “green” and impact the earth more gently) are for the living, not the dead.

After my death, I want to leave my loved ones a place and a way to remember me if they choose. I don’t want to be taken to a “core” and composted with dozens of strangers.

And since I have a “black thumb” in the garden, even compost made from Uncle George wouldn’t help any tomatoes I planted survive. 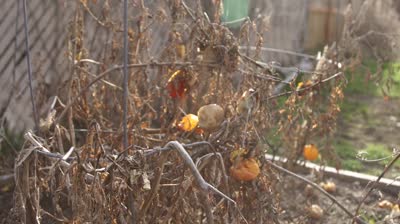