For some time, I’ve been aware of the dilapidated state of a cemetery in Northwest Atlanta but haven’t had the courage or companion to visit it. Located inside the I-285 Perimeter at the intersection of Hollywood and Hightower Roads is Hollywood Cemetery.

Because this area is known for its rough edges, I’d been told not to go alone. In addition, the place is so often overrun with vegetation, the best time to go is from late November through March. Not exactly prime weather time.

But last week, my friend and fellow cemetery hopper Cathy and I met up so we could visit Hollywood together. She brought her machete (for cutting away vines and our personal protection) and we headed over. 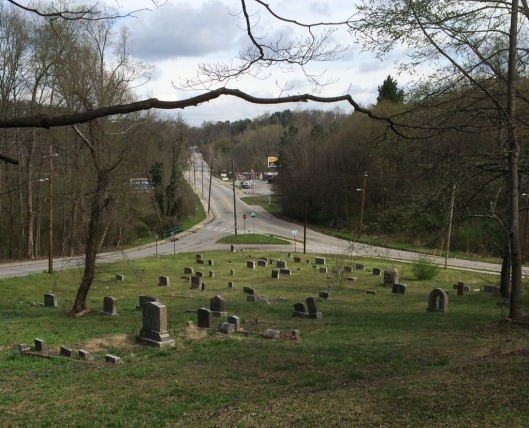 This is a view of where Hollywood Road and Hightower Road split at the terraces section. If you only saw this picture, you’d think Hollywood was in fine shape. But the majority of graves are hidden in the woods on the left and right side of it.

Hollywood Cemetery opened sometime in the early 1890s, lauded as a picturesque alternative to Oakland and Westview Cemeteries. It featured a terraced landscape and was easily accessible by streetcar. The neighborhood was considerably more well heeled at the time.

The story of how Hollywood went from a grand cemetery to a ruin is complicated and I don’t know all the facts. It’s currently owned and “maintained” by Lincoln Cemetery, who also owns the adjacent Magnolia Cemetery (in poor shape but still mowed) and Monte Vista Cemetery (which is well maintained and still sells plots). You can read more about that in this article.

To put it in a nutshell, much of Hollywood’s history is shrouded in rumors and question marks. What is clear is that it’s a big mess.

Cathy and I spent the first few hours negotiating the terraced level of Hollywood, which is easy to navigate compared to the jungle-like areas across the street. Some graves are broken, others knocked off their bases. Some are hidden from sight. This picture of a stairway can give you a glimpse of what it might have looked like in better days.

It’s hard to imagine being able to negotiate this stairway even in better days since the steps are so narrow.

It’s not until we went over to Gun Club Road and up into the woods that we saw how truly bad things are. 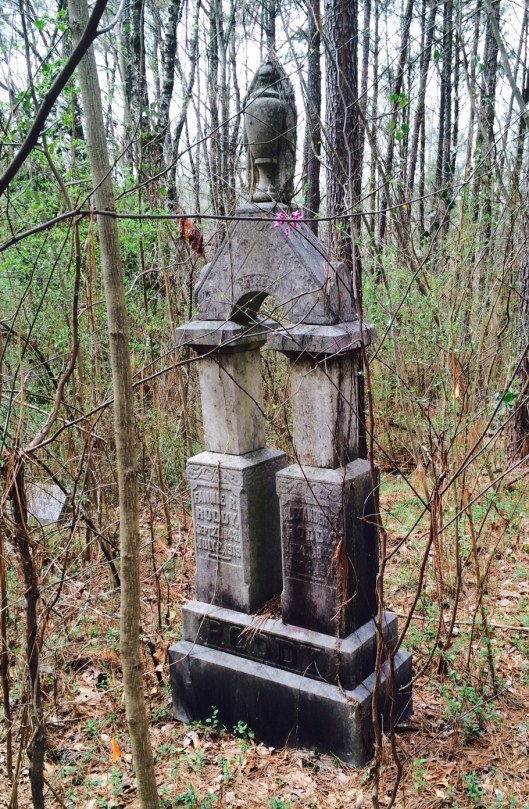 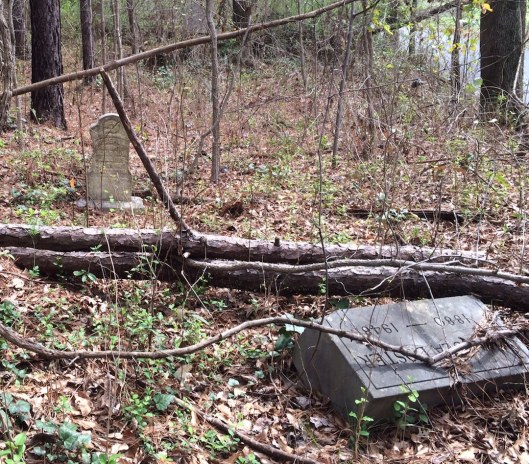 Hiking through the vines, thorns, trees and fallen branches was no easy task. I can’t imagine what it’s like during the summer when it’s hot and insects are in full throng. I’m thankful neither one of us encountered a snake or stepped in a hole (although we did see a decomposing deer carcass).

But it was when we encountered this monument amid the trees that we both stopped in stunned silence. 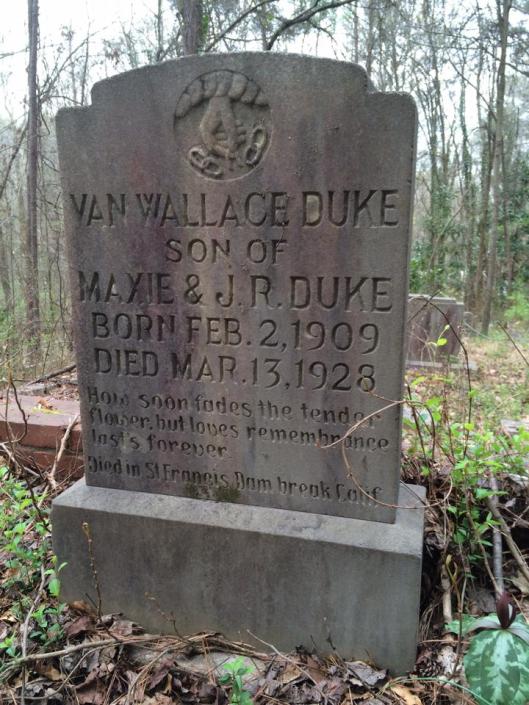 Sitting quietly forgotten among the vines and branches is the grave of Van Wallace Duke, an adventurous young man whose life was cut short by tragedy thousands of miles from home.

Inscribed on the grave of 19-year-old Van Wallace Duke are these words:

After we finished up and had lunch at nearby Hotty Hawg’s Smokin’ BBQ (which I highly recommend), I headed home and hit the Internet. Thanks to Ancestry.com, I was able to find out quite a bit about Van Wallace Duke and his older brother, J.R. (whose granddaughter gave me permission to share her photos and family stories).

This is a portrait of J.R. and Maxie Duke, who were 17 years apart in age. Maxie died at the age of 31, leaving behind five children. J.R. died seven years later. Photo courtesy of the Duke family.

Van was the youngest son of John (J.R.) Duke, Sr. and Maxie Isala Wallace Duke. Maxie died in 1910 when Van was still a baby. J.R. was a freight train conductor in Atlanta and died in 1917. Obituaries state that both parents were buried at Hollywood but their graves have not been found.

Van’s older brother J.R., Jr. lied about his age and joined the U.S. Cavalry, serving with General John J. Pershing from 1916 to 1917. Family history states they were pursuing Poncho Villa into Mexico when they were called back by the start of World War I.

Older than his brother Van by 12 years, J.R. Duke Jr. lied about his age to join the U.S. Cavalry. He told his family years later, “You always took care of your horse first! Before you ate, before you got water, you fed and watered your horse.” Photo courtesy of the Duke family.

By 1928, J.R. was working as a foreman for the Southern California Edison Company. He invited his younger brother, now 19, to come out and join him. Van, in Georgia living with older sister Leona and her husband, jumped at the chance and headed to California by himself. He rode his bike or caught rides, working his way across the country alone.

This is a picture of Van Wallace Duke with his sister-in-law, Bernice, after he arrived in California from Georgia. Photo courtesy of the Duke family.

When Van arrived in California, he must have been awed by the newly constructed St. Francis Dam. As a curved concrete gravity dam, it was built to create a large regulating and storage reservoir for the City of Los Angeles and was an integral part of the city’s Los Angeles Aqueduct water supply infrastructure. It was located in the San Francisquito Canyon of the Sierra Pelona Mountains 40 miles northwest of Los Angeles near the present city of Santa Clarita. 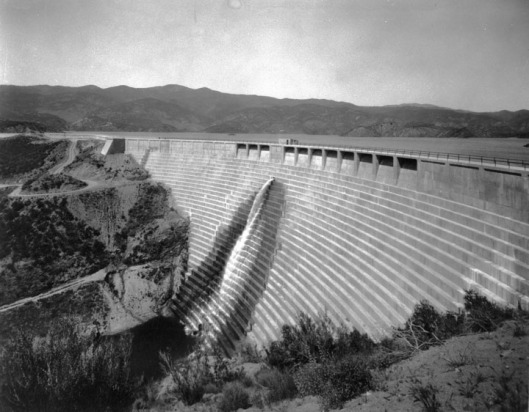 Built between 1924 and 1926, the St. Francis Dam had issues from the start. William Mulholland, its chief engineer and general manager, was blamed for its ultimate failure.

As the Duke brothers toiled for Southern California Edison, they were quite familiar with the dam since the work they did was just below it. The dam’s chief engineer and general manager was William Mulholland, a native of Belfast, Ireland who garnered much respect for his experience. At 600 feet long and 185 feet high, the dam had a 12.5 billion-gallon capacity. 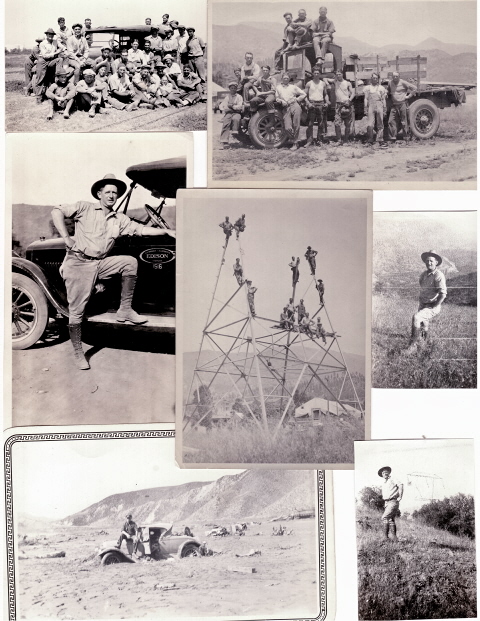 This collage of photos features Southern California Edison foreman J.R. Duke Jr. during his days in the San Francisquito Canyon. The picture on the bottom left was taken after flood. Photo courtesy of the Duke family.

On March 12, J.R. laid off many of his workers (including Van) because their work was almost finished. However, instead of leaving, most of the men stayed a final night to play cards and relax. Van was one of them. That decision would cost many of them their lives.

Just a few minutes before midnight, the St. Francis Dam broke. J.R. barely escaped by riding a tent above the waves, jumping to the shore and clinging to it with all his might. He told his family later that he was stripped of all his clothes and his fingernails were torn completely off his fingers.

As the dam collapsed, 12 billion gallons of water surged down San Francisquito Canyon in a dam break wave, destroying everything in its path. The water flooded parts of present-day Valencia and Newhall before turning west into the Santa Clara River bed. It continued west through Santa Paula in Ventura County, emptying victims and debris into the Pacific Ocean at Montalvo (54 miles from the reservoir and dam site).

This fragment was all that remained after the St. Francis Dam broke a few minutes before midnight on March 12, 1928. Photo courtesy of Caroline and Glenn Marshall.

When the surge reached the ocean at 5:30 a.m., the flood was almost two miles wide, traveling at a speed of five miles per hour. Bodies of victims were recovered from the Pacific Ocean, some as far south as the Mexican border. An estimated 600 people were carried away by the flood, including Van Wallace Duke.

According to his family, J.R. had the heart-wrenching job of identifying the dead bodies of his workers and his brother. Many bodies were never recovered. 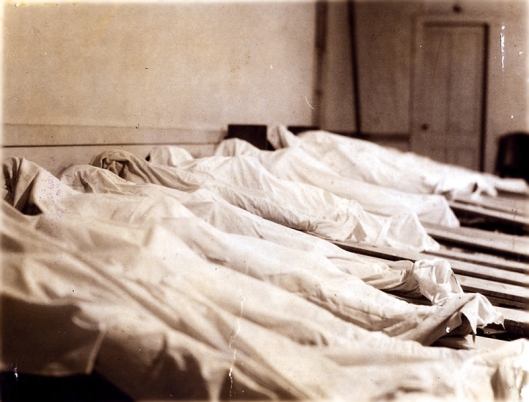 At least 78 bodies were taken to the Masonic hall at Railroad Avenue and Market Street in Newhall, which was converted into one of several makeshift morgues along the St. Francis floodpath. Photo courtesy of SCVhistory.com.

The collapse of the St. Francis Dam is considered to be one of the worst American civil engineering disasters of the 20th century and remains the second-greatest loss of life in California’s history, after the 1906 San Francisco Earthquake and fire.

Van’s body was brought home to Atlanta and he was buried in Hollywood Cemetery. J.R. spent the rest of his life in California with his wife, Bernice, and they had one daughter. He died in 1984 and is buried in Visalia Public Cemetery in Visalia, Calif.

U.S. Rep. Howard “Buck” McKeon introduced H.R. 5357, the Saint Francis Dam Disaster National Memorial Act, in July 2014 but it failed to pass. This would have created a memorial to the estimated 600 victims of the flood. Currently, U.S. Representative Steve Knight is trying to get it passed again. You can read more about how you can help here.

As I pondered the story of the Duke brothers, I thought of my recent posts on the Bios Urn and the potential composting of human remains. Those are exciting prospects for some people.

But when you stumble upon a piece of history such as Van Duke’s grave stone, which tells about his life in a few simple words, a window to a moment in time is opened. A life ended by a dam’s collapse thousands of miles away. The fates of two brothers from Georgia, determined by a hand unseen, but whose effects were felt for decades afterward.

This is why cemeteries matter. Even if they are hidden under a mass of leaves and vines.

What other amazing stories rest unknown and unseen in Hollywood Cemetery? 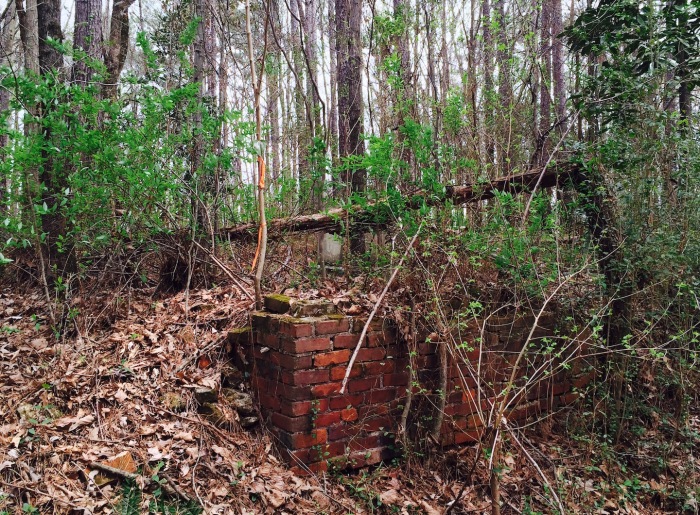 51 thoughts on “Hollywood Cemetery’s Buried Treasure: The Story of the Duke Brothers”