Last week, I introduced you to some of the history of Atlanta’s South-View Cemetery and featured a few of its more notable residents. Today, we’ll continue on our tour.

On the far side of the cemetery, John led me to the grave of one of Atlanta’s most successful businessmen. The story of how he went from a slave to Atlanta’s first black millionaire is well worth telling.

Born into slavery in 1858, Alonzo Franklin Herndon was the son of his white master, Frank Herndon, and a slave, Sophenie. Like many former slaves after the Civil War, the Herndon family (Alonzo, his mother, maternal grandparents and brother) became sharecroppers. Herndon worked as a farmhand in his teens and learned the barbering trade, opening his first shop in Jonesboro where he developed a thriving business.

Alonzo Herndon with his mother, Sophenie, and his brother, Thomas, around 1890. Herndon wrote, “My mother was emancipated when I was seven years old and my brother Tom five years old. She was sent adrift in the world with her two children and a corded bed and…a few quilts.” Photo source: The Herndon Home

After Herndon settled in Atlanta, he worked in a shop owned by William Dougherty Hutchins and later purchased half interest in the shop. By 1904, he owned three shops in Atlanta. His famous “Crystal Palace” shop at 66 Peachtree Street was advertised as the largest and best barbershop in the region.

Following racial practices of the time, African-American barbers served an exclusively white clientele composed of the city’s leading lawyers, judges, politicians, and businessmen. As Herndon’s success grew, he invested in real estate in Atlanta and in Florida.

In 1905, Herndon purchased a failing mutual aid association, which he incorporated as the Atlanta Mutual Insurance Association. The small association expanded its assets from $5,000 to more than $400,000 by 1922. In the same year, the company became the Atlanta Life Insurance Company and achieved legal reserve status, a position enjoyed by only four other black insurance companies at that time. 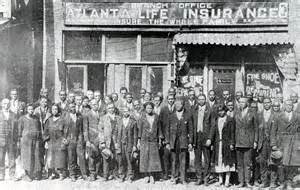 In the 1920s, Herndon expanded Atlanta Life into a half dozen new states. Seeking to save failing black enterprises whenever possible, he re-insured policyholders and merged the faltering business into Atlanta Life to maintain confidence in black businesses while saving jobs for African-Americans.

As a result of Herndon’s wealth and business stature, the African-American community looked to him for leadership. He knew many of the leading black intellectual and political leaders in the country, and participated in several organizations with a national political or economic focus. 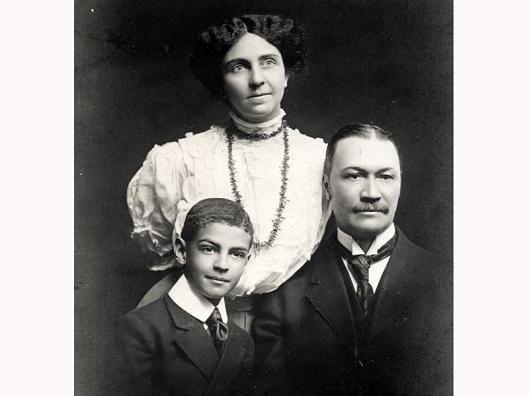 Alonzo Herndon married Adrienne Elizabeth McNeil, noted for her beauty, acting talent and intelligence. Their only son, Norris, took over his father’s business after he died in 1927. Photo source: The Herndon Home 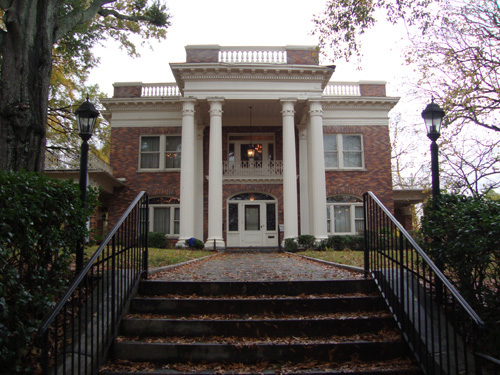 The Beaux Art-style Herndon Home, completed in 1910, still stands today and is a museum.

Herndon’s wife, Adrienne, was a drama professor at Atlanta University when they met. She was also admired for her beauty, intelligence and good taste. Along with her husband, she helped design and decorate their new Beaux Art-style residence that became the Herndon Home. Although she died shortly after the home was completed in 1910, it still stands today and is a museum. 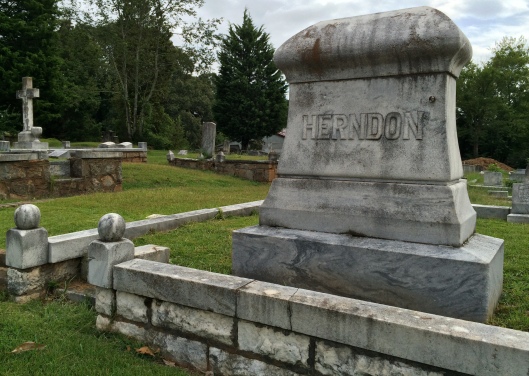 The Herndon family plot is located toward the Northeast area of the cemetery. 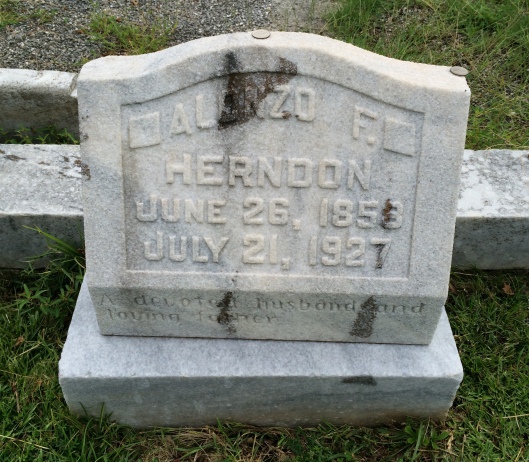 Alonzo Herndon had a public housing development (now demolished) and a stadium at Morris Brown College named after him.

Located not far from the Herndon family plot is a marker that’s quite different by contrast. George “Union” Wilder’s grave is believed to be the only existing marker for a black victim of the 1906 Atlanta Race Riot. This 2006 article by Jim Auchmutey goes into greater detail.

On Sept. 22, 1906, Atlanta newspapers were featuring extras with wildly exaggerated reports of rapes by blacks. An estimated crowd of 5,000 whites downtown started assaulting blacks at random. By the time the violence ended four days later, between 25 and 50 people were dead. One of them was 70-year-old George “Union” Wilder.

Few photos of the 1906 Atlanta Race Riot exist today. This one shows a militia guard at an intersection downtown.

When the Civil War began, Wilder was a slave working for the Wilder family in Macon. On April 8, 1865, (the day before Robert E. Lee surrendered at Appomattox), Wilder enlisted in Selma and became part of the 137th U.S. Colored Troops, a regiment of former slaves from Alabama and Georgia. Wilder was so proud of his service that he apparently adopted “Union” as a middle name.

After Wilder and his wife returned to Atlanta in the 1880s, he guarded leased convict labor at the Chattahoochee Brick Co. He applied for an invalid’s pension in 1890, complaining of rheumatism, heart disease and pain behind one eye burned by gunpowder during the war. 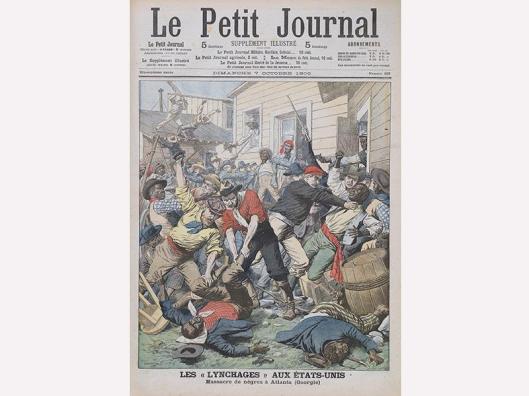 The 1906 Atlanta Race Riot made international headlines. The riot, sparked by sensationalized accounts of black violence, resulted in dozens of black deaths. This is an illustration from the October 7, 1906 issue of the French publication Le Petit Journal.

On the night her husband died, Wilder’s wife was working as a servant in a private home. But she had seen his corpse. She gave the cause of death as “cuts by knives and gun and pistol shots … in the hands of a mob.” Wilder’s death resulted in no charges. The Atlanta Constitution listed him as a riot fatality in a short brief, but none of the city’s newspapers bothered to write an obituary.

This broken grave marker is the only one known to exist for a black victim of the 1906 Atlanta Race Riot.

Seven of the riot victims lie in unmarked pauper’s graves at South-View. Only Wilder’s is marked with a broken piece of granite with an inscription that’s almost impossible to read. Below his name, age and affiliation with the Odd Fellows fraternal organization are three lines:

Our next stop was the grave of Lieutenant Walter Drake Westmoreland, member of the legendary Tuskegee Airmen. The son of a letter carrier, Westmoreland was a graduate of Class 43-G. He earned his pilot wings at Tuskegee in 1943 and flew a P-51C fighter, nicknamed “Dopey”.

Westmoreland was a member of the 332nd Fighter Group, 305th Fighter Squadron based in Italy during World WWII. To identify themselves in combat, they painted the tails of their fighters bright red, which earned them the nickname “Red Tails.” 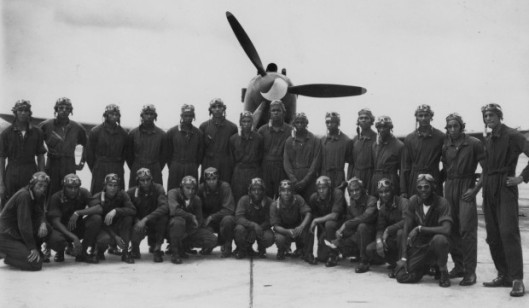 Class 43-G graduated from flight training on July 28, 1943, at Tuskegee Army Air Field in Alabama. Lt. Westmoreland is on the front row, third from the end of the left side. Photo source: U.S. Air Force Historical Research Agency

On Oct. 13, 1944, Westmoreland’s plane was shot down by enemy ground fire near Lake Balaton, Hungary, while returning from an escort mission to Blechhammer, Germany. First designated as missing in action, Westmoreland’s remains were not returned from Europe until December 1948 and he was laid to rest at South-View. 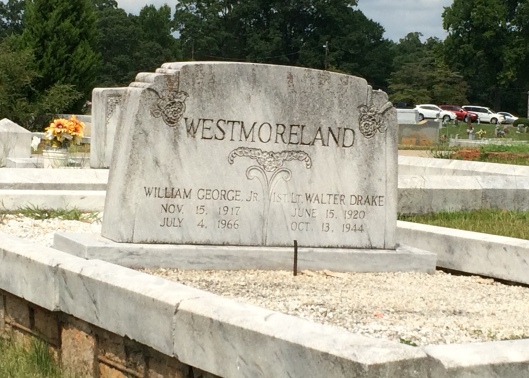 We’re not done with our tour yet so come back next week to continue the journey in Part III.