Lincoln, Nebraska began as a tiny village located on salt flats called Lancaster when it was first settled. Nebraska became a state in 1867 and Lincoln was chosen as its capital over Omaha (which had been the capital of the Nebraska Territory) with the reasoning that most of the state’s population lived south of the Platte River. The decision was a hotly contested one at the time. You can read more about it here.

Lincoln’s capitol building is the second tallest in the country (Louisiana has the tallest). Don’t miss the opportunity to tour it, the murals and art deco design are beautiful. Photo source: Frankcanfly at Panoramio.com.

I visited Lincoln some years ago with Christi but at that time, I wasn’t a hard core “hopper”. I didn’t know about Wyuka Cemetery. Located close to the University of Nebraska (and Cornhusker Stadium!), Wyuka covers 80 acres of beautifully landscaped grounds and rolling hills.

Wyuka Cemetery was established by an act of the Nebraska Legislature in 1869 to provide a ‘Lincoln State Cemetery” for the new state’s capital city. Mount Auburn Cemetery near Boston, established in 1831, was a model for Wyuka. Because the cemetery is owned by the city, it can’t be bought by a large conglomerate like Dignity. I found that comforting to know.

Wyuka got its name from the original Wyuka Cemetery in Nebraska City, established in 1855 (it’s still operating today). I found two different origins for the word Wyuka. One site said it’s from the Otoe Indian language, spelled as an English-speaker might hear the Native American phrases signifying “he lies down” or “place of reclining.” The cemetery’s web page says Wyuka is Lakota Indian for “to rest.”

We stopped at the office to purchase a copy of the invaluable guide book to Wyuka. This is no flimsy pamphlet but a comprehensive book with detailed bios about the famous (and some not so famous) people buried there.

I had the pleasure of meeting Wyuka’s president, Michael Williams. When I tell people I’m writing a blog post about their cemetery, I sometimes see raised eyebrows in response but not at Wyuka. Michael, a funeral director of 30 years, was happy to answer my questions and offer any help we needed.

Originally built in 1908-1909 and on the National Register of Historic Places along with the cemetery, Wyuka’s stables formerly housed the horses that transported caskets to the cemetery. Once automobiles took the place of the horses, the stables were used for storage.

A $1 million renovation to the stables was completed in October so they can hold events such as meetings, company retreats and wedding receptions. Since 2000, it’s also been the home of the Swan Theater and the Flatwater Shakespeare Company. When we were visiting, an open air production of Hamlet was scheduled for that evening.

The first stop on our tour was the Rudge Memorial Chapel, which was locked. Completed in 1928, the chapel is made of Indiana limestone in the Gothic Revival style. The cost of the chapel ($30,000) was donated by the family of Charles H. Rudge, who owned the Rudge & Guenzel Department Store in Lincoln before his death in 1921. Funerals and occasional weddings are held at the chapel, which seats about 75. 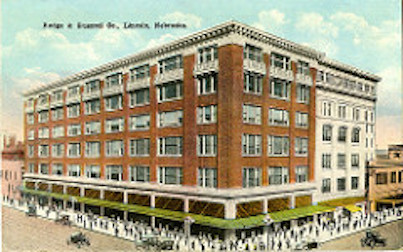 Postcard of Lincoln’s Rudge & Guenzel Department Store, which closed in 1942. Charles H. Rudge died in 1921. He injured his hand while working on one of his properties in Minnesota and it became infected.

I was happy to see that Wyuka had a handful of my favorite “white bronze” markers. These are actually made of zinc. This one, according to the guide book, was made by the Western White Bronze Company of Des Moines, Iowa.

At the time they were popular, you could select one from a catalog and have it shipped in pieces to you for easy construction. They are hollow inside, too. The Western White Bronze Company operated for 22 years, closing in 1908.

Samuel Merrill was born in England in 1805 and died in Pleasant Dale, Nebraska in 1884. Before that, the family had lived in Ohio and Canada. The three links of chain depicted on the monument symbolize the IOOF or International Order of Odd Fellows, a fraternal organization.

Not far from Merrill’s monument is a very faded stone that I would have passed without stopping if not for the guide book. The grave of Hughina Morrison is apparently the oldest in Wyuka. She died at the age of 44, buried beside her husband.

Hughina Morrison was buried in Wyuka the year it opened in 1869. A carved hand on her gravestone points skyward toward a nearly illegible inscription that originally read “Gone Home.”

One thing we noticed throughout the cemetery were the water spigots so guests could water the flowers/plants placed on graves. All of them had the ominous sign “DO NOT DRINK” hung on them. If you’ve spent enough time in historic cemeteries, this is quite normal. The water may be okay for the flowers/shrubs but you don’t want to drink it. I saw similar signs on the faucets at Chicago’s Rose Hill Cemetery.

One monument not in the guidebook is that of Cyrus Carman, a native of Ohio who moved to Nebraska to work as a shoemaker. He died at 41, leaving a wife and two children. His marker bears the Woodman of the World seal, one that you’re bound to see often in Nebraska since WOW is based in Omaha.

While it’s not in the shape of a tree (many WOW markers are), Cyrus Carman’s grave stone is quite impressive.

The Latin motto of the Woodman of the World, “Dum Tacet Clamat” translates as “Though silent, he speaks.”

Another reason Carman’s marker is different from many WOW markers is that it lists the lodge he had membership in, Lincoln Forest Camp No. 6. Most WOW markers are for people who just had WOW insurance policies but Cyrus Carman was an early member of the Modern Woodman of the World, which was similar to the Masons and Elks. They held meetings, wore woodsmen costumes and even tossed axes in unison in parades.

The gentleman on this 1910 postcard wears the insignia of the Modern Woodman of the World, which had an axe, mallet, wedge, five stars, and branches of palm. This particular member probably belonged to a MWA camp in Montana.

Th large brown granite marker for Walter Dameron is beautiful and heartbreaking at the same time. Walter, a fireman, was killed when two trains of the Burlington Railroad collided head on near Indianola, Neb. Killed in the wreck were 18 passengers and crew members, with more than 30 injured.

The logo of the Brotherhood of Locomotive Engineers is one I have seen on graves in Georgia cemeteries. Please forgive the fact you can see my reflection in the stone, I hate when I do that.

Situated among the mausoleums of some of Lincoln’s prominent residents is Wyuka’s receiving tomb. Built in the Romanesque Revival style in 1886, it is the oldest building in the cemetery. Made of limestone and built into a hillside (similar to the Horatio May Chapel in Chicago’s Rose Hill Cemetery), the receiving tomb stored caskets when the ground was frozen during the winter and was too hard to dig into for burials.

Wyuka’s receiving tomb was designed by John H.W. Hawkins, a Cornell graduate. Hawkins designed several of Lincoln’s buildings during the five years he lived there.

The last stop for this post is the grave of Gordon MacRae, the actor/singer best known for his roles in Rogers and Hammerstein’s Oklahoma! and Carousel. A New Jersey native, MacRae got his big break when he appeared on Broadway in 1946 and was offered a contract with Warner Brothers.

Besides appearing in several movies, MacRae had his own radio show until 1954. He made several albums and appeared frequently on television. He battled alcoholism in the 1960s and overcame it in the 1970s, often counseling others struggling with addiction. 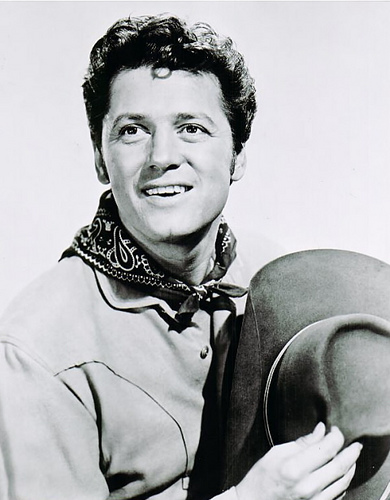 MacRae starred as Curly Maclain in both the Broadway production and movie of Rogers & Hammerstein’s musical, Oklahoma!.

MacRae’s second wife, Elizabeth, was a native of Davenport, Neb. The couple settled in Lincoln in 1980. MacRae said he felt at home in Lincoln because it reminded him of his hometown of East Orange, N.J. He died in 1986 of pneumonia as a result of complications from cancer of the mouth and jaw. 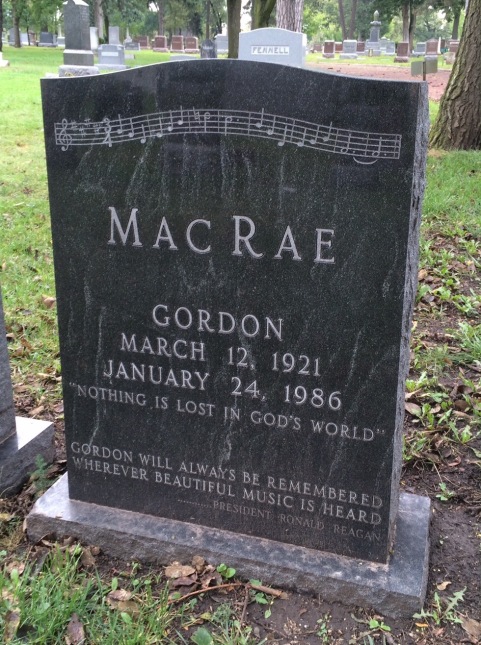 This post barely scratches the surface of my day at Wyuka. There’s so much more to see. Come back next week for Part II! 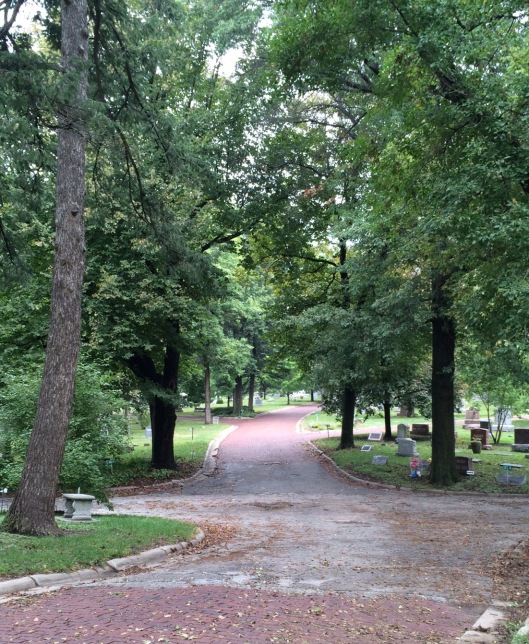