After leaving Wyuka Cemetery, we were exhausted. And hungry. I saw that a local place called the Northside Cafe was on our way out of Lincoln so off we went.

While perusing the menu, I saw that they offered Stauffer’s pies. Stauffer’s Cafe is another eatery in town that apparently produces amazing pies and when the waitress pulled a sign over detailing the many varieties we could choose from, I knew we’d picked the right place. Delicious!

If you like pie, Northside Cafe is the place for you!

I also highly recommend the quesadillas and fried portabella mushrooms, which hit the spot after wandering all over Wyuka. Cemetery hopping is not for wimps! 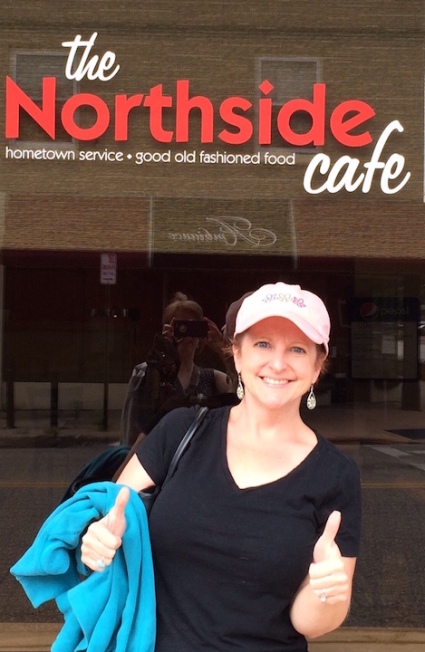 We give Lincoln’s Northside Cafe two thumbs up!

Although we were heading back to Omaha, I wanted to stop in Wahoo to visit Sunrise Cemetery. I mean, who wouldn’t want to visit a town with a name like Wahoo? 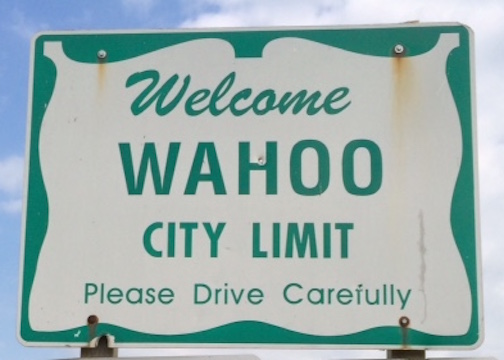 Welcome to Wahoo, which is named after an Indian word that means “burning bush.”

We stopped at the Saunders County courthouse to check out some of the cool things they were doing to commemorate the U.S.S. Wahoo (a submarine that sank 20 Japanese ships during World War II before being sunk in October 1943). I also learned that famed Hollywood producer Darryl F. Zanuck was born in Wahoo. Then we headed for Sunrise Cemetery.

Wahoo’s cemeteries are intertwined in a complex way. Small Wahoo Cemetery, also known as Greenwood, is on the north side of town (there wasn’t time to stop). On the far Southeast side of town, on one side of County Road K, is small Sunrise North (which we also didn’t visit due to lack of time).

On the other side of the County Road K is Sunrise Cemetery (also called Knights of Honor Cemetery). Inside this cemetery, on the east side, is St. Francis Catholic Cemetery. We focused on these two.

The main reason I wanted to visit Sunrise Cemetery was to visit the grave of Ludmila “Lilyan” Fencl, one of Charles Starkweather’s murder victims. She was the maid for C. Lauer Ward and his wife, Clara Ward.

Lilyan Fencl grew up in Saunders County, but spent much of her life working for the Ward family in Lincoln.

According to a 2009 article in the Journal Star, Lilyan’s father was a farmer while her mother worked in a cafe. As one of four children, Lilyan was the only one who did not marry and leave home. Instead, she went to work for the Wards in Lincoln. According to her nephew, Robert Laudenback, they became a second family to her.

Lilyan is buried with her brother, Bohmer, who died two years after she was murdered.

He remembers his step-father’s sister as a timid soul, who didn’t have much of a social life and may have not completed high school. “She was seen and not heard most of the time. ”

Lilyan, who never married, was 51 when Starweather shot and killed her. It’s hard to imagine why anyone would want to murder a gentle, hard-working woman who had lived a quiet life. But to Starkweather, she was just another person who got in the way of his twisted rampage.

Not far from Lilyan’s grave in St. Francis Cemetery was a grand monument that reminded me of many I have seen at Atlanta’s Westview Cemetery. It was made for Vincent and Marie “Mary” Simodynes.

The Simodynes monument stands out amid the other simpler graves around it.

The Simodynes were among the Saunders County founding families, having come with many other Czech immigrants starting in the late 1860s. Both Vincent and Mary were born in Nebraska to Czech parents. The Simodynes name appears often in U.S. Census records for the area and it looks like most of them were farmers.

Mary Simodynes died in 1920, at the age of 30. It’s my guess that the monument was made for her first. The Easter lily resting in the arms of the angel sometimes symbolizes youth and virtue.

Mary and Vincent had two children, Lloyd and Adeline. According to the U.S. Census, Vincent and the children were living in Los Angeles, Calif. by 1930. But by 1940, Vincent was back in Wahoo and had gotten remarried. Gennie Simodyne’s grave is nearby with other Simodynes family.

Mary’s maiden name was Koutny, so I’m sure this grave is of a child related to her. One of her uncles was named Lloyd and she named her first son Lloyd. In this case, Lloyd “Lloydie” Koutny did not live to see his second birthday. 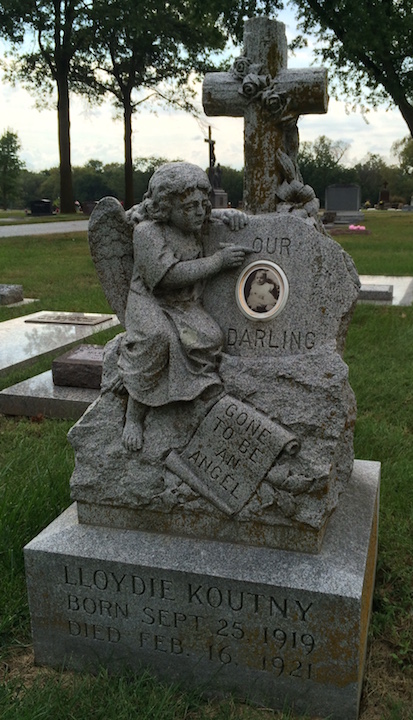 Little Lloydie was clearly much loved by his family. 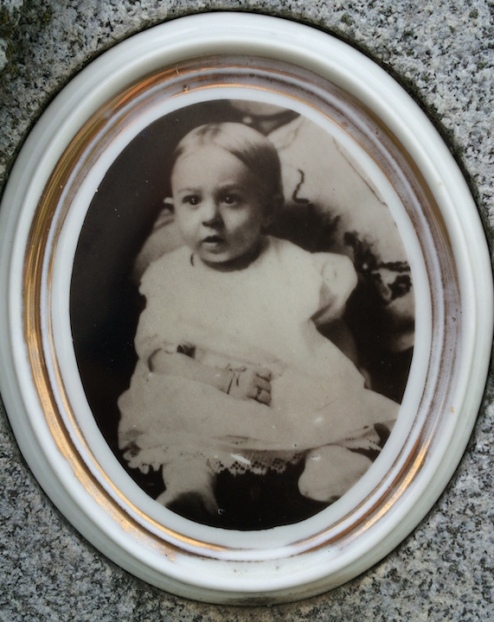 It’s hard to miss the huge monument to Antoniae Smejkal. It’s the largest one in the entirety of both Sunrise and St. Francis Cemeteries.

The scene depicted is the Crucifixion of Jesus on the cross. I am not Catholic but it’s my belief that two of the three women are Mary, the mother of Jesus, and Mary Magdalene.

Here’s a side view.

Antoniae Smejka was a Czech immigrant. Except for 1930 (the year she died), every time I found her in the U.S. Census records, she was listed as single or widowed.

Father Bor pastored a number of Catholic churches in Saunders County over the years. 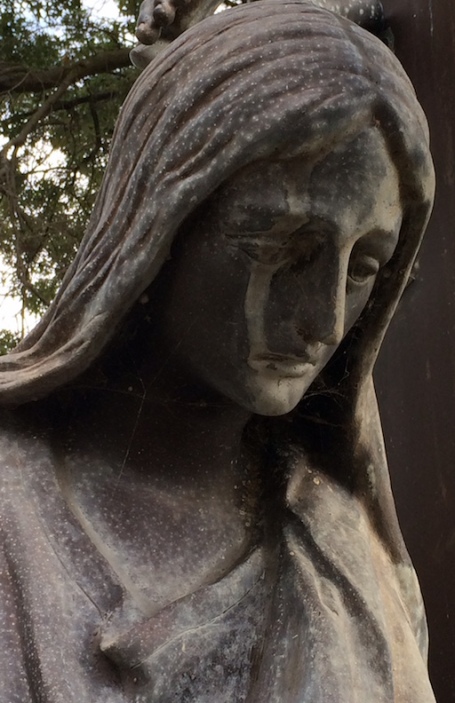 I can only guess that Antoniae’s many years of devotion to Father Bor was honored by parishioners with this grand monument. Like many monuments I find so amazing, I took many pictures from several angles.

Looking up into the face of Jesus on the cross.

The only mausoleum in the entire place belongs to the Kirchman family, headed by successful banker Wencl C. (W.C) Kirchman.

The Kirchman mausoleum is the only one in St. Francis or Sunrise Cemeteries. W.C. Kirchman’s wife, Johanna, was the first to be interred in it after she died in 1909.

A Czech immigrant who was first a grocer in Pittsburgh, Pa., W.C. came out to Saunders County, Neb. in the 1870s and became co-owner of a general store in Prague. Considered one of the county’s pioneers, he eventually established several banks in the county. He was also postmaster in the 1890s and very active in local government.

The door of the Kirchman family mausoleum.

W.C.’s younger brother, Frank (who was much younger than him), and their parents, arrived in Pittsburgh in 1868. In 1881, Frank joined W.C. in Nebraska and helped him manage his several banks, taking over for his brother after his death in 1924.

I was doing research on Frank’s lovely Queen Anne-style home that he had built in 1903 when I found a jolting bit of information about him. While he is not buried at Sunrise/St. Francis, his story is worth telling.

Nobody could have predicted how Frank Kirchman went from a wealthy banker to a penitentiary inmate.

According to the application made to put the Kirchman home on the National Register of Historic Places, Frank Kirchman and his banks prospered until 1930 when the Depression hit the Midwest. Townspeople rushed the banks to collect their savings and soon discovered $26,400 missing.

In May 1930, Frank was found responsible for the missing money and arrested at his home. He was sentenced to a 60-year penitentiary term and fined $11,000. Soon after, he sold his beautiful home before beginning his term. Two of his nephews, sons of his brother W.C., worked for Frank in his banks and were convicted for lesser offenses. 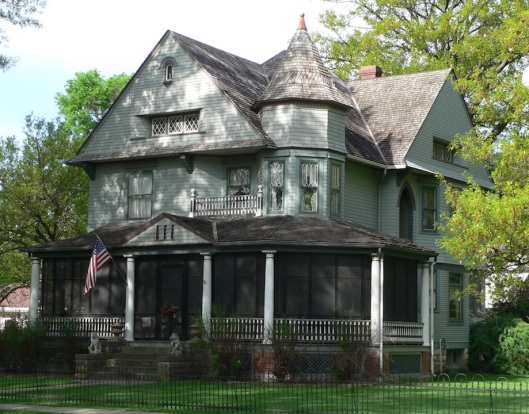 The Frank Kirchman Home has been beautifully restored. As a fine example of Queen Anne-style architecture, it is on the National Register of Historic Places.

Like a number of bankers who faced a similar fate, Frank appealed to the courts to have his sentence shortened. In 1936, his sentence was commuted and he was released from the penitentiary. His two nephews’ sentences were also commuted soon after.

Despite his frail appearance, Frank lived another 17 years before dying in 1953. He is buried in Calvary Cemetery in Alliance, Neb., almost 500 miles away from Wahoo.

It was time to get back on the road to head home to Omaha. There was one more Nebraska cemetery I wanted to see before I returned to Atlanta: Forest Lawn Memorial Park.

On the lawn of the Saunders County courthouse is a replica of a Mark 14 torpedo that memorializes the 65 crew members who perished when the submarine U.S.S. Wahoo was sunk during enemy action in the Sea of Japan during World War II.

4 thoughts on “Back on the Road: Stopping at Wahoo’s Sunrise/St. Francis Cemeteries”