Heading into Part II of my series on Forest Lawn Memorial Park, the first grave I want to talk about is one that may be the most talked about monument. You wouldn’t expect to see this type of bronze figure in a cemetery. 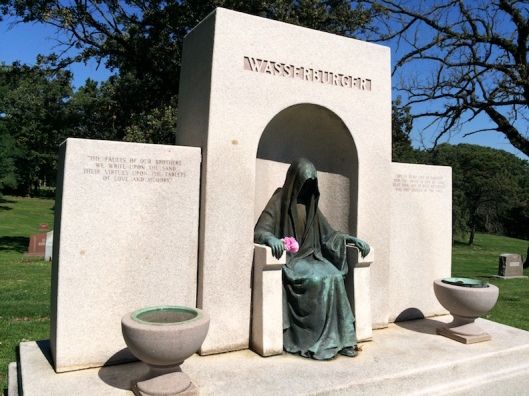 A lone shrouded figure awaits visitors at the Wasserburger gravesite.

The monument was built for Joseph Josiah Wasserburger and his wife, Alma. Josiah was a manager for Household Finance (formerly Omaha Finance) and became quite wealthy from real estate investments. He and Alma had no children but lavished their love on their dogs. This well-written article can tell you more about them. Marta Dawes’ comprehensive Omaha cemetery web site provided me with much of the information you’ll read in this post.

The sun was quite bright on the day we visited so the face isn’t easy to see. People frequently leave a flower in the statue’s hand.

Made by J. F. Bloom & Co. of Omaha, the monument is fashioned from Balfour pink granite (which you can also see at Wyuka). The company has been in business since 1879 and still operates today.

Josiah Wasserburger purchased the monument for $3,500 in 1938, 18 years before he and Alma died. This amount of money, in 2015 dollars, would be approximately $70,000. It’s certainly curious that they planned their memorial almost 20 years before their deaths.

Getting a decent closeup of the figure’s face wasn’t easy in the bright sunlight.

The figure instantly reminded me of Lorado Taft’s ominous “Eternal Silence”, the sculpture at the grave of Dexter Graves in Chicago’s Graceland Cemetery, which was made 30 years before the Wasserburger one. The Marian “Clover” Adams memorial sculpture by Augustus Saint-Gaudens in Washington D.C. is also similar.

After Josiah retired in 1935, the couple did a lot of traveling. When they died, they left an estate valued at $100,000 in cash, and $25,000 in real estate. They donated the cash to Childrens’ Hospital, the Omaha Home for Boys, the Immanuel Deaconess Institute, and their church. The real estate estate proceeds went to family members. Josiah died in 1956 at the age of 84 and Alma died only five days later. She was 81. 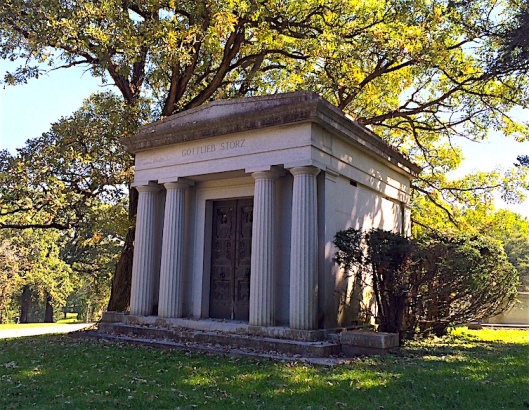 This is the first Storz mausoleum. I tried to photograph the stained glass through the doors but failed miserably.

A German immigrant, Gottlieb Storz came to Omaha in 1876 and worked as a foreman for a local brewery. With skills learned in his native country, Storz’ reputation as a master brewer grew. Eventually, he opened his own facility in 1891 and over the years, Storz’ beers won prizes in international competitions.

In 1891, Gottlieb Storz founded the Omaha Brewing Association, with himself as president. Photo source: Wikimedia Commons.

While there was a dog’s face on the Jacobs mausoleum, this one has stunning twin angels and lions on them.

I’ve seen a variety of things on mausoleum doors but these two angels rank among the most lovely I’ve seen.

Like the Wasserburgers, Gottlieb Storz made his final wishes known long before he died at age 87. He wanted to have a funeral service at his home with his body lying in state.  He also wanted his fellow Elk lodge brothers to sing at the service. All of his wishes were granted before he was interred in this mausoleum. His wife, Minnie, is buried with him. 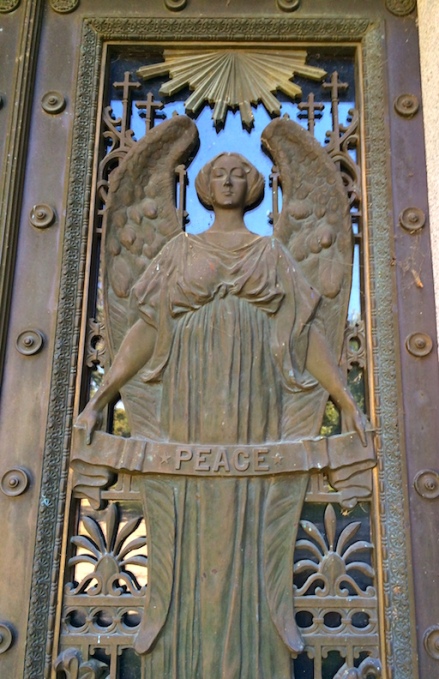 An angel of peace watches over the Storz family.

The Storz mansion, a beautiful Victorian home, was built in 1905. Built in the Jacobethan Revival style with beige brick and limestone trim, the mansion features a red tile roof, steep gables, rectangular windows, transoms and a symmetrical facade. Architects George Fisher and Harry Lawrie designed it.

The Storz Mansion is on the National Register of Historic Places and was the site for many parties for Omaha’s elite over the years.

The home is no longer owned by the Storz family, but was donated to Creighton University in 2002. The school sold it to a private family in 2007 who had plans to restore it.

Gottlieb’s younger son, Robert Herman Storz, has his own mausoleum not far away. He’s buried there with his wife, Mildred, and son, Robert Todd Storz. 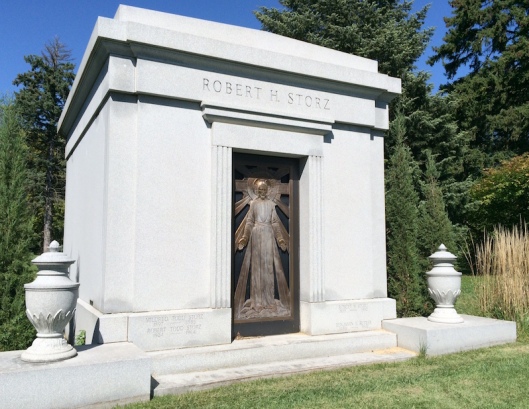 The second Storz mausoleum is more modern in style but the effort to make the door look unique is shared with the first one.

But it’s Robert Howard Storz’ son Robert Todd Storz (who went by his middle name, Todd) who is probably better known. In 1949, he and his father purchased Omaha radio station KOWH, which anchored Storz Broadcasting Co., a chain of radio stations. Todd was the station’s general manager.

Todd Storz, who helped pioneer the Top 40 radio format, died at the young age of 39.

Todd noticed the enthusiastic response certain songs received from the record-buying public and compared it to the way certain selections on jukeboxes were played over and over. Out of that observation came the origins of the Top 40 format that we know today. Many stations went on to copy it, making it a great success.

The Robert Howard Storz mausoleum is located among a row of more modern ones. Instead of twin angels, Jesus stands at the door.

Sadly, at the height of his career, Storz died of a stroke in 1964. He was only 39. But his legacy has lived long after him at radio stations across the country.

The last mausoleum I’m going to talk about is notable for its Egyptian Revival-style motifs. The Bostwick mausoleum is where Henry “Harry” C. Bostwick, a wealthy banker, is interred.

The Bostwick mausoleum features Egyptian motifs such as the winged disc and cobras.

I did a little research on the winged disc/cobras motif because I’ve seen this before on other mausoleums. It suggests that someone interred within was a Freemason. I’m guessing it was probably Harry since prominent residents of cities like Omaha were often involved in Masonic groups.

In Ancient Egypt, the winged disk was a combined emblem of the sun, a double-headed cobra and eagle or vulture wings. The cobra and the vulture represented Upper and Lower Egypt, in the geographical sense and in the sense of a Celestial Egypt and a Terrestrial Egypt. Such symbols are also associated with the Zodiac. Somehow, it all ties in with Freemasonry but it’s a lot more detailed than I can share here.

The symbols of the winged disc, cobra and wings are connected to Freemasonry. I was able to get a nice closeup of it.

Born in New Jersey, Harry Bostwick moved out to Montrose, Colo. sometime in the 1870s. He helped develop a large fertile piece of land for growing potatoes. The area still bears a trace of his name, Bostwick Park Road.

After experiencing irrigation woes in Colorado, Harry headed for Omaha where he decided to enter the banking business. He found success, becoming president of the Stockyards Bank. Having never married, Harry died in 1920 and his estate passed to his niece and her daughter.

Next week, we’ll visit some more notable monuments and mausoleums. There’s much more to see at Forest Lawn next week in Part III.