Since I started writing this blog, I’ve had several people ask me about “green” cemeteries. These are cemeteries that are more environmentally friendly than traditional ones. I didn’t know much about them so I had a lot of questions.

Georgia currently has two green cemeteries, Honey Creek Woodlands (a natural burial ground) outside of Conyers and Milton Fields in Milton, a suburb of North Atlanta. My friend and fellow “Church Chick” Sarah told me she had been to the Monastery of the Holy Spirit while on a ride with her cycling group. The Monastery (officially called Our Lady of the Holy Spirit Monastery) owns and operates Honey Creek Woodlands, which is right across the road.

A few months ago, Sarah and I invited another Church Chick, Megan, to join us on a sunny January afternoon to visit the Monastery, then explore Honey Creek Woodlands and find out more about “green” burial. 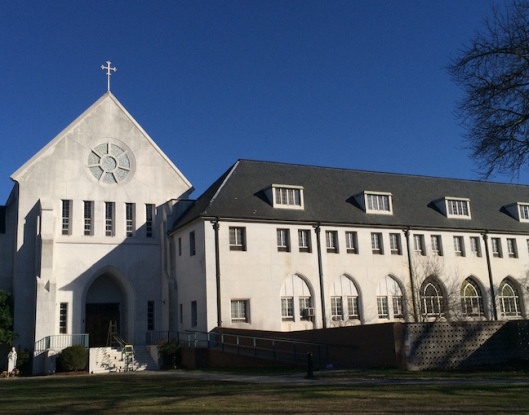 The Monastery of the Holy Spirit is located outside Conyers, Ga., about 25 miles southeast of Atlanta. On the far left is the Abbey Chapel.

Because Honey Creek Woodlands is owned by the Monastery, you can’t tell the story of one without the other. In 1944, 21 Trappist monks left Gethsemani Abbey in Kentucky to found a monastery in rural Conyers, Ga. At the time, the diocese was centered in Savannah and only one Catholic family lived in Rockdale County where Conyers is located.

The monks lived in a barn while building the concrete Abbey Church, which took 15 years to complete. A museum that shares the history of the Monastery is inside that original barn today, which we walked through during our visit. 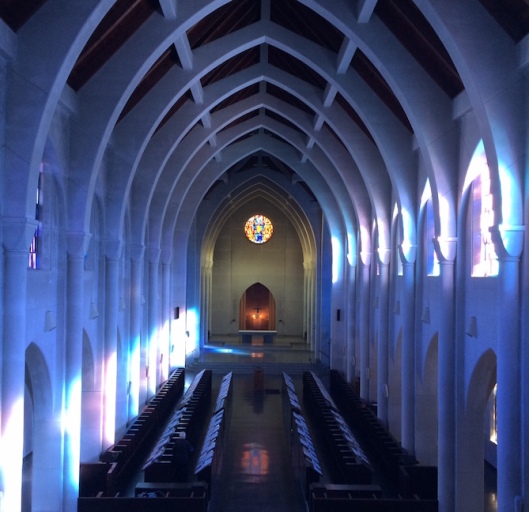 The Abbey Church is open to visitors who are encouraged to witness the monks during mass, mid-day prayer or vespers.

In addition to a visitors’ center that opened in 2011, the Monastery has the largest Christian bookstore in the state on the grounds. The monks grow and sell Bonsai trees in their garden center, in addition to baking delicious breads that they sell. Stained glass made on site is sold. They also host onsite retreats on topics from prayer to photography.

Over the years, the monks tried their hand at growing hay and farming various crops but were unable to find a reliable source of income in addition to their other efforts. Starting around 2006, the monks began looking into other options to raise funds while being good ecological stewards of the 2,200 acres they own.

Amid that land, almost 1,000 of those acres are under permanent protection as part of the Mount Arabia Heritage Corridor. Within these protected acres are the green burial grounds of Honey Creek Woodlands, which was once part of an old terraced farm area that probably grew cotton and other bare-earth crops. The first burial took place in 2008. 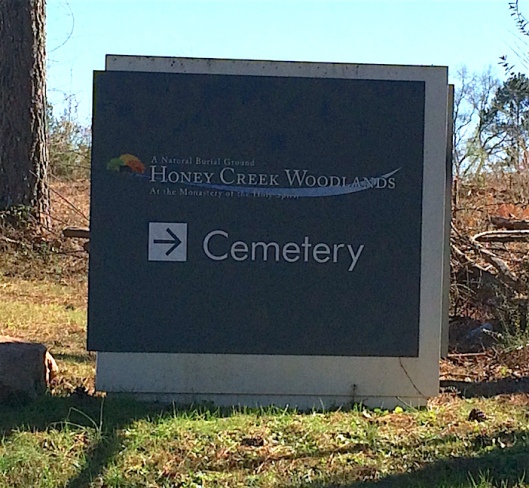 The Rockdale River Trail, used by many cyclists, winds past the Monastery and Honey Creek Woodlands.

Sarah had already made an appointment for us to meet with Joe Whittaker, who has a lot of experience with green cemeteries. He previously worked at Ramsey Creek in Westminster, S.C., the first conservation burial ground in the U.S. The original 33-acre site opened in 1998. While Joe is not a monk, he enjoys working with them and helping people explore their green burial options. 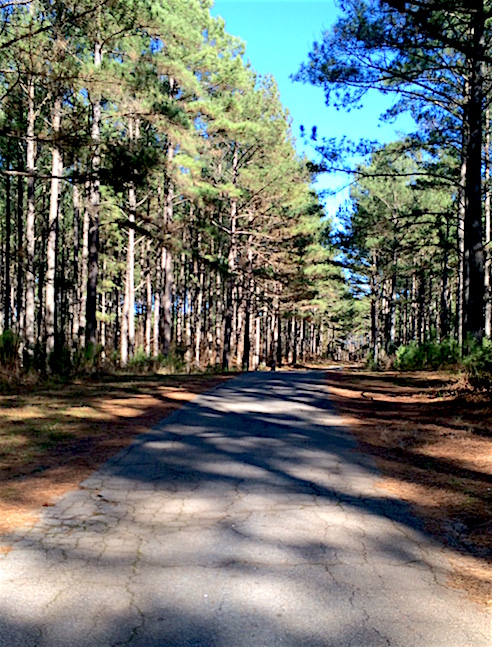 The road into Honey Creek doesn’t look like what you see at a traditional cemetery.

Honey Creek does not have a chapel yet to hold funeral services in, but that’s coming soon. They do have an area in their main building (where the office is located) where you can host small receptions afterward. The monks do not take part in any of this but they do offer up prayers for everyone buried at Honey Creek.

Meeting with Joe (the only full-time employee) reminded me of how different green cemeteries are. At a traditional cemetery or funeral home office, the environment can seem stiff and formal. At Honey Creek, Joe was wearing jeans and a ball cap and we were dressed casually as well. He spoke respectfully but frankly with us. I’ve also never been to a cemetery office that had it’s own cat. 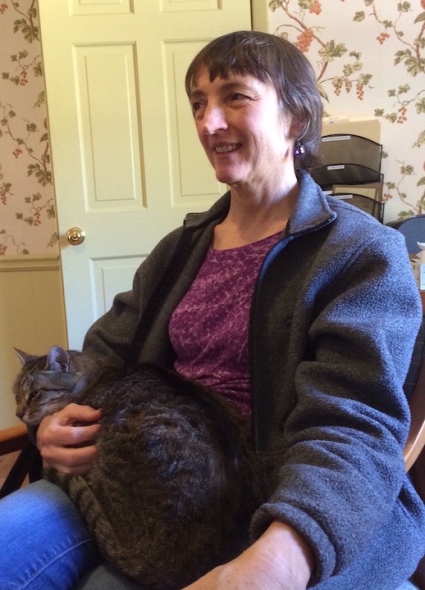 Sarah, who was the one seriously looking into green burial, enjoyed having the office cat jump into her lap.

Honey Creek does not allow embalming. That surprises most people, who are used to traditional cemeteries that tell them it’s required by state law (it is not). So what if you can’t have the burial within 24 to 48 hours? No problem. Dry ice or refrigeration at a local funeral home can extend that time to three or four days.

The body is wrapped in a shroud or placed in a biodegradable container, such as a wicker or simple wooden casket. It’s then buried in a shallow grave, about three and a half feet deep, where microbe-rich soils break down the body naturally. The distance between graves is at least four feet. A concrete vault is not required. 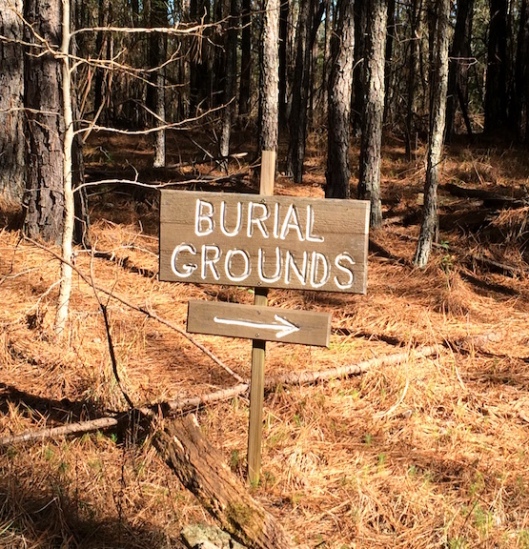 The monks at the Monastery do not make caskets but the Trappist monks of New Melleray Abbey in Iowa do. They make them by hand, from the simplest pine to more grander styles. You can order one and have it shipped to you.

Above ground, two to three feet of topsoil is mounded on top, and the grave is marked with something like a tree, wildflowers or some type of inconspicuous ecologically functional marker. The small flat stone markers that Honey Creek sells range from $200 to $400, and you can inscribe as much or as little as you like. Any marker brought in from the outside has to be pre-approved. No obelisks or towering bronzes.

One question I had was if you have to be Catholic to be buried at Honey Creek and the answer is no. All religions (or none at all) are welcome.

So how much does this cost? Joe explained that one key factor can determine that: body burial or cremated remains (cremains) burial. Body burial is more expensive due to the cost of the container and labor involved in digging the hole (which is done by hand, not with a backhoe). Unlike most traditional cemeteries and funeral homes, Honey Creek posts their prices on their website. 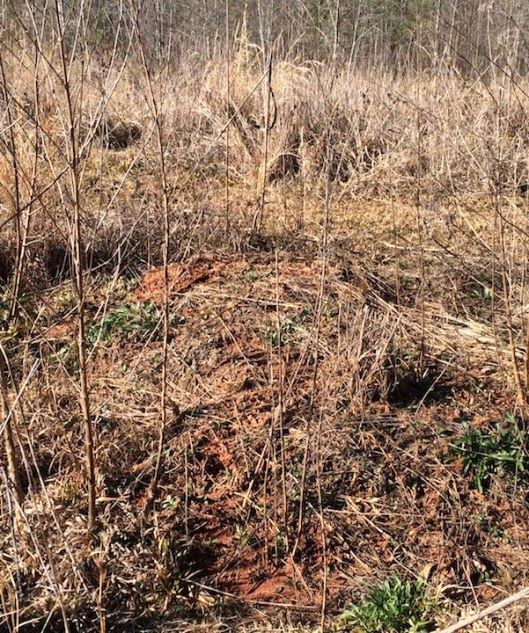 An unmarked grave in the Meadow area.

One of the most appealing aspects of green burial (aside from the environmental benefits) is that families and friends are encouraged to take part in any burial ceremony or funeral service at the graveside. That can range from signing one’s name on a wooden casket, singing songs or laying flowers/mementos at the grave. 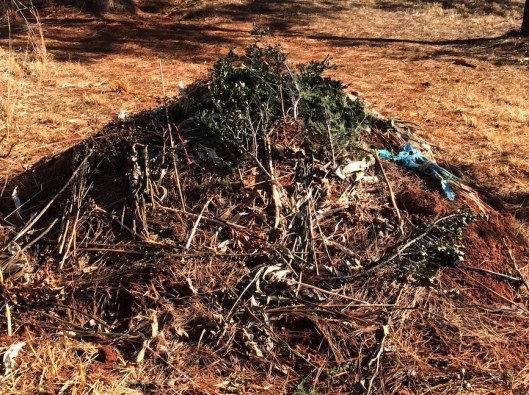 A recent burial at Honey Creek Woodlands. I think we were in the Meadow area.

Joe said that on occasion, clients have asked if they could dig the grave themselves in homage to their loved one. But it’s such a labor intensive job, few are able to complete it. One exception was a case in which a young college student was killed in a car accident. His friends took turns one at a time digging his grave to honor his memory. 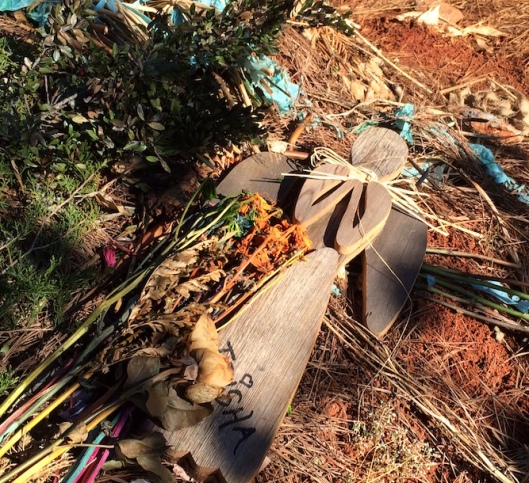 An angel, signed by a friend or family member, is left at the grave.

Two options not usually available at traditional cemeteries is having a dove or butterfly release at the burial ceremony/funeral. In case you were wondering, the doves are locally owned and are trained to fly back to their owner’s home (wow!). Butterfly releases are a bit cheaper (and once released, they’re gone). 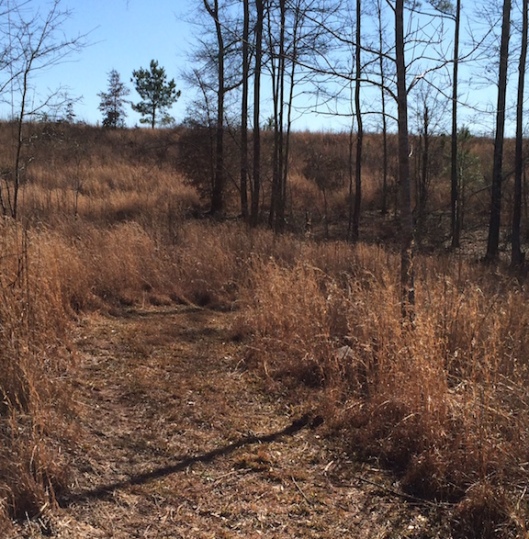 The path through the Meadow area.

To get to the burial sites, we went on foot down the gravel road. If you aren’t physically able, golf carts are available for that purpose. Walking is the best way to get a feel for the place. As we trekked through the Meadow area, I noticed how incredibly quiet it was. You could hear the birds and the breezes but little else. It’s just you and nature. 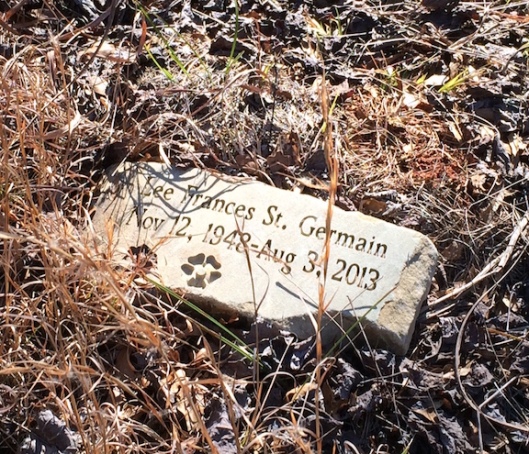 An example of a grave stone at Honey Creek. They all lie flat, not upright as in traditional cemeteries. 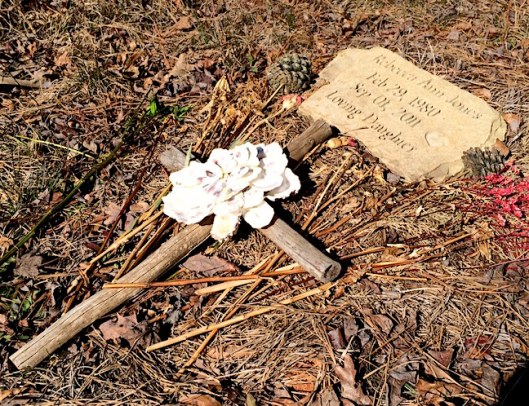 If you look closely, you can see that the “petals” of the flower are actually oyster shells.

One question I had for Joe was if someone doesn’t have a stone marker placed at their grave, how do they keep track of who is buried where? What happens when a visitor wants to pay their respects? The answer is that they enter data into a GIS (Geographical Information System) database for individual burials, based on reference markers along the trails, which are archived electronically and on paper. So they know where everybody is at all times and where not to dig. 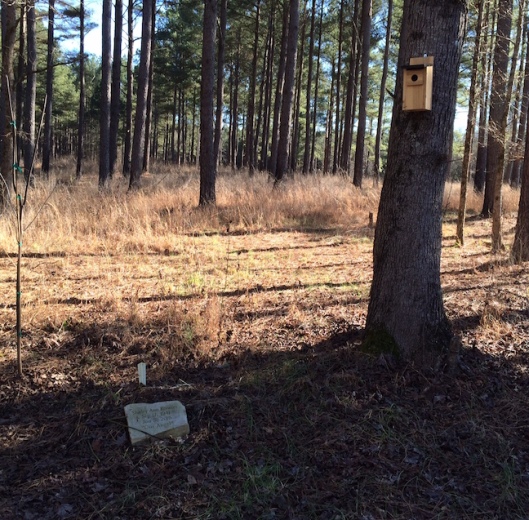 This is a Forrest area of Honey Creek.

According to Joe, the first year Honey Creek Woodlands was in operation, they had 12 burials. In 2015, there were 140. They’ve been averaging about five burials per week. With enough room for 16,000 burials, Honey Creek has plenty of room for many more.

I’m not sure if I would ever choose to buried at a green cemetery. But after visiting Honey Creek, I’m certainly impressed by how it’s operated and the less expensive options available. It’s definitely food for thought. This kind of burial truly allows one to return to the soil without the use of toxic chemicals in a peaceful, natural setting. 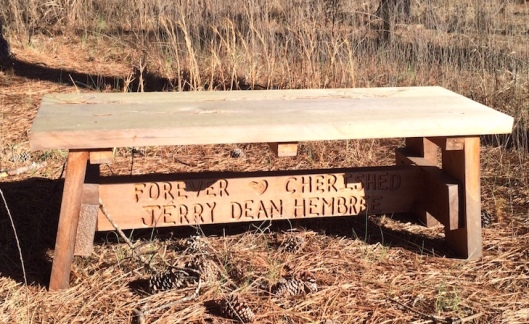