Last year, when we were looking to move to another part of Atlanta, we connected with Harry Norman Realtors agent extraordinaire Bob Freeman. He was invaluable in helping us find the right home. Add to that the fact he didn’t think I was a total freak when I mentioned my fascination with cemeteries. He suggested I visit Oak Hill Cemetery in Newnan, where many of his own ancestors are buried.

Newnan, Ga. is located in Coweta County, not far from my adopted hometown of Fayetteville. My most vivid memory of Newnan was that in my teens, I took my driver’s test there. Rumor had it they were not as busy as the Fayetteville DMV. I must confess, I flunked parallel parking! Thankfully, the elderly gentleman who was monitoring my progress took pity on me and said, “Ah, nobody really has to do it that much anyway. You passed!” 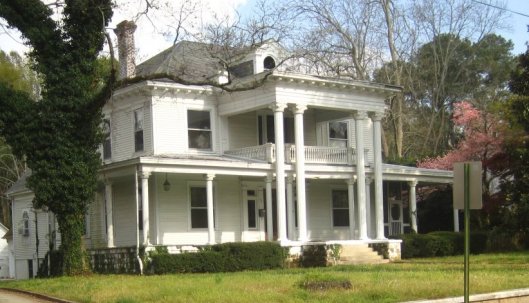 Established in 1828, Newnan is known as the “City of Homes” for good reason. Photo source: Bike Across America.

On a beautiful day in late March, I drove down to Oak Hill Cemetery to check it out. It’s still an active cemetery and you can see it’s taken care of very nicely. Established in 1833, Oak Hill has over 12,000 graves and sits on 60 acres. It is the final resting place for two Georgia governors and eight Congressman.

It also has the distinction of being one of the few cemeteries in the world with a grave marker for a single body part. But I’ll get to that later.

One of the reasons I like Oak Hill is the wide variety of monument styles. Nothing boring about itl. I was intrigued by Dr. Daniel Haney’s grave because of the intricate carving on the sides, and the moss growing into it.

Daniel Haney’s grave is engraved on the sides, more ornate than most tablet markers I see.

Because Dr. Haney died at 41, my curiosity sent me into research mode. I discovered that Dr. Haney had gotten his medical degree from Atlanta Medical College (which became Emory University). In 1914, he married Mayme Everett, who was most likely a widow. They never had children. He practiced medicine in Newnan and Atlanta. He died in 1922 in Franklin, N.C. of chronic nephritis (kidney disease).

One thing that caught my eye was a listing for Dr. Haney in an Atlanta business directory from 1911. He’s listed as a physician working at the Pine Ridge Sanitarium. Such places were very common at this time time before tuberculosis was successfully treated with drugs. Some of these facilities were more like fine resorts than hospitals. I found an ad for Pine Ridge in a travel magazine from 1909 that extols its virtues.

Pine Ridge was one of many sanitariums in operation during the turn of the century for the treatment of tuberculosis patients.

Established by Dr. George Brown, Pine Ridge boasted a 50-bed facility nestled in a peaceful, rustic setting with fresh air and food. The ad boasts that between July 1908 and August 1909, Pine Ridge had a cure rate of 82.6-7 percent (that’s really precise!).

Despite the ad’s statement that the sanitarium was located in the “famous Pine Ridge section of Georgia”, I wasn’t able to pinpoint exactly where it had been located. My best guess was that it was situated in what is now the upscale Morningside neighborhood, known for its leafy streets and wooded areas. Pine Ridge has long since vanished with no record of its closing.

I know even less about William E. Turner, whose marker features a beautiful dove with an olive branch in its beak. I’ve seen this motif before but I’m always struck by it. It’s most often a symbol of peace.

The inscription is: “Of our whole world of love and song, Thou wast the only light.”

William was only 30 when he died. Census records indicate his parents died when he was in his teens and he lived with a sister in Alabama for a time. At the time of his death, he was single and working as a barber in Newnan. 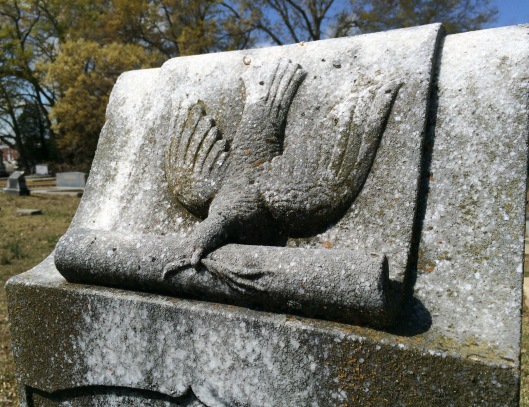 A dove carrying an olive branch is also mentioned in the story of Noah’s ark as a sign that the flood waters were receding.

Near William’s grave, I noticed the markers for two little girls. One had died at age four and the other at age two. They were the daughters of Congressman William C. Wright and his first wife, Pauline Wright. Their three other children (Evelyn, Arnold and William Jr.) all lived to adulthood. William Jr. is buried at Oak Hill as well.

In a biography about her father, Pauline Wright’s (R) death at age two was described as being called by “the reaper of the flowers.”

A successful lawyer, Wright served as Newnan’s city attorney and solicitor. He was elected as a Democrat to the Congress to fill the vacancy caused by the resignation of William C. Adamson. He was re-elected to the 66th United States Congress and to the six succeeding Congresses (January 16, 1918 – March 3, 1933).

Before William C. Wright became a Congressman, he was well-known in Newnan as an attorney.

Sadly, Pauline died in Washington, D.C. only a few months after her husband began the 67th Congress. He later married Rosa Bunn and died in 1933, only three months after his last term ended. 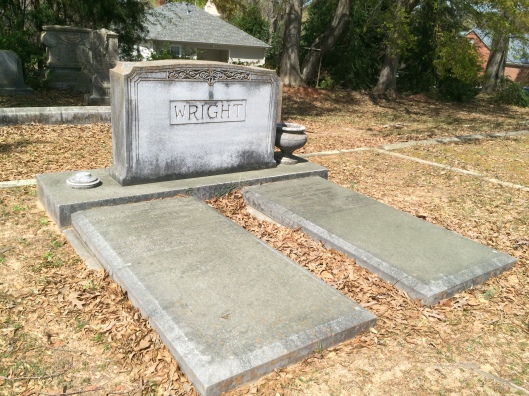 Congressman Wright and his first wife, Pauline, are buried near their daughters who died as children.

Now about that body part I mentioned earlier. In my wanderings around Oak Hill, I came up on a marker that made me stop in my tracks. I think you would, too, if you saw it.

I can honestly say I’ve never seen a grave marker for a body part before.

At first, I thought maybe it was some bizarre symbol for an obscure fraternal group like the Odd Fellows (which has the floating eyeball). But after I checked the brochure for Oak Hill, the story behind it unfolded.

Newnan farmer John H. Keith (the owner of the arm) once worked in a local sawmill. I don’t know when it happened but he had an accident that resulted in the loss of his arm. I also don’t know if it was his idea to create a marker and bury his arm. I did learn that John Keith married Sarah Coggin and together they had six children. So despite the loss of limb, he led what appears to be a full and happy life. 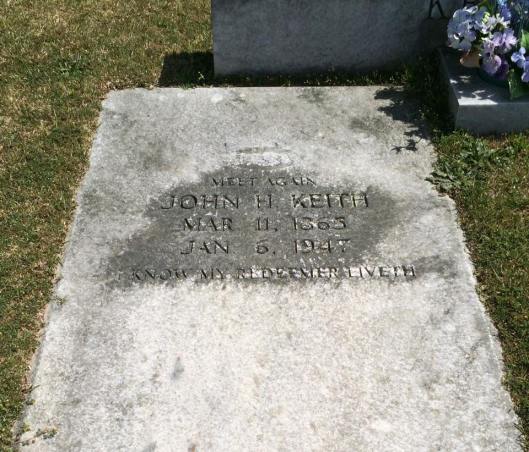 John Keith, buried beside his wife Sarah, died some years after he lost his arm.

I know of only one other marker for a lost arm and that was for Confederate General Stonewall Jackson. How he lost his arm is an interesting story by itself.

On May 2, 1863 at the Battle of Chancellorsville, Jackson was mistaken for an enemy officer by his own men and they shot him. They fired a volley, lodging a bullet in his right hand and shattering his left arm.

Despite cannon fire on both sides, stretcher bearers removed him and placed him in a horse-drawn ambulance wagon which traveled for four miles over rutted roads to the field hospital at the Old Tavern in the Wilderness.  Dr. Hunter H. McGuirey removed the ball from his right hand and amputated Jackson’s left arm about two inches below the shoulder. 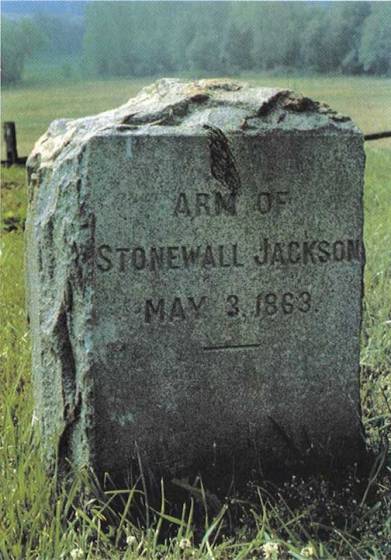 Upon learning of Jackson’s fate the next morning, General Robert E. Lee said, “He has lost his left arm, but I have lost my right.” Jackson’s arm was buried about half a mile from the field hospital in the burial plot of the Lacy family at Ellwood. It wasn’t until 1903 that some of Jackson’s friends placed a stone on the spot where it was buried.

When Jackson died a week later, he was buried 100 miles away in Lexington, Va., where he had taught before the war at the Virginia Military Institute.

Was John Keith trying to copy Stonewall Jackson? I don’t know but it’s an intriguing thought. 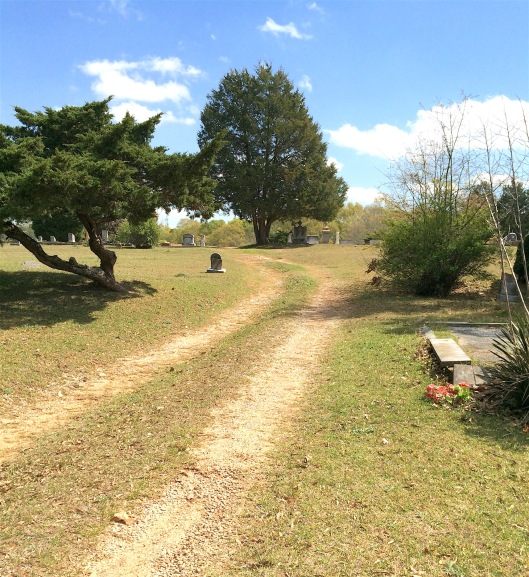 2 thoughts on “Newnan’s Oak Hill Cemetery: The Long Arm of the Past, Part I”