Last week, I shared more of the history of the 23 cemeteries that make up the Magnolia Umbra Cemetery District (MUCD) in North Charleston. It feels like the more I look into this place, the more that surfaces.

One of the cemeteries in the MUCD is Lewis Christian Union Cemetery. I found an informative article about this cemetery, thanks to the Preservation Society of Charleston (PSC). They are taking great pains to keep this small cemetery from falling into ruin. You can read more about their efforts here. 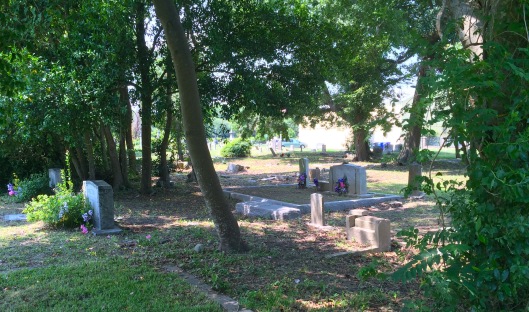 The Lewis Christian Union was chartered in 1879 by the South Carolina Legislature “to promote the spiritual benefit of its members, the care of its members when in sickness and distress in life and their burial at death.” Two months later, this African-American group purchased two lots at the corner of Skurvin and Pershing streets to be used as a cemetery.

Beyond that, I couldn’t find out much about it so I don’t know what benefits they offered their members.

Lewis Christian is wedged beside Friendly Union Society Cemetery and Bethel UMC Cemetery. It’s hard to tell where one ends and another begin. One of the pictures I took (didn’t know I was in Lewis Christian Union Cemetery at the time) was the grave of Lydia Bonneau, largely because it’s almost been swallowed up by the ground. I had no idea what her story was until I read the article by the PSC. 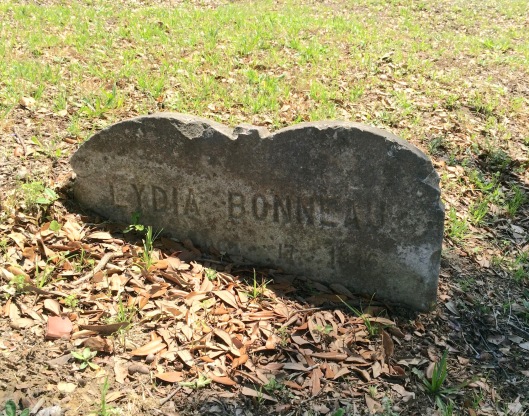 Lydia Bonneau’s simple marker gives no hint of the horrible way she died.

Lydia Bonneau was reportedly born in Georgia on Oct. 17, 1876. Newspaper accounts indicate she was living with a husband, Cyrus Bonneau, at the time of her death on June 7, 1901. Their residence, 24 Poinsett St., was about 350 feet from the Charleston Consolidated Railway Gas and Electric Light Company.

Around midnight, the 18-ton flywheel in the powerhouse, rotating at about 150 revolutions per minute, exploded through the walls and roof. One piece, estimated to be five feet long and weighing one ton, came through the roof of the Bonneau home on Poinsett Street. Lydia and her husband were thrown from their house by the momentum, and she died instantly. 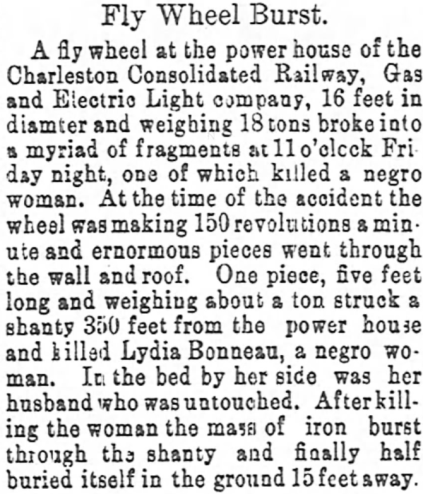 This article from the June 12 edition of the Manning (S.C.) Times explains the details of Lydia Bonneau’s tragic death.

Records indicate that the power company settled her husband’s claim for compensation for $515. Shortly after she died, her infant daughter died from an illness and was buried beside her. There are about a dozen Bonneaus recorded as being buried at Lewis Christian, but Lydia has the only marker.

Not far from Lydia’s grave is that of Jack Jones. His is actually the first African-American Civil War veteran grave I’ve ever seen up close. The ones I saw at Morris Brown AME Cemetery (mentioned in Part I) came later in the day. His was also the most legible one I saw that day, perhaps because it’s shaded by trees.

The grave marker of Jack Jones is the first I’ve ever seen for an African-American Civil War veteran. It’s in excellent condition compared to others I saw.

Jones was born in Hilton Head, S.C., enlisted in the 34th U.S. Colored Infantry, Company C in March 1865 as the war was winding down. Like many other African-American men who enlisted at this time, it’s unlikely he ever saw combat during his brief duty. He returned to Charleston, married and had a family. He died around 1912, his wife continuing to receive his pension.

Across the street from Lewis Christian Union Cemetery is Brotherly Association Cemetery. The history of its formation is tied closely to Brown Fellowship Society, a group I talked about last week.

Brotherly Association Cemetery is one of the 23 cemeteries in the Magnolia Umbra Cemetery District.

In 1843, Thomas Smalls, a Free Person of Color (FPC) applied for membership in the Brown Fellowship Society. But he was denied membership because of the darkness of his skin and possibly because his hair was not straight enough. In response, Smalls (a member of the Circular Congregational Church), organized his own society and called it The Society for Free Blacks of Dark Complexion. It was later renamed the Brotherly Association Society.

I photographed one of the grander plots I saw, planning on finding out who it was later. Thomas Ezekiel Miller was indeed a trailblazer and remarkable man. He was one of only five African-Americans elected to Congress from the South during post-Reconstruction and the Jim Crow era. After that, no African-Americans were elected from the South until 1972.

Thomas E. Miller had a long resume, serving in many positions in his life. He was a school commissioner, state legislator, U.S. Representative, and first president of South Carolina State University, a historically black college established as a land grant school.

Born in Ferrebeeville, S.C. in 1847, Miller was the son of a wealthy white man and the fair-skinned mulatto daughter of Judge Thomas Heyward, Jr. (who signed the Declaration of Independence). Miller’s paternal grandparents urged his father to put the child up for adoption. Miller was adopted by former slaves that were now FPC.

In 1851, his family moved to Charleston, where Miller attended a school for FPC children. When the Civil War was over, Miller moved to New York. Because of his appearance and European ancestry, Miller could have “passed” as a white man in the North, but chose to identify himself as black.

The son of a mulatto mother and a white father, Thomas Ezekiel Miller identified himself as African-American. Photo source: The South Carolina State Historical Collection & Archives.

In 1896, Miller became the first president of the Colored Normal, Industrial, Agricultural, and Mechanical College of South Carolina, located in Orangeburg, S.C. This historically black college developed into South Carolina State University. He resigned in 1910 under pressure from Governor Coleman Blease, whose election Miller had opposed.

Miller’s epitaph reads: “I served God and all the people. Loving the white man not less, but the Negro needed me most.” Photo source: Black Americans in Congress. Office of the Clerk, U.S. House of Representatives.

Miller returned to Charleston to work on various community causes and helped recruit 30,000 black men to the Armed Services when the U.S. was pulled into World War I. From 1923 to 1934, Miller lived in Philadelphia but came back to Charleston a few years before his death in 1938.

To the left and just behind Thomas E. Miller’s grave is that of Florian Henry Frost and his parents, Lyida Stroman Frost and Henry Main Frost. It appears that Florian and his parents were FPC. Florian only lived to the age of 25 but did a lot with his short time on Earth. Listed as a teacher in bank records, he was elected to the South Carolina House of Representatives for Williamsburg County in 1870, but died in office in 1872. 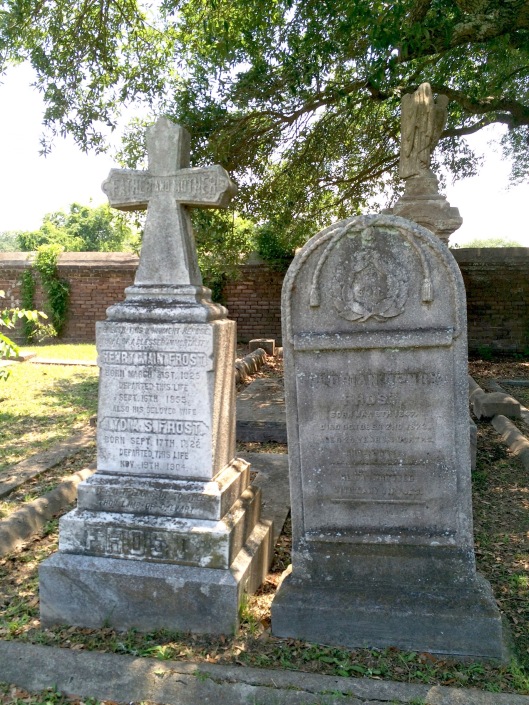 To the left is the monument to Henry Main Frost and his wife, Lydia Storman Frost. She was a rare woman in that she was a Free Person of Color who owned slaves. Their son, Florian, is buried to the right of them.

Florian’s mother was Lydia Stroman Frost. Her husband and Florian’s father, Henry, died in 1855. Lydia had four more children, but the name of their father is unknown. According to Larry Kroger’s book Black Slaveowners: Free Black Slave Masters in South Carolina, 1790-1860, Lydia was a dressmaker and a slave owner. This makes her an incredibly rare example of not only a FPC but a woman who owned slaves. She lived to be 86, dying of “senility” in 1904.

There are countless other stories among the cemeteries of the MUCD that I could tell and many I have yet to uncover. The black burial society cemeteries of North Charleston continue to fascinate me in that so little is written about them yet they are such a rich source of history.

I hope to return next summer to take another ramble.

The grave of Clarence E. Chafee is located in Friendly Union Society Cemetery. He died of consumption (tuberculosis) at the age of 23, already having established himself as a photographer.