Last week, we started our journey through Augusta’s historic Magnolia Cemetery. I shared some general history of Augusta and the cemetery. This week, we’ll jump right into learning more about Magnolia’s residents.

One of the most unique monuments I saw was for Dr. James D. Mackie.

A bachelor, Dr. Mackie graduated from the Medical College of Georgia in 1842 and lived with his parents in nearby Summerville. Augusta experienced yellow fever epidemics in 1839 and 1854. During the latter, the Catholic Church of the Most High Trinity served as a temporary hospital. Over 120 people died in a four-month period. Dr. Mackie was one of them. 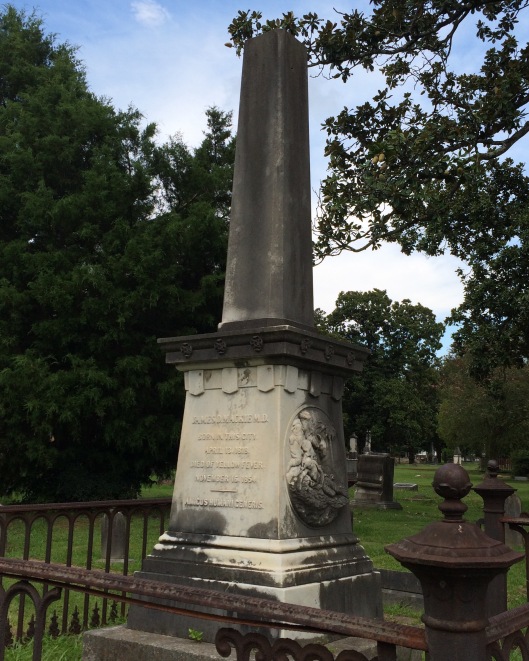 The marble monument commemorates the life of Dr. James D. Mackie, who died of the very disease he was trying to eradicate.

I found out only this week that while the monument at Magnolia was placed to honor him, Dr. Mackie is actually buried with his parents 13 miles away at Summerville Cemetery in a box grave. It features a heartfelt epitaph:

He was a good Samaritan: and freely devoted his best energies of his mind and body to the relief of the sick, until death removed him from the scene of his pious labors to commemorate, which a monument has been erected by his friends and a grateful community, in the city cemetery.

So why two monuments? My guess is that at the time, Dr. Mackie’s sacrifice so moved his friends that they wanted to erect a marker closer to the city where many more could see it. Since Dr. Mackie lived with his parents in Summerville, it makes sense that he (and later they) would be buried there. 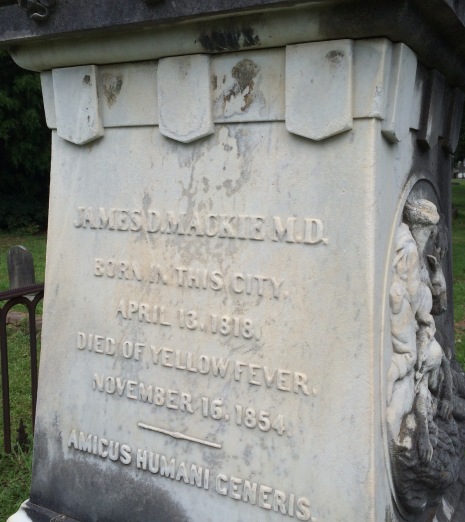 The words “Amicus Humani Generis” mean “Friend of the Human Race” in Latin.

Mackie’s Magnolia monument features the story of the Good Samaritan, recounted in the Bible in Luke 10:25-37. An injured man lies at the side of the road needing help while others pass him by. A Samaritan stops to not only give the man aid but takes him to an inn to recover, paying for his stay. In ancient times, Samaritans were considered the lowest class of people on the totem poll. This image makes me think that Dr. Mackie probably treated people from all walks of life, including the poorest of the poor. It’s a motif I have never seen on a monument before.

Dr. Mackie’s memorial monument features the ancient Biblical story of the Good Samaritan, who stopped to treat a wounded stranger on the side of the road.

Not very far from Dr. Mackie’s monument is one that’s a bit of a mystery to me. But the monument for Anne Milledge Smith Bothwell made me stop and look.

The exact identity of the two children at Anne Milledge Smith Bothwell is unknown, but they might represent a son and daughter.

A native of South Carolina, Anne Milledge Smith married James T. Bothwell. He is listed as an attorney on the 1850 Census but later records show he was a successful grocer. They had several children. Their eldest, Ebenezer, was nine when he died and daughter Julia died in infancy. It’s possible that the two children at her knee represent them.

Anne was only 38 when she died.

Anne’s husband, James, remarried. He and his second wife, Sallie, both died in 1879 within three days of each other. Sallie is buried to the left of James while Anne’s monument is to his right.

Another monument I saw was for a young man cut down in the prime of his life. Many such markers dot the landscape of Magnolia but most are not this big. 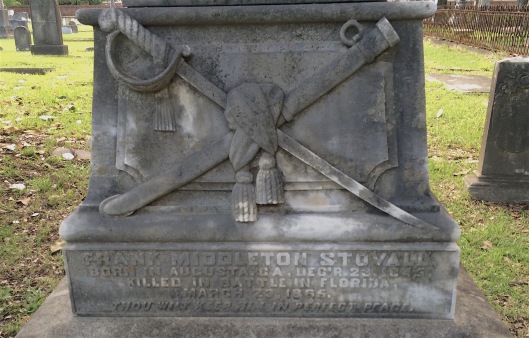 The base of Frank Middleton Stovall’s monument features the crossed sword and scabbard draped with tassels, a motif often seen on Civil War markers. His grandfather was a Confederate Brigadier General.

The eldest son of Massilon Pleasant Stovall and Margaret Amelia Speer Stovall, Frank Middleton Stovall was a Georgia native. His grandfather, Marcellus Augustus Stovall, served with distinction in the Confederacy during the Civil War. Oddly enough, his grave (also at Magnolia) is quite humble compared to that of his grandson. 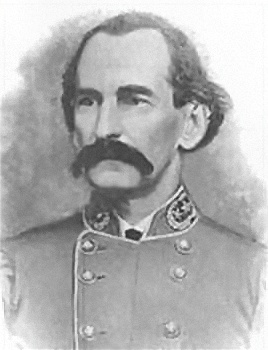 At the outbreak of the Civil War, Marcellus Stovall was a captain of a militia artillery unit when appointed Lieutenant Colonel in the Third Georgia Infantry, serving under General Kirby Smith. In January 1863, he was promoted to Brigadier General in command of a brigade in General Breckenridge’s Division, which fought at Chickamauga and in the Atlanta Campaign. After the fall of Atlanta, Brig. General Stovall commanded a brigade in General Clayton’s Division that fought at Franklin, Nashville, and in the Carolinas.

His grandson, Frank, served as a humble private in the Confederacy in the Fifth Battalion, Florida Cavalry, Company A. The Fifth Battalion served in the Department of South Carolina, Georgia, and Florida, and took an active part in the battles of Olustee, Gainesville, Milton, and Braddock’s Farm.

According to his obituary, Frank Stovall was acting as “drill master to the Infantry and Ordinance Sergeant at Marianna” when he died. I’m not sure how a private attained those responsibilities but it’s possible.

Frank Stovall died in March, just a few months before the unit surrendered at Tallahassee on May 10, 1865, about 40 miles west of Marianna, Fla. I looked at the roll for Company A. He is the only one listed as “killed in battle” among the three men who died in Company A during the war. His parents’ names are also on the base of his monument and they are buried beside him.

The two final stories I’m going to share involve the Barrett and Holt families. I knew nothing about them when I encountered their plots, but it was soon apparent both families had known much sorrow.

But William and Sarah experienced more than their fair share of tragedy. Their first three children (save for Hattie, who died at the age of 30) lived long lives. But over the span of six years, William and Sarah’s last four children would all die before reaching the age of two. 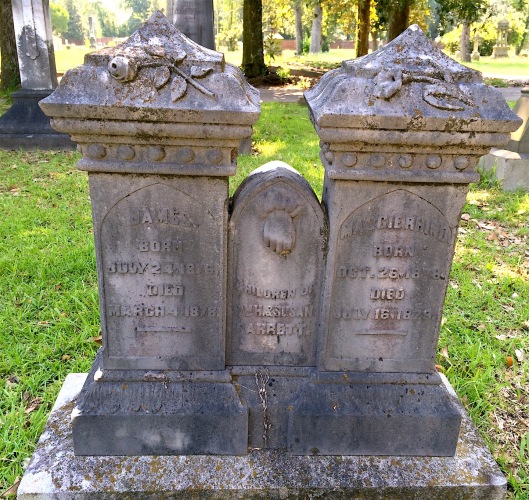 Siblings James and Maggie share a marker, with a rose carved into the top of his and a lily adorning hers.

As seen on the Bridwell Monument last week, a hand reaches down from the clouds to indicate an unexpected death.

As I’ve pointed out in this blog before, the death of a child in infancy was almost expected in the centuries before antibiotics. It was a sad but accepted fact of life. But for a family to lose four children in six years must have been an especially hard blow to take.

Sisters Mary and Susie Barrett died within exactly a month of each other in 1873.

Close to the entrance of the cemetery, you can find the graves of William White Holt and his wife, Mary Arminton Ware Holt. William was not only a commissioned officer in the War of 1812, he served as Judge of the Superior Court and was later Augusta’s mayor from 1825 to 1826.

The Holts had several children who lived to adulthood, including Dr. William James Holt, who received medals for his service as a physician during the Crimean War. Youngest son Lieutenant Benjamin Rice Holt served in the Fifth Georgia Infantry, Company A, during the Civil War. But like the Barretts, William and Mary felt the harsh hand of tragedy visit their home often.

William and Mary Holt lost at least four children in infancy and childhood. There may have been more.

Next week, I’ll share some of the diverse history of some of Magnolia’s residents, including the Jewish sections and the Augusta Orphan Asylum plot.