“In sight of the massive granite and marble monuments of the wealthy departed arc hundreds of modest graves, where just as loving hands have adorned them according to their means, and undoubtedly their occupants rest as peacefully as the others. It seems to be natural for people to select hills on which to bury their dead.”

Last week, I shared the story of Annie Dodge and the Black Angel of Council Bluffs. This week, we’re going inside the gates of Fairview Cemetery to look at some of its tree monuments and markers. One presented a mystery that I’m still untangling.

Before Council Bluffs became a city, thousands of Native Americans were sent to live on a Reservation there created for members of the Council of Three Fires of Chippewa, Ottawa and Potawatomi. The Treaty of Chicago (1833-1835) forced them to vacate Illinois, clearing the way for that city to incorporate. By 1846, the Potawatomi were forced to move again to a new reservation in Osawatomie, Kansas.

According to its Web site, Fairview’s oldest known burial was in 1826, well before the area was officially designated as Fairview Cemetery in 1846. Located in the heart of old town Council Bluffs, it was named Kanesville in 1848 after benefactor Thomas L. Kane. He helped negotiate federal permission for Mormons heading west to use Indian land along the Missouri River for their 1847-1847 winter encampment. The hill they camped on is where Fairview is located. 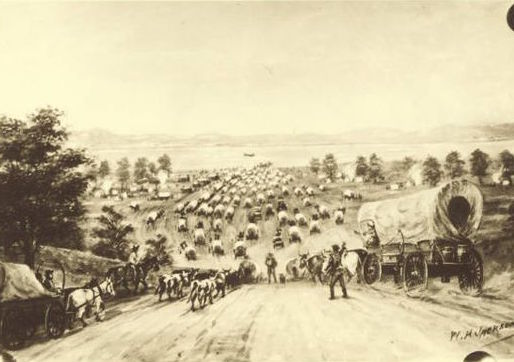 Many of the Mormons who died of exposure and disease while at the camp are buried here although few of those headstones remain intact. A plaque notes that Potawatomi Indians (Council Bluffs is located in Pottawattamie County, there’s a difference in the spelling) and other settlers are also buried here.

According to Find a Grave, Fairview has over 8,000 burials. However, an 2010 article I read said (about an Eagle Scout’s project in which he recorded all the graves) it was around 7,300. More than 2,000 graves are those of veterans, including veterans of the War of 1812 and the Civil War. A number of markers are just plain illegible due to weathering over time.

When you into Fairview, it doesn’t seem as hilly as it actually is. The front area is a gradual ascent.

Can you spot Christi in the purple top?

Around the top, some teens on skateboards were zooming around. Not a wise idea when you could find yourself flying straight into a huge granite monument! I was relieved when they left because I didn’t want them to make a permanent home there as a result of an accident.

Once you get up to the top, this is what you can see. 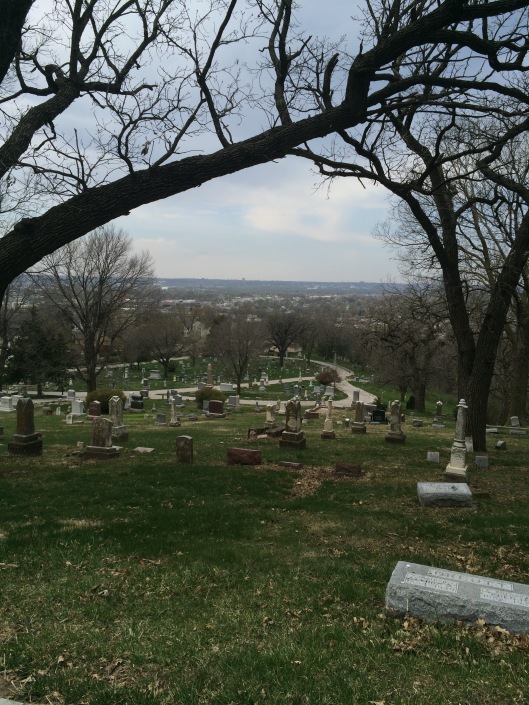 The picture I posed last week of the view of Omaha is better than this one but it still give you a good idea of how far you can see from the top.

Fairview has two things I love to see. Lots of tree-shaped monuments and white bronze (zinc) monuments. They are both endless sources of fascination for me as they can vary so greatly. Today I’m going to focus on the trees. It’s always puzzled me why they were so common in earlier times.

Of course, the fraternal order Woodmen of the World tree monuments can be found in cemeteries across the county. But there are plenty of tree monuments with no connection to WOW at all.

Let’s take a look at the tree monument for British immigrant Thomas Green. I found some great information about him thanks to Daily Nonpareil reporter Mary Lou McGinn, who wrote about a house in Council Bluffs once owned by one of Green’s daughters.

A native of Yorkshire, England, Green was born in 1818. He married Selby native Mary Anne and they had several children. According to the 1881 England Census, he operated a successful shipbuilding business in Selby with his son, Richard. Daughter Maria married George Jackson in 1869, a Selby lad who emigrated to America with his parents 10 years earlier. 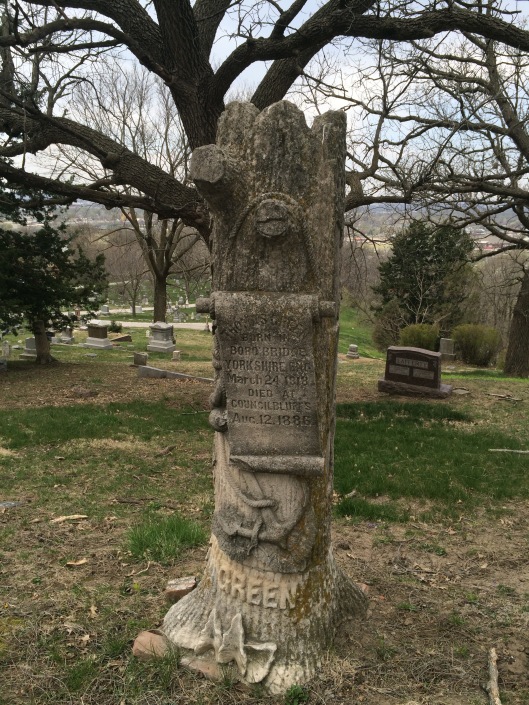 This tree monument for Thomas Green has symbols that taphophiles like myself love. Ivy (on the back) symbolizes friendship. An anchor often means hope or eternal life. Since Green was once a shipbuilder, the anchor has double significance.

Sons Richard and Robert emigrated to America in 1867 and the rest of the Greens joined them in 1871. According to H.H. Field’s “The History of Pottawattamie County”, the Greens crossed the Atlantic in 13 days and traveled by land for two before reaching Council Bluffs on June 11, 1871. Two days, really?

With sons Richard and Robert, Thomas established a lumber business called Thomas Green and Sons. In 1880, Thomas sold the business to start the Thomas Green and Sons Packing Company. Their pork packing plant, located in the Mosquito Creek valley two miles from Council Bluffs, specialized in hams and bacon. 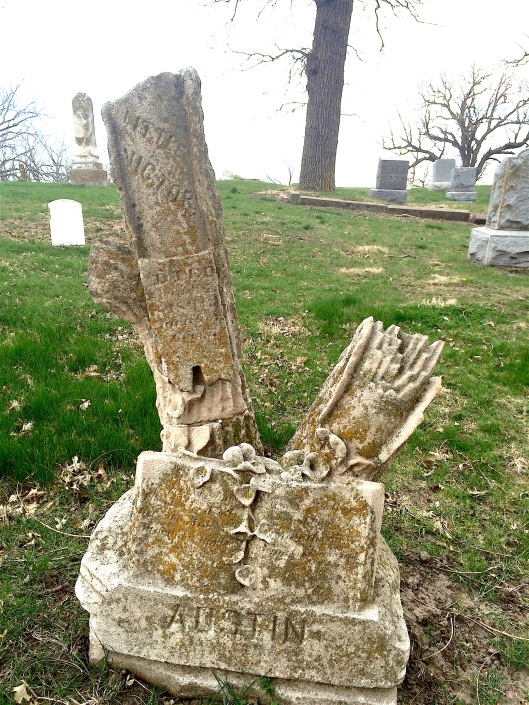 The identity of Victor’s parents and how long he lived are unknown. The calla lilies at the base often mean resurrection or beauty.

The tree monument for “Little Victor” Austin is doubly sad because beyond finding out he died in 1891, there was nothing else I could discover about him due to the condition of the marker. This broken stump-style of monument (common for children) can be seen elsewhere at Fairview.

Willie Russel was only two years old when he died in 1888. His monument notes that he was the son of William A. and Rena Russel but there is no record of their burial at Fairview. A dead dove is carved near the base, signifying a premature death.

A fallen dove lies at the base of Willie Russel’s grave, which has a base of stone logs.

Clarke Prescott’s tree monument is one I see often in cemeteries but is executed better than some and has stood the test of time well. The inscription is still easy to read. Researching his life resulted in a mystery I’m still trying to solve.

Greenleaf Clarke Prescott (as his birth records indicate) was born on Jan. 8, 1849 in Pittsfield, N.H. Not in Plattsmouth, N.H. in 1850. His parents were John and Mary Clarke Prescott, who both died in 1862, leaving Clarke an orphan at the age of 13.

The birth date on Clarke Prescott’s monument is at odds with records I found. The fern fronds at the base stand for humility and sincerity.

Clarke moved to Salinas, Kansas in 1869. In 1874, he married young widow Fannie Sawyer and they had four children of which two survived. In 1881, the Prescotts moved to Council Bluffs where Clarke worked as an agent for the Plano Harvester Works (based in Illinois) until his death in 1888.

Ancestry has records of Clarke’s will. His death resulted in a true legal mess for widow Fannie for some time because of a dispute over land claims he owned with the Union Pacific Railroad. Fairview Cemetery had a $25 claim against Clarke’s estate in 1891, indicating they weren’t paid for his burial plot.

The debt for Clarke Prescott’s grave at Fairview had not been paid three years after his death.

Fannie shared the same address as native New Yorker Lawrence Kelly in 1889, whose name appears in Fannie’s legal documents as someone working on her behalf in the case. Lawrence Kelly’s profession was marble cutter before he became retail manager of a grave monuments business. His father had sold monuments in Council Bluffs in the 1880s.

Did Lawrence Kelly purchase Clarke Prescott’s tree monument for Fannie? It would explain the high quality of it since he clearly knew the industry. Did they meet when she went to purchase one for Clarke?

Fannie married Lawrence Kelly in 1891 in Council Bluffs. She (and her children) disappear from records after that. Lawrence’s name doesn’t appear again until 1920, and by that time he was widowed but still selling grave monuments. By 1930, when he was 78 years old, he was back in New York living with his sister. Yes, still selling monuments.

What happened to Fannie and her kids? I’ll have to dig some more to find out the end of her story.

This one is for a child but the inscription is so worn and obscured by lichen, you can’t read the name.

The head of the lamb at the base has been broken off.

Here’s a variation of the tree monument, a tree trunk holding up an open book. The inscription has completely worn away so I don’t know who it was for. But whomever carved the tree stump took quite a bit of time making it.

The inscription on this monument is complete illegible.

Finally, instead of a tree stump, I liked the look of this cross made out of two logs. John R. Slack lived to the age of 30 and was a member of GAR #31, so he was likely a Civil War veteran. But that’s all I know about him.

John Slack’s monument is a nice mix of rustic and traditional.

Next time, I’ll spend some time sharing photos of some of the many white bronze (zinc) monuments at Fairview. I hope you’ll enjoy them as much as the trees.

Angels on the monument for Minnie Klopping