Planning our family vacations is a challenge I relish. When we decided on Maine for the summer of 2017, I knew we’d be visiting a cemetery hopper’s paradise.

Maine is not new territory to me. This would be my fifth adventure to the Pine Tree State. But one trip just isn’t sufficient, there’s too much to see and savor. My fellas were eager to see Acadia National Park, a place I’d only spent one day in. Most of my time has been spent on the Southern coast towns of Ogunquit, Kennebunkport, and Old Orchard Beach.

View of the Portland’s harbor at Fort Allen Park on a sunny June day.

I wasn’t a taphophile when I last visited Maine in 2002, so I got to work on a list of cemeteries I wanted to see along the way. One that was at the top of the list was Portland’s Eastern Cemetery.

Established in 1668, Eastern Cemetery is the oldest historic landscape in the city and is home to around 4,000 burials. Most cemeteries I visit that people would consider “very old” in the South are from the late 1700s, so I was very excited.

I got in touch with Ron Romano, who helped start the group Spirits Alive in 2006 to better care for and raise awareness of Eastern Cemetery. Since he’d be attending a meeting of the Association for Gravestone Studies in Alabama during the time we planned to visit Portland, he put me in the capable hands of Vana Carmona. This was one cemetery I didn’t want to wander alone without some guidance. 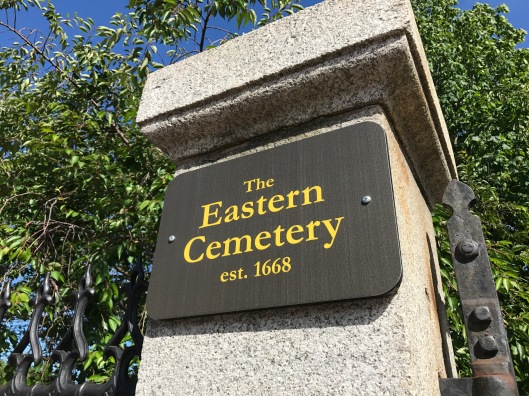 I met up with Vana after we landed in Portland and had grabbed lunch. She’s an incredibly upbeat person who gets just as excited about old cemeteries as I do. That’s always a plus.

It doesn’t take long to notice that the grave markers have much in common with the ones I’ve seen in Boston and Charleston. Winged skulls and angels from the 1700s are frequent motifs along with urns and floral themes into the early 1800s. 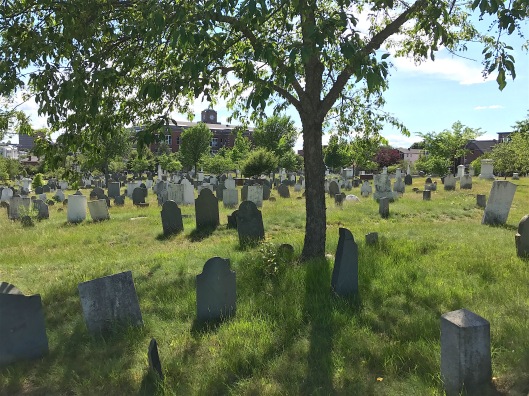 One of the awesome things about Eastern Cemetery is that we know the identity of the stone cutter who carved many of the markers there: Bartlett Adams. You can read about him in Ron’s book, Early Gravestones in Southern Maine: The Genius of Bartlett Adams. If you visit the Spirits Alive website, you can find a spreadsheet Ron created that lists exactly which markers Adams carved (very helpful to me as I wrote this).

Born in 1776 in Massachusetts, Bartlett Adams learned his trade as a teenage apprentice for his brother-in-law. In 1800, at age 24, he came to Portland and advertised his skills in the local newspaper. He mentioned he had a “flock of Italian marble and Quincy slate stone” in his possession.

These are emblematic of Bartlett Adams’ style, which helps identify the stones he carved. (Photo source: Spirits Alive web page.)

Adams owned the only stonecutting shop in the Portland area from 1800 to 1828. His shop also made hearthstones, mantel pieces, and other finished stones. At least eight other stonecutters worked with him, including his brother Richard, two nephews, and others who would eventually enjoy their own success. About 700 of Eastern’s markers, although they are unsigned and unmarked, were carved by Adams or the men who worked in his shop.

Among Adams’ works at Eastview is a double marker for Polly and Eunice Moody, infant daughters of mechanic William and Mary “Molly” Young Moody. You can see the umbrella-like design he carved on top of it, almost sheltering the little girls below. I’ve not seen this motif anywhere else.

Both Polly and Eunice Moody died in infancy. Their brother, Lemuel, lived into his 50s and served in the War of 1812.

Adams also created a single umbrella-style grave marker for William and Molly’s daughter, Harriet. She died in 1799, only nine months old. Harriet is buried beside her mother.

Little Harriet Moody died in infancy like her sisters.

Molly died at the age of 41 in August 1799, a few months before Harriet would pass away. Notice Adams’ intricate carving of the urn above the inscription on her marker and the twining vines. The urn is thought to  testify to the death of the body and the dust into which the dead body will return, while the spirit of the departed eternally rests with God.

Molly Moody died only a few months before her daughter, Harriet.

But Adams would save his most skillful Moody marker carving for father William, who died in 1821 at the age of 65. Records indicate he served in the Revolutionary War. If his marker is to be believed, he died on his birthday.

There’s quite a few elements on William’s markers to catch the eye. Like Molly’s, his has an urn but Willilam’s sits atop a brick base and beams radiate out from it. Intricate carving edges the sides, with two pillars on either side of the inscription. Adams put quite a bit of work into it.

Next week, I’ll share more of Bartlett Adams’ work and how his markers can be found in other New England cemeteries. 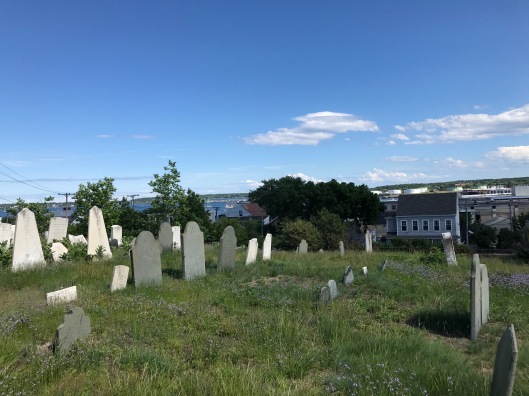 You can see Portland’s harbor from Eastern Cemetery.