So I’m still in Charleston, this time at St. Lawrence Cemetery. Located next to the massive Magnolia Cemetery (I’ll be writing about that one later) and just down the street from Bethany Cemetery. There’s a Jewish cemetery to the right, but it was locked up the day I went to visit. Maybe I’ll get a chance at it this summer.

A note of caution. St. Lawrence Cemetery is located in front of a large housing project, not exactly the safest part of town. I advise anyone to do what I do at every cemetery I visit. Leave your valuables at home and not in your car. The day I was there, two police cars were parked across the street from the cemetery entrance as I drove in. When I drove out later, they were handcuffing someone. 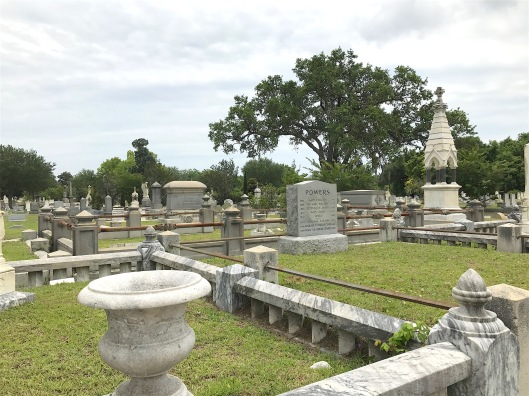 St. Lawrence Cemetery is not very big. But it’s definitely worth a stop.

Due to overcrowding, Bishop Reynolds purchased 18 acres from Edward Tharin at a cost of $2,500 in 1851. Reynolds officially opened St. Lawrence Cemetery in 1854.

So while St. Lawrence is not exactly huge, it’s worth a look. The variety of monuments and the history they reveal is stunning. Some Catholic cemeteries I visit are often a little dull because they stick to featuring the Saints and that’s about it. St. Lawrence is not like that at all.

When you drive in, you cannot miss the iron cross smack dab in the middle of the drive, which apparently is still a plot. Under it are the remains of German native Christopher Werner and his wife, Isabella. She provided it to the cemetery to use as her husband’s monument when he died in 1874. Christopher had created it himself. 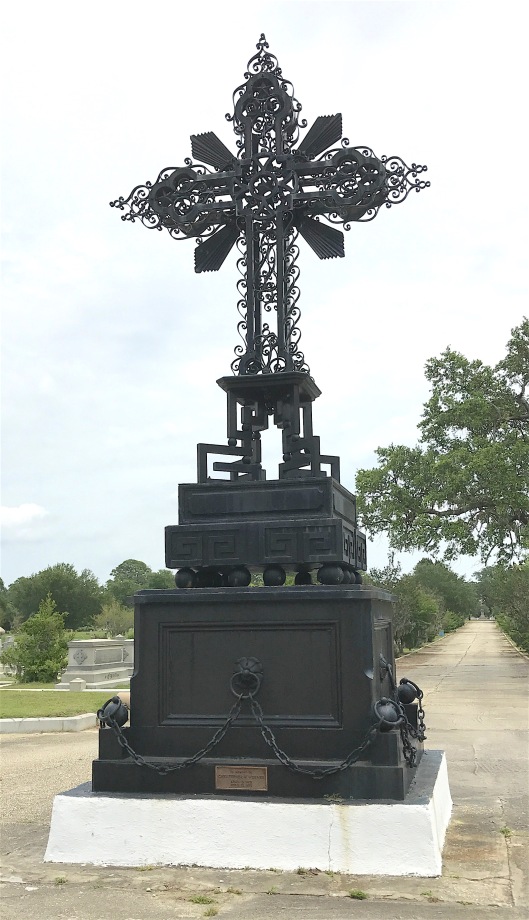 This intricately detailed wrought iron cross was created by the man whom is buried beneath it, Christopher Werner.

A native of Munster, Germany, Christopher came to America sometime in the 1830s and became a citizen in 1839. The son of a blacksmith, he learned the trade from his father. In Charleston, he was known as a blacksmith, carriage maker, wrought iron worker, and a skilled businessman. He married Isabella, a native of England, in 1841 and they had six children together, one dying in childhood. 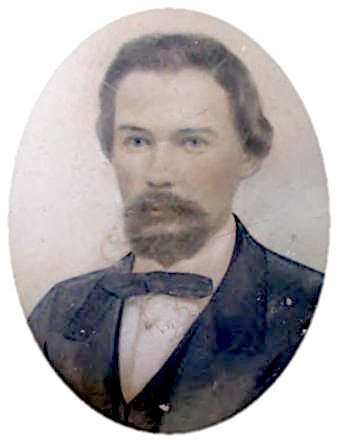 Christopher Werner is responsible for some of Charleston’s most beautiful ironwork.

With a foundry located on the corner of Cumberland and State Streets, Christopher’s business expanded from carriage making into a large, diverse enterprise throughout the state. He had a reputation for quality work and was sought after for his skill. I was thrilled to learn that some of the beautiful wrought ironwork over at Bethany Cemetery was done by his hand. You can still see it all over Charleston today. 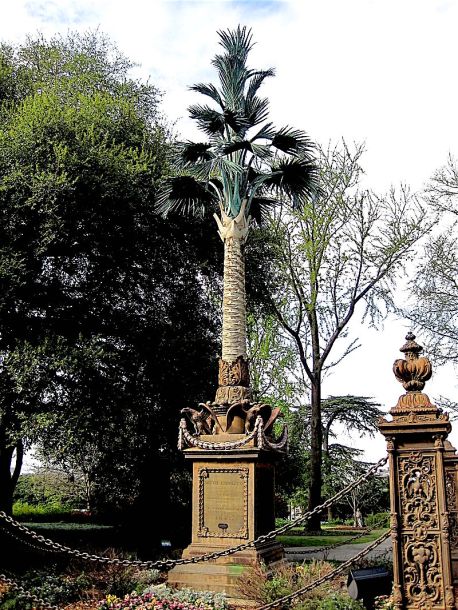 The Palmetto Regiment monument stood on the Capitol grounds until it was shattered by a tornado in February 1939. It was designed by Henry Steenken, who worked in Werner’s shop. The monument was later restored. (Photo source: Brian Powell)

According to a 1907 newspaper report, Werner’s ironwork could also be seen at Mayor R. Goodwyn Rhett’s house on Broad Street in Charleston, now the John Rutledge House Inn (Rutledge built the house for his bride in 1763) when Werner did the wrought ironwork for then-owner Thomas N. Gadsden. You can see it there today. 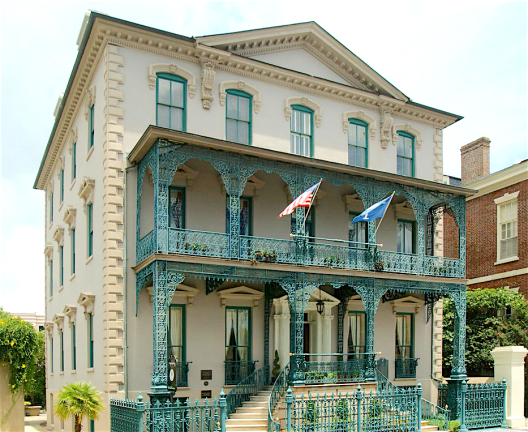 Now known as the John Rutledge House Inn, the house was owned by Thomas Gadsden when Christopher Werner added the wrought iron work to it. (Photo source: Trip Advisor)

Christopher Werner died in 1874. Father Daniel J. Quigley, a priest from Charleston’s Roman Catholic Cathedral officiated at the funeral. Isabella died in 1894 and is buried with him. According to Find a Grave, when the monumental cross was dismantled to be restored, the remains of both were found.

You may remember last week I featured the monument of Behrend Hollings, a German immigrant turned successful grocery merchant. I found one of his sons, Edward, buried at St. Lawrence. An attorney, he was married to Anna O’Rourke in 1886 and had two children. He died at the age of 39 of malarial fever. 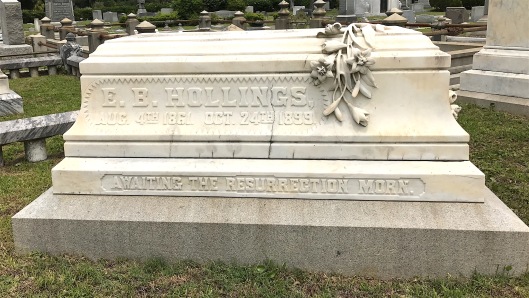 Lawyer E.B. Hollings left behind a wife and two children when he died at the age of 39. The calla lilies on his monument are in excellent condition.

There are several Irish families buried at St. Lawrence. The Darcy monument says “erected by their sister” and I’ve deduced that it must be the latest name on it, Margaret Darcy Sheridan, who died in 1910. A large marker simply reading “sister” is next to it. John, Tim and Patrick are also listed on the other sides. All hailed from Tipperary, Ireland.

The Darcy siblings are featured on this beautiful monument. 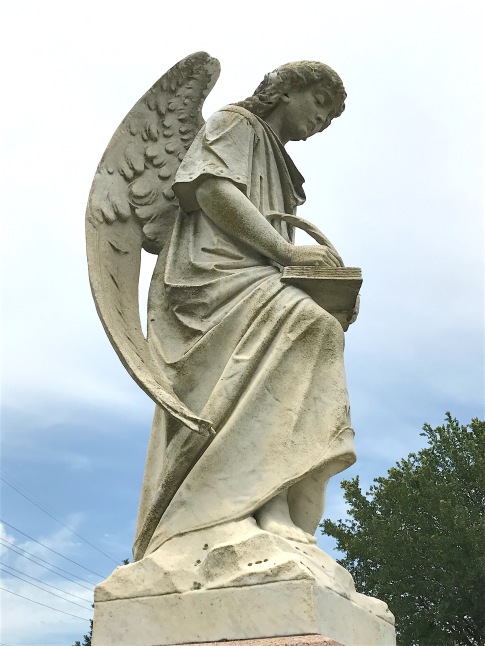 Tim and John died in their 20s and 30s but Patrick lived into his late 60s, a long-established owner of a shoe and boot store on King Street. He also owned several properties in Charleston when he died in 1906.

Several Italian families are also buried at St. Lawrence, including 24 members of the Sotille family. Descended from five brothers (Giovanni, Nicholas, Santo, Albert, and James) who emigrated to Charleston in the 1880s from Gangi, Sicility, there are still Sotilles living in the area today. Their mausoleum is lovely. 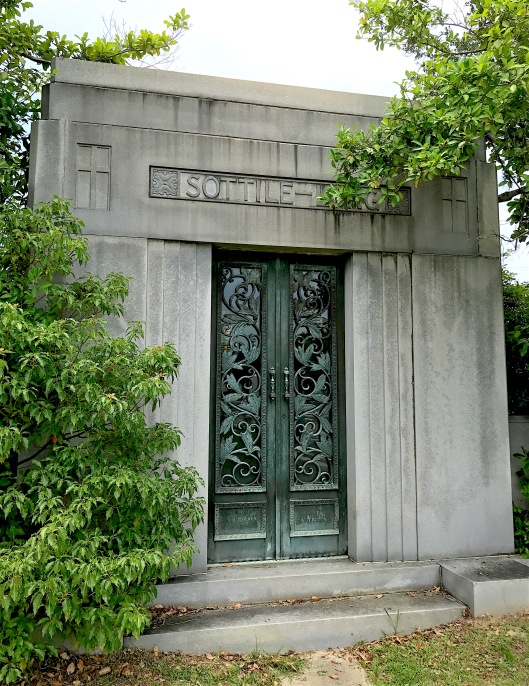 Salvatore and Rosina Albergamo Sottile of Gangi, Sicily, had a total of seven children who emigrated to the United States. Five brothers came first. After Salvatore’s death, Rosina came to America with daughter Marie and son Joseph.

As president of the Pastime Amusement Company, Albert Sotille built what was originally called the Gloria Theater in 1922. With 2,000 seats, the Sotille Theater was the largest of its kind in the state and also served as a vaudeville house. The South Carolina premiere of “Gone With the Wind” was held there with most of the cast present. After closing in 1975, the Sotille Theater was eventually purchased and restored by the College of Charleston. It now hosts a wide variety of performing art events. 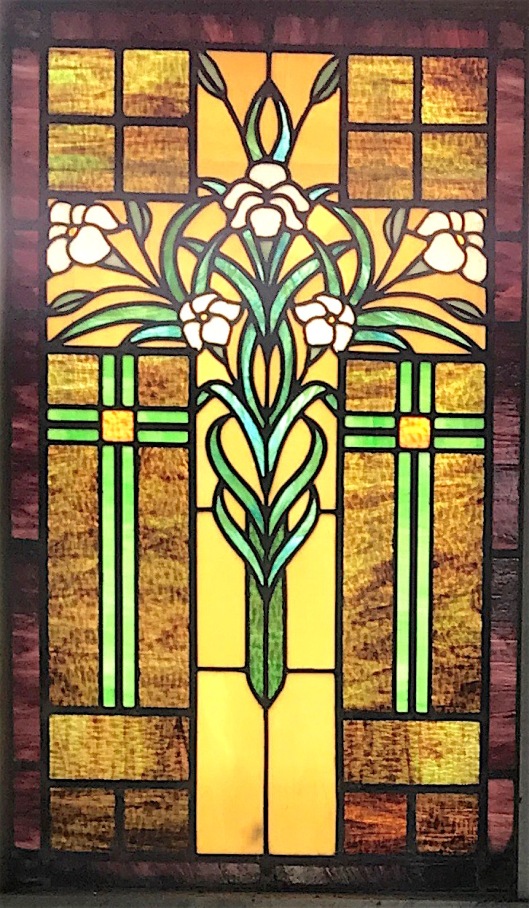 The stained glass inside the Sotille family mausoleum.

Another mausoleum for an Italian immigrant got my attention. It’s quite different from the polished Sotille family tomb. This one houses only one person, Rosa Cervetti. She was a native of Chavari, Italy and born in 1834. I don’t know her maiden name but she married Angelo Cervetti in 1870. His profession is listed in some places as a cigar maker or shoe retailer, and as a fisherman in others. 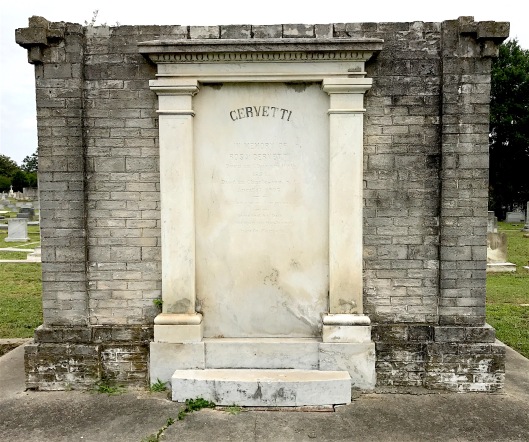 Rosa Cervetti’s mausoleum is in poor condition and looks unfinished.

Rosa died in 1907 at the age of 73. I learned that Angelo remarried to a woman named Nellie. But Angelo’s demise is shrouded in mystery. By doing a search, I was surprised to find a “missing” poster seeking his whereabouts. You can even purchase this notice on eBay or Amazon. 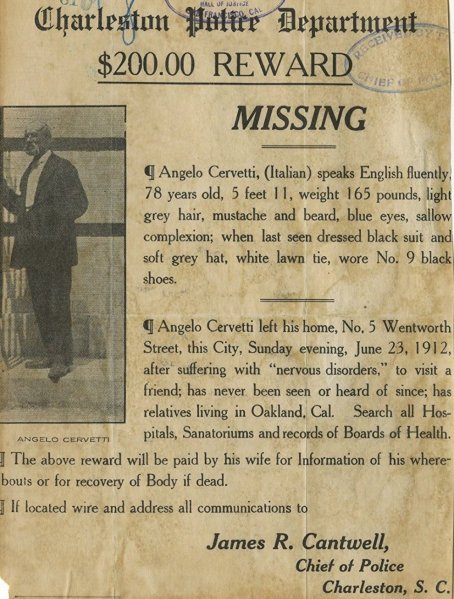 The mystery of what happened to Angelo Cervetti has not been solved as far as I know.

I don’t think Angelo and Rosa had any children and if they did, they are not listed as being buried at St. Lawrence. Angelo is not listed on Find a Grave. So if he ever did come home to Nellie, it was never reported.

The last mausoleum I wanted to share is for the Hunt family. It has no door on it so you can actually walk right in, a rarity in my experience. The last interment was 1982. While it was a treat to be able to go inside, it worries me that the stained glass is exposed to the elements and possible vandalism. 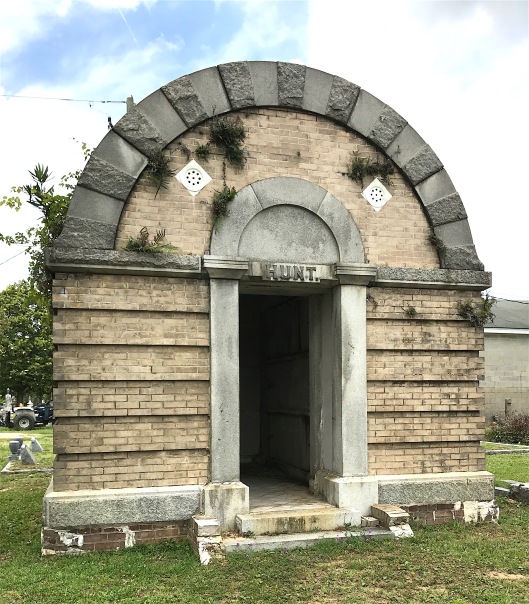 I don’t know what happened to the door of the Hunt family mausoleum.

The son of Massachusetts native Nathaniel and Anne Rivers Hunt, Nathaniel A. Hunt was born in South Carolina in 1842. He married Catherine Goodrich in 1872 and they had at least two children, Florence and Alvah. Like Patrick Darcy, he did well as a wholesale shoe merchant and at some point, was vice president of a bank. Son Alvah was an 1894 graduate of the College of Charleston and also attended Yale. 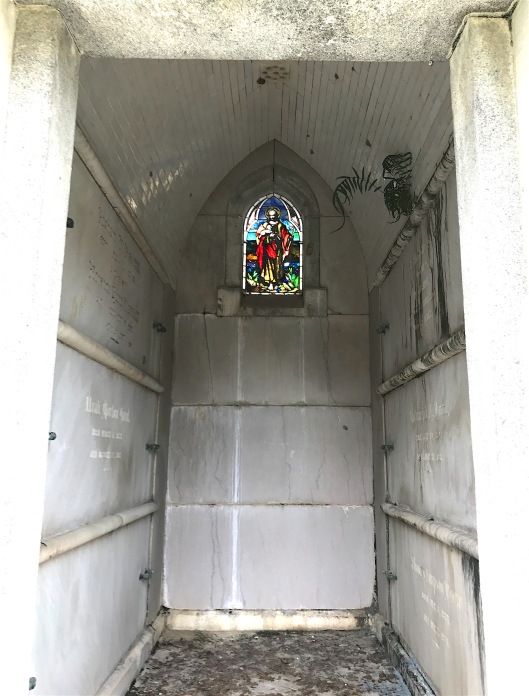 The last interment in the Hunt mausoleum was in 1982 with the death of Florence Hunt Maxwell.

Catherine died of tuberculosis in 1902 at the age of 52. Nathaniel died in 1918 of kidney disease. Their son, Alvah, died the same year in October of tuberculosis. His occupation is listed as “retired” on his death certificate. His wife, Emily, may have remarried since she is not buried in the mausoleum with him. 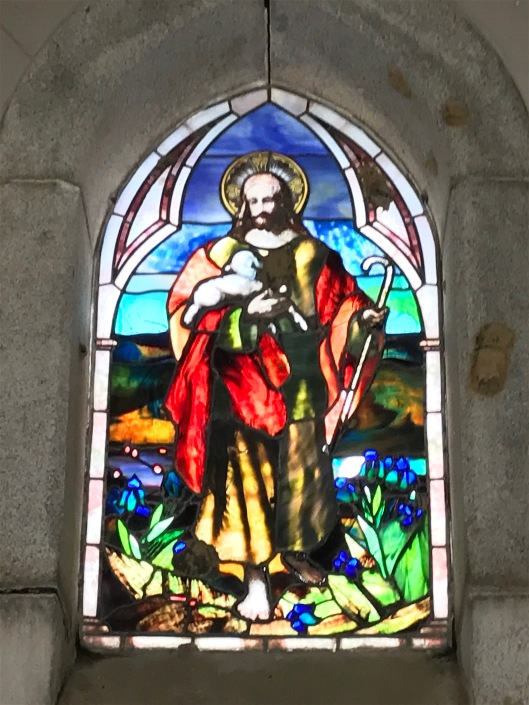 Hopefully, the stained glass in the open mausoleum will not be a target for vandalism.

Next time, I’ll share the story of the Sisters of Mercy buried at St. Lawrence Cemetery. 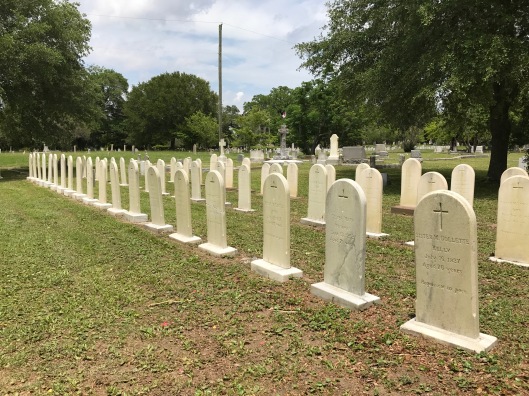