We’re back at Riverside Cemetery in Marshalltown, Iowa.

One of the town’s beloved sons was Sergeant Charles Willard Peckham, who created magic in the skies when he flew. The following details and photos came from research done by Riverside’s staff. They told me where his stone was located but because we were in a bit of a rush that day, I didn’t find it. But his story is still worth sharing.

Born on August 4, 1897, Peckham graduated from Marshalltown High School in 1916. After a year at the state university, he enlisted in the American Expeditionary Forces in May 1917 during World War I and went to France later that summer. He joined the 103rd Aero Squadron of the Lafayette Escadrille, part of the WW I French Air Service, which consisted of mostly of volunteer American pilots flying fighter planes. 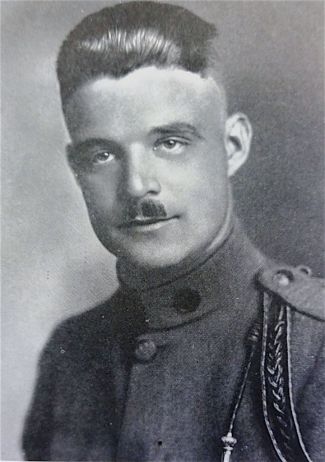 During this time, Peckham was cited for bravery three times and promoted to first class sergeant. At one point, it was feared he was captured but the rumors were fortunately untrue. He sent home to his father a fabric Iron Cross he’d cut from a downed German airplane.

Peckham was the lone pilot in the Lafayette Escadrille to be chosen by his commanding officer for appointment to West Point. But when the war ended, Peckham was done with military life. He came back to America and joined a “flying circus,” touring the country promoting victory loans (bonds issued to help pay for the war).

Peckham joined the Iowa Aero Company of Des Moines, which performed at an event on Friday, August 22, 1919 in Des Moines, with 100 or so people present. He and another pilot gave rides to spectators that day. Later, despite earlier engine problems, the pilot managed to get the plane started and up in the air, and Peckham stepped out onto the wing.

The plane began to tailspin and Peckham dropped 1,000 feet to the earth, enduring fractures below the knees of both legs and a fracture of the base of his skull. He was moved to the Methodist Hospital, where he died on Sunday, August 26, 1919, with his parents beside him.

Sgt. Charles W. Peckham is buried beside his parents at Riverside. (Photo source: Find a Grave.com)

A local newspaper article reported that two members of the Iowa Aero Company who were also servicemen would fly over the grave and “drop flowers as was done in France when a member of the air service was laid to rest.” The photo above the grave marker photo is believed to be of Peckham’s funeral at Riverside Cemetery, part of a cache of photos from the The Gold Star Museum at Camp Dodge in Des Moines.

I also want to mention James Christopher “Sunny Jim” Dunn and his wife, Edith Dunn. Both were trailblazers of a sort, although for different reasons.

Born in Marshalltown in 1864, Dunn met Henry Anson (whose son “Cap” was a Major League Baseball player in its infancy) when he went to work for the A. E. Shorthill Company, where the elder Anson was also employed. He convinced Anson to lend him money to start his own business, first in the coal industry, then in railroad contracting.

It was Dunn’s partnership in a railroad construction firm that sent his fortunes rising and he eventually became a millionaire. He and his wife, Edith Forney Dunn, lived in a mansion in Chicago. They had no children. 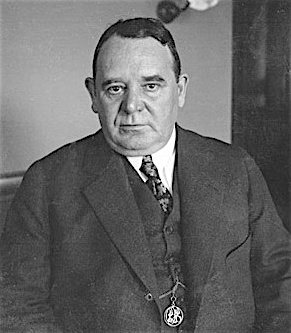 In 1916, Dunn was recruited by American League president Ban Johnson to head up a syndicate to buy the Cleveland Indians baseball team from Charles Somers for $500,000. During his tenure, the team’s ballpark League Park was renamed Dunn Field, although the name reverted back to League Park in 1927. In 1920, the Indians won their first World Series.

When Dunn died of influenza in 1922 at the age of 57, he left his entire estate worth $390,000 to Edith. That included control of the Cleveland Indians, making her one of the first women to own a MLB team.

When Jim Dunn died in 1922, he left his entire estate to his wife, Edith.

That alone might have made Edith a unique woman of her time but there was something else that caught my attention. Edith remarried a man named George Pross. A native of New York, Pross was 24 years Edith’s junior. He worked as a policeman in New York City before moving to California to become a private detective for the Burns Detective Agency. His name pops up in several issues of “True Detective” magazine in the 1920s.

In 1927, ownership of the Indians changed hands when Edith sold the franchise for $1 million to a group headed by Alva Bradley. By 1930, Edith and George were living in a fine home in Pasadena, Calif. before moving to Los Angeles. A year after Edith died in 1946, George remarried. He died in 1967 and is buried in California with his second wife.

Edith remarried to George Pross, who was 24 years her senior, and spent her last years in California.

Jim and Edith (despite her remarriage) are buried beside each other in Riverside. Despite becoming a wealthy man who had moved away, Dunn always considered Marshalltown “my hometown” and wished to be buried there.

I was delighted to see a large white bronze monument representing the Shetler family. It looks like the woman, holding a laurel wreath (which can mean victory, distinction, eternity or immortality) beside an anchor, is unfortunately missing a hand. 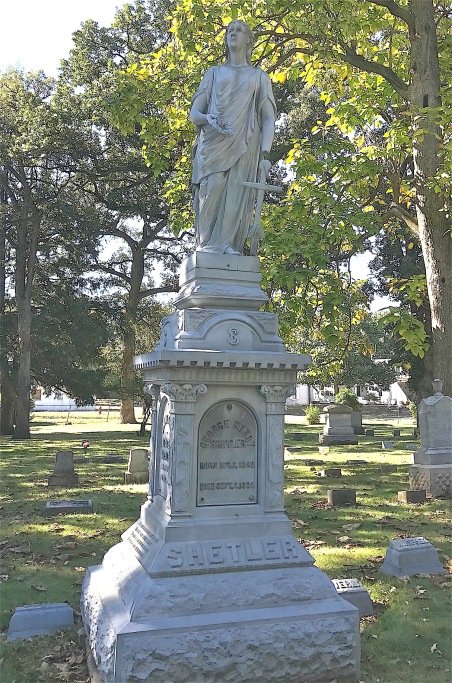 The Shetler family monument has a total of seven people listed on it.

A native of Germany, George H. Shetler arrived in America in 1833. He married Ohio native Martha Smith in 1838 in Kentucky. They had several children. In 1857, they moved to Marshalltown where George Sr. farmed. Later, he and his two sons, George Jr. and James, operated a successful harness business. Martha died in 1886 and George Senior died in 1901.

Unfortunately, George H. Shetler, Sr. died without a will. This caused much angst concerning how his estate would be divided up, especially some land tracts. It went as far as the Iowa State Supreme Court before it was all sorted out and by that time (1906), son James had died as well in 1904.

The Shetler monument is one of the largest white bronzes I’ve seen.

You don’t see these with every white bronze monument, but the Shetlers had individual plates featuring the first names of the deceased. George Sr. and wife Martha are “Father” and “Mother.”

This marker is for Waverly Shetler, the son of George Jr. and grandson of George Sr. . He attended pharmacy school at then-State University of Iowa (now the University of Iowa) in the 1880s and was a practicing pharmacist for a few years. Then in 1895 he graduated from the Colorado School of Mines in Golden, Colo. Why he switched careers midstream is a mystery. He died in 1901 at the age of 33 in El Paso, Texas.

Records indicated that Waverly Shetler had attended pharmacy school at what is now the University of Iowa and the Colorado School of Mines to become an engineer. He died in El Paso, Texas.

One last footnote about this cemetery. I didn’t learn until after my visit that Riverside Cemetery is supposed to have a “death chair” on the premises. I did not see it while I was there but if you Google it, you can see pictures of it.

I’ve seen stone chairs like it before (some are called “the Devil’s Chair”) and many of them have legends attached to them. The story with this one goes that if you sit on Riverside’s “death chair” at midnight, you will die within the year. So if you’re into that kind of thing, you can keep an eye out for it.

Next time, we’ll visit nearby Timber Creek Cemetery. It’s much smaller than Riverside but still has some stories to share.