Last week I finished up my four-part series on Knoxville’s Old Gray Cemetery. It’s a vast cemetery with plenty of important people to write about. I thoroughly enjoyed visiting there.

But much of the time, you’re going to find me in a place like Pleasant Hill Cemetery in Lenoir City, Tenn. It’s a cemetery out in the country, maybe 30 miles west of downtown Knoxville. No towering obelisks. No massive monuments. But I always manage to find some interesting tales even in nondescript burial grounds like these.

Pleasant Hill Cemetery was established around 1844.

In 1997, Pleasant Hill Cemetery Inc., of Loudon County was formed to oversee continuing care of the grounds. It has a volunteer board of directors. Routine mowing and trimming are handled regularly. While this is guaranteed, families are responsible for the upkeep and maintenance of the grave markers.

Pleasant Hill Cemetery also allows green burials (no embalming or vaults required), something pretty rare these days. It was a welcome surprise.

It was a sunny day just after Christmas 2017 when I stopped to look around Pleasant Hill Cemetery, which is situated on a pretty hillside. According to Find a Grave, it has about 1,300 recorded graves. The cemetery website noted there are about 500 grave sites still available for purchase.

While this cemetery has been around for a while, the earliest graves I saw were from around the turn of the century. There were, I noted, rough-edged fieldstones indicating there were some much older graves there.

Woodmen of the World Tree Markers

I noticed two tree monuments from Woodmen of the World, the fraternal organization turned insurance company. The first was for Robert M. Williams (1869-1912). His marker, though worn, indicates it was a Modern Woodmen of America (MWA) one. When Joseph Cullen Root founded the fraternal organization in 1883, that’s what it was called. Later he would drop the “Modern” and it would be simply “Woodmen of the World”.

The Modern Woodmen of America motto “Pur Autre Vie” (For the Life of Others) is inscribed on the marker.

Born in 1869, Robert was the oldest son of Samuel Pike Williams and Sarah Hudson Williams. He was married to Delia Melton Williams and they had seven children. According to the 1910 Census, both he and one of his sons, Earl, were working in a car factory. Robert died of heart failure of the age of 42 in 1913. Delia died in 1949 and is buried beside him.

The other tree marker is for Henry Edwin Markwood (1873-1916). As you can see, it’s only three years older than Robert’s but has the more well known Woodmen of the World seal on it. Both markers have a calla lily at the base, which was often meant to symbolize marriage or resurrection.

Henry Markwood served in the U.S. Army during the Spanish American War.

Henry was the youngest son of Lewis Anderson Markwood and Lucinda Gilbert Markwood. A military record indicates he served in Company E of the Florida Volunteer Infantry as a carpenter from 1898 to 1900 during the Spanish American War. The men were trained for an invasion of Cuba that never took place.

Henry returned to Loudon County and married Clora Williams (who may have been related to Robert Williams) in 1905. The 1910 Census indicates they were living in Monroe, La. with their two daughters while Henry worked as a contractor. At some point after 1913, the Markwoods returned to Loudon County. Clora died on Oct. 27, 1915. I could find no death record for her but Henry died on May 23, 1916 of a cerebral hemorrhage. He was 42, the same age as Robert Williams.

I noticed a double gravemarker for two women nearby and realized they were for two of the wives of Clarence Esco (C.E) Lebow. It turns out C.E. had a total of four wives altogether, a first in my book. I spent a good bit of time looking into his life and uncovered what I consider a sad story akin to a soap opera.

Born in August 1890 to Alfred Taylor Lebow and Ellen Hicks Lebow, C.E. grew up in a large family in Blount County, Tenn. Ellen was Alfred’s third wife, the previous two having died. This would be a pattern C.E. also followed.

When C.E. married Lula Viles in Loudon County in March 1909, she already had a daughter named Lena, born in 1907. The couple had a son, Clarence Ray, in August 1910. Lula died on Dec. 15, 1918 of tuberculosis at the age of 33. Lena went to live with her birth uncle’s family before marrying in 1923 and having three sons. She was divorced by 1930 and I could trace her no further. I don’t know what happened to Clarence Ray.

Only two months after Lula’s death on Feb. 7, 1919, Clarence married Bessie Fay Pierce. She died on Christmas Day 1920 at the age of 20, also of tuberculosis. Both wives are buried at Pleasant Hill Cemetery and share a marker, something I don’t often see. 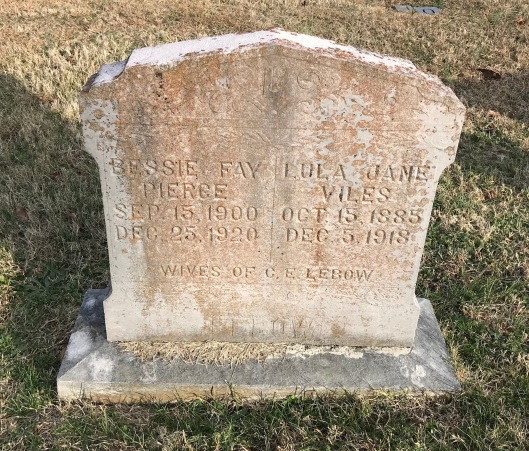 There are some question marks surrounding C.E.’s 1921 marriage to Georgia native Lillian “Lillie” Pauline Carey because I found no record for it. Census records indicate she would have been in her teens. Lillie had a son, Virgil, on Jan. 15, 1921 and I’m not sure who the father was. C.E. and Lillie had a daughter, Margaret, in 1924. Lillie died in April 1931 and is listed as buried at Pleasant Hill but has no marker. I could not find her cause of death.

After Lillie died, Virgil was sent to live at the Williams/Henson Lutheran Boys’ Home in Knoxville. Margaret was sent to the Mayhurst Girls’ School in Louisville, Ky., a school founded by nuns in the 1840s for homeless girls. She would go on to marry and have a family, dying in 2011 in Virginia.

Clarence remarried a fourth and final time to Emma Mays in October 1932. She already had a son, Oscar. By this time, Clarence was working at Knoxville Knit Mills, one of the city’s many underwear/hosiery mills. He would spend eight years employed by them. 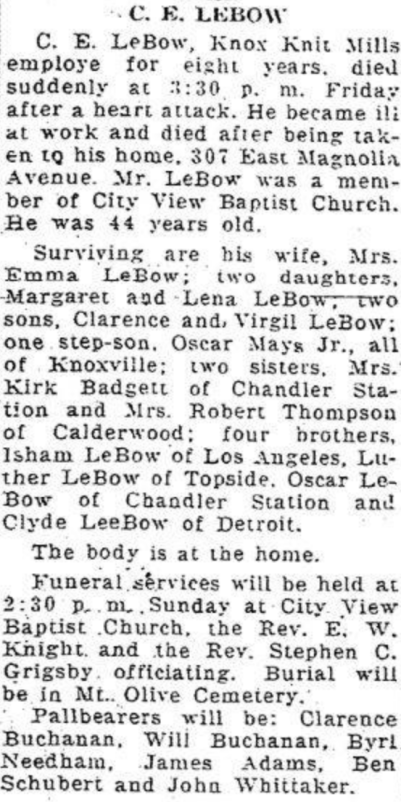 C.E. Lebow was only 44 when he died but had already outlived three of his wives. (Photo source: Knoxville News-Sentinel Feb 23, 1935 page 7)

On Feb. 22, 1935, Clarence Esco Lebow died shortly after having a heart attack. He was buried at Mount Olive Cemetery in Knoxville. Emma’s name and date of birth are also on the marker but with no death date. Thanks to some help from Gaye Collins Dillon, who belongs to a genealogy Facebook group I am a member of, I learned that Emma remarried to German immigrant Henry Ruehr, who died in 1941. She died in 1984 and is buried in Fort Myers City Cemetery in Florida.

Sadly, on Oct. 9, 1936, Virgil Lebow was delivering papers for the Knoxville News-Sentinel when he was in a car accident that ended his life at the age of 14. He is buried in Bethel Lutheran Cemetery, a small family cemetery connected with the Williams/Henson Lutheran Boys’ Home. His marker has yet to be photographed, although a 1990 inventory lists it. It is located less than a mile from where the only father he ever knew, C.E. Lebow, is buried.

I could find nothing more about Clarence Ray Lebow, although someone on Ancestry noted he had changed the spelling of his last name and possibly spent time in prison. I cannot verify if that is true.

In researching this story, I felt especially sad for the wives and children of C.E. Lebow. It seemed C.E. had a zest for marriage but not for parenthood since the children were all sent to live elsewhere after their mothers died (except for his last step-son, Oscar Mays). It’s possible he didn’t have the money to support them but he had the means to marry. In the end, C.E. is buried alone, something he probably never pictured happening.

Finally, I found the grave of an East Tennessee celebrity. When I saw the name “Wampler”, I immediately thought of the sausage ads I’ve heard on the radio when my husband tunes in to University of Tennessee Volunteer football games.

Although he credited his father Riley Wampler, Ted Wampler, Sr. is considered the true founder of Wampler’s Farm Sausage. Born in Loudon County in 1929, Ted remembers his father smoking sausage in a little tin shack on the tenant farm where they lived when he was a child. Riley went door to door during the Great Depression selling it to neighbors, stopping briefly during World War II. 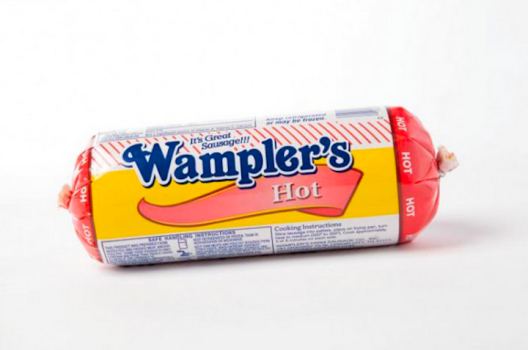 “After World War II, little mom and pop stores sprung up everywhere so Dad suggested we re-open the slaughter house. So we did. We each invested $1,100,” Ted Sr. said.

By the 1950s, it became a corporation. In 1981, the family officially changed the name from Wampler’s Wholesale Meats to Wampler’s Farm Sausage Company. The company’s sausage is sold under the Wampler name as well as many private label brands. The Wampler plant, located in Lenoir City, employs about 150 people.

I didn’t expect to find as much as I did at Pleasant Hill Cemetery but it was a trip worth taking. Then again, just about every cemetery hop is.

I could find nothing about Nellie Adkins. She died in 1945.