This week I’m wrapping up my series on Charleston, S.C.’s First Scots Presbyterian Churchyard. There was simply too many great stones to not have a Part III!

So to finish up, I’m featuring a few more stories. This first stone is unlike any I’ve featured so far because there are no urns, weeping widows, or soul effigies. Not even a cross or broken tree. How’s that for a surprise?

This marker for Captain John Morrison and his wife, Elizabeth, was most likely carved in 1821 (when John died) or 1852 when the wife died. Because it is topped with a Scotch Thistle, the national flower of Scotland (Capt. Morrison’s home), my guess is that it was carved in 1821 and his wife’s name was added after her death three decades later. It is located beside the Walker marker I featured last week in Part I.

The inscription on for the Morrison marker is now so faint that I had to look on Find a Grave to read what it says.

So why is the Scotch Thistle the national flower of Scotland? According to legend, an invading Norse army was attempting to sneak up upon a Scottish army’s encampment one night. During this operation, a barefoot Norseman stepped on a thistle, causing him to cry out, alerting Scots to the presence of the Norse invaders. Some sources suggest the specific occasion was the Battle of Largs in 1263, but that’s not certain.

A closeup of the thistle on the Morrison marker.

At some point, John met and married a British woman named Elizabeth Watson. They had at least one child, a daughter named Mary Flora born in 1811.

Here’s a picture of the real thing. (Photo source: Ian Georgeson, the Scotsman.com)

Capt. John Morrison’s house still stands at 125 Tradd Street. You might recall from last week’s Part II that Dr. Fayssoux owned the house at 126 Tradd Street. Morrison bought the property at 125 in 1800 and the construction date is thought to be sometime around 1805.

A historic plaque on the house states that it is noted “for its handsome four bay facade facing Tradd Street, and for its expansive three-tiered piazzas which were added in the 1840s. The house is also noted for its Adam style interiors and for the large scale of its primary rooms and entrance hall.”

Here’s a picture of Capt. Morrison’s house, which sold for $3.96 million to a tech entrepreneur in November 2017.

The home of Captain John Morrison and his family on 125 Tradd Street was purchased in 2017 for almost $4 million dollars. (Photo source: Wikipedia Commons)

Mary Flora was only nine when her father died on Feb. 26, 1821. His marker says that he was 56 when he died while his death record indicates he was 65. The cause of death was influenza. If you look at his death notice below from the Charleston Daily Courier, his funeral was held at his house on Tradd Street, although at that time it was numbered 97 instead of 125.

Elizabeth lived another three decades. At the time of her death in 1852, she was living with daughter Mary Flora, who had married a cooper named Robert Bee, and her grandchildren. She died of cancer on June 26, 1852. Her death notice indicates her funeral was held at First Scots Presbyterian Church.

The final marker I’m going to share with you is for Charleston Governor Brigadier General John Geddes and some of his family. While it features the names of five people, John Geddes is the best known. His political climb made him a successful figure in Charleston, but it came with a price as a result of some of his choices.

Born in 1777, John Geddes graduated from the College of Charleston, studied law and was admitted to the bar in 1797. He was active in the South Carolina Militia, serving as a Cavalry Major.

John Geddes was married twice and the names of both wives are on this marker. On May 30, 1798, he married Harriet Chalmers, a daughter of Charleston artisan Gilbert Chalmers. After Harriet’s death in 1803, he married Ann Chalmers on March 28, 1805, who died the following year. The marriages produced at least three children, John Jr., Harriet, and Gilbert. Since both women had the last name of Chalmers, Harriet and Ann may have been related but I could not trace exactly how.

While this marker features five different people, South Carolina Governor John Geddes is the best known. It includes his wives, his eldest son, and a grandchild.

After Geddes left the office of Governor in 1820, he still retained a great deal of power and influence in Charleston. In October 1822, his son John Jr. acquired the Charleston City Gazette, which became the organ of the Geddes faction.

John Geddes was involved in at least two duels during his career. The first took place with political opponent and Federalist Keating Lewis Simons. In 1823, Simons and Geddes met on Sullivan’s Island. Simons was wounded and limped the rest of his life.

In 1824, Geddes found himself the target of some scurrilous comments from 28-year-old Edward Simons, a cousin of Keating Lewis Simons. Feeling his honor had been insulted, Geddes challenged Simons to a duel. This time, Geddes gave his younger son Gilbert the task of acting as his “second”. Gilbert was incensed at Simons’ remarks against his father and may have asked to take his place.

On Johnson’s Island in Charleston’s harbor (another report called it Fort Johnson and the duel happening at high noon), Gilbert faced Edward Simons. Four different rounds passed between the two men at a decreasing distance with neither being wounded. On the fifth round, Gilbert was shot in both thighs and Edward Simons was hit in the chest, a wound from which he died. One article I read noted that Gilbert’s wounds rendered him a cripple for the rest of his life, but I don’t know if that’s true.

Death of Father and Son

On March 4, 1828, John Geddes had a stroke and died. It’s listed as “apoplexy” in the death records. Sadly, his oldest son, John Jr., would die only a few hours later on the same day of “debility”, which is thought to be physical weakness. He was 28 a the time of his death.

When I looked for newspaper accounts of the Geddes deaths, I found this interesting diagram in the March 6 edition of the Charleston Courier that laid out what order in which the elaborate funeral procession was to be placed that went from the Geddes home on Meeting Street to First Scots Presbyterian Church.

The March 6 edition of the Charleston Courier featured this diagram of the elaborate funeral procession planned for former South Carolina Gov. John Geddes and his son, John Jr. Note that “citizens and strangers” were to bring up the rear. (Photo source: The Charleston Courier.)

The Geddes marker notes that John Jr.’s “remains lie beneath the tomb of Gilbert Chalmers at the Northwest corner of the square.” Gilbert, who had been wounded in 1824 in the duel with Edward Simons, died of brain fever in 1848 at the age of 40. While there is a memorial for him on Find a Grave as being buried at First Scots Presbyterian, there is no photo of it.

I’m not sure which churchyard or cemetery I’ll be featuring next week but I’ll still be in Charleston. I’ve still got a few more to share. 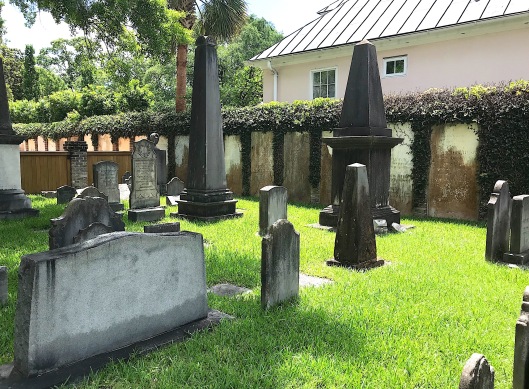