This week, I’m heading to the far corner of Sioux City, Iowa’s Floyd Cemetery. That’s where you can find Mount Carmel Cemetery. They have a small sign but I didn’t see it when we were there. I think we entered through the side and not the official entrance. I admit we did not spend as much time there as I usually do because we needed to be on the road to Sioux Falls to check into our hotel that evening.

The view from Mount Carmel Cemetery.

The Jewish Community of Sioux City

I found a helpful article detailing some of the history behind Sioux City’s early Jewish community. Finding a place to bury their dead was in the forefront of their minds. Rabbi Simon Glazer noted in his 1904 history, “The Jews of Iowa,” about Sioux City:

It is very remarkable that the few Jewish pioneers of Sioux City should have thought of death before any form of an organization was considered. For in 1869, when their entire number did not exceed 25 souls, a meeting took place among them and its prime object was a cemetery.

The first Jewish burial ground was in an area called Cole’s Addition on land donated by Godfrey Hattenbach, thought to be the first Jewish settler to arrive in Sioux City around 1857. In 1884, the Mount Sinai Cemetery Association was established by the Jewish Ladies Society with the goal of purchasing a section of Floyd Cemetery for burial purposes as one of its objectives. The original cemetery in Cole’s Addition was sold and the bodies buried there were transferred to the new cemetery, named Mount Carmel. 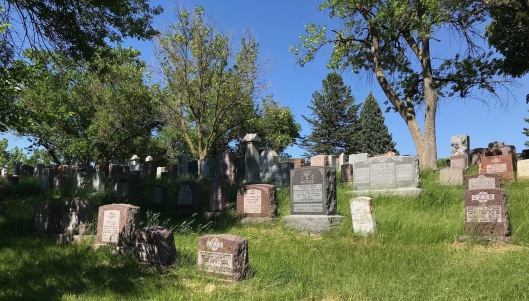 Because the markers are so close together, I am guessing mowing here can be treacherous work.

Christi and I stuck to the corner where we entered for the most past. Like many Jewish cemeteries, the grave markers are closely situated beside each other to maximize space. I thought to myself that it looked due for a good mowing but I felt sorry for anyone with that task. Getting a mower in there has to be a difficult task and the grass grows even faster in the summer.

The crypt of Rabbi Moses Meir Matlin got my attention because of its size and construction.

Rabbi Matlin’s wife is buried beside him.

A native of Slutsk, Lithuania, Moses Matlin was born in 1855. He studied at yeshivas in Slutsk and Kovno. After being ordained, Rabbi Matlin was invited by Rabbi Jacob Joseph to come to New York to become a dayyan (rabbinic judge) in the beth din (rabbinical court) Joseph was setting up there.

Once there, Joseph put Rabbi Matlin in charge of the kosher supervision services under his authority. For the next 20 years, Rabbi Matlin served as a mashgiach, supervising the kashrut (Hebrew dietary status) of kosher establishments.

Part of Rabbi Matlin’s duties included working with the California Wine Association of New York. On his way back from a trip out west, he stopped in Sioux City to visit friends. Because of chronic health issues, Matlin was eager for a quieter life in a better climate. He moved with his wife to Montana soon after when he received a land grant there, his children having already grown up and left home.

There are holes on each side of the tomb so I took a peek. All I could see were some aluminum cans at the bottom.

Rabbi Matlin hoped to create a model Jewish community and earn his living as a farmer in Montana but because he had no experience in it, that didn’t pan out. He returned to Sioux City, where he assumed a rabbinical pulpit and earned the respect of the community. He died in 1927 at the age of 72. His wife, Esther Anna, died the following year and she is buried beside him.

Someone Jewish might be able to explain why Rabbi Matlin’s crypt has a hole on each side. I could not resist looking inside. All I could see were some aluminum cans and broken glass. You cannot see his casket, which is ensconced in stone.

Strangers in a Strange Land

As I began looking into the lives behind the gravestones at Mount Carmel, some similarities began to emerge beyond a shared religion. Many of the folks here were immigrants who left their homeland (mostly former Soviet Union countries) for a new life in a strange country. Not only was the language different but so was the landscape. Some prospered while others faced unexpected circumstances.

I photographed the stone of a child, Morton Blotcky, knowing nothing about him. He was born on May 15, 1908 and died on June 27, 1910. There are no other Blotckys in the cemetery so he is alone. I got curious so I began to dig and a sad tale emerged.

Morton’s grandfather was Joseph Blotcky, a native of Lithuania who came to America in the 1870s and married fellow Lithuanian Dora Frankel. Joseph operated a dry goods store with his brother in Des Moines and prospered. They branched out to other Iowa towns, including Onawa, at times.

Joseph and Dora had four children and the youngest was Charles “Charlie”, born in 1883. He worked for his father from time to time in his stores. From what I could gather, he got into a fair share of mischief and even participated in local theatrics. But in 1907, at age 24, it appeared he was ready to settle down with an Omaha miss named Ida Grossman, who was the daughter of Rabbi Leib Grossman (later Graceman). Their wedding in Omaha was announced in the Sioux City newspaper.

Sadly, things went sour quickly for the couple. According to court proceedings, soon after the birth of little Morton in 1908, Charlie gave up any interest in his marriage and deserted the family. Newspaper accounts detail the efforts Ida had to go to in order to obtain financial support for her and Morton, who died of scarlet fever in June 1910. The divorce was granted in December 1910, with Ida asking to take her maiden name back.

Ida and Charlie’s paths diverged after that. Charlie went to live with his brother and began working as a traveling salesman. He died in Chicago following a stomach operation in 1913. He is buried in the Blotcky plot with his parents at Jewish Glendale Cemetery in Des Moines, Iowa.

Ida’s story has a much happier ending. She remarried in 1913 to Casper Gilinsky, a Sioux City wholesale merchant, and it was a much more stable union. They had two sons and moved to Minnesota before settling in Muncie, Indiana in the 1930s. Casper died suddenly at age 58 in 1943. Ida died in 1966. They are buried together at Mount Sinai Cemetery, which is also within Floyd Cemetery. So she’s closer to Morton than I first thought.

Headed for the Falls

We got back on the road after that so we’d get to Sioux Falls before dark. The adventure was far from over. Join me next time for some South Dakota cemetery hopping.