Today I’m diving deep into why I consider my visit to Le Mars Cemetery my favorite part of my Iowa/South Dakota road trip with Christi in June 2018. It really boils down to two words: white bronze.

This block for Annie McCurdy is made of metal and not stone. Zinc markers marketed as “white bronze” became a hot trend in the 1880s.

White bronze is really just a fancy term for zinc, which is a metal. White bronze markers became popular starting in the 1880s. While there were a few different companies, Monumental Bronze of Bridgeport, Conn. was the largest with a number of subsidiary factories in Detroit, Chicago, Des Moines, Philadelphia, St. Thomas, Canada, and perhaps New Orleans. Around the start of World War I, all metal was needed for munitions so the factories started closing. The name/date plates continued to be manufactured into the 1930s.

This is the cover of the 1882 Monumental Bronze Co.’s catalog. Many thanks to Smithsonian Libraries for putting this online to use as a great resource.

An agent for the company could show you a catalog of all the possibilities/costs available. The pieces were shipped by train and you put them together. At the time, they were marketed as a less expensive, longer lasting alternative to stone. But some people thought if you bought them for a loved one, you were being “cheap” so a little bit of a stigma existed.

I found this bit of marketing in the 1882 Monumental Bronze catalog:

There being no deterioration in their value, you always have in these your money’s worth; while, with marble, or even granite, what you obtained at great expense, may, in a few years, become of little or no value, as defective headstones and monuments in every cemetery bear witness. Is it not then the part of wisdom to invest where you will always feel satisfied with your purchase, and also give better satisfaction to coming generations.

Some insist that all the casting was done in Bridgeport and only finishing work was carried out by the subsidiaries. However, rail cars loaded with zinc rolled regularly into Des Moines from Kansas with material for the Western White Bronze Co., so it’s likely that casting occurred there, too.

I did find ads from the 1891 editions of the Le Mars Semi-Weekly Sentinel promoting a salesman named John Bogen who sold grave markers (both stone and white bronze) at a local furniture store, a common practice in those days. I got a kick out of how the quote used is attributed to “Science”. I did note that according to Find a Grave, Bogen is buried at Le Mars Cemetery but has a stone marker. Did he decide, in the end, not to put his faith in “Science”?

John Bogen promoted the value of white bronze markers but chose a stone one for his own grave.

This marker for Catherine Garman (they misspelled her last name as “Germen”) is a good example of a smaller white bronze. There are two more like it that I saw for other people.

White bronze marker for Catherine Garmon, although it says “Catherina Germen”. She only lived the last few years of her life in Le Mars with her married daughter and family.

On the back is a lily of the valley suspended by a cuffed hand.

The lily of the valley usually symbolized symbolizes innocence, humility, and renewal.

Having the 1882 catalog to refer to, I found an example there that looks much like the Garman marker. Size would vary depending on need.

This is possibly what the Garman family saw in the Monumental Bronze catalog, if they were given the chance to look at one.

I did notice that Catherine’s daughter, Mary Anna Elizabeth Garman Hamm, has a large stone marker nearby.

For those of us who adore “zinckies” (as we call them), finding certain examples of them in a cemetery can be very exciting. Before visiting Le Mars Cemetery, I had only seen a white bronze lamb marker online. To my amazement, Le Mars has not one but FOUR of them! I’m going to share all of them with you here.

Friderick Knuth was only seven months old when he died on May 30, 1891.

Theresa Caroline Utech passed away at the age of five weeks and five days on Sept. 7, 1883.

I think I may have found the answer as to why Le Mars Cemetery has so many lambs.

The final one pictured is a for a boy named Edward Patzig, who died in February 1889 at the age of 16 months. An item I found in the newspaper from November 1890 indicating Louis Patzig and his family were moving to Des Moines where he would be selling white bronze monuments and working with his wife’s relative, Joseph Clos, as an undertaker. It’s possible that Louis Patzig, already known in Le Mars, sold the other lambs to his former neighbors. Louis’ mother, Johannah Patzig, is buried nearby.

Sadly, white bronze was a popular choice for families mourning the loss of their children. Several examples of this can be found here. If any family knew loss, it was the Traeders.

Originally from Germany, Albert Traeder came to America with his family around 1865. 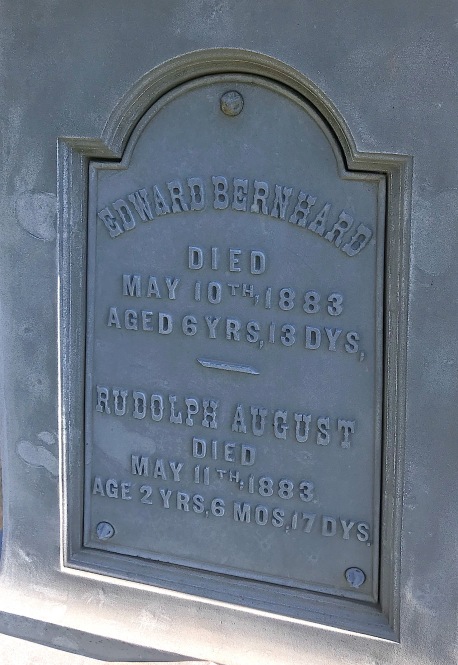 Scarlet fever ravaged the Traeder home in early May 1883. Six-year-old Eddy died on May 10, 1883. Two-year-old Rudy died the next day.

Tragedy struck again on Aug. 15, 1884 when Albert Sr. died at the age of 34 from “brain fever”, as it was called. Today it might have been called encephalitis. 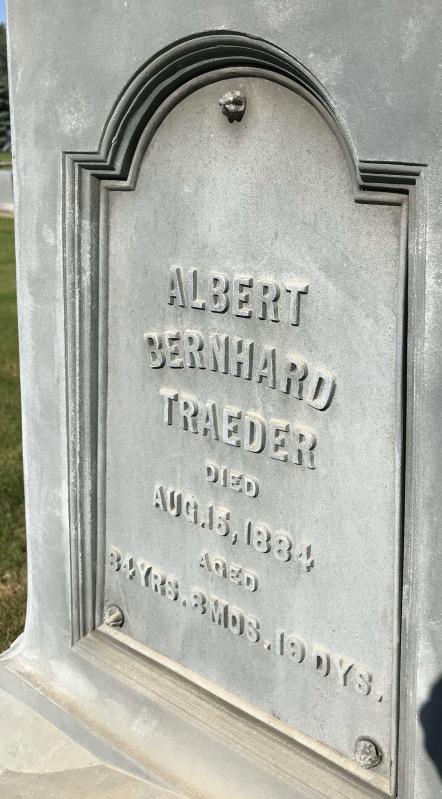 Only 34, carpenter Albert B. Traeder Sr. was much loved by his community.

It’s not surprising that the family chose what the Monumental Bronze catalog refers to as the “Suffer the Children” design for one of the panels.

“Suffer the Children” is a motif reflecting Matthew 19:14.

At the foot of the monument are two name plates for the boys and their father. Such plates are often damaged by mowers and end up in sad shape. But it appears the Traeder ones are holding up fairly well.

Bertha’s woes were not yet over. On May 28, 1886, Lora died from complications stemming from the croup and diphtheria. She has her own stone at Le Mars Cemetery.

Bertha didn’t let these tragedies stop her from making a life for her and Albert Jr. She became a successful businesswoman in the community. She waited until 1908 to remarry to Henry Frevert, when Albert Jr. was 24.

Albert Jr. married in 1917 to Victoria Dionne. They had one child, Patricia, in 1920 and Victoria died soon after. With the help of Bertha, Albert raised Patricia. Bertha died in 1932. When Patricia was 16, he remarried. He died 13 years later in 1949.

I found plenty of markers for older people as well. This one for the Blackwells is an example. Catharine is one one side and husband Henry’s on the other.

Born in 1823, Henry emigrated from Canada and settled in Le Mars. Catharine was about nine years his senior. I don’t know what year they married but four children followed.

“The Angels Took Her Home”

Catharine died in August 1880 at the age of 66, I don’t know what from. Henry must have mourned her greatly. The words at the bottom of her marker read: “She faltered by the wayside, and the angels took her home.”

The news account of his death notes that Henry was an “old man” nearing 70 when he was actually only 63. It also said he was suffering from rheumatism and “felt for some time that death would be a great release.”

On April 18, 1886, Henry was alone in his room at the home he shared with his son, William, and his family. He somehow managed to rig a shotgun against a plank at the bottom of his bed and shot himself in the chest. His family raced to help him but it was too late.

His epitaph reads: “Where immortal spirits reign, there we shall meet again.”

There are many more white bronze stories left to share from Le Mars Cemetery. Stay tuned for Part III.

Annie McCurdy, whose block you saw at the start of this post, also has a full monument at Le Mars Cemetery. She died in 1885 at the age of 28.