I mentioned last week that I didn’t spend much time at Old Calvary Cemetery in Dallas due to the rising temperature that day. The same holds true for next door’s Temple Emanu-El Cemetery. But I spent even less time there for another reason that has never happened to me before.

When I walked through from Old Calvary Cemetery (there’s a paved path between the two), it wasn’t long before two dogs came running toward me barking angrily. I was frozen in place and fearing the worst when a voice called for them to stop. Thankfully, they did. It turns out one of the caretakers had brought his dogs with him to work. While the caretaker was very nice, the dogs weren’t nearly as friendly. 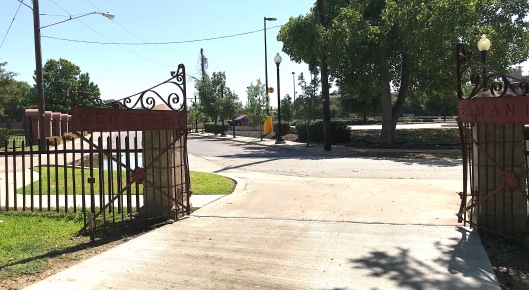 Front gates of Temple Emanu-El Cemetery in Dallas, Texas. Since I entered through the connecting path from Old Calvary Cemetery, I did not see it until I was leaving.

The caretaker assured me they wouldn’t hurt me but I was not so sure how they’d behave if I encountered them again when he was busy doing his work elsewhere in the cemetery. So I didn’t explore much after that. What you’ll see are the few pictures I took there that day.

This sign explains the detailed history of the first Jewish cemetery in Dallas and how the second, Temple Emanu-El, came to be.

When a young Jewish man died in Dallas in June 1872 who was a stranger to the city, the small Jewish community of Dallas felt it was their responsibility to give him a proper burial. A group of 11 young men formed the Hebrew Benevolent Society and secured land for a burial plot on Akard Street from Mayor Henry Ervay. There were already cemeteries there for the Odd Fellows and Masons so it made sense at the time.

When plans were made in 1956 to build the Dallas Civic Center on the property where these graves were located, they were moved to Temple Emanu-El Cemetery.

Birth of a New Jewish Cemetery

The congregation of Temple Emanu-El was established around 1875 and met at their temple on Commerce Street that opened in 1876. The majority of members were Eastern European immigrants. In 1884, the trustees of Temple Emanu-El purchased land from the John Cole family. The first burials were those of Russian immigrants Aaron L. Levy and Jacob Rosenthal.

I didn’t learn until this week that one of the mausoleums I photographed held the remains of a Dallas businessman known more for his passion for baseball than his success as a businessman. Much of his delightful story I found in an article written by his granddaughter May Sebel.

The Biggest Baseball Fan in Dallas

Born in 1878 in Buffalo, Texas, Hyman Pearlstone lived in Palestine, Texas with his family. He operated a successful wholesale grocery business and served on a number of corporate boards. But the true love of his life (after his wife, Claire) was baseball.

Hyman coached the Palestine Elks and in 1905, he went to New Orleans on business. The Philadelphia Athletics (today known as the Oakland A’s) were staying at the same hotel when one of the players saw Hyman wearing an Elks pin. He introduced him to Doc Powers, catcher for the team. Hyman invited Doc to attend the theater with him that evening. Doc Powers told him that the A’s next spring training would be in Marlin, Texas, just down the road from Palestine. Doc invited Hyman to come watch the team. 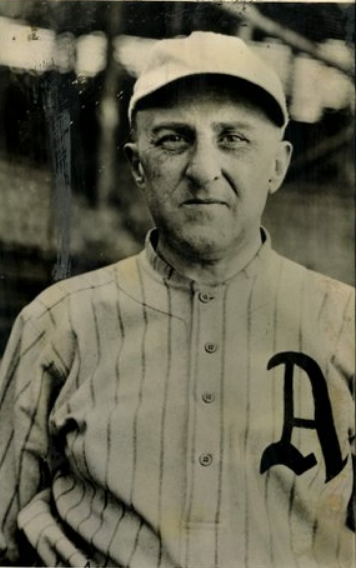 Dallas businessman Hyman Pearlstone traveled with the Philadelphia A’s for a month every summer for 45 years. (Photo source: http://www.Jewishbaseballmuseum.com)

The following year, at the hotel in Marlin, Hyman introduced himself to the legendary Connie Mack, who was manager, treasurer, and part owner of the Athletics. A longtime friendship began at that meeting.

Following spring training, Hyman received a large box from Connie Mack containing a baseball uniform, shoes, hat, and a glove. There was also a note from Mack inviting Hyman to spend his summer vacations traveling with the team. For Hyman, it was a dream come true!

For the next 45 years, Hyman spent one month of the summer doing just that. He would pitch to the team during practice in the early years, but later did some scouting and advised players on business matters. Hyman and Connie were guests of the Macks at every World Series, and this tradition continued even after Mack sold the team in 1955. 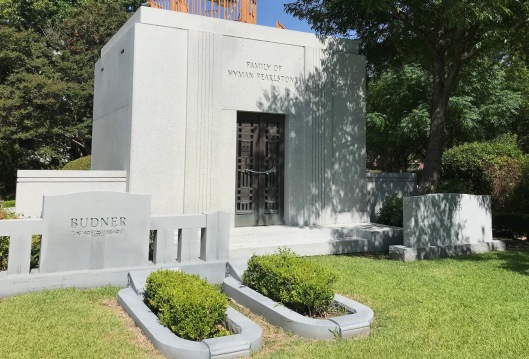 When Hyman died in 1966, his baseball memorabilia was sent to the National Baseball Hall of Fame in Cooperstown, N.Y. Hyman Pearlstone is the only known “civilian” to ever have traveled with a Major League Baseball team.

One of the sweetest markers I have ever seen is this one for Gerald Cohn. I didn’t know whose grave it was when I photographed it because I did not see that his name and dates were on the back of the base under the “shell”. I found out later by looking at the surname of “Cohn” on the marker behind it on Find a Grave.

Gerald was the son of Leopold and Sarah Cohn.

Born on July 19, 1886, Gerald was the son of German-born Leopold and Sarah Baer Cohn. I believe Sarah was Leopold’s second wife because he is listed as a widower in the 1880 Census and was living with his two sons, Albert and Bernard. He married Sarah Baer in Dallas on Jan. 30, 1881. Newspapers from 1884 advertise his barber shop on the corner of Lamar and Main Streets.

Bernard died at the age of five on Jan. 19, 1882 and is also buried at Temple Emanu-El Cemetery. There is another stone for an infant daughter born to Leopold and Sarah, but the dates are blurry.

This photo of the back of Gerald Cohn’s grave marker comes from Find a Grave.

Gerald died on June 5, 1888, having lived a year, 10 months, and 17 days. I have seen a number of shell graves of this nature over the years, but this is the first time I’ve seen a lamb in the shell instead of a sleeping child. In this case, it is a lamb resting on an elegant cushion with tassels on the corners. 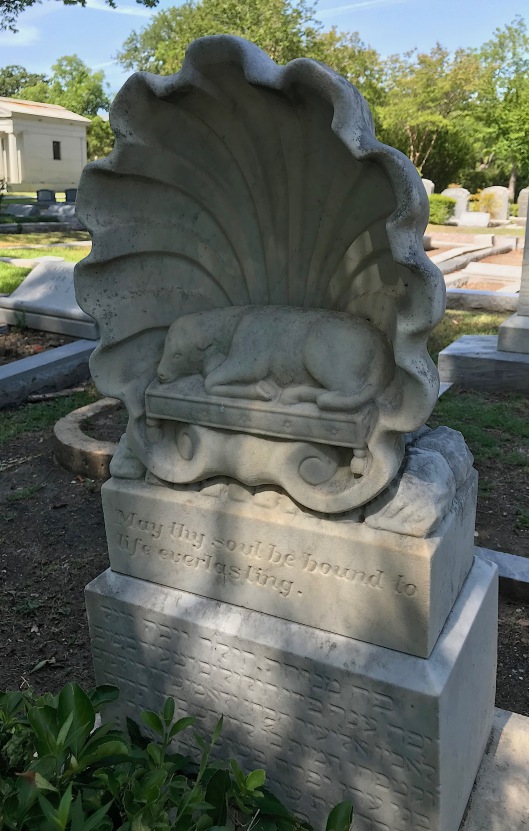 The epitaph “May they soul to bound to everlasting.” comes from Samuel 25:29 in the Old Testament of the Bible.

I was heading to the back gate to find Chris in the rental car when an unusual marker caught my eye. It was definitely different than most of the markers I’d seen that entire day so I wandered over to get a better look.

Born in 1884, Alex Wesiberg was the son of Russian immigrants. Some records indicate he himself was born in Russia but others say he was born in Waco, Texas. He married Marie Kahn in New York in 1920. He was working as an attorney by that time. Together, Alex and Marie had three children.

At the time of Alex’s death in 1951 from a heart ailment, he was an attorney in his own firm, Thompson, Knight, Wright, Weisberg, and Simmons. His death notice indicates he’d not only been involved in city planning but had been head of the Dallas Art Association. That told me Alex likely had an eye for the unusual. I think his monument, which he shares with Marie, expresses that. She died on Nov. 5, 1979.

Attorney and art lover Alex Weisberg died in 1951 at the age of 66.

Temple Emanu-El has an Alex Weisberg Library so I am believing it was created in his memory.

3 thoughts on “Deep in the Heart of Dallas, Texas: A Quick Jaunt Through Temple Emanu-El Cemetery”