When I talk to people about cemetery hopping, I am almost always asked the same question.

Have you been to Oakland Cemetery yet?

In Atlanta, Oakland Cemetery is the Vegas of cemeteries for hoppers. The biggest, the most historic, the most amazing views of the city. You name it, Oakland has it all. 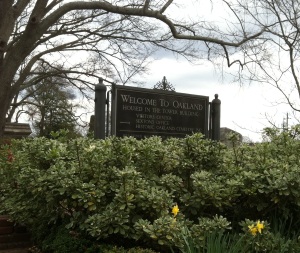 Oakland Cemetery is not just a cemetery for the dead. It welcomes the living to visit and enjoy the beauty of the place.

Until a few weeks ago, I admit that I hadn’t been there, although it wasn’t a lack of desire. I wanted to wait until spring when the place had shaken off its winter gloom and the flowers had started to blossom. And there are just some cemeteries you want to visit without having to wear long johns.

Sarah joined me that day and with my list of Find A Grave photo requests in hand, we headed out. That is one of the great qualities of Oakland. They are not only willing to help you find the location of a grave, they get as excited about it as you do! I know of no other cemetery like this and it is a real treat. Part of it is because their goal is to preserve history and share it with others. They don’t sell plots any longer and they only have a few burials there a week.

Here are some facts about Oakland Cemetery:

– It began as six-acre City Cemetery in 1850 but was renamed Oakland Cemetery in 1872.
– By 1867, it had expanded to its current size of 48 acres due to the need for burial space after the Civil War.
– More than 70,000 people are buried there, many of them Confederate soldiers.
– African-Americans were buried apart from whites and Jewish sections were separate from Christian.
– Twenty-seven Atlanta mayors and six Georgia governors are buried at Oakland.
– Two of the most visited graves are Margaret Mitchell (author of Gone With the Wind) and golf legend Bobby Jones.
– The last burial sites were sold in 1884, but occasionally one will come up for private sale/auction.

The first thing you notice about Oakland is the sheer size of the place. It is HUGE. Getting a map at the Visitor’s Center is a must. Taking a tour is also a good idea or you’ll miss some of the hidden gems the place possesses. 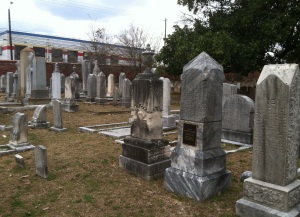 Part of the Jewish section of Oakland. Our guide told us that years ago, a synagogue would purchase a large plot and then sell small sections of it to members of their congregation so that they might be buried close to one another. 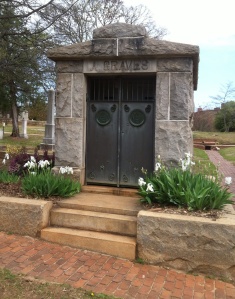 The Graves family has the only mausoleum in Oakland’s African-American section. Antoine Graves, principal of Gate City School, moved in the elite circles of Atlanta’s black community.

There’s also a large area strictly for Confederate Civil War dead. Some of the graves have names but many do not. This is the final resting place for about 6,900 Confederate soldiers, including 3,000 unknowns. Many soldiers had been brought straight from the battlefield to Atlanta hospitals. Those that died from their wounds were buried at Oakland. 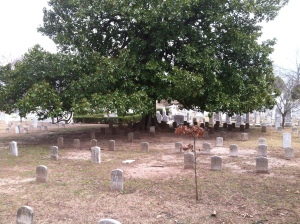 This is just one of several sections of Confederate graves.

This grave was a photo request for Find a Grave. The roots of the tree have grown around the headstone.

You might think locating a Confederate grave would be difficult but they are actually easier to find than those of the civilians. The folks at Oakland can tell you, first, if the soldier has a marker. Some soldiers were buried without them. If the soldier you seek does indeed have a marked grave, they can tell you the exact section, row number and grave number.

In case you were curious, not everyone buried at Oakland had the money to purchase a plot. Almost six acres were set aside, mostly for the indigent. About 7,500 people are buried there. As the Oakland Web site says:

This is Potter’s Field, where no differences of religion and race ever mattered. A single monument commemorates them all. Potter’s Field is a favorite spot for Frisbee and other games—faithful to the Victorian intention that cemeteries should be enjoyed by the living.

That’s another thing about Oakland that separates it from many cemeteries. The public is not only allowed but encouraged to enter the gates and enjoy the space. In addition to Potter’s Field, there are two public areas set aside for this purpose. When Sarah and I were there, a number of people were having picnics there. We also saw a few joggers, some people were on bikes and a photography class was taking place. We even caught sight of a few couples smooching on benches.

There’s one grave located at the corner of one of the public spaces that was completely unplanned. This brings up what I consider one of the most surprising stories about Oakland: the death and burial of former Atlanta Mayor Maynard Jackson. 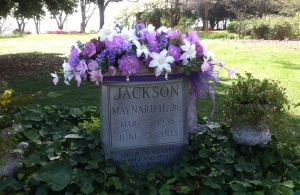 Maynard Jackson was the first African-American mayor of the city of Atlanta. He served three terms (1974-82 and 1990-94). He was also a prominent face during the Atlanta Child Murders (1979-1981). There are few people my age who do not remember seeing him on the news at that time.

The former mayor seemed to be going strong in 2003 when he was on a business trip out of town. Unfortunately, he had a heart attack at Ronald Reagan Washington National Airport. While in an ambulance transporting him to a nearby hospital, Jackson suffered a second heart attack, this one fatal.

According to our guide at Oakland, Jackson (like many people) had no funeral or burial plans whatsoever. No plot had been purchased, nothing. So the city fathers had to scramble to figure out what they were going to do about it. With Oakland’s approval, they were able to have him buried there, his grave literally facing toward downtown Atlanta. It just goes to show that even someone as famous as Maynard Jackson can put off planning his funeral/burial.

Another interesting story is about the only grave marker for a pet bird at Oakland. Tweet the mockingbird was a beloved companion to Molly Weimer. When Tweet died in 1875, Molly asked if he could be buried by her plot. Oakland does not normally allow pet burials but Molly got permission. She attempted to hire a stonecutter to carve a mockingbird to grace Tweet’s grave. He was not up to the task, however, so the statue of a lamb was used. They are often placed on the graves of children.

Tweet’s is one of two marked graves of a pet in Oakland, but there are stories about people who had their pets secretly buried in their plot beside them.

Next week, I’ll talk about some of Oakland’s more eye-catching graves and the symbolism they represent.

9 thoughts on “Welcome to Oakland Cemetery, Part One”