Last week, I talked about the history of Oakland Cemetery and its different sections. This week, I’ll share the stories behind some of the graves and highlight some of my favorites.

Neoclassic is the prominent style seen at Oakland. Many of the monuments reflect the Victorian era in which they were created. Certain symbols are featured that have special signifigance.

Until I visited Oakland, I had never seen stone “pillows” like these. They were meant to represent the eternal rest the deceased had entered.

These “pillow” grave markers are quite common at Oakland.

The images of a tree trunk or a pile of cut logs are ones I’ve seen before. Some say this represents a life cut short.

This grave is for a little girl, Elizabeth Grisham Brown, who died barely past her first birthday.

The graves of Mollie Cash Neal and her daughter, Lizzie, are a much photographed stop for many (including me) who visit Oakland. Thomas Benton Neal, a Confederate Civil War veteran, had the monument made in memory of his wife and daughter. Lizzie died quite young, only 23, and her mother died only a few years later. This beautifully carved monument contains symbols commonly seen in that time. 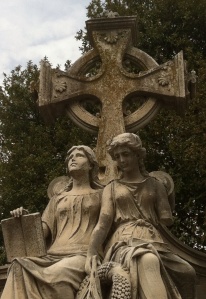 Mollie, seated on the left, has a book (possibly the Bible) open on her lap. Some say this reflects her spiritual maturity in contrast with that of her youthful daughter, who has a closed book on her lap. Mollie is looking up, possibly with her eyes on Heaven.

In contrast, Lizzie, on the right, is looking down. She is holding both a wreath and a palm branch. The wreath is thought to represent eternity while the palm branch stands for spiritual victory over death. Behind the pair stands a Celtic cross. Since the Neal family had Irish roots, this makes perfect sense.

Some monuments are just stunning to look at. The one for Mary Glover Thurman is one of them. She came to Atlanta with her husband, Dr. Fendall Thruman, as a new bride in 1855 when he set up a dental practice. Together, they cultivated an amazing flower garden known throughout the city. Their lavish home was located where the Biltmore Hotel now stands.

The statue is very similar to one originally done by Daniel Chester French that is in Woodlawn Cemetery in New York.

After Dr. Thurman died, Mary started giving her beautiful flowers to neighbors and sick friends. She frequently took flowers to the sick in the local hospitals, earning herself the name of “The Angel of Atlanta”.

The statue is said to be based on a design of a very similar sculpture by Daniel Chester French, who is best known for the seated Abraham Lincoln centered in the Lincoln Memorial in Washington, D.C. French’s sculpture is part of the Angie Kinsey monument in Woodlawn Cemetery, which is located in the Bronx in New York City.

Other monuments are more humorous than solemn. Jasper Newton Smith’s mausoleum would fit that category. A statue of him reclining in a chair sits on top of it, a rather dour expression on his face. Local lore claims that Smith had a great aversion to neckties due to getting his neck caught in a vine and nearly choking to death as a child. When he commissioned sculptor Oliver W. Edwards to carve his statue, he forgot to tell him to leave off the necktie (which was a wardrobe must in those days). Upon seeing the completed sculpture, Smith supposedly refused to pay until Edwards had chipped off the offensive necktie.

Jasper Smith abhorred neckties so he insisted his statue not have one.

The real story, told by Edwards’ daughter many years later in a letter to the Atlanta Constitution in 1982, is that her father created a plaster model of Smith to go by that did have a necktie as part of it. When Smith saw it, he smashed it with his cane and proceeded to sit down so Edwards could measure his features to create the final work, which was sans necktie. She claims Smith was pleased with the final result.

Some graves are just eye-catching in their style. The colonial brick tomb of Mary Helena Lynes Donehoo is one of them. I’ve never seen anything quite like it.

Mary Donehoo’s tomb is definitely one that gets your attention.

The last notable gravesite I want to feature is the W.A. Rawson mausoleum. Atlanta mayor Charles Collier is interred inside. So are award-winning writers Julia Collier Harris and her husband, Julian LaRose Harris. Julian was the son of Joel Chandler Harris, famous author of the Uncle Remus tales. This couple published the Columbus (Georgia) Enquirer Sun and won the 1926 Pulitzer prize for their editorials and articles about the Scopes Monkey Trial and the Ku Klux Klan.

The notable people interred inside would make this mausoleum notable on its own. But the stained glass circle containing a dove with an olive branch in its beak makes it a must see.

The dove symbolizes peace and the spirit, like a bird in flight, rising to Heaven.

There are simply too many graves and too many fascinating stories for me to share in a few blog posts. That’s why I can now say, as so many others do, that you have to see and experience Oakland Cemetery for yourself.

Afterward, you can cross the street to enjoy a cold beverage at the aptly named pub, Six Feet Under. If you took the guided tour of Oakland, show them your receipt and they’ll take 20 percent off your bill.

Not a bad way to wrap up a day of hopping, is it?