I get some bemused looks when I tell people about my cemetery hopping habit. Some people have commented that it must be so depressing going to cemeteries or that death itself is too sad to linger on.

I’ll be brutally honest. Losing a loved one is HARD. I don’t make light of that or disrespect the gravity of death. I lost my father almost 10 years ago and you never really “get over it”. Even though I knew he had accepted Jesus Christ as his personal Savior years before, even though I knew he was exactly where he wanted to be, I still had trouble moving forward. I didn’t want him to be in Heaven because I wanted him here with me.

Thankfully, the healing process helped ease that emotional struggle. It took God’s patient love and an amazing program called Griefshare to get me back on track. Part of that included laughing at some of Dad’s quirks and remembering his more irreverent moments.

One of his favorite shows was the Mary Tyler Moore Show. When I think about grief, I remember a classic episode called “Chuckles Bites the Dust.”

The staff of WJM (the TV station where Mary works) are mourning the loss of Chuckles the Clown, host of a beloved kids’ show. Chuckles met his demise while costumed as character Peter Peanut in a local parade. As Lou Grant explains, a rogue elephant tried to “deshell” Chuckles. When announcing Chuckles’ death on the air, anchorman Ted Baxter deadpans, “He died a broken man.” Mary is mortified at her co-workers’ jokes about Chuckles’ death and tells them to stop being so disrespectful. Even as Chuckles’ funeral starts, she scolds Murray for whispering jokes. 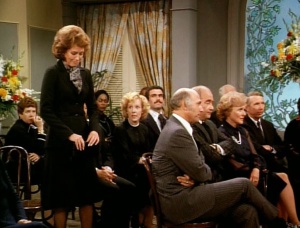 After chastising her co-workers for laughing at Chuckles’ death, Mary can’t stop giggling at his funeral.

Lou Grant sums it up well when he says, “We laugh at death because we know that death will have the last laugh on us.”

While it’s certainly not a good idea to bring a whoopie cushion to a funeral, humor can definitely help us through the grieving process. It can act as a release of the pressure cooker of stress a person is under. That inner turmoil breaks free and finds relief in laughter.

Dad was in his last hours when I, my sister, husband and brother-in-law went to the cemetery to purchase a plot for him. We were all in a bad way, facing a very difficult situation. The kind woman we were working with was explaining everything and casually mentioned that in the years to come we would need to maintain Dad’s grave by personally keeping the grass cut, etc.

This jolted us all out of our fog and we stared at her in stunned silence. Was she for real? She smiled and said, “It’s a joke, you guys, relax!” 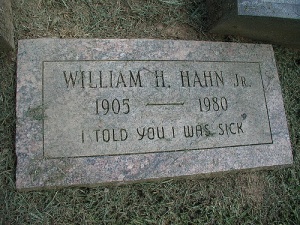 This epitaph was used first by Irish comedian/musician Spike Milligan, who said, “I Told You I Was Ill” should be his epitaph. It shows that even in death, humor can shine through.

Now some people might have taken offense at that. But we all collapsed into laughter. We needed something to help shake us out of our gloom, and humor did the job. I think of that woman from time to time with much appreciation. She knew it was just what we needed to do at that moment.

In 1998, one of my best friends died of a sudden, fatal heart attack. John was only 30 and it was a shock to all of us who knew him. I gave one of the eulogies at his funeral, wanting to share not only how much John had meant to me but how funny he could be. So I shared the story of when, while an engineer at a small Pennsylvania radio station, he impersonated a Polish polka DJ (who didn’t show up for his shift) for an entire hour with nobody being the wiser. Later, I learned his family had not known this bit of John trivia and had gotten a lot of joy from hearing it.

John and I at a Christmas party. People used to call us Mutt and Jeff because of the disparity in our heights. He made me laugh every time we were together.

Death is a serious business. But mourning doesn’t have to be constant pain. There is a place for laughter, for joyful remembrance amid the sadness. Ecclesiastes 3:2-8 is often quoted but I think God inspired every word in its anonymous author.

For everything there is a season, and a time for every matter under heaven:

Humor can heal. And it can bring great relief in the depths of despair.

I’ve mentioned Steel Magnolias before as one of my favorite movies. Dolly Parton, who plays sassy beautician Truvy, says, “Laughter through tears is my favorite emotion.”

4 thoughts on “A Little Song, A Little Dance: Humor Amid Grief”