“People were struggling in the water, clustered so thickly that they literally covered the surface of the river. A few were swimming; the rest were floundering about, some clinging to a little raft…others clutching at anything they could reach – at bits of wood, at each other, grabbing each other, pulling each other down, and screaming! The screaming was the most horrible of all.” — Helen Repa, Western Electric nurse

Everything else fades away, all of our losses and all of our gains. And only the river remains… — Eastland: A New Musical

July 24, 1915 doesn’t mean much outside the city of Chicago. Until I married Chris, it was just another date on the calendar. But I soon learned it was a tragic day in the Rylands family.

On that Saturday, 844 Chicagoans lost their lives when the excursion ship S.S. Eastland rolled onto its side. Chris’ great-grandmother, Minnie Miller Rylands, drowned in the Chicago River. Her husband, James Stephen Rylands, and their little son, John Joseph, survived. So did James’ brother, William. John Joseph Rylands was Chris’ grandfather.

This is a postcard re-issued by the now defunct Cicero Historical Society of the Eastland.

The Eastland, known as the “Speed Queen of the Great Lakes,” was part of a fleet of five excursion boats scheduled to ferry Western Electric employees, families and friends across Lake Michigan to Michigan City, Ind., for a rare day of fun amid the usual six-day work week.

The daughter of German immigrants, Minnie was only 28 at the time of her death. Photo courtesy of Joan Rylands Schroeder.

Minnie’s husband, James, had to make a decision no husband and father should ever make. To save his wife or his son first. Photo courtesy of Joan Rylands Schroeder.

The Eastland, docked at the Clark Street Bridge, never left the Chicago River. Picnickers laughed amid the music and dancing as they boarded. When the crowded ship began listing back and forth from port to starboard, many thought it was a joke. But when the boat listed over so far that the people began sliding across the floor, panic set in.

The Eastland’s captain, Harry Pedersen, sounded the alarm, but only after it was too late. Witnesses say he (and some lucky others) climbed over the starboard railing and walked across the exposed hull to safety, never even getting his feet wet.

Passengers on the main deck rushed to the staircases leading upstairs, which proved to be the worst single death trap for those passengers within the interior decks of the ship.

The Second Regiment Armory, on Washington Boulevard, served as a temporary morgue for victims of the Eastland disaster. Some people were never identified. Photo from the Chicago Tribune Archives.

More than 2,500 passengers and crew members were on board that day – and 844 people lost their lives, including 22 entire families. Why the Eastland rolled over that day is complicated but you can read about it on the Eastland Disaster Historical Society website. After the Eastland was raised in August, she was sold to the Illinois U.S. Navy Reserve and recommissioned as the U.S.S. Wilmette, then converted to a gunboat

This past July, my family spent a week in Chicago as our summer vacation. One reason was to celebrate the wedding of Chris’ cousin, Brett. But the other was to be part of the 100th anniversary events surrounding the sinking of the Eastland. 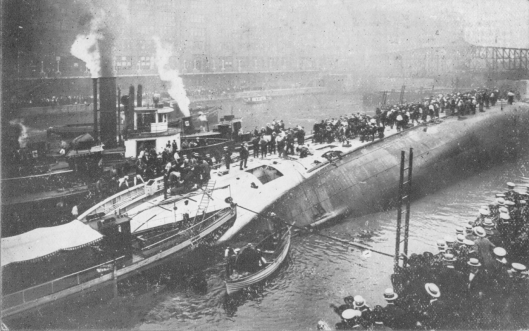 A view of the Eastland after she rolled over from the south side of the Chicago River. The Clark Street Bridge is in the background.

People still puzzle over the fact that today so few know about this maritime disaster, but the biggest reason may be the very status of the passengers.

Unlike many of the Titanic victims who were wealthy and notable, just about all of the Eastland passengers were working-class immigrants with little money to their names. Most were of Czech background and worked at the Hawthorne Works factory of Western Electric in the Berwyn/Cicero area of Chicago.

Minnie was of German background and her husband James was British born. Neither worked for Western Electric but a number of people attending that day were not either, having been invited by friends.

According to family lore, James had to decide whom to save first. His wife or his child. Because John Joseph was so young, James pulled him to the water’s edge first. When he went to save Minnie, it was too late. 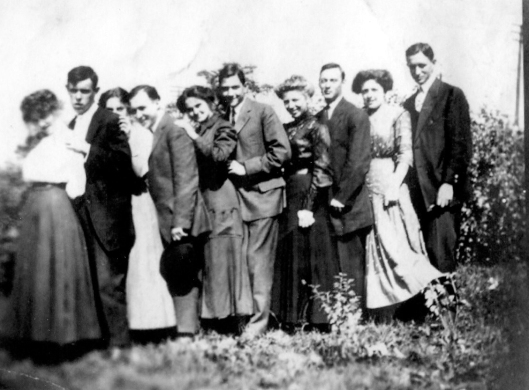 Employees of the Hawthorne Works of Western Electric were ordinary people without much money so when they had a chance to have some fun, they were eager to take it. Photo courtesy of the Eastland Disaster Historical Society website.

In 2012, Eastland: A New Musical premiered in Chicago. One of the main characters is a responder. Reggie Bowles, a young man who sped to the scene on his motorcycle, jumped in the river hoping to save lives. But all he found were dead bodies. Because of his ability to hold his breath for long periods of time, Reggie earned the nickname the Human Frog. It’s reported that he brought over 40 bodies to the surface that day. 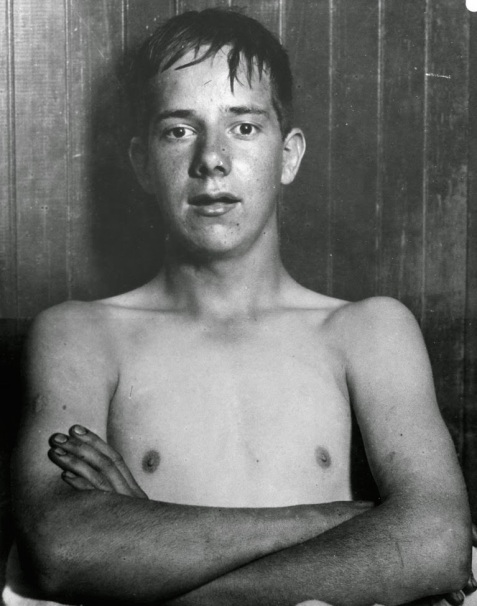 Reggie Bowles, who became known as the Human Frog for his diving ability, brought over 40 bodies to the surface. He later contracted typhoid as a result of his time in the contaminated water.

I had the pleasure of meeting the grandson of Reggie Bowles, David Bowles, at the Saturday luncheon. Many firemen, policemen and ordinary people like Reggie risked their own lives to pull passengers to safety or to recover victims so that their families could later identify them.

David Bowles is the grandson of Reggie Bowles, a young man who rode his motorcycle at top speed to the Eastland in hopes of saving passengers. He took on the grim task of salvaging bodies instead.

A majority of Eastland victims are buried at Bohemian Cemetery (which I will write about next week). But I knew Minnie’s grave was at Forest Home Cemetery. I contacted Chris’ Aunt Joan, who is the genealogist in the family. Nobody had visited her grave before because it’s unmarked and Forest Home is huge.

Fortunately, she located a map the cemetery had sent her a few years ago showing exactly where Minnie, James and their granddaughter Paula (who died in infancy) are buried. 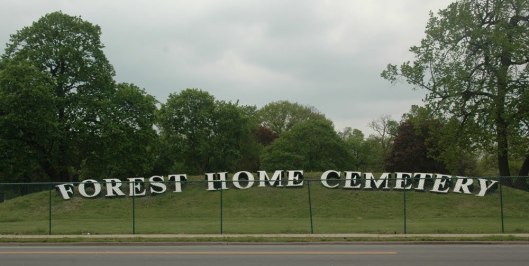 Located off Des Plaines Avenue in the Berwyn/Cicero area, Forest Home Cemetery is actually the merging of two cemeteries (in 1969), Forest Home and Waldheim. Waldheim Cemetery opened in 1873 when the land was sold to a group of German Masonic lodges. Forest Home opened a few years later on land south of Waldheim.

Unlike other cemeteries of the time, Waldheim and Forest Home were open to all, regardless of ethnicity or religion. As a result, it became very popular with immigrants.

Commuters on Chicago’s I-290 (the Eisenhower Expressway) can get a view of Forest Home Cemetery. Photo from the website www.diversostudio.wordpress.com.

Along with Chris’ parents and his Aunt Beth, we (Chris, Sean and I) set out to find Minnie. With only 20 minutes until the gates closed, we drove through the winding roads to the back of the cemetery and found where Minnie, James and Paula were buried.

The empty space to the left of the Faber marker and in front of the Anderson marker is where Minnie, James and Paula are buried. Photo by Chris Rylands.

So why are there no markers for Minnie, James and Paula? I don’t have a good answer for that. Although James was a plumber, he was by no means wealthy. He remarried twice after Minnie died. According to my father-in-law, Craig, his father (John Joseph) never spoke about the Eastland. The few memories shared about that day came through Craig’s mother, Florence.

After visiting the grave sites, we talked about how we can remedy this situation soon. Minnie’s memory deserves that much.

Minnie’s grandson (and my father-in-law) Craig Rylands stands beside the memorial marker commemorating the 1915 Eastland disaster.

On Saturday evening, the families of the survivors/victims/responders gathered at the edge of the Chicago River by the Clark Street Bridge. At precisely 8:44 p.m., we all turned on little battery-powered votives in memory of the 844 lives that were lost that day. Amid the bustle of the city, we observed a moment of silence.

Rest in peace, Minnie. You are not forgotten.

3 thoughts on “Only the River Remains: Remembering the S.S. Eastland”