Come to me, all who labor and are heavy laden, and I will give you rest.

They say death is the great equalizer. But in the cemetery, that hasn’t been the case in centuries past.

More often than not, the people you lived among and worked with were buried around you. This included your religious and ethnic background. The rich were buried with the rich and the poor…? Well, their final home was often a nameless patch of earth.

As I visited a number of cemeteries in Chicago recently, I saw this play out frequently. The grand mausoleums of Graceland and Rose Hill Cemeteries bore the names of wealthy financiers and blue bloods with family wealth. Some of the grandest monuments I’ve ever seen are there.

But it was at Bohemian National Cemetery (BNC) in Chicago’s North Park neighborhood that I saw some of the most fascinating and beautiful gravestones I’ve ever seen. And most of the people buried there were not wealthy at all.

Although it started with 50 acres, Chicago’s Bohemian National Cemetery now covers about 124 acres. Every nationality and religion is welcome.

BNC was created as a result of a desire to break down the barriers of class and religion. In 1877, a Catholic priest denied burial in the Bohemian-Polish Catholic cemetery to those he disliked. The refusal to allow the burial of Marie Silhanek was the last straw.

Frank Zdrubek was one of the founders of Bohemian National Cemetery and is buried there. Photo by Michelle Peace.

Frantisek “Frank” Zdrubek was editor of the Bohemian daily Svornost and gave lectures under the auspices of the Bohemian Freethinker’s Society. At a mass meeting of the more than 20 Czech benevolent, fraternal, workingman’s, gymnastic, and freethinkers societies on January 7th, 1877, Zdrubek asked all of Chicago societies to come together and create a “free national cemetery, where any Czech could be buried without regard to religion.”

The organization raised funds and obtained a suitable location for the cemetery, which was in the township of Jefferson. The first burial was the child of Charles Brada on July 1, 1877. BNC officially opened on September 2, 1877. Although they started with 50 acres, it expanded over the years and now covers about 124 acres.

One reason I wanted to visit BNC was to see the brand new memorial to the victims of the 1915 Eastland Disaster. Chris’ great-grandmother Minnie, whom I wrote about last week, is not buried there but some of his other relatives are. At 143 people, BNC is the resting place of the largest number of Eastland victims. The cemetery’s newly opened Section 16 was almost sold out after that tragic event.

At the time, it took two men about four hours to dig one grave. Because so many graves had to be dug for Eastland victims, an additional 50 men were hired to work 12-hour days to get the job done.

Out of the 844 victims of the 1915 Eastland Disaster, the largest number of them are buried at Bohemian National Cemetery. This memorial was just unveiled in July 2015.

A number of families and local organizations have purchased memorial bricks at the foot of the new Eastland monument at BNC.

These are just a few of the memorial bricks placed at the foot of the Eastland Memorial at BNC.

Wandering through Section 16, I could see that the date of July 24, 1915 is inscribed on many of the markers. They run the gamut from individuals to entire families who died that fateful day.

One of the saddest stories is of Emilie Samek and her fiance, William Sherry. According to the Friends of BNC, Emilie’s father was too ill to work so Emilie got a job at Western Electric as a switchboard operator. With her salary, she was able to help support her parents and four siblings.

Emilie Samek and William Sherry never had the chance to begin married life together. She was only 18 when she died.

Theresa Danda also worked for Western Electric and was engaged to George Dobek, a casemaker. On the fateful day, they took Theresa’s little brother, Edward, with them to join the other employees boarding the boat. Theresa’s sister, Frances, was the only one of the group to survive.

Edward and Theresa Danda were a brother and sister hoping to enjoy a day of fun with their sister, Frances, and Theresa’s fiance. It ended in tragedy.

There are many other stunning monuments at BNC that kept me wandering from section to section. Unlike many cemeteries, many of the markers at BNC have lovely porcelain discs with photos of the deceased on them. It’s amazing that they’ve remained in such good shape. Just seeing the faces gives you a better idea of what the person who lies beneath the stone was like.

BNC also boasts an impressive collection of monuments of World War I soldiers and sailors. I’ve seen these online but they are very difficult to find in the South. At BNC, these tributes to young men who died in the flower of youth are common. 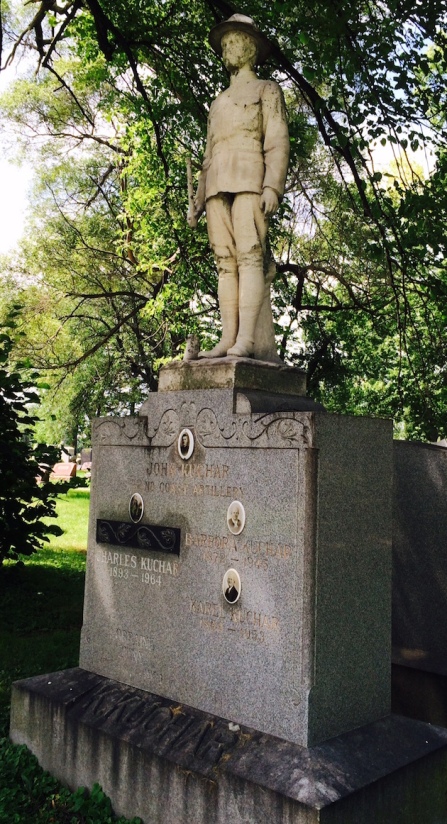 Brothers John and Charles Kuchar both served in the U.S. military. I could not trace the date of John’s death but he served in the 72nd Coast Artillery.

The Kuchar brothers served in the U.S. military but Charles survived World War I. I believe younger brother John did not but I cannot trace his military records beyond his service in the 72nd Coast Artillery.

Charles Kuchar survived his military service. He married and had two children.

Another monument features young sailor Edward Bartizal. He died of influenza at the Great Lakes Naval Hospital in 1918. While he was not killed in action, I am sure his death was no less painful to his parents. 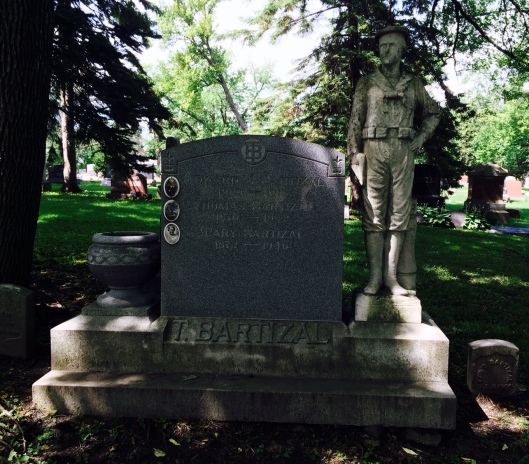 The Bartizal family monument features a statue of son Edward in his Naval uniform. 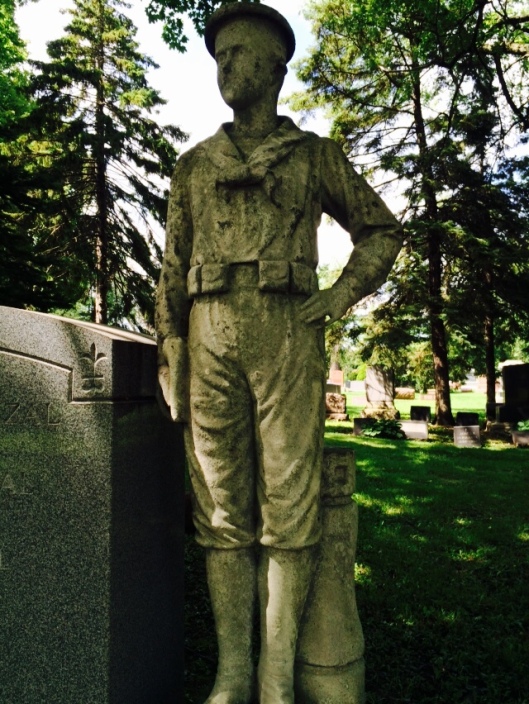 Edward’s life was cut short just as he was entering adulthood.

Pvt. Michael Kokoska was 27 when he died. He was a soldier in the the 127th Infantry, Company L. He was killed in action in France. His is one of the few detailed stories I was able to find in my research.

Michael Kokoska was a Chicago-born son of two Bohemian immigrants. He worked as a tailor and a truck driver before being drafted into the U.S. Army.

Michael was the son of two Bohemian immigrants, Joseph and Majdalena. After finishing school, he found work as a tailor and later as a truck driver. According to his Find a Grave memorial, he was temporarily buried in Morvillars Military Cemetery in France after his death and word was sent to his parents. The task of getting Michael’s remains sent home to America took time but he was eventually buried at BNC in 1921. 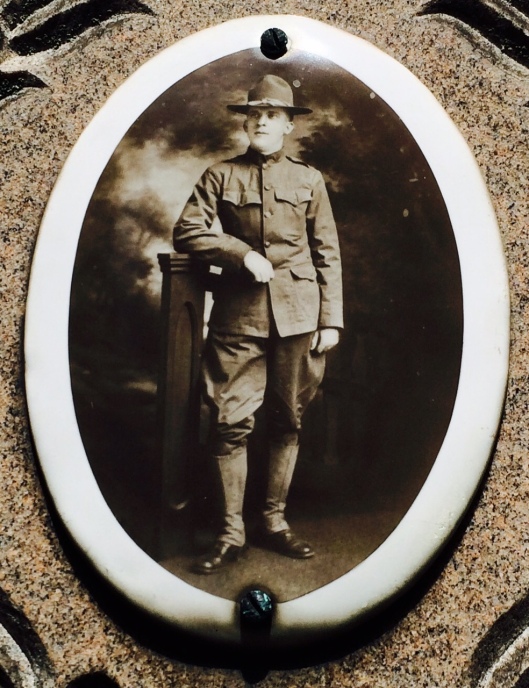 Michael Kokoska’s father wrote several impassioned letters in hopes of getting his son’s remains sent back to the U.S.

On a lighter note, there’s one section of BNC that is bound to put a smile on a few faces. In 2009, Cubs fan were given a unique opportunity to combine their passion for a beloved baseball team with a fitting final resting place.

Cubs Fans Forever: Beyond the Vines was created as a special place just for Chicago Cubs fans to place their cremated remains. About 288 “skyboxes” are available for urns in a unique interment wall. Loved ones can sit in four seats from Wrigley Field that face the wall or even play catch on a small lawn grown from Wrigley sod. 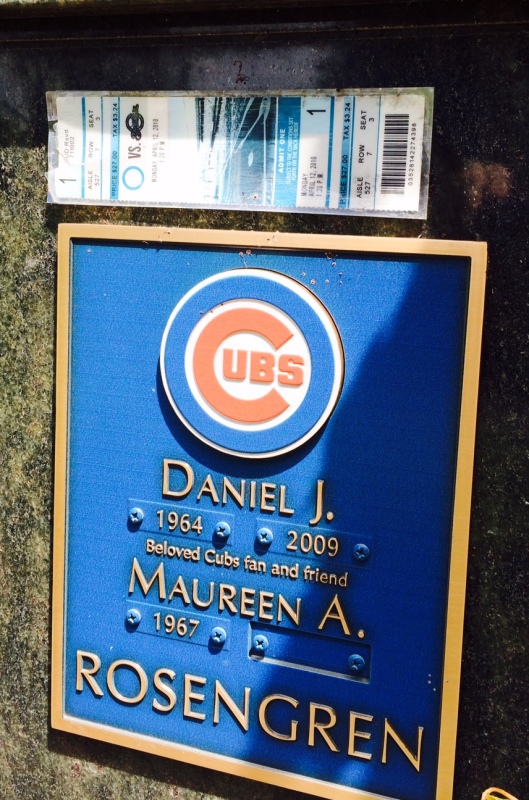 One example of the many “skyboxes” in the “Cubs Fans Forever” interment wall at Bohemian National Cemetery.

I could have stayed at Bohemian National Cemetery for the rest of the day and spent another several exploring the place. As is often the case when cemetery hopping, we just didn’t have enough time. BNC has a distinctly rich character that’s reflective of the people buried there. You want to linger over every grave.

Because whether rich or poor, we all need a place to rest.

2 thoughts on “A Place of Rest for All: Exploring Bohemian National Cemetery”