When we were planing our visit to Chicago, I was hopeful I would visit at least three cemeteries: Rosehill, Graceland and Bohemian National. On the Sunday after we attended Chris’ cousin’s wedding, we headed north of the city and I got to see all of them! Not knowing my way around at all, I was glad Chris was driving.

We only had a few hours to cover a vast amount of territory, so for those who know the place well, I know I missed some of the more famous and eye-catching graves. Believe me, I wish I’d been able to see all of them.

At 325 acres, Rosehill Cemetery is one of oldest and largest in Chicago, chartered in 1859. The name “Rosehill” was actually a mistake. Because of a city clerk’s error, the area previously called “Roe’s Hill” (named for nearby farmer Hiram Roe) become “Rosehill” instead. Roe is said to have refused to sell his land to the city until it was promised that the cemetery be named in his honor.

Rosehill’s impressive front gate was designed by famed architect William Boyington. The limestone used to build it was mined from the quarry at Joliet Prison.

Rosehill is the final resting place of several Chicago mayors (including Long John Wentworth), Civil War generals and soldiers, and Charles Gates Dawes, a U.S. Vice President. Icons such as Oscar Mayer, Montgomery Ward and Richard Sears are buried there, too.

Rosehill is located in the Lincoln Park neighborhood and an elevated Metra train line bridge runs right in front of the Ravenswood Avenue entrance. This impressive gate was designed by William Boyington, who also designed Chicago’s famous Water Tower and many other Chicago buildings. The sign on the gate says it follows the castellated Gothic architecture style.

I did notice that the folks at Rosehill want to make sure you don’t stay past closing time and end up locked in. I saw more than one sign making that clear.

The first warning sign is at the front gate.

If the sign at the gate didn’t scare you enough, here’s another.

A few days after our visit to Rosehill, I read about a guy dubbed “Creepy Clown” that was filmed a month before hopping the 7-foot gate and hanging out just inside the cemetery after sunset. So maybe they’re just trying to give people fair warning.

Once inside (and properly warned), we headed over to some beautiful crypts that surrounded a pond. Chris took some great pictures of the stained glass inside some of them, much better than my iPhone’s capabilities.

I think the colors in this one are spectacular. Photo by Chris Rylands 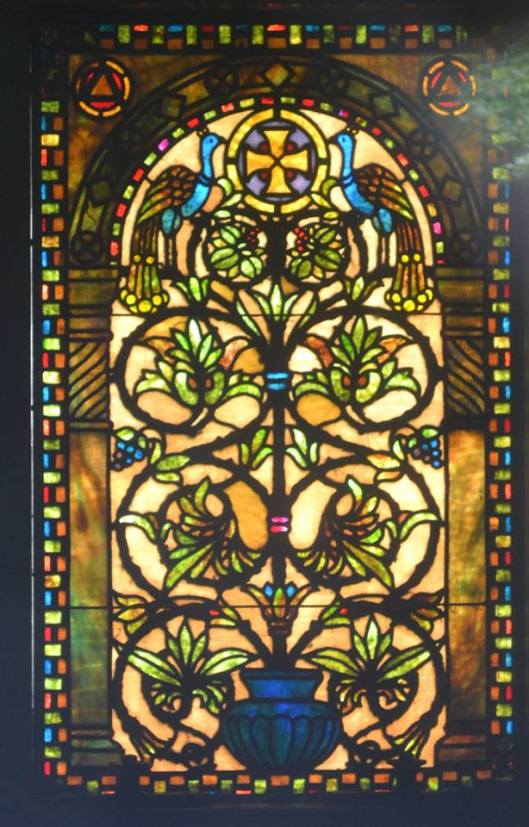 The peacock is a symbol of immortality in that the ancients believed the peacock had flesh that did not decay after death. As such, early Christian paintings and mosaics use peacock imagery. Origen and Augustine both refer to peacocks as a symbol of the resurrection.Photo by Chris Rylands. 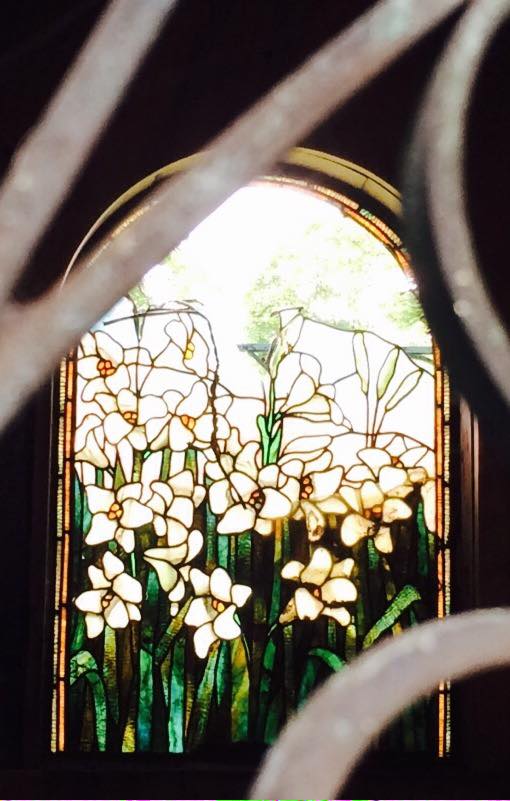 Sadly, the top portion of the stained glass in this one has broken. I still thought it was beautiful. (I took the picture of this one).

Not far from this area is the Horatio N. May Chapel, designed in 1899 by architect Joseph L. Silsbee. He’s noted for having mentored Frank Lloyd Wright and a number of other Prairie School-style architects. The building and the story behind it fascinated me for a number of reasons.

Built in 1899 by Joseph Silsbee, the May Chapel is a tribute to Anna May’s love for her husband, Horatio May. He and Anna are buried beside the chapel.

Who was Horatio N. May and how did he get a chapel built for him? Good question! Thanks to Jim Craig and his delightful blog, Under Every Stone, I was able to find that out so I can share the story. 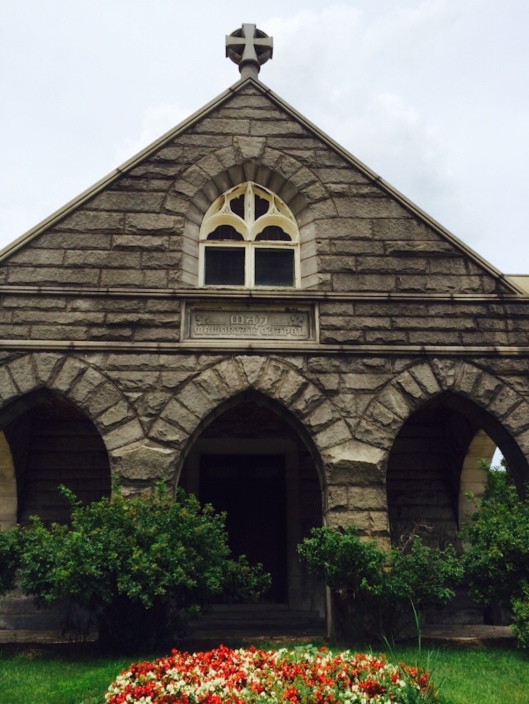 Front of the Horatio May Chapel.

Born in Canada, Horatio May came to Illinois and eventually became a grocer. But his star didn’t rise until he married Anna Lush Wilson in 1882, daughter of pioneer and newspaper editor John Lush Wilson. When May was appointed a Lincoln Park commissioner in 1886, Anna was very pleased. Even more so in 1891 when he was named Controller of Chicago by new mayor Hempstead Washburne (buried at nearby Graceland Cemetery).

May’s role as Controller only lasted as long as Mayor Washburne’s two-year term of office, but he made a positive impact on the Lincoln Park community and the City of Chicago.

Horatio went to the spa town of Bad Nauheim, Germany in July 1898 in hopes of shaking off the lingering effects of the flu. (known as “la grippe” in those days). Despite initial signs of improvement, he died in October and Anna arranged to have his body sent home to Chicago. Abraham Lincoln’s son, Robert Todd Lincoln, was named an honorary pallbearer. 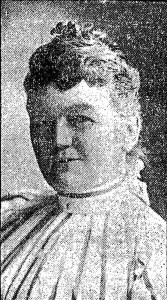 The daughter of a newspaper editor, Anns Wilson May wanted her late husband, Horatio May, to have a special chapel built to honor his memory.

The Mays were admirers of Joseph Silsbee and had hired him to design their Chicago home on N. Astor Street. So when Anna considered how to honor her husband’s life at Rosehill, she went beyond providing a grave stone. She wanted a chapel built in his name and she asked Silsbee to design it. 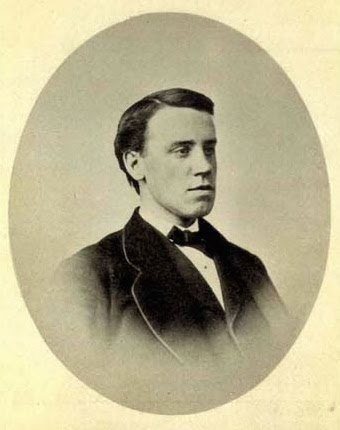 Joseph Silsbee’s most prominent works were in Syracuse and Buffalo, N.Y., and Chicago. He was influential as mentor to a generation of architects, most notably architects of the Prairie School including Frank Lloyd Wright.

You can’t go inside the May Chapel unless you request special permission and we didn’t have time to ask. From what I learned later, you can request to use it for a funeral service. And some weddings have been performed there. We did spend ample time looking around outside as there was plenty to take in.

The ornate mosaic ceiling of the May Chapel entryway is stunning. My photo does not do it justice.

Here’s a view of the side of the May Chapel beside the entrance of the receiving vault.

Chris took this picture of the other side of the May Chapel. You can see barbed wire on the back wall.

Probably the most peculiar but fascinating area is the back of the May Chapel where the underground receiving vault is located until the hill. You can climb up it and peer down into it through some very old domed windows. I don’t know what you would call them. 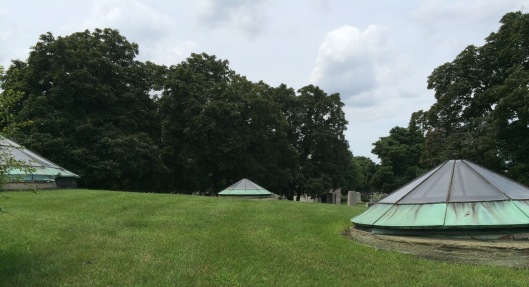 These small domes on top of the receiving tomb at the back of the May Chapel may have been for ventilation purposes. 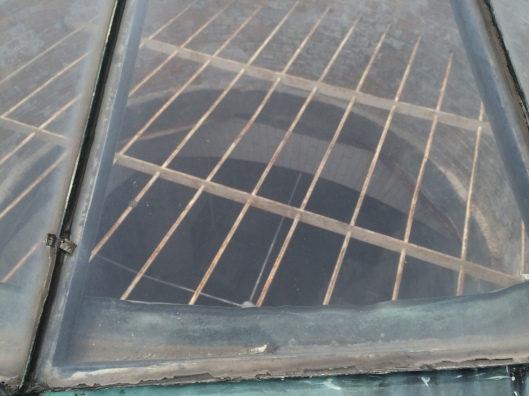 In case you were curious, here’s what you see when you look down into the receiving tomb. Not much to see.

However, I’ve never seen one built into the hill in the back of a chapel like this. The entry is still intact. I don’t know if it still being used. From the look of it, I would say no. At least not for storing bodies/caskets.

The entrance to the May Chapel’s receiving tomb is still intact.

Contrary to some reports, Horatio and Anna are not interred with the chapel. But they are buried to the right side of the entryway, with a small slab to mark the graves.

Silsbee also designed a mausoleum for the family of grain merchant and close friend William Bartlett that is on the grounds of Rosehill. Alas, I didn’t get any pictures of it so I am borrowing one from the excellent blog Searching for Silsbee.

Photo from the blog Searching for Silsbee at http://www.jsilsbee.blogspot.com.

Next week, I’ll share about Rosehill’s grand mausoleum and more stories about some of the people buried at the cemetery. I hope you’ll come back for more.