Last week, I shared the history behind Graceland Cemetery’s origins and spotlighted a few of the more eye-catching monuments. This week, we’ll continue that theme and make a few new discoveries.

After photographing the massive Kimball monument, I noticed that behind it was a rock monument with a man’s profile on it. As is often the case, I took a picture because I thought it looked interesting and would look up the name later because it sounded familiar.

It’s hard to walk by Sullivan’s grave without stopping to take notice of it. Sorry about the shadows!

This emblem is typical of Sullivan’s style of intertwining vines and leaves combined with crisp geometric shapes.

Later, I learned that Louis Henri Sullivan (1856-1924) is considered not only the “father of skyscrapers” but the “father of modernism” in the architectural world.

Born to immigrant parents in Boston, Sullivan entered MIT at 16 by completing not only high school early but skipping past his first two years of college studies by taking a series of exams. He worked with noted architects Frank Furness and William LeBaron Jenney (also buried at Graceland) before going to Paris for a year of study at the Ecole des Beaux Arts.

It was Sullivan’s work from 1883 to 1895 when he partnered with engineer Dankmar Adler (1844-1900) that his career took off. Adler oversaw business and construction aspects of each project while Sullivan’s focus was on design.

Along with a young draftsman named Frank Lloyd Wright, the team completed many architecturally significant buildings such as the Chicago Stock Exchange, the Wainwright building in St. Louis, Mo., the Guaranty Building in Buffalo, N.Y. and New Orleans Union Station (demolished in 1954). Before demolishing the Chicago Stock Exchange in 1972, Sullivan’s grand arch was removed and installed at the Art Institute of Chicago. 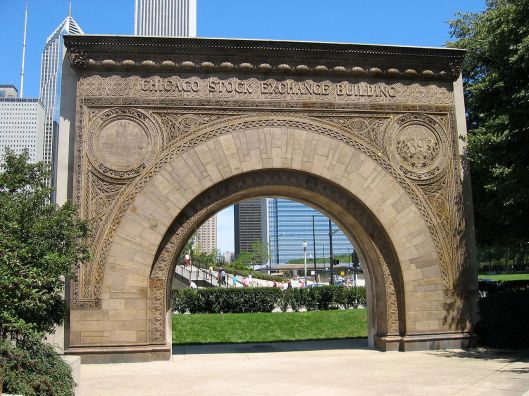 Although the Chicago Stock Exchange building that Sullivan helped design was demolished in 1972, the arch was saved and is now at the Art Institute of Chicago. Photo by Jeremy Atherton.

Sullivan is perhaps best known for the following quote:

It is the pervading law of all things organic, and inorganic, of all things physical and metaphysical, of all things human and all things super-human, of all true manifestations of the head, of the heart, of the soul, that the life is recognizable in its expression, that form ever follows function. This is the law. —1896 essay “The Tall Office Building Artistically Considered.”

Sullivan and Adler also designed two of Graceland’s tombs. I didn’t get to see the celebrated Getty tomb but I did unwittingly take a picture of the Martin Ryerson tomb, having no idea Sullivan designed it. Martin Ryerson (1818–1887) was a wealthy Chicago lumber baron and real estate speculator. His son commissioned the team to create the impressive yet understated Egyptian Revival tomb.

The Ryerson tomb is constructed from large blocks of highly polished Quincy granite and was inspired by Egyptian funerary traditions.

Across the way from the Ryerson tomb is another Egyptian Revival mausoleum but of a much grander style. With its quirky mix of Egyptian and Christian iconography, the Schoenhofen mausoleum definitely makes you stop in your tracks. 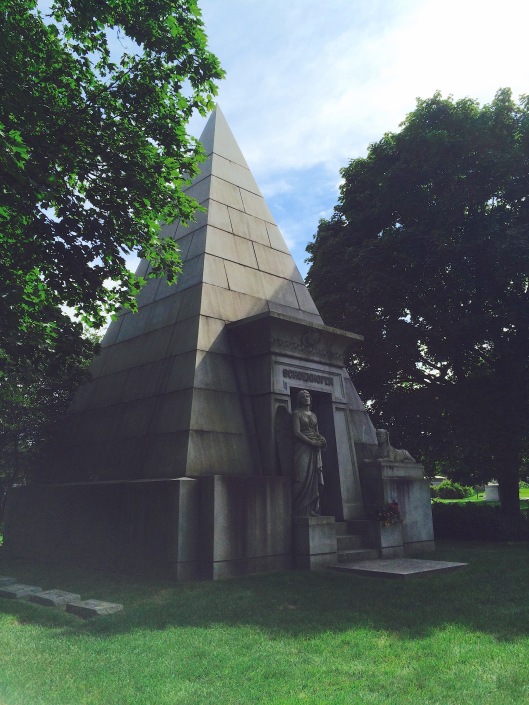 Unlike the Ryerson tomb, the Schoenhofen mausoleum is clearly modeled after the Egyptian Revival style made popular during the Victorian age.

German-born Peter Schoenhofen (1827-1893) came penniless to America in 1851 and took jobs in various breweries around Chicago. Eventually he and a partner, Matheus Gottfried, opened a brewery. Schoenhofen bought out Gottfried in 1867 and the company became the Peter Schoenhofen Brewing Company. Ads bragged that the beer’s clean taste came from the artesian spring located under the brewery. Their Edelweiss brand was the best known.

Peter Schoenhofen started out as a penniless immigrant in Chicago and became a prominent brewer.

The Schoenhofen Brewing Company has quite a storied past (including unfounded rumors they were broadcasting war secrets to the Germans during World War I) that you can learn more about in this excellent podcast.

Some of the Schoenhofen Brewing Company’s buildings in Chicago still survive today and are on the National Historic Register. You can glimpse two of them in the iconic movie The Blues Brothers when the fellows are driving to St. Helen of the Blessed Shroud Orphanage. German architect Richard Schmidt, who designed a number of them, also designed Schoenhofen’s mausoleum.

A male Sphinx guards the door, a distinctly Egyptian motif.

At one time, the angel to the left of the mausoleum’s door held a key. It’s no longer there. As a Christian symbol, an angel seems a little out of place next to a Sphinx.

From this vantage point, it seems like the angel is looking over at the Ryerson tomb. 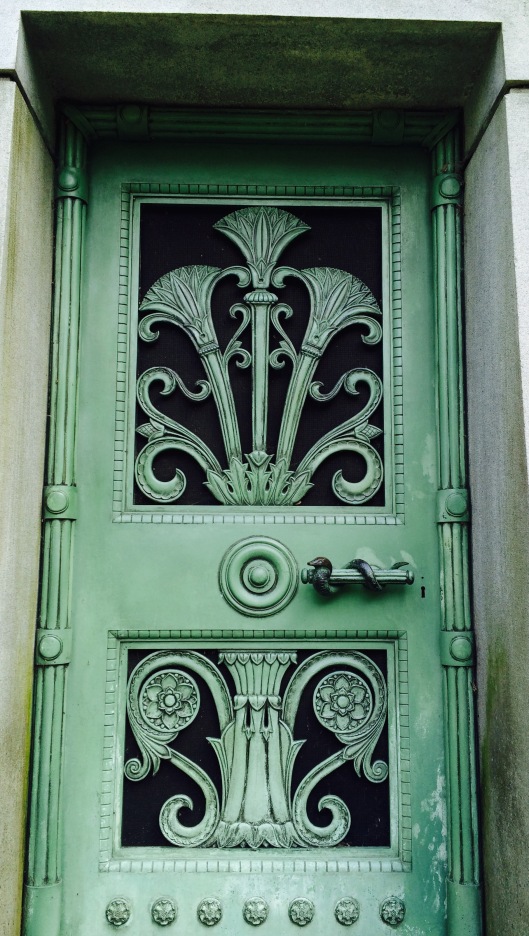 What an ornate door! Can you see what’s on the handle? 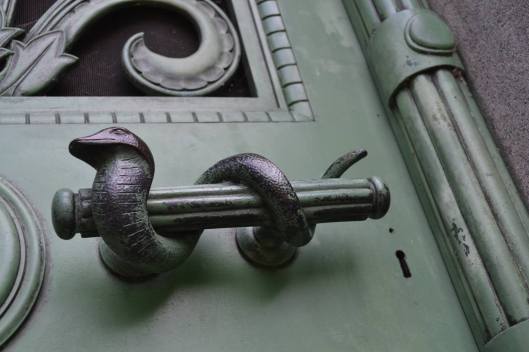 My husband, Chris, got a great shot of this protective cobra.

The monument to George Pullman, inventor of the Pullman sleeping car, features a Corinthian column flanked by curved stone benches. It was designed by Solon Spencer Bemen, architect of the company town of Pullman (where those sleeping cars were manufactured).

Anyone with ideas of getting into George Pullman’s grave should think twice.

The story behind Pullman’s burial is unique. Fearing that some of his former employees or other labor supporters might try to dig up his body, his family arranged for Pullman’s remains to be placed in a lead-lined mahogany coffin. After lowering that coffin into a deep pit whose base and walls were reinforced with 18 inches of concrete, they poured more concrete and a layer of steel rails that were bolted together on top of that. The entire burial process took two days.

There’s one more mausoleum I want to feature that I saw as we were driving toward the front gate to leave. It looked so different from the others I made Chris stop so I could hop out.

This Gothic-style mausoleum for the Huck family is hard to drive by without stopping. Photo by Chris Rylands.

The Huck mausoleum was built in 1915, probably by the wife of Louis Carl Huck, on a plot Huck purchased in 1888. The architect is unknown. Like Schoenhofen, Huck was a German-born brewer who founded his own business, the Louis C. Huck Malting Company. He sold it 22 years later and went into real estate, leaving behind an extensive list of holdings after he died.

Huck’s namesake, Louis C. Huck, Jr., invented the blind rivet which was first used in the B-24 Bomber in 1943. He formed Huck Fasteners in 1940 and developed what became known as the Huck Bolt, an aluminum fastener that is used today in trains, planes and automobiles. He is entombed in the mausoleum with his parents.

All four corners of the Huck mausoleum are guarded by roaring lions. 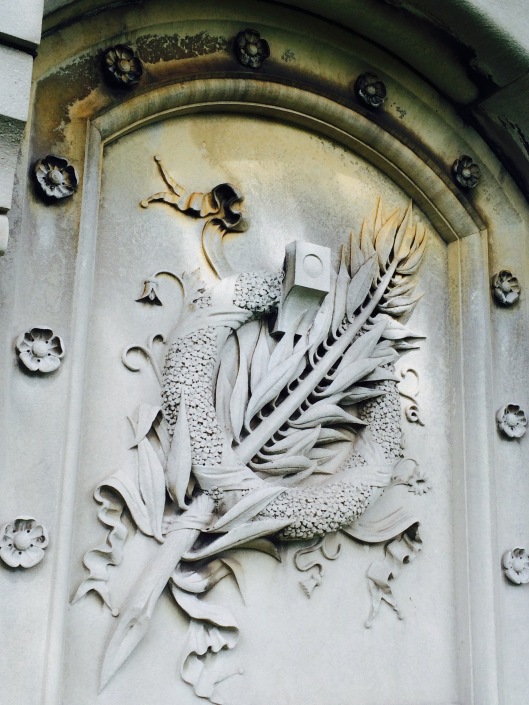 One of the doors features a wreath with a frond through it. Both are often viewed as symbols of victory and immortality.

As we left Graceland Cemetery, I reflected on what a lovely oasis we had enjoyed amid the frenetic busyness that is Chicago. So much history rests there in the monuments, and the beautiful flora and fauna that surrounds them. I hated to leave it.

Later that week, I visited one last Chicago cemetery that is the final resting place of some fellows with less than stellar reputations. If you want to learn more about Chicago’s colorful mobster past and some of its starring players, come along with me next week to Mount Carmel Cemetery.