Today’s post is Part I of the final installment of my Chicago Cemetery Adventure. Having visited Rosehill, Bohemian National and Graceland, I saved Mount Carmel Cemetery for last.

Getting to see Mount Carmel Catholic Cemetery was an unexpected gift. My son was eager to visit a Lego exhibition at the Morton Arboretum in Lisle. Out of habit, I looked to see if there were any cemeteries nearby and my eyes lit up when I saw Mount Carmel was about 20 minutes away. So after dropping off my fellas at the Arboretum, I headed over. 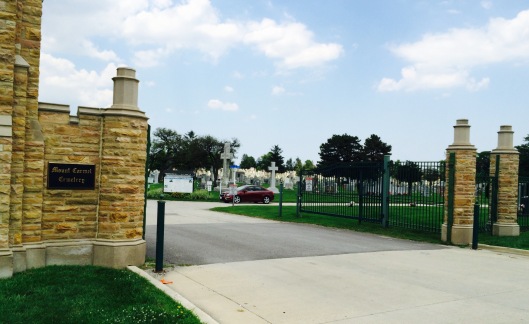 Consecrated in 1901, Mount Carmel Catholic Cemetery was the first cemetery to be opened in the western area of the Archdiocese of Chicago. At about 214 acres, Mount Carmel combined operations with Queen of Heaven Cemetery (which is across the street) in 1965.

There are more than 226,275 graves/family mausoleums at Mount Carmel and about 800 people are interred there annually. In all, the cemetery grounds contain over 400 family mausoleums. Many families are of Italian descent. 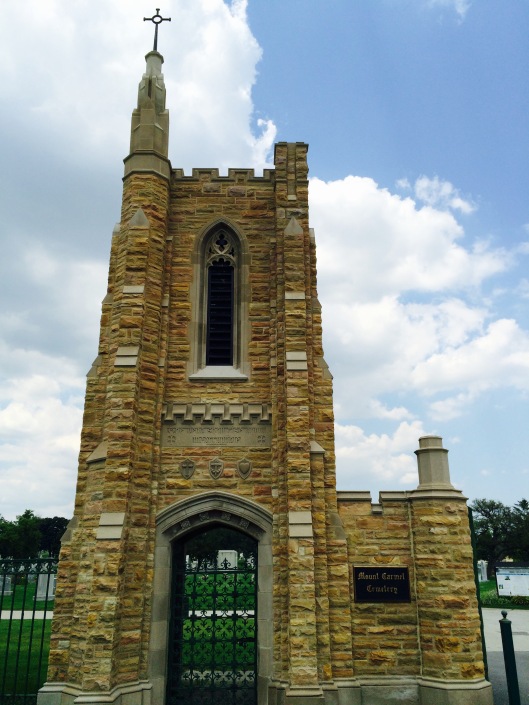 I freely admit that I wanted to see Mount Carmel’s main claim to fame, the grave of notorious gangster Alphonse “Al” aka “Scarface” Capone. Not because I think Prohibition-era mobsters should be glamorized but because of the impact they had on Chicago at that time in history. 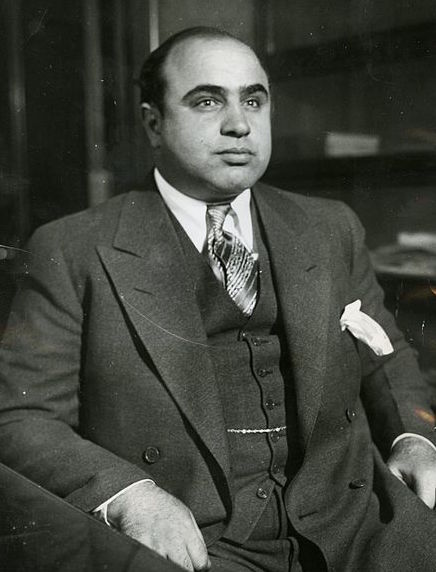 Born to Italian immigrant parents in 1899, Al Capone grew up in New York City but came to the peak of his criminal career in Chicago.

Born Alphonse Gabriel Capone in 1899 to Gabriel and Theresa Capone in Brooklyn, N.Y., Al quit school in eighth grade. Later, he was a Five Points Gang member who became a bouncer in organized crime premises (such as brothels).

In his early 1920s, Capone moved to Chicago. He became bodyguard and trusted friend of Johnny Torrio, head of a criminal syndicate that illegally supplied alcohol. The group, which came to control the Southside of the city, became known as “the Outfit”. 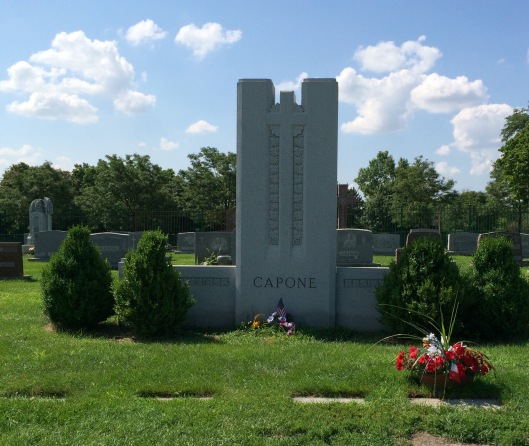 This is the Capone family plot. Al Capone is buried with his parents and five of his siblings. His grave is the one on the far right with the flowers.

Torrio retired after North Side Gang (more on them later) gunmen almost killed him, handing control to Capone. Capone expanded the bootlegging business through increasingly violent means, but his mutually profitable relationships with Chicago Mayor William Hale Thompson and the city’s police meant Capone seemed safe from law enforcement. His notoriety also gave him some measure of public popularity.

But after the infamous Saint Valentine’s Day Massacre in 1929, Capone’s image was tarnished and he came under FBI scrutiny. He was eventually convicted of tax evasion in 1931 and ordered to serve 11 years in prison, some of it spent at the Atlanta Penitentiary. 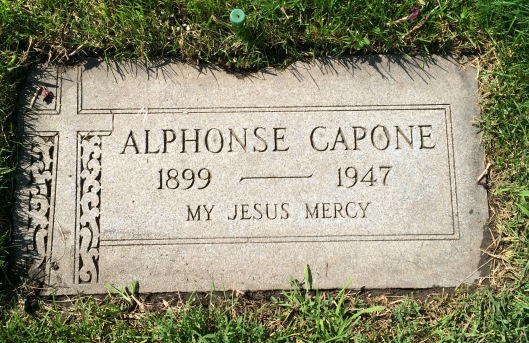 Al Capone didn’t die in a hail of gunfire but of late-stage syphilis. 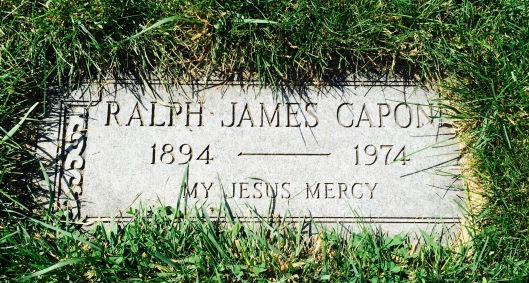 Ralph “Bottles” Capone was Al’s older brother, who got his nickname not from involvement in the Capone bootlegging empire but from running legitimate non-alcoholic beverage and bottling operations in Chicago. While Ralph was also jailed for tax evasion at one point, he was considered a minor player in the underworld.

Capone died in 1947 in Miami but not in a hail of gunfire. He contracted syphilis in his youth and thought he was cured when it went into remission, so he never sought treatment. During his incarceration, the disease ate away at his mental capacities. His final years were spent at his Palm Beach mansion and he died of a stroke brought on by his late-stage syphilis.

After a wake in Miami, Capone’s body was sent to Chicago for burial. He was first buried at Mount Olivet Cemetery but after his mother’s death in 1952, he was moved to Mount Carmel (along with his father and brother Salvatore) in hopes a change in location would stop the vandalism to his gravestone. You can read more about that here.

Deeper into Mount Carmel you can find two of Capone’s bitter enemies, Henry Earl J. Wojciechowski (better known as Hymie Weiss) and Dean O’Banion. As a Polish-American, Weiss was a petty criminal who befriended Irish-American O’Banion. With Weiss and George “Bugs” Moran, O’Banion established the North Side Gang, which eventually controlled rum running, bootlegging and other illicit activities in northern Chicago. 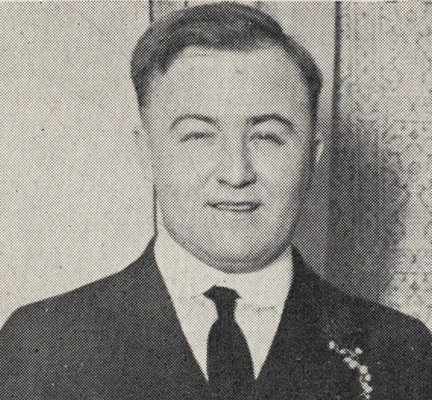 Irish-American Dean O’Banion and Hymie Weiss were a powerful force within the North Side Gang.

Unlike the Outfit run by Torrio and later Capone, the North Side Gang was made up of Irish, German and Polish criminals. Ultimately, clashes between the two groups led to both the death of O’Banion and Weiss. In 1924, after personally insulting his arch rival Angelo Genna, O’Banion was shot and killed inside his own flower shop, Schofield’s, by Southsiders John Scalise and Albert Anselmi. 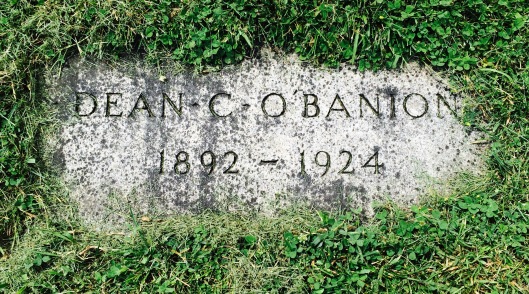 In October 1926, Capone sent his best hitmen to Weiss’ headquarters on State Street, O’Banion’s old flower shop. Two gunmen hiding in a nearby rooming house opened fire with a sub-machine gun and shotgun at Weiss and his three associates as they crossed the street. 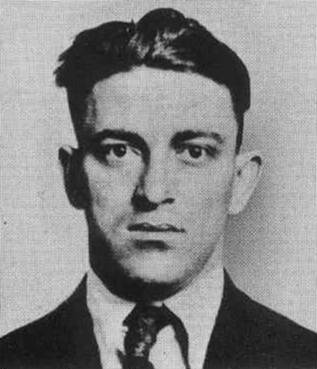 When photographers tried to snap Weiss’ picture, he would glare at them and say in a low voice, “You take a picture of me and I’ll kill you.” 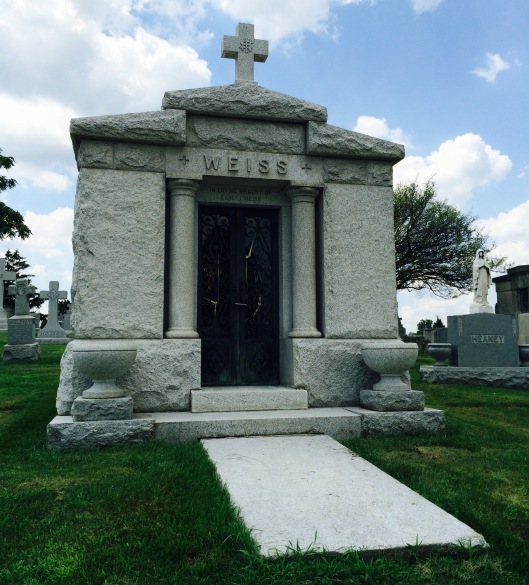 The Weiss mausoleum is located near Dean O’Banion’s monument. It is said that Weiss was the only man Al Capone feared.

This is the best picture I could get of the inside of the Weiss mausoleum.

On the other side of Mount Carmel you can find the mausoleum of the Giancana family. It’s the final resting place of Salvatore “Mooney Sam” Giancana. Among his other nicknames were, “Momo”, “Sam the Cigar,” and “Sammy.” He was the son of Sicilian immigrants.

Sam Giancana joined the Forty-Two Gang, a juvenile street crew headed by boss Joseph Esposito. Giancana soon developed a reputation for being an excellent getaway driver (he was wheel man for Capone at one time), a high earner and a violent killer.

After Esposito’s murder, in which Giancana was allegedly involved, the 42 Gang became an extension of the Outfit. Gangsters like like Frank “The Enforcer” Nitti (also buried at Mount Carmel), Paul “The Waiter” Ricca (buried across the street at Queen of Heaven) and Tony “Joe Batters” Accardo (buried at Queen of Heaven) took notice of Giancana and in the late 1930s, Giancana became the first 42er to join the Outfit. 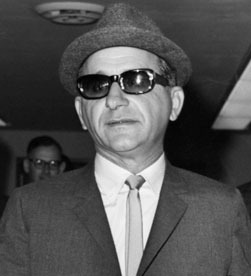 After doing some prison time in the early 1940s, Giancana set out to take over Chicago’s illegal lottery gambling operations, specifically those in the city’s mostly African-American neighborhood. Through a brutal string of events, including kidnappings and murder, he and his associates got control of the numbers racket, increasing the Chicago Mob’s annual income by millions of dollars.

When Accardo stepped down as head of the Outfit in the mid-1950s, Giancana took his place. By 1955, he controlled the gambling and prostitution operations, narcotics trafficking, and other illegal industries in Chicago. He later told an FBI agent that he “owned” not only Chicago, but Miami and Los Angeles as well. 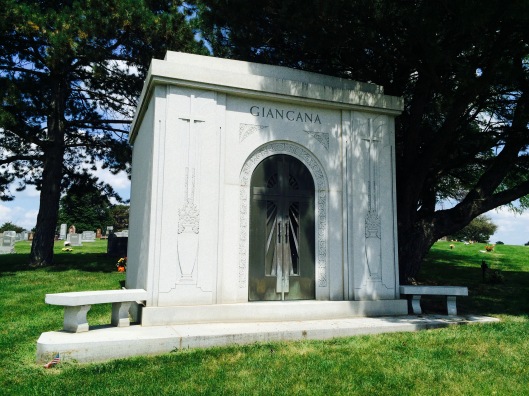 The Giancana family mausoleum is located on the far west side of the cemetery.

In 1965, Giancana went on trial for refusing to testify before a Chicago grand jury investigating organized crime and was sentenced to a year in jail. After his release, Giancana lived in self-imposed exile in Mexico until 1974. Extradited by Mexican authorities to testify before another grand jury, he was given immunity from federal prosecution and appeared before that jury four times, but provided little information worth using.

Giancana was then called to testify before a U.S. Senate committee investigating Mafia involvement in a failed CIA plot to assassinate Fidel Castro. Before he could testify, Giancana returned to his Chicago home on June 17, 1975. Two days later, Giancana was shot once in the back of the head and several more times up through the chin with a .22-caliber pistol while cooking sausages and peppers in his basement. 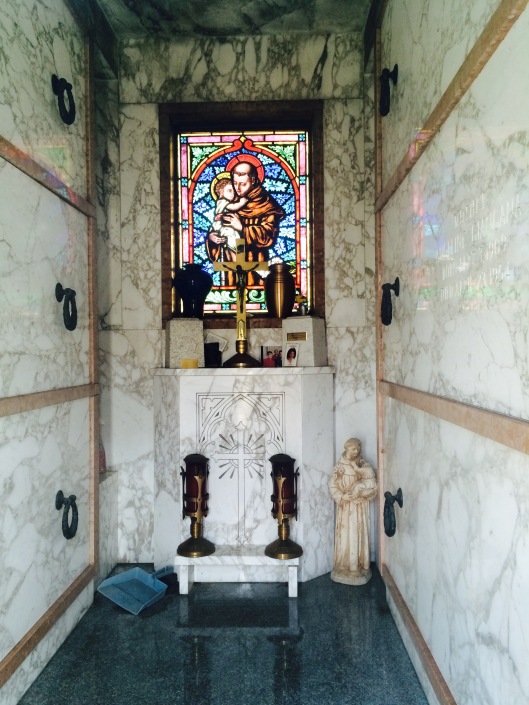 I was able to get a decent photo of the interior of the Giancana mausoleum. Oddly, there was a dustpan inside.

While many theories exist as to who killed him, no one was ever arrested in connection with the murder. Some think it was someone Giancana knew that he let in the house because he himself could not handle spicy foods and may have been cooking them for a friend.

Next week in Part II, we’ll visit a bride who died young, noted Chicago bishops and a beloved American actor. You won’t want to miss the rest of Mount Carmel’s story.

6 thoughts on “Dead Men Tell No Tales: A Walk Through Mount Carmel Catholic Cemetery (Part I)”