Last week, I put the spotlight on the bad boys buried at Mount Carmel Catholic Cemetery. Lest you think only gangsters rest in peace there, I’m going to change gears and share the story behind the beautiful Bishops’ Mausoleum, located in the center of the cemetery.

Located in the heart of the cemetery, the Bishops’ Mausoleum holds the remains of two bishops, two archbishops and three cardinals.

Informally called the Bishops’ Mausoleum, the full name is the Mausoleum and Chapel of the Archbishops of Chicago. It was built between 1905 and 1912, at the order of Archbishop James Quigley (who is interred inside of it).

Here’s a closer look at the Bishops’ Mausoleum, which is closed to visitors. Above the door is “RESURRECTURIS”, which means “for those who will rise again”.

Archbishop Quigley chose architect William J. Brinkman to design the Mausoleum. The son of German immigrants, he supervised the construction of Chicago’s Masonic Temple, a skyscraper that was the world’s tallest building at the time of completion in 1892. 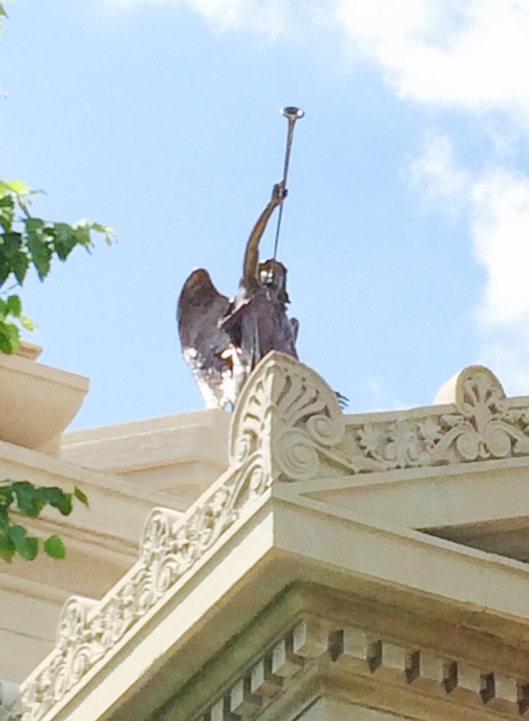 This is the best picture I could get of the Arcangel Gabriel blowing his trumpet.

Brinkman also designed several churches, among which are St. Josaphat’s, St. Michael’s in South Chicago and St. Mary’s in Buffalo Grove. He was one of the three architects involved in the design of Our Lady of Sorrows Basilica.

Here’s an odd postscript about Brinkman, who died before the Mausoleum was completed. His decapitated body was found on train tracks near 73rd Street in February 1911. Contradictory evidence prevented an inquest from determining a clear reason for his death or a finding of murder. Was it suicide or was he pushed onto the tracks?

Brinkman’s funeral was held at St. Leo’s Church on 78th Street, a church he had himself designed in 1905. His death remains unsolved. 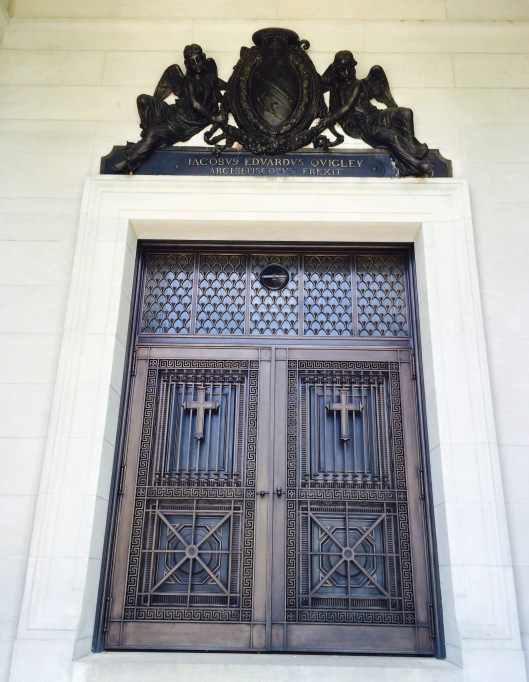 The front door of the Bishops’ Mausoleum, completed in 1912.

Archbishop Quigley chose Aristide Leonori, noted for his 1899 design of the Mount St. Sepulcher Franciscan Monastery in Washington, D.C, to handle the mausoleum’s interior. Leonori reportedly relied heavily on marble and mosaics to give the chapel a Roman look while still referencing Celtic, Nordic and Slavic saints in the design so it would reflect the archdiocese’s many ethnic groups and national churches.

I wish I’d been able to see the inside of the Bishops’ Mausoleum, but it was tightly locked up.

The most famous of this group of two bishops, two archbishops and three cardinals is Cardinal Joseph Bernardin (1928-1996). He was much beloved in Chicago and considered by many to be a candidate for the Papacy.

A native of Columbia, S.C., Cardinal Bernardin was the son of Italian immigrants and became a much beloved figure in Chicago.

As the son of Italian immigrants, Bernardin had early ambitions to be a doctor but later chose the priesthood. Ordained a priest of the Diocese of Charleston in 1952 (which covers all of South Carolina), he served there 14 years.

In 1966, Pope Paul VI appointed now Monsignor Bernadin titular Bishop of Ligura and Auxiliary Bishop of the Archdiocese of Atlanta. His episcopal consecration took place that same year and at only 38 years of age, Bernardin became the youngest bishop in America.

Over the next years, Bernardin ascended in rank and prominence. Following the death of Cardinal John Cody of Chicago in 1982, Pope John Paul II chose Archbishop Bernardin to lead the Archdiocese of Chicago.

On Nov. 20, 1996, after a battle with pancreatic cancer, Cardinal Bernardin joined his predecessors in the Bishops’ Mausoleum. He visited there a few months before his death to choose a crypt. Choosing one next to Cardinal Cody, he remarked, “I’ve always been a little left of Cody”. 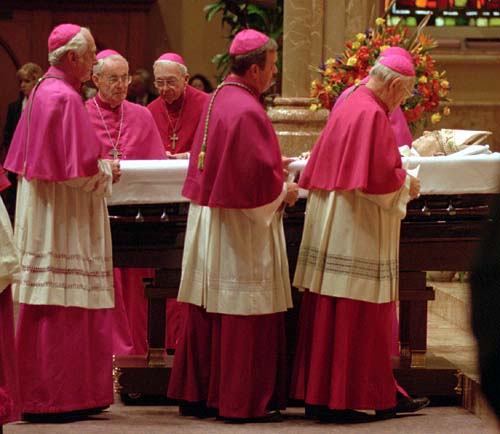 Bishops pass the body of Cardinal Joseph Bernardin in Holy Name Cathedral in Chicago. Picture by the Cincinnati Enquirer.

Located very close to the north gate is the grave of a young bride who did not possess the infamy of a gangster or reverence of a Catholic Cardinal. But her story has made her almost as famous in some circles.

Many stories swirl around the life and death of the Italian Bride, Julia Buccola Petta.

For many years, rumors and ghost stories have abounded about the Italian Bride of Mount Carmel Cemetery. I found a fantastic article by Adam Selzer, who has a blog called Mysterious Chicago. He spent considerable time finding the truth amid the sensationalism. While some of the legend is faulty (such as the assertion that she died on her wedding night), the basis of it appears to be true.

Julia Buccola and her mother, Filomena, came to Chicago from Palermo, Italy in 1913, joining Julia’s siblings Joseph, Henry and Rosalia. Filomena’s surviving descendants said the death of her own husband in Italy had left her a bitter woman who depended a great deal on her children.

Oddly enough, Julia’s last name appears nowhere on her elaborate monument. But her mother’s full name appears on it twice.

Julia on her wedding day.

According to Selzer’s article, Julia married Matthew Petta in 1920. Her death certificate reveals that she died in childbirth almost exactly nine months after her wedding. Two days later, she and the baby were buried in the same plot at Mount Carmel Cemetery, near the north gate. She was only 29 when she died.

Julia’s husband remarried a few years later and moved away. In the years after Julia’s death, Filomena moved back and forth between Chicago and Los Angeles (where son Henry and his family now lived).

Five years after Julia’s death, Filomena claimed she was having terrible nightmares in which her daughter demanded to be let out of her grave. Being a rather demanding mother, she pressured Henry into having his sister dug up. Having become a successful designer of women’s clothing, he could afford it.

This photo was taken after Julia’s casket was exhumed and opened. You can see the empty hole and dirt in the background. Around this photo are the words “Questa fotografia presa dopo 6 anni morta”. That means “a body that does not decay is called incorruptible”, a condition observed in several saints.

Six years after her death, Julia Buccola Petta’s casket was exhumed and opened. You can see it in the photograph installed on the new monument that was placed there after she was reburied. Julia looks amazingly, uhm, fresh for having been underground for all that time.

So why did Filomena go to all that trouble? Some think it wasn’t nightmares at all but that she wanted a new, more elaborate monument to take the place of Julia’s much smaller gravestone. Son Henry grudgingly ended up paying for that as well. Since Filomena’s name is on it not once but twice, perhaps she was looking for a little bit of attention herself.

Some people have claimed to see a woman in white visiting Julia’s grave. I didn’t see anybody during my visit. But it was broad daylight on a hot, humid day so that’s not surprising.

There’s one more resident of Mount Carmel that I want to talk about. He’s buried in the far Northwest corner of the cemetery, not far from Sam Giancana’s mausoleum. His grave is marked by a simple flat stone that took me a little time to find. 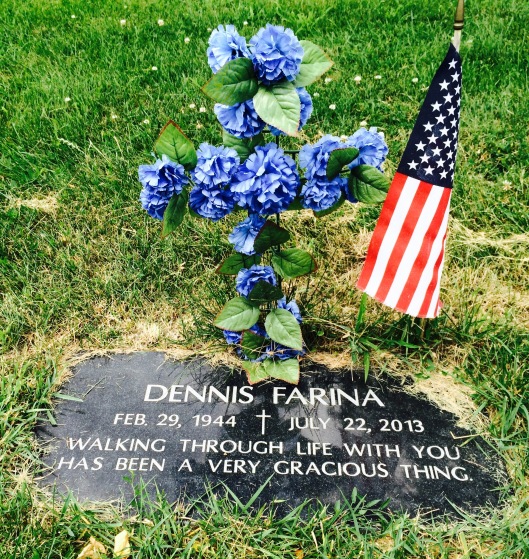 I first became aware of Dennis Farina from the 1986 NBC TV show Crime Story. My Dad was a huge fan of classic 60s automobiles and the show was set in that era, so he watched every episode. Farina played hard-bitten Chicago cop Lt. Mike Torello.

I found out years later that Farina was a cop in Chicago’s burglary division for 18 years before becoming an actor. He began working for director Michael Mann as a police consultant, which led Mann to cast him in a small role in the 1981 film Thief. He left the Chicago PD in 1985 to become an actor full time.

Two of Farina’s best-known movie characters are Jimmy Serrano, the mob boss from Midnight Run, and Ray “Bones” Barboni, a rival criminal to Chili Palmer in Get Shorty (for which he won an American Comedy Award). Farina also played FBI agent Jack Crawford in the first Hannibal Lecter crime film, Michael Mann’s Manhunter. He was good at portraying rough and tough characters but had great comic timing as well.

Having battled lung cancer, Farina died in July 2013 from a pulmonary embolism. Michael Mann told the Chicago Tribune, “He was the best guy on the planet. And he was a lot more than a nice guy. He had the charisma and the ability as a storyteller and raconteur to hold your interest. He appreciated the fullness, the roundness, of human life.”

Because Mount Carmel has so many monuments featuring portraits of the deceased on them, they will be the focus of next week’s blog post. I hope you’ll come back to see them.