Last week, I began my tour of Lincoln, Nebraska’s Wyuka Cemetery. This week, we’ll visit several of Wyuka’s memorials devoted to various events/groups. I’ve never been to a cemetery that has so many, but they are all thoughtfully and tastefully done.

Before I do that, I wanted to highlight two things. I’ve always admired Nebraskans for their strength of character and sensible nature. However, when I found out about Wyuka Cemetery’s cast iron fence, my opinion of them only rose higher.

The Southern border of Wyuka is lined by a long fence that edges O Street. I thought nothing of it when I was photographing in that area. The guide book, however, shares its impressive past.

John Seaton’s firm created this cast iron fence. He was well known for his foundry in Atchison, Kansas, which employed an estimated 2,000 men at one time.

The fence was originally installed in 1891 around the first campus of the University of Nebraska, made up of 10 acres bounded by R, T, North 10th and North 12th Streets. The fence’s narrow gateways hampered efforts of Lincoln firefighters to combat fires on campus, including one that severely damaged the State Museum building in 1912.

This problem inspired prominent Nebraska businessman Charles Morrill to make donations that resulted in a new natural history museum, Morrill Hall. Built in 1925, it still stands today and houses a wonderful collection of fossils and other archaeological treasures. That same year, the campus fence was removed and reinstalled at Wyuka, with a wide front entrance. I love the fact that they re-purposed this fence and didn’t toss it into a landfill.

The other thing I wanted to highlight was the grave of Harrison Johnson, which is located beside the fence. 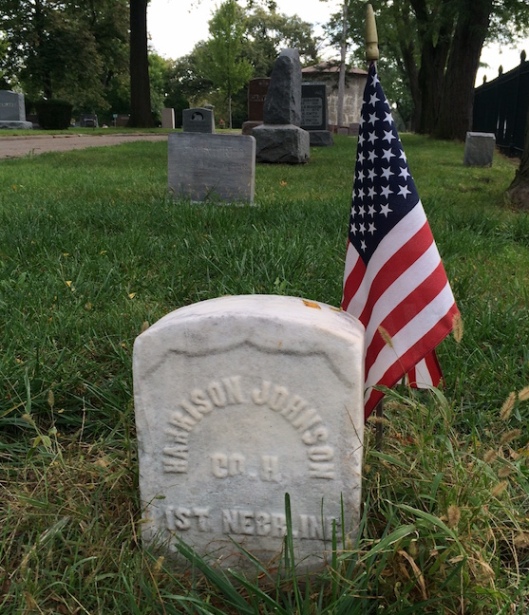 An escaped slave, Harrison Johnson served with distinction in the Civil War with the Nebraska First Infantry. His son, John Johnson, was a talented photographer who worked in Lincoln in the 1910s and early 1920s.

African-Americans were not enlisted in the Union Army until President Lincoln changed the nation’s policy with the Emancipation Proclamation in 1863. Before that, the First Nebraska Regiment was officially all-white. An Arkansas native and slave, Johnson escaped and sought out Nebraska’s First Regiment. He was allowed to enlist as a private and served out the war with the regiment. At war’s end, Johnson settled in Lincoln, joined the Farragut Post of the Grand Army of the Republic (GAR) and worked as a hotel cook and janitor.

Near the eastern border of the cemetery is the 9/11 Memorial, dedicated to those who lost their lives on September 11, 2001 during the terrorist attacks on the World Trade Center, the Pentagon and United Airlines Flight 93. The two red-painted steel I-beams symbolize the World Trade Towers, but did not come from the buildings themselves.

Wyuka’s 9/11 Memorial is located close to the Nebraska Firefighters Memorial in Section 41.

Across the way is the Nebraska Firefighters Memorial, one of the largest I have ever seen. Names of project donors are inscribed on plaques, benches and paving blocks leading up to and surrounding the statue. 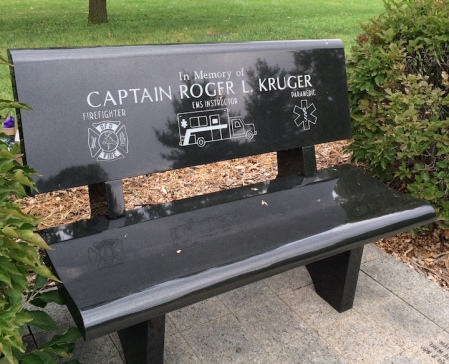 Captain Kruger was delivering Christmas turkeys to needy families when the truck in which he was a passenger slid off an icy road and hit another vehicle.

The memorial sculpture was decorated for fall so you can’t properly see the inscription on the front.

The centerpiece of the display is a large bronze figure of a kneeling firefighter, sculpted by S. Mariami in 2001 and dedicated in 2003.

A plaque featuring “A Firefighter’s Prayer” is on the side of the base of the sculpture.

The author of “A Firefighter’s Prayer” is unknown.

Close by in Section 42 are the Desert Shield/Desert Storm memorials.

These black granite monuments commemorate those who served in Desert Shield and Desert Storm, the U. S. military actions against Iraq in 1990 and 1991. The monuments were added in 1992.

The Purple Heart Monument was installed on Veterans Day 2003.

This red granite monument is inscribed with a replica of the Purple Heart, America’s traditional medal awarded to military personnel wounded in combat. Congress provided one of these monuments to each state in the Union and Wyuka was chosen as Nebraska’s location.

The Soldiers’ Circle is located on a large grassy section across from the Desert Storm/Desert Shield and Purple Heart Memorials. It was established in the early 1900s for veterans of America’s armed services who served after the Civil War. In a century’s time, 1,258 veterans were interred here before the area was filled.

Wyuka’s Soldiers’ Circle is dedicated to those who served in the military after the Civil War.

This memorial monument in the Soldiers’ Circle was dedicated in 2001.

All of these memorials are special in their own way. But I must admit that Wyuka’s Holocaust Memorial has to be one of the most creative and movingly designed that I have ever seen.

The Wall of Remembrance of Wyuka’s Holocaust Memorial is a brutal but honest photographic representation of this tragic era in history.

Nebraska’s only Holocaust memorial was dedicated at Wyuka Cemetery in 2006. Through text, photographs and a sculpture by Candian Morton Katz, it teaches about the systematic slaying of six million European Jews and over five million others by the Nazi regime while paying respect to those lives lost.

Morton Katz’s sculpture combines the symbolism of the triangle, which Jews and other targeted persons were required to wear, and a three dimensional Star of David, the emblem of Judaism.

Embedded in the gravel surrounding the sculpture are squares bearing the names of victims of the Holocaust and where they died. Visitors are invited to leave a stone on the base of the sculpture as an act of remembrance, which I did.

Plaques bearing the names of Holocaust victims are nestled amid the gravel that surrounds the sculpture.

Back over next to the Soldiers’ circle is the GAR Section. In 1892, the Nebraska legislature required Wyuka to create a section for the free burial of “G.A.R men,” members of the Grand Army of the Republic (the Union veterans’ organization). Eventually over 400 soldiers and sailors were buried in this section, and nearly 1,000 Civil War veterans were buried throughout the cemetery.

Wyuka’s GAR section was set aside for the burial of Union veterans who served in the Civil War.

On the edge of the GAR section is the impressive granite and bronze monument of John M. Thayer, who was elected governor of Nebraska in 1886 and 1888. The Massachusetts native, arriving in the 1850s, helped raise the First Nebraska Regiment when the Civil War broke out. He led the regiment in major engagements such as the Battle of Shiloh. 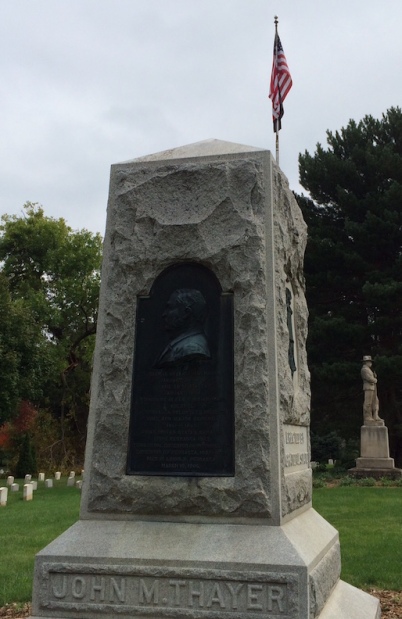 Born in Massachusetts, William Thayer served with distinction as leader of the First Nebraska Regiment during the Civil War, promoted from colonel to major general in the course of the conflict.

After the war, Thayer helped secure Nebraska’s admission to the Union in 1867 and was appointed as the first U. S. Senator from the new state. He also served as the appointed Governor of the Wyoming Territory from 1875 to 1879.

According to the guide book, Thayer’s second two-year term as governor of Nebraska was extended by a controversy surrounding the election of 1890, in which he did not run. On inauguration day, former Governor Thayer refused to turn over the office to Governor-elect James Boyd (born in Ireland) on the grounds that the latter was not legally qualified because he was not a citizen of the United States.

William Thayer stirred up controversy after his last term as Nebraska governor.

Governor James Boyd had to wait a year to officially begin his term due to questions raised by his predecessor (Thayer) regarding his citizenship. Photo source: Nebraska State Historical Society.

As a result, Thayer held the office an extra year until the U. S. Supreme Court ruled that Boyd had been “naturalized” as a citizen automatically when Nebraska was admitted to the Union. Boyd, for whom the state’s Boyd County is named, is buried at Omaha’s Forest Lawn Cemetery (which I visited later that week).

Next week, I’ll feature some of what I know you’re eager to see, Wyuka’s stunning statuary. I’ll also spotlight some of the more unique gravestones and stories. I hope you’ll join me as I continue the tour.