Having left Plainfield Cemetery, I looked on the Find a Grave app (very handy indeed!) to see what else might be on the way to Grand Island. I saw that nearby Aurora boasted a sizable cemetery worth seeing. So after driving into town, we headed north and about a mile away was Aurora Cemetery. 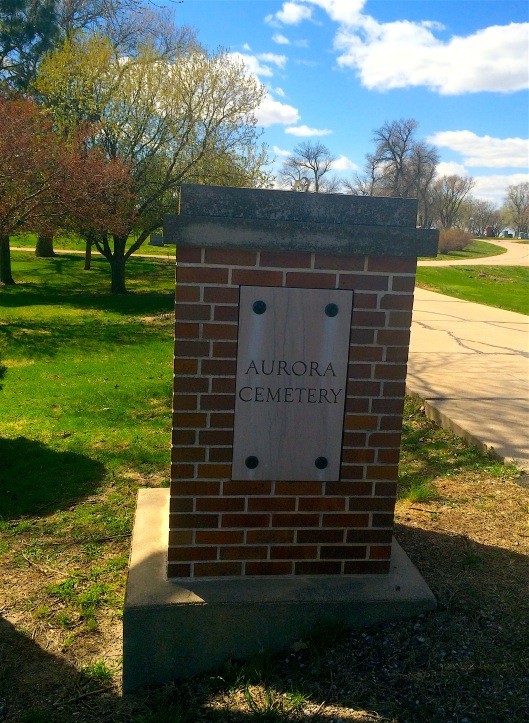 Entrance to Aurora Cemetery, established in the late 1870s.

There’s one thing I’d like to address right off the bat. I wasn’t aware of it until recently that Aurora Cemetery is popular among the paranormal crowd because of the legend of the witch supposedly buried at its far corner. I didn’t know about it so I didn’t visit the grave.

As it turns out, the legend is totally false. The woman some claim was a witch, Susan Gavan, was not. She was simply a wife and mother who died at the age of 40, leaving a husband and several children. But because her marker is chained off (like some graves I’ve seen over the years) and at the far edge of the cemetery, the legend grew. Kids still apparently visit the grave on Halloween and dare each other to step on it. 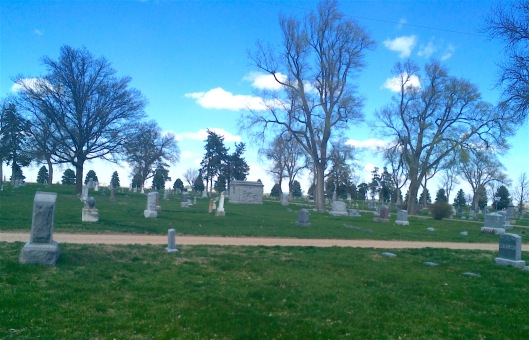 Like almost every Nebraska cemetery I’ve ever seen, Aurora is well maintained. I wish all states cared for their dead this well.

How the town of Aurora came to be is interesting in itself. A group of seven men from Lucas County, Iowa were keen to form a company and move to Hamilton County with the purpose of founding a town. I don’t know why they wanted to move 230 miles west from their current homes. But one of the group, Stillman P. Lewis, had visited Hamilton County and gave it his stamp of approval. He’s buried at Aurora Cemetery.

The rest were not so sure but Robert Miller (buried at Aurora Cemetery) and Nathaniel Thorpe went west to visit the site David Stone had chosen on Lincoln Creek months before and were pleased.  It was laid out as a town in 1871 by David Stone who named it after his former hometown of Aurora, Ill.

Aurora’s fortunes improved significantly in 1879 when the Burlington and Missouri Railroad began service there. 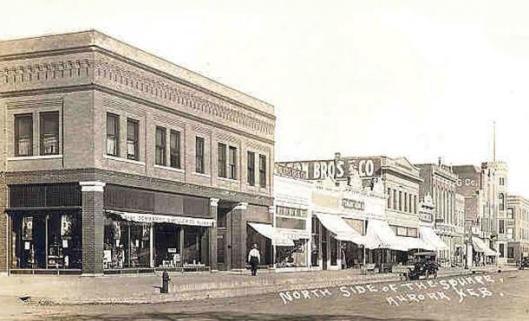 Postcard of Aurora, sometime during the early 1900s.

Civil War veteran Brevet Brigadier General Delavan Bates was the man behind Aurora Cemetery. A native of New York, General Bates was awarded the country’s highest award for bravery during combat, the Medal of Honor, for his action (ironically) in Cemetery Hill, Va. during the Battle of the Crater on July 30, 1864. While leading his troops in battle, Bates was seriously wounded about his chest and arms, in addition to receiving a bullet in the face (ouch!).

You might remember in my visit to Augusta’s Magnolia Cemetery that a soldier (Lieut. Nathan Elcan Levy) buried there fought and died at the Battle of the Crater.

After the war, General Bates married and eventually moved with his wife to Hamilton County after purchasing a homestead. He was active in helping establish Aurora as a town, holding many public offices over the years, including mayor.

But making sure Aurora had a cemetery was especially close to his heart, and the General was instrumental in securing a site. Arrangements were made to purchase the land from the Union Pacific Railroad Company (UPRC), but subscriptions were not forthcoming and the contract for the land was cancelled.

When his son, Loraine, died in 1874 General Bates began investigating the condition of the cemetery, renewed the contract with UPRC, making all payments until the town was incorporated. At that time the contract was turned over to Aurora. He served as superintendent of the cemetery for the first 16 years at a nominal salary.

On June 11, 1877 in an article in the Aurora Republican, Bates stated:

“While yet alive and well, it becomes us as intelligent beings to make some provision for our final resting place. A spot of earth that we can call our own, around which we can plant the cypress and the willow and to which our friends can bring kind tokens of remembered when we have gone the way that all must go”.

Brigadier Brevet General Delavan Bates died in 1918. In addition to his military marker, his grave has a lovely white bronze (zinc) monument. I didn’t see it while we were there but I wish I had. (Photo source: Thomas Fisher, Find a Grave)

The 40-acre cemetery is home to approximately 22,000 burial sites. So it’s fairly large but not overwhelming. There is still plenty of room for future burials.

Aurora has a few mausoleums, and the one for the Woodard family looks fairly recent. Although he is not interred within it, Dr. Daniel S. Woodard is buried nearby. The patriarch of the family, Dr. Woodard was born in Virginia and completed his medical degree at St. Joseph Medical College in Missouri around 1882. He and his wife, Sarah, arrived in Hamilton County soon after and he set up shop. 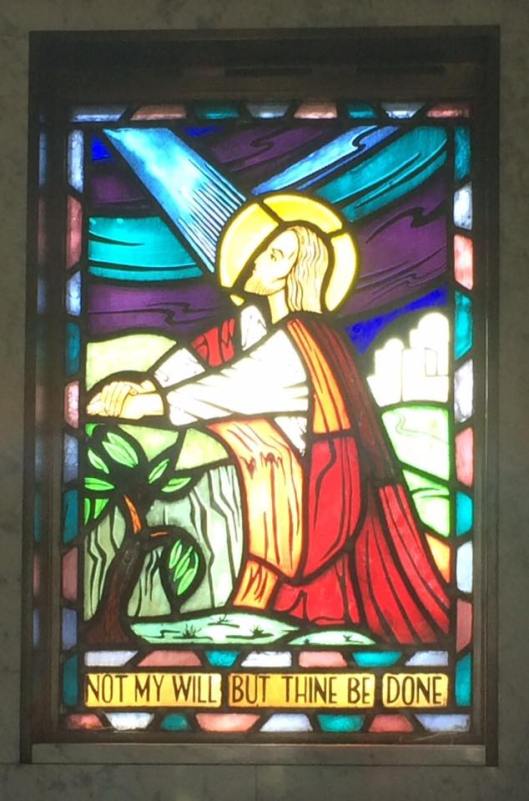 In 1886, Dr. Woodard ran as Representative to the Legislature on the Democratic ticket, but was defeated. Like many other prominent businessmen, he was a member of a number of fraternal organizations such as the Masons and the IOOF (International Order of Odd Fellows). But there was one in his bio that I didn’t recognize: the AOUW, or the Ancient Order of United Workmen.

This got my attention because I saw the AOUW symbol on some of the graves I saw as we walked around. 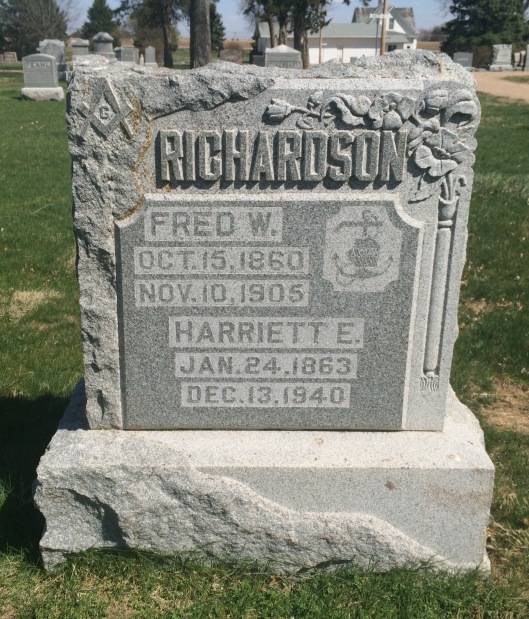 Fred Richardson was a Mason and a member of the AOUW, like many of his fellow businessmen. You can see the symbol to the right of his name.

The AOUW was established by John Jordan Upchurch in 1868 in Meadsville, Pa. He was dissatisfied with the League of Friendship of the Mechanical Order of the Sun. He wanted an organization that would be more responsive to the needs of its members and unite the conflicting interests of labor and management. The goal, in the following year, changed to providing benevolent insurance protection for its members’ widows and orphans.

Official symbol of the Ancient Order of the United Workers (AOUW).

The AOUW, which by 1885 was the largest fraternal benefit society in America, discontinued its supreme lodge structure in 1929. A congress was established in place of the supreme authority. In 1952, the AOUW dissolved or merged with various state societies.

Aurora does have some interesting monument styles that I enjoyed seeing. The one for the Blizard family definitely stood out.

The Blizard family monument stands out because of the contrast of the elegant, detailed Corinthian-style column supporting the rough-hewn stone that surrounds it.

I’ve seen this style of monument before but not often in a rural cemetery. I would see it again at Grand Island City Cemetery.

At the time I photographed the Barton family monument, I knew nothing about them. It was the style of their monument that caught my eye.

The Barton family monument has an unusual shape to it.

Silas Reynolds Barton was the famous member of the family. Born in 1872, he moved with his parents from Iowa to Hamilton County soon after. In addition to farming, he taught school for a time. He was deputy treasurer of Hamilton County, (1898-1901), grand recorder of the AOUW of Nebraska, (1901-1908) and Nebraska State Auditor (1909-1913).

Silas Reynolds Barton was running for his second term in Congress when he died shortly before election day in 1916.

In 1913, he was elected as a Republican to the 63rd Congress, serving until 1915. Running as a candidate for election to the Sixty-fifth Congress, Barton died suddenly on Nov. 7, 1916 from acute pneumonia before election day. He was 44.

Then there was the Michael family monument. Now I know Cinderella’s last name!

Does this mean Prince Charming’s first name was Joseph?

When I saw the graves of Delta Merritt and her children, I felt a wave of sadness wash over me.

Raymond Merritt and Delta Lopeman married in Council Bluffs, Iowa on Jan. 24, 1924. While their marriage record states that he was 22 and she was 18, census records indicate both were younger at the time. Both were more likely closer to 17. I suspect they went to Iowa to marry for this reason. 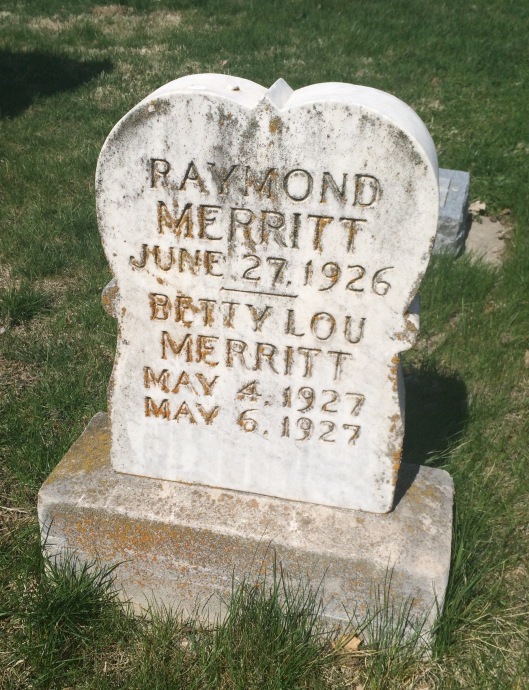 The Merritt children both died in infancy. I don’t know if Delta and Raymond had any children that survived.

A shared marker for Raymond Jr. and Betty Lou Merritt indicates both died in infancy. Raymond Jr. died on his birthday of June 27, 1926 while Betty died on May 6, 1927.

Nearby is the grave marker of Delta Merritt, who died the same year as Betty Lou. I don’t know if she died giving birth as I don’t have her exact date of death. She was only 20 when she died. Regardless, both her marriage and her life were too short.

Records indicate Raymond moved away and was living in David City, Neb. as a baker in 1930. The Social Security records indicate he died in Kansas in 1947. I don’t know if he ever remarried.

I’m glad we stopped at Aurora Cemetery but it was time to move on. I just hope the Hoefer family doesn’t mind that I took a little breather on their family bench.