With a population of around 50,000, Grand Island is the fourth largest city in Nebraska. Located about 90 miles west of Lincoln, it’s home to the Nebraska State Fair.

Grand Island got its name from the French La Grande Ile, referring to a large island in the Platte River. Inhabited by the Pawnee, fur traders (many of them French) probably discovered the island in the late 1700s. Travelers heading west noted it in their journals. Hall County’s first settlers came in 1857 when three Iowa-based businessmen saw the economic potential of a town near Grand Island, speculating that the Union Pacific Railroad would soon follow. And they were right.

While that initial venture went bankrupt, the 37 German settlers hired to start Grand Island (as a city) stayed. Most of them came from the area of the German-Danish border, Schleswig-Holstein. It explains why some of the grave markers we saw were inscribed in German. 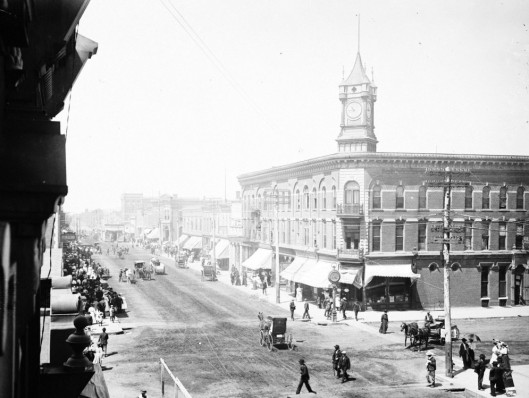 Grand Island’s business district during the 1890s. You can see the Michelson Building and its distinctive clocktower in the background. It was built around that time and still stands today (minus the clocktower). Photo source: Stuhr Museum of the Prairie Pioneer.

Oddly enough, La Grande Ile ceased to exist not long after Grand Island was incorporated in 1872. It happened when the north channel of the Platte River was dammed to prevent the yearly flooding of crops. So if you’re visiting Grand Island with the hope of seeing a real island, you’re going to be disappointed.

Grand Island’s downtown area was pretty busy when we were there. If you’re looking for some tasty pizza, give the Wave Pizza Company a shot. 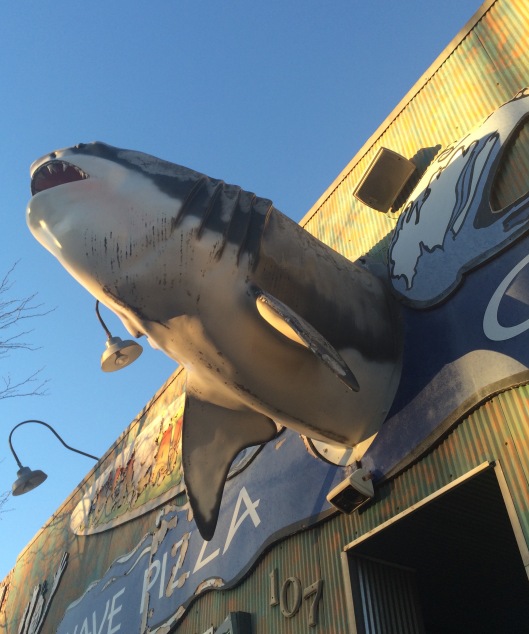 Despite the fact it’s landlocked, Grand Island does have a resident shark at the Wave Pizza Co.

Grand Island is home to the Stuhr Museum of the Prairie Pioneer. Christi and I spent a number of hours visiting. It even has a replica 1890 railroad village you can walk around. It includes the home of actor Henry Fonda, who spent the first six months of his life (1905) in Grand Island. Fonda himself paid for the house to be moved to the grounds of the Stuhr Museum so it would always be taken care of properly. 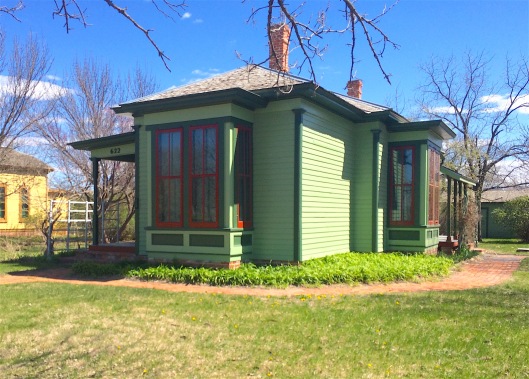 Henry Fonda only lived in this home for six months before his family moved to Omaha.

Grand Island City Cemetery was established in the 1860s with George Thummel and William Platt as owners of about 20 acres. In May 1897, the Grand Island City Council approved a “New Cemetery” north of Stolley Park Road. It was then that the city took control of the Thummel-Platt Cemetery.

Record keeping prior to 1897 was poor, showing only the purchaser of the lot, and no burial information. The oldest marker found is for Sarah Shoemaker, who died on July 6, 1863.

Covering 90 acres, the current cemetery is split by busy Stolley Park Road. The northern half is the older part and was well planned.

I noticed at least two pergolas built on family plots, something I haven’t seen in a cemetery before. They provide a shady place to sit and visit. I wonder if it’s a local tradition of some sort.

A pergola offers shade to the Mayer family plot. Arthur Cleveland Mayer was a prominent attorney in Grand Island.

The pergola for the Ross plot is covered in vines, unlike the Mayer one.

In my earlier post about Aurora Cemetery, I talked about the Blizard family monument’s unusual style. I’d seen a few at Atlanta’s Westview Cemetery as well. At Grand Island, there are two monuments that while not as tall or dramatic as the Blizard monument, share this motif.

The first one is for the Dahlstrom family. A native of Sweden, Charles August Dahlstrom came to America as a young man in the 1870s, spending a few years in Boston then Omaha. But he found true success in Grand Island as a farmer. He died in 1910.

The Dahlstrom monument makes you think it was unfinished but that’s not the case.

An identical monument marks the Dudey family plot. A native of New York, Alonzo Dudey spent several years farming in Kansas until his first wife, Janet, died. He moved to Grand Island not much later and married again, to Irene Elizabeth “Lizzie” Hoes. Alonzo died in 1937.

The Dahlstrom and Dudey monuments are pretty much the same.

Because I couldn’t remember what this motif meant, I consulted Tui Snyder’s blog as she is a great resource for all things cemetery. According to her, half-carved stones signify that while we may do many great things while on Earth, there’s more to learn and do in the afterlife. So we shouldn’t pat ourselves on the back about how much we did when we were alive. O the soul level we have a lot more “polishing” of our rough edges to do.

There’s a 27-year gap between the deaths of Charles Dahlstrom and Alonzo Dudey. But I don’t know when either monument was purchased and placed. Regardless, both families clearly liked the style and chose it for their families.

I mentioned Lizzie Hoes Dudey earlier, and near the Dudey plot is the Hoes family vault. I admit it, I giggled at the name! But the vault itself is worth pointing out because of its tile work. The intricate nature of the green and white tiles must have been placed by hand.

The intricate tiled design of the Hoes family vault is unique. 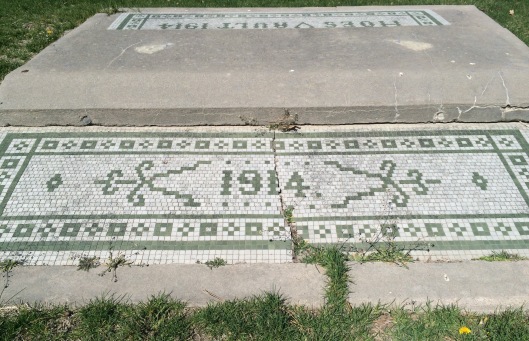 You can get a better look at the tiles in this picture.

While some of the tiled sections are being encroached upon by weeds and there’s a large crack, I think it’s held up amazingly well. Sadly, the inscription on the top is almost impossible to read because it’s so faded.

The vault was made for Irene’s Uncle Albert Hoes and his wife, Margaret. Lizzie’s father, John Hamilton Hoes, must have been very close with his brother Albert. Census records indicate that younger brother Albert headed to California during the 1880s gold rush. John, his wife Melvina, and their children joined him there. Albert married Margaret McBride in California during this time.

The brothers’ fortunes must not have improved much because by 1883, both were in Grand Island, Neb. While John and Melvina had 12 children (including Lizzie), Albert and Margaret adopted at least one daughter (Mary) and possibly a son. The brothers became farmers and did quite well.

Albert died in 1926 from injuries he received in a fall off of a ladder. He is the only one buried in the Hoes vault because Margaret moved to California. The 1930 Census lists her as living in a lumber camp and working as a nurse. She died in 1942. Although her name and birthdate were inscribed on the Hoes vault, her death date is empty. Margaret is buried in Placerville Cemetery in Eldorado, Calif.

I  don’t know why the date 1914 is on this vault since Albert didn’t die until 1926. My guess is that he purchased the plot at that time and ordered the vault to be built then.

Our final unique find is the Clinger family vault. It got my attention because there’s none like it in the cemetery. I can’t tell what material it’s made out of, but I’m thinking perhaps concrete or plaster. But it does not look like stone to me. 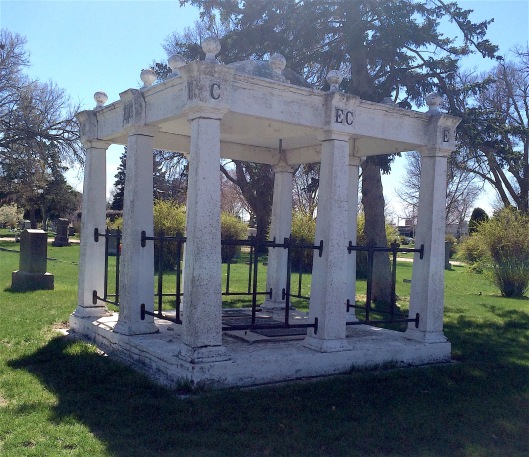 The Clinger family plot’s monument is rather unusual because it doesn’t seem to be made of stone.

Elmer and Edith Clinger are the only two people buried in the vault. I couldn’t find much information about them. Elmer (a machinist) served on the Grand Island City Council in 1907 and 1908. The Clingers had one daughter, Helen, who married and is buried at Grand Island City Cemetery as well. Elmer died in 1951.

After Edith died in 1932, Elmer married Amanda Koehler. She was 39 years his junior. She died in 1970. Amanda is buried at Grand Island City Cemetery with her second husband, Richard Schmidt.

The marble plates on the floor of the monument are marble, with metal plates inscribed with the names. The middle plate tells us it was built in 1920, 12 years before Edith died. Like Albert, Elmer was thinking ahead.

Next week, we’ll explore Grand Island City Cemetery a bit more and I’ll share some more of my unique finds.