Last week, I shared some of Grand Island’s history and reviewed some unique markers/features at Grand Island City Cemetery. Today, I’m starting with a stunning story. One unlike any I’ve ever read concerning a family I researched. There’s only one that comes close.

I photographed the grave of Heinrich “Henry” Egge as an example of the many German markers at Grand Island, a town founded by German immigrants. His marker indicates he was “geb” (short for “geborener” meaning born) in 1830 and “gest” (short for “gestorben” meaning died) in 1879. He was only 49 when he died. 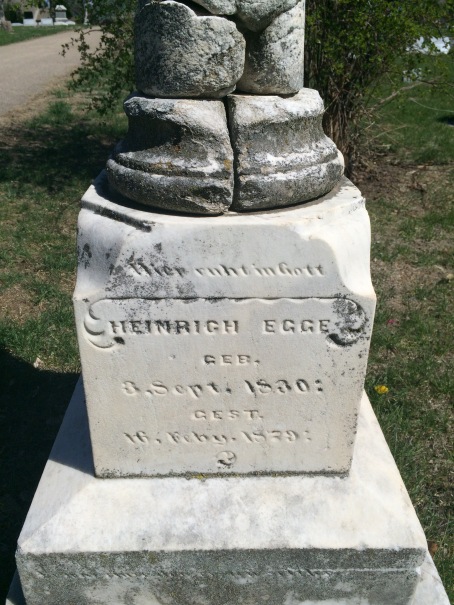 This monument marks the grave of Heinrich “Henry” Egge, a German immigrant and Grand Island pioneer.

A native of Holstein, Germany, Henry Egge was among its earliest settlers. He wrote a diary about his experience of leaving Hamburg, Germany for New York City with his wife, Augusta, out to Iowa, then his journey to Grand Island with one of the groups that visited. Peter Stuhr, another Grand Island pioneer, was a close friend. Henry became a prosperous farmer and was active in town life. 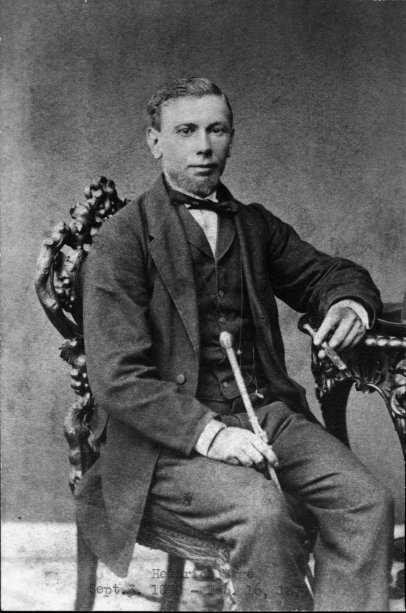 A portrait of Heinrich “Henry” Egge. His diary of his journey from Germany to America then Grand Island is a valuable piece of American history. Photo source: Stuhr Museum of the Prairie Pioneer

At some point in the 1890s, the Egge family’s financial situation took a blow. Funds tied up in a bank that had recently failed sent Henry’s widow and children into a tailspin.  Eldest Egge daughter, Adele, who was 25, was most deeply affected.

On the morning of Dec. 28, 1893, Adele rose and made breakfast, baking cakes. Younger sister Margaret joined her sister, who was eating the cakes she’d made. After taking a few bites, Margaret commented about their bitter taste. Adele smiled and revealed she’d put strychnine in the cake batter and (as a news article noted) that “it was better thus for all of them.”

Horrified, Margaret ran for a doctor who quickly dosed her with an emetic to induce vomiting. But by the time he arrived at the Egge house, Adele was taking her last breaths when she managed to tell him “she was glad she and her sister were out of misery but was sorry her mother and brother had not partaken of the deadly food.” 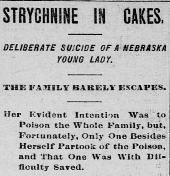 This headline of this article about Adele Egge’s suicide and attempted murder of her family ran in the St. Paul Daily Globe. Several other newspapers printed similar stories.

Fortunately, Augusta and her son, Otto, didn’t eat the cakes and Margaret survived her ordeal. But it devastated the family. Adele is buried somewhere in Grand Island City Cemetery without a marker. I suspect she is next to her father, Henry.

Was the Egge family’s financial situation so dire that Adele thought suicide was the only solution? Most of the articles I found were the same but one written for the Lincoln Daily News hinted that Adele had become “mentally deranged” as a result and caused her to commit the unthinkable act.

Augusta and Margaret moved to Lincoln by 1900. But by the 1920s, Augusta and all of her children (Margaret, Herman and Otto) had moved west to Orange County, Calif. The family (including wives and children) are buried in Fairhaven Memorial Park in Santa Ana, Calif.

German graves (not just at Grand Island City Cemetery) are often marked with the stones “Mutter” and “Vater” for “Mother” and “Father.” 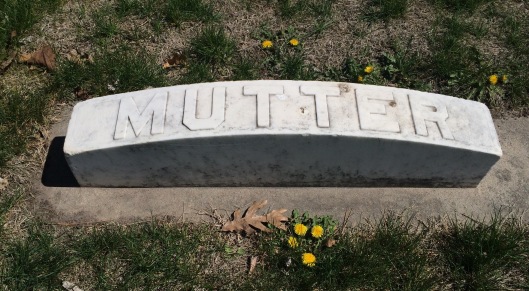 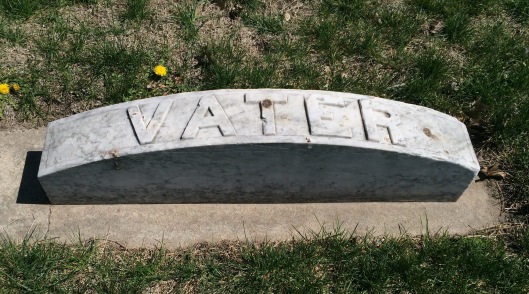 Two metal markers got my attention, one for the Peterson family and the other for a Fanny Bouquett. 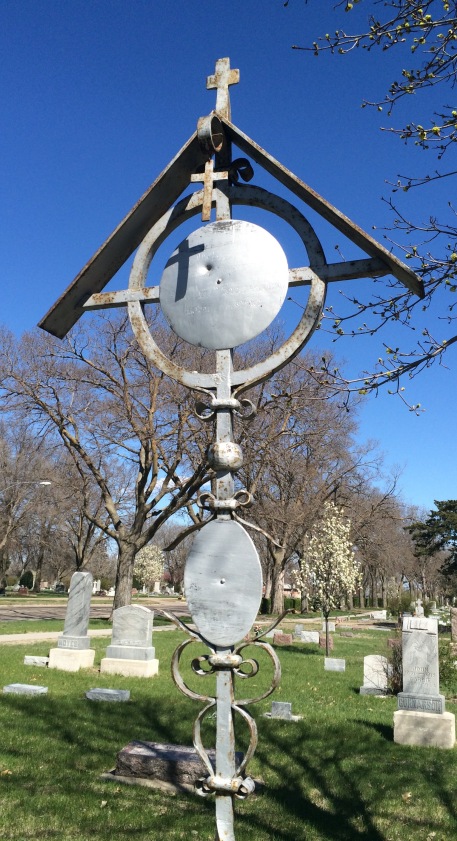 I found little about either family (they seem connected by marriage) so I don’t know who made the markers. Perhaps someone in the families was an iron worker. They look to be in fairly good shape considering P.O. Peterson died in 1898, Marie died in 1920 and Fanny Bouquett in 1910.

The marker for Fanny Bouquett’s grave

Another marker I admired was for John and Wiebke Neubert. I’ve seen a number of things carved on markers, from angels to crosses to pointing fingers. And there’s a Bible on top of this one, a common motif. But this is the first one I’ve seen with a water wheel and a mill. 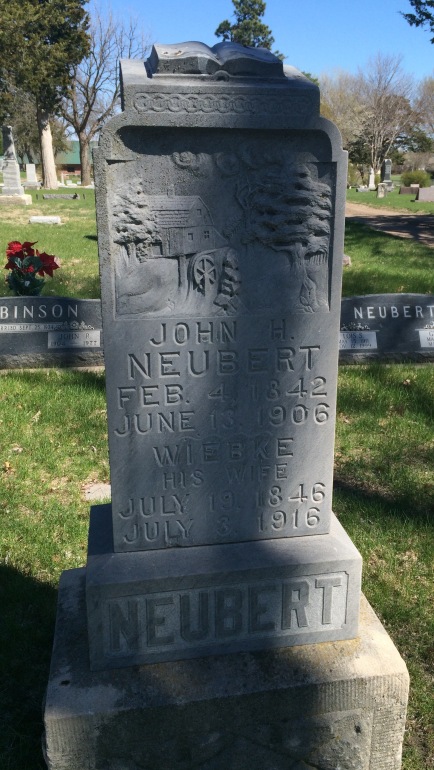 This mill scene is unusual for a monument.

John and Wiebke Neubert were also German immigrants from Holstein, becoming American citizens in 1872. Did they have a mill in Grand Island? Or perhaps in Holstein? Perhaps one of their children commissioned it. Either way, it’s beautifully carved. 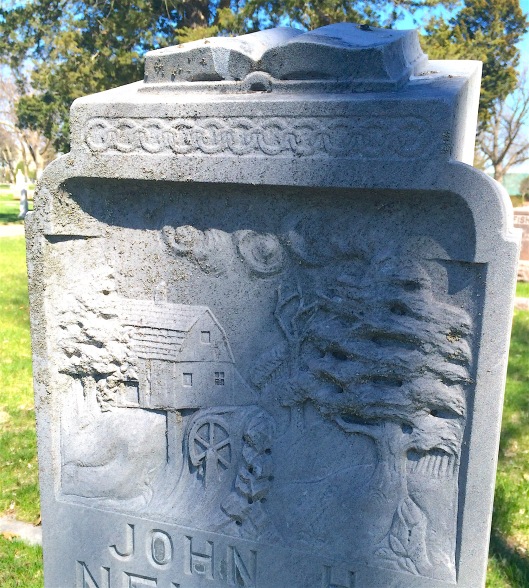 A closer view of the Neubert monument.

The monument for Minerva Merrick has the same base and similar script as the Neubert monument , so the same carver probably did this one as well. The motif of the woman clinging to a cross is not unusual but I think whomever did this particular marker executed it with better skill than many I have seen. 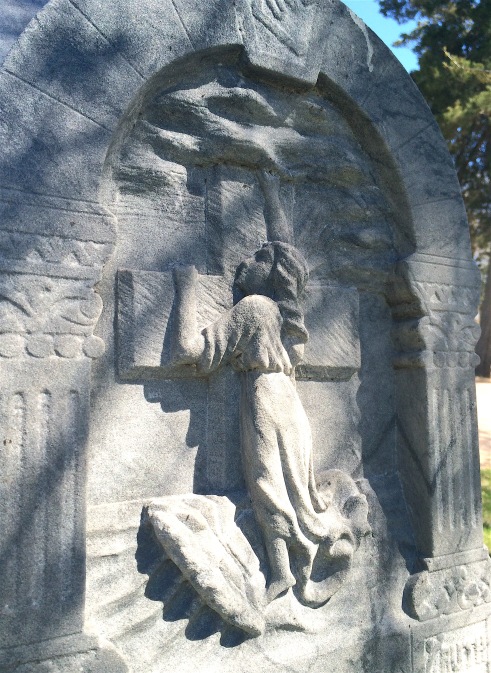 The image of a woman clinging to a cross is often associated with the classic hymn, “Rock of Ages.” A person or soul who is lost in a sea of sin, whose only hope is to cling to Christ’s cross.

There were a few oddly shaped ones as well that I don’t often see, especially the one that looks like an egg. 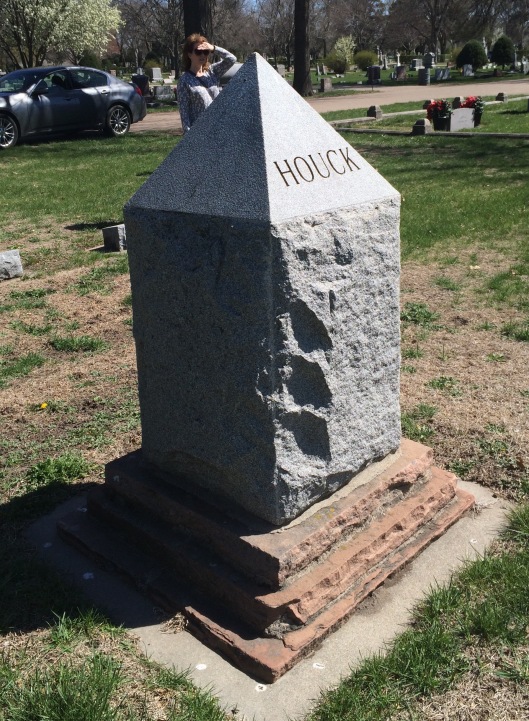 The Houck monument features a pyramid top. That’s Christi in the background. 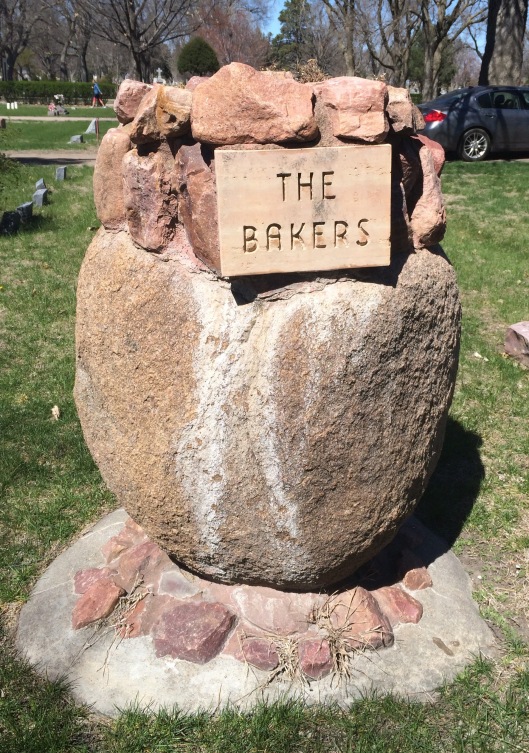 The Baker monument looks almost prehistoric to me for some reason.

The last items I’m going to talk about aren’t monuments or markers at all. These are urns/planters and you can find them in a lot of older cemeteries. Sometimes they are in poor condition, but others stand the test of time pretty well. I could devote an entire blog post to this sub-genre of cemetery architecture by itself.

On the northern half of Grand Island City Cemetery, I found two green urns with some cool carvings on the sides. 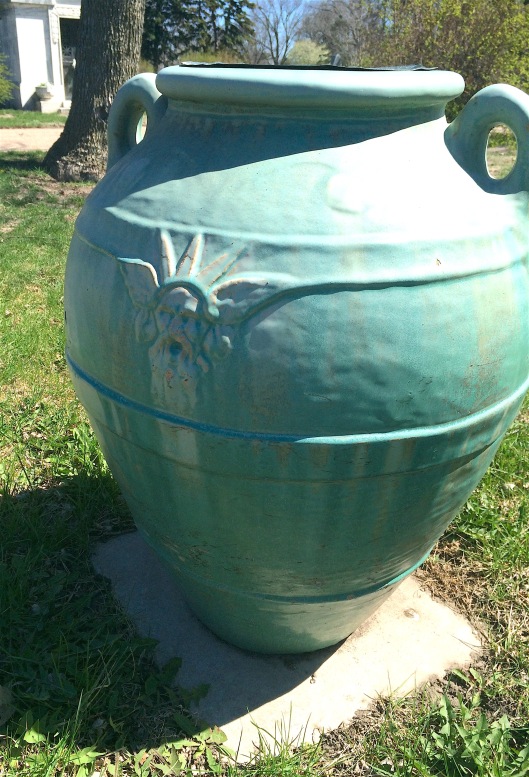 I don’t know what material this urn is made out of or the paint used.

These urns are a total mystery to me. Age, material, symbolism…all of them are a blank. What does the image of a bearded man with wings and a sunburst mean? Is it God? Your guess is as good as mine. But I like them very much. 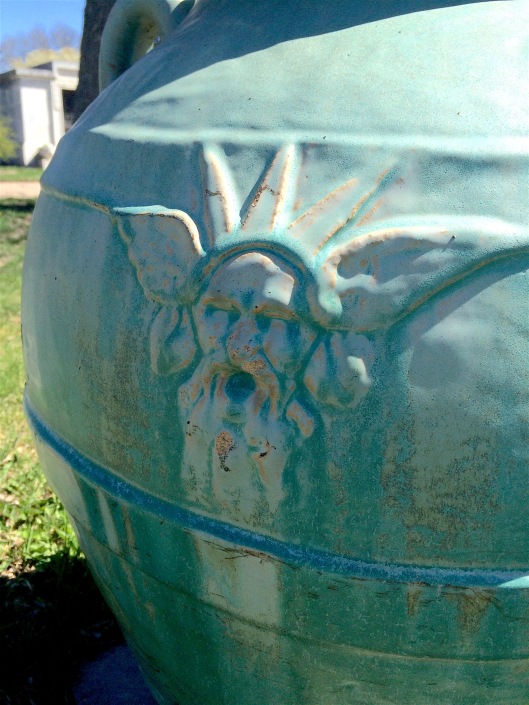 Across the road on the southern half of the cemetery, I found this cast iron planter. I’ve seen a few of these before but had not seen markings on them. This one, while quite rusted, has the maker’s mark on it: C.E. Walbridge, Buffalo, N.Y.

This is a Walbridge & Co. cast iron garden planter, made in the late 1800s. 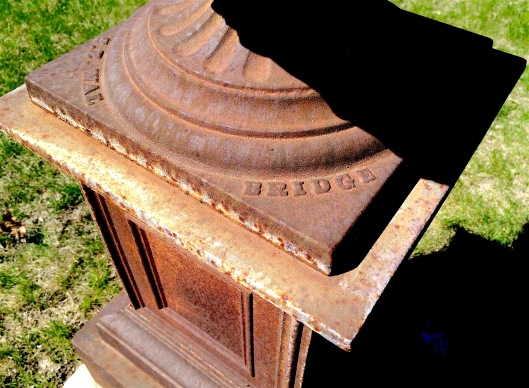 As it turns out, Walbridge & Co. was who you turned to for garden planters and urns in the second half of the 1800s. Charles E. Walbridge, son of a prominent Buffalo, N.Y. businessman, was a Civil War hero who served in the the 100th Regiment New York Volunteers, Co. H. By the war’s end, he was a Lieutenant Colonel. Walbridge returned to working for his former employer at a hardware store in Buffalo before opening one of his own in 1869. His brother, Harry, joined him in the business later. 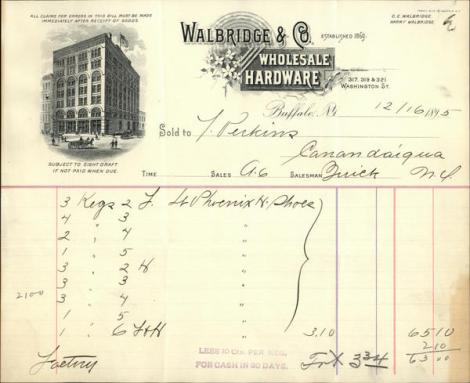 By 1884, Walbridge & Co. was doing well, selling a wide variety of items. I found a picture of a kitchen scale they sold. But what pops up today are garden urns and planters of a wide variety of style and size. They often appear on auction sites or gardening antique specialty stores. I found a lot of pictures of reconditioned and original urns/planters. 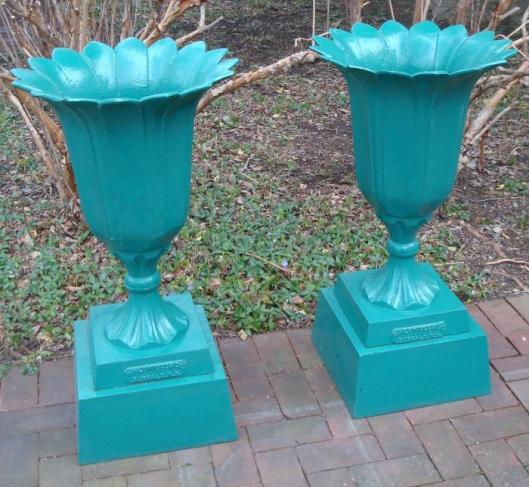 These two Walbridge urns are being sold by Aileen Minor Garden Antiques and Decorative Arts (Centreville, Md.). You can call them to get the price. Photo source: Aileen Minor website.

The cost of such items today is hard to put a figure on. But I found a pair of planters similar to the one at Grand Island City Cemetery (minus the tall stands and in better condition) on a website for $1,495. I found a much more ornate one that sold for $3,000. Someone with more gardening wisdom than myself would have a better idea on today’s pricing. But in the right condition, I imagine they can fetch quite a high price.

I left Grand Island City Cemetery feeling very pleased, as I often do after visiting a cemetery that features styles and items (such as the pergolas) that I’ve not seen before. Such unique finds always make me eager for my next cemetery hopping adventure. 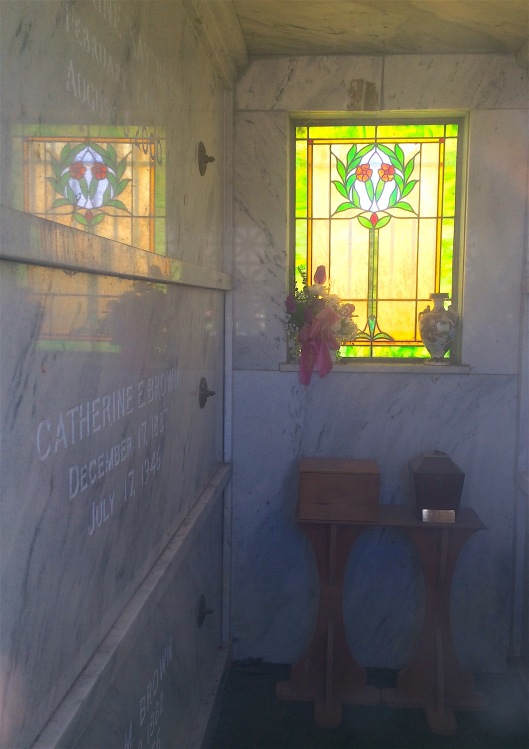 Interior of the Brown family mausoleum.