The back hillside of Wisner Cemetery had some interesting markers I wanted to see. Especially the two white bronze (zinc) markers I noticed.

The white bronze marker for Auguste Nathen is simple but it tells you what you need to know, even if it’s written in German. Auguste was the wife (or “frau”) of Johann Nathen. She was 52 when she died. I’ve seen this particular marker in several other cemeteries, so it must have been a popular model in the Western White Bronze Co. cataglog. 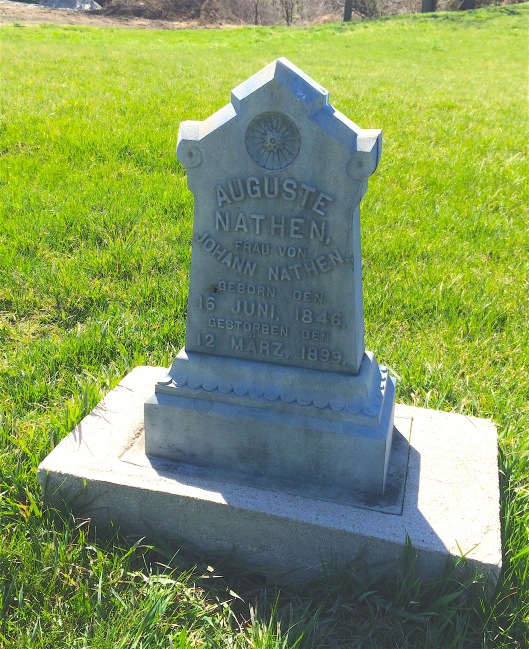 This marker was probably ordered from the Western White Bronze Co. (the closest manufacturer being in Iowa) catalog and shipped to Wisner. A kit showed you how to put it together.

I tried to find out what I could about Auguste but there was only a few ship listings from the right time period from Germany (then called Prussia) and she was alone. So I’m not sure I had the right person.

I suspect she and Johann were German immigrants that came to Nebraska later in their marriage and may have never been included in any censuses taken. There are a few other Nathens listed on census records as living nearby but I could not draw any connection between them and these Nathens.

Not far away is another white bronze marker but this one is much grander and has some lovely symbolism attached to it. I took pictures of it from every angle. 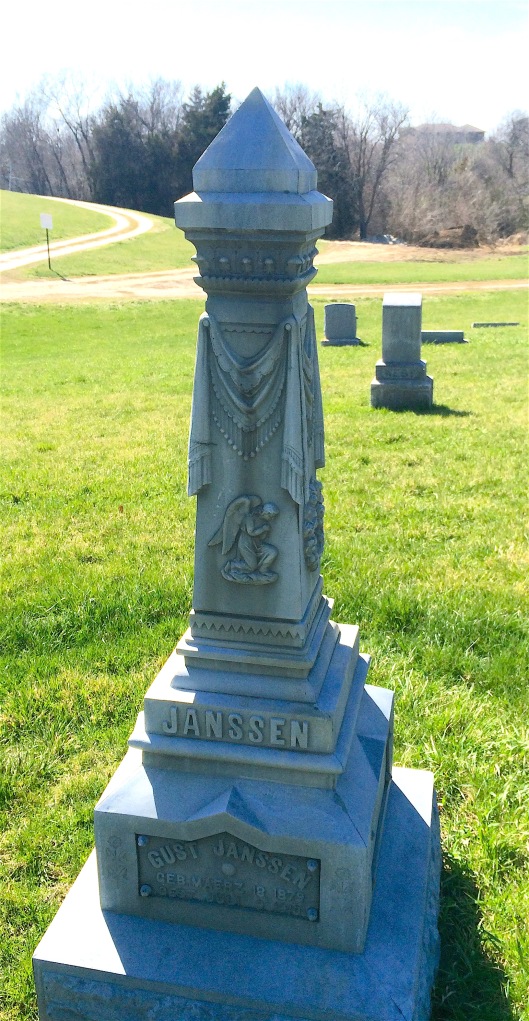 Gust Janssen remains a mystery to me. 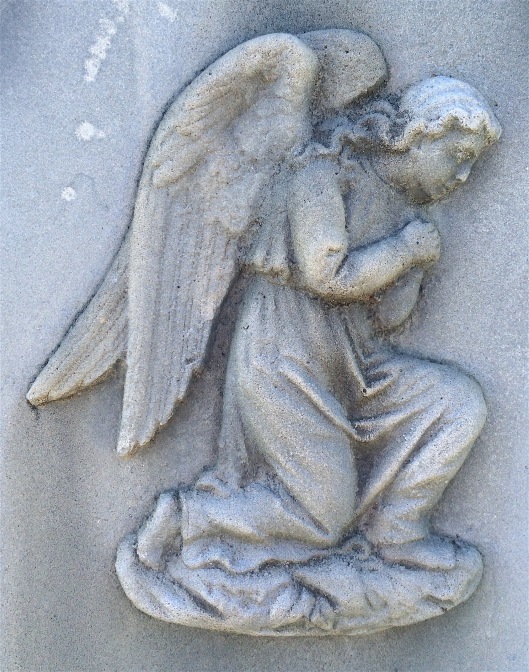 The praying angel motif is common on white bronze monuments. 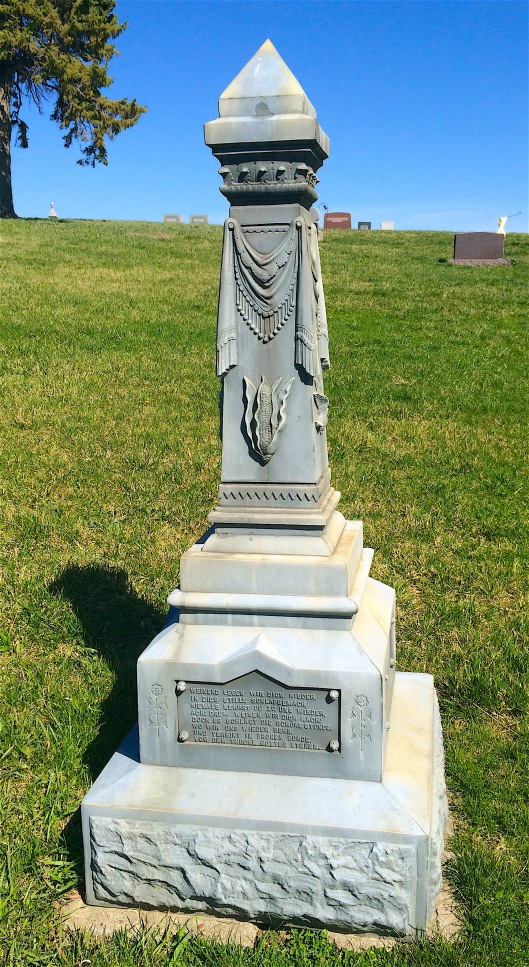 The other side of the Janssen monument features an ear of corn.

I had little success in finding out much about Gust (possibly short for August) Janssen. He was 31 when he died. There are no other Janssens buried at Wisner Cemetery. The sweet inscription on his monument appears to be in German.

I used Google Translate to figure out what the it said:

We lay down, weeping, in this silent sleep.
Never will you return to us again.
Oh, so we are weeping thickly.
But the hour is long, when we meet again
And unite in a happy covenant, before the throne of God.

One panel features a bird in flight, which is symbolic of the “winged soul.” The representation of the soul as a bird goes back to ancient Egypt. Some older burial art features only wings to convey the symbol of divine mission. 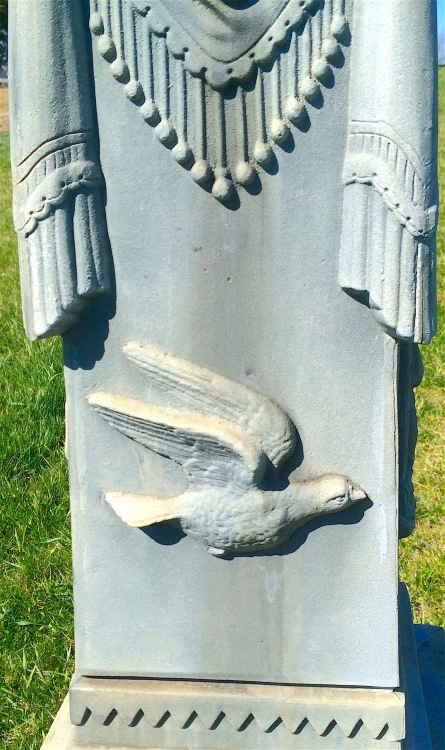 A bird in flight sometimes signifies the death of a child or a young person.

Finding an ear of corn on the side of a white bronze marker was a delightful surprise. I learned that it was a country custom to send a sheaf to relatives on the death of a farmer. Gust Janssen was clearly a farmer.

I was curious to find out just how much corn Nebraska does produce today. According to the USDA National Agricultural Statistics Service in 2012, Nebraska’s corn crop results in $9.1 billion from 9.1 million acres harvested. While Nebraska ranks third among states in overall corn production, it ranks #1 in white corn production.

I’ve seen wheat sheaves on monuments before but not corn.

The monument for Ethel Westerhold is on the same hillside and it’s hard not to stop when you see it. 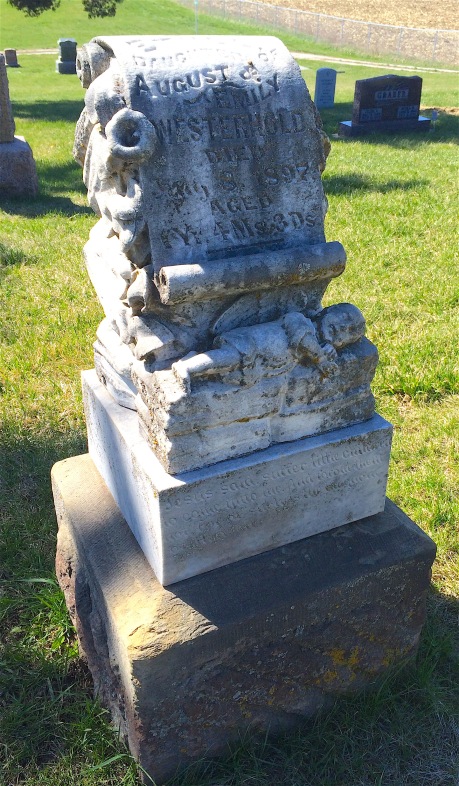 Ethel’s younger sister, Hazel, is buried behind her.

August and Emily Parks Westerhold were both German immigrants who married sometime in the 1890s. Ethel Westerhold was born on March 5, 1896. After only 16 months, she passed away on July 8, 1897.

Little Ethel Westerhold was barely a year old when she died.

August and Emily had a daughter, Hazel, in 1899. Emily died in 1905 and August married Augusta Wieland in 1906. Together they would have four children who survived well into adulthood. Hazel, who is buried behind her sister Ether, married William Goree in 1921. Hazel died in 1924, a day after she gave birth to her son, Harvey.

Back up on the flatter land, I snapped a picture of this monument for Milton B. Fraser. By checking on Ancestry, I found he’d spent almost his entire life in Oneida County, New York. Born in 1818, he married Laura Mason and they had several children before her death in 1861. She was 37 at the time. He married Alzina Mowers a few years later. She was 22 years his junior.

Milton Fraser was in his 60s when he and his family moved to Nebraska.

According to the 1870 U.S. Census, he was listed as a dealer in patents. What did that mean? Apparently, Milton was a cheese expert and applied for several patents involving cheese presses and hoops. I found a book discussing the merits of Fraser Gang Hoops and the Fraser Gang Press. The illustration below details one of his hoops.

Sometime after 1880, Milton and Alzina left Oneida County with their family and headed for Wisner. I’m not sure why. He died only six years later of inflammatory rheumatism. The obituary published in an Oneida newspaper reported he made and sold cheese (with his patented gang cheese press) at a site on Front Street in Wisner.

His obituary also notes his relation to a brother, Dr. C.E. Fraser. I couldn’t find conclusive information about him. But his brother living in Wisner may be why Milton chose to move all the way to Nebraska from the comforts of New York.

Christopher Bowden spent most of his life in England and Mineral Point, Wisc. before moving to Nebraska in the 1880s.

Christopher Bowden and his wife, Elizabeth, emigrated from England to Wisconsin sometime in the late 1840s with their two children. When they moved to Nebraska is unclear, but it was in the 1880s. Their daughter, Elizabeth, died in Wisner in December 1887 at the age of 29. Her marker is broken in two but I had Christi lift it up temporarily so we could photograph it. 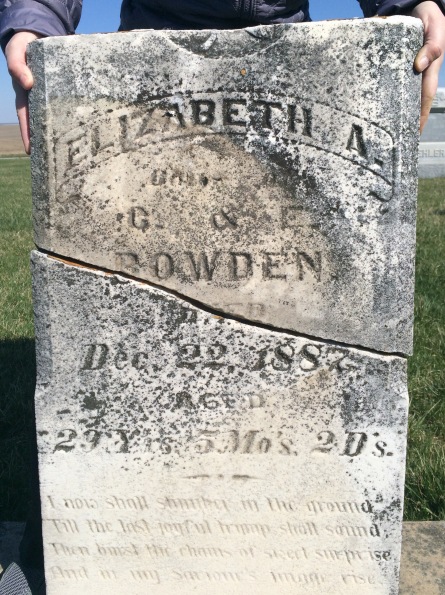 I now shall slumber in the ground
Till the last joyful trump shall sound
Then burst the chains of sweet surprise
And in my Savior’s image rise.

Not far from Christopher’s grave is the monument for one of his sons, Lewis. He married Jennie Sheldon in 1882 in Wisconsin. They had one son (William) before moving to Wisner. This is around the time that I believe his parents moved there and some of his brothers. But by 1887, Lewis had returned to Wisconsin with Jennie, where they had three more children.

According to the 1900 U.S. Census, Lewis is listed as married but working as a farmhand in Plymouth, Wisc., while Jennie and the children are living in Brodhead, Wisc. I believe the couple had separated at this time. He is listed in the 1910 U.S. Census as living back in Nebraska and was divorced, while Jennie remained in Wisconsin, always listed as widowed.

You can see Lewis’ father’s monument right behind his.

Lewis won a prize for his Legal Tender variety of corn at the Lewis and Clark Centennial Exposition of 1905, held in Portland, Ore. During the exposition’s four-month run, it attracted over 1.6 million visitors, and featured exhibits from 21 countries. He also bred short-horn cattle with his bachelor brother, John Edgard Bowden. Their mother, Elizabeth, lived with John in her last years. Brother Francis had success breeding pigs.

Lewis died at the age of 55. I don’t know if he ever saw any of his children again after he returned to Nebraska.

Finally, on our way to the car, I caught sight of this marker. I never knew that Thor was actually a surname before now. But apparently it is!

Marleen Thor died in 2006, but John Thor is still alive.

There’s a rather sad footnote to this post. I learned that a few months after our visit, a man vandalized both Wisner Cemetery and nearby Beamer Cemetery. I’m not sure of the extent of the damage (it looked like it was more destruction of items on the graves and not the actual markers) but the local residents were understandably upset. The culprit only received a ticket for his crimes, I read. I hope he was charged with more than that.

As we headed out of the cemetery, I got a nice picture of one of Nebraska’s many barns. 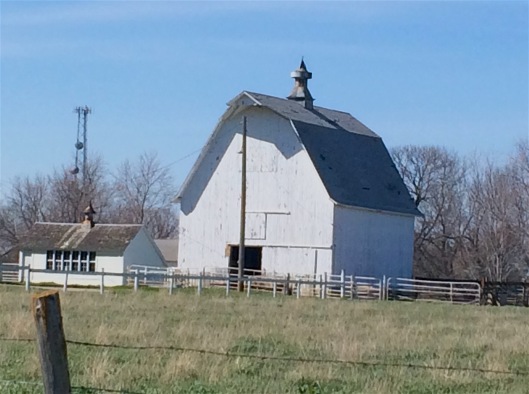 Nebraska has too many cool-looking barns to count.

Then we got back on the road for our last stop, Blair Cemetery, where my very first cemetery “hop” took place some years ago. Where it all began… 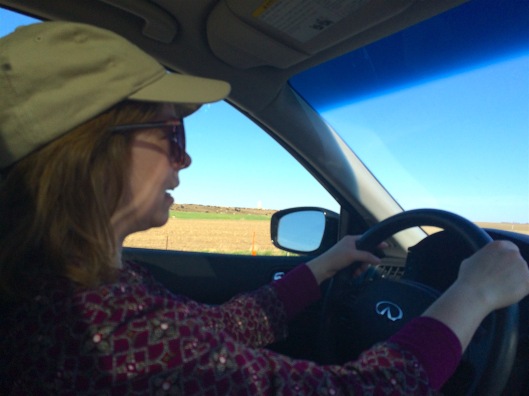 On the road to Blair!