Last week, I focused on some of the more tragic souls buried at Alta Vista Cemetery. To wrap up this series, I’m going to simply share a mix of grave sites with interesting markers and stories. No theme this time!

I like Green Roper’s monument because not only is it a Woodmen of the World tree, it also has a detail (while faded) that few have.

Green Roper’s Woodmen of the World monument has a special feature on it.

A native of South Carolina, Green married Callie Frances Reynolds in October 1888 in Hall County, Ga. During their marriage, they had seven children. Although he came from a farming background, Green spent his life working for the railroad.

The handcar is a faded but signifies Green Roper’s dedication to his job.

Thanks to Ancestry, I located Green’s will. It was drawn up in July 1919, only a handful of months before his death in December. Was Green ill at the time, wanting to provide for his family in the event he died?

Green owned a home on Gainesville’s East Spring Street and a 290-acre farm in the “Tom Bell District of Hall County on the Chattahoochee River”. He left it all to Callie and his children, along with a life insurance policy. I’m guessing it was with Woodmen of the World, who may have provided the marker.

Benjamin Perry “B.P.” Byrd was a native of South Carolina as well but spent most of his life in Gainesville and Athens. He was likely related to Green Roper in some way because B.P.’s mother was a Roper. He married Maggie Roper in December 1895. From what I could tell, B.P and Maggie had two children.

B.P. Byrd was a member of the Brotherhood of Locomotive Engineers, Lodge 696. The “GM” inscribed on the locomotive below the two small windows stands for the Gainesville Midland Railroad. 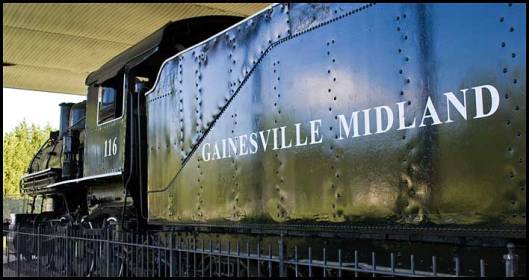 Locomotive No. 116 of the Gainesville Midland Railroad is on display in Jefferson, Ga. near the city’s high school. It was built in 1907 by the Baldwin Locomotive Works in Philadelphia, Pa.

In 1906, the GM constructed a extension south from Jefferson to a connection with the Seaboard Air Line (SAL) two miles west of Athens at Fowler Junction. From there, GM trains continued to Athens through a trackage rights agreement with SAL. Business directories list B.P. and his family living in the Athens/Monroe area at that time.

A curious marker at Alta Vista got my attention. Beside his military marker, Cooper Scott also has a stone stating that (according to his obituary) he fired the first cannon at Fort Sumter in Charleston, S.C. at the start of the Civil War.

Cooper B. Scott, who fought with the First South Carolina Infantry, Company G (Butler’s First Regulars), during the Civil War.

I learned that several people have claimed this distinction over the years. But it appears that many of Cooper’s friends, war comrades and family believed it.

Scott’s grand daughter said in an article, “When Cooper fired the cannon, he did so because he saw ‘movement’ at Fort Sumter. He was immediately thrown into the brig for opening fire without an order. He was released the next morning when the Union soldiers surrendered.”

According to the application for a military marker for Scott in the 1940s from the Gainesville chapter of the United Daughter of the Confederacy, Scott was not only a corporal with the First South Carolina Infantry but also the musician of the regiment.

I think one of the saddest markers I’ve ever encountered was the for the one for “Crippled” Jim Smith. 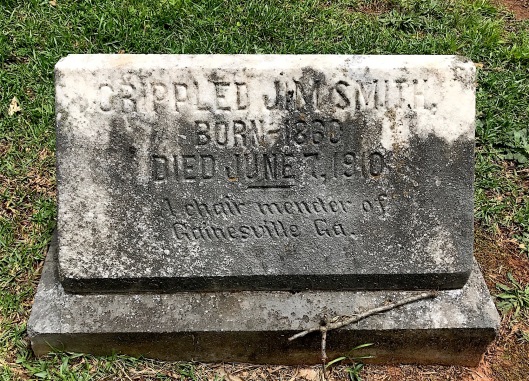 Jim Smith was a beloved member of the Gainesville community.

The only information I could find about Jim Smith was from a Gainesville Times newspaper clipping that someone had posted on his Find a Grave memorial page. Nothing about his parents or family was included.

Altlhough Jim was born disabled, that didn’t prevent him from working hard to earn a living by repairing broken chairs that needed the seats redone. The clipping noted that he had been in poor health the last year of his life. It’s possible that his customers paid for his gravesite and humble marker.

I can’t respectfully finish this series about Alta Vista Cemetery without featuring the man that left his mark on Gainesville in ways still being felt today.

Born in Gainesville in 1902, Jesse Dickson Jewell was the son of a feed store owner (who died when Jesse was 7) and an art teacher. After graduating from Gainesville High School, Jewell studied civil engineering at Georgia Tech and the University of Alabama. In 1922, he began working in the family feed business, along with his mother and stepfather, Leonard Loudermilk. In 1928, Jesse married Anna Lou Dorough.

When Loudermilk died in 1930, Jewell took over the family business. As the Great Depression hammered the country, he tried a new approach to boost feed sales. He bought baby chicks and supplied them (along with chicken feed) on credit to cash-poor farmers. After the chicks were grown, Jesse bought them back at a price that covered feed costs and guaranteed farmers a profit. As a result, more Hall County farmers chose to contract to grow chickens for Jesse.

By the late 1930s, Jesse was adding the elements that would make J. D. Jewell, Inc. the largest integrated chicken producer in the world. In 1940, he opened his own hatchery and then a processing plant in 1941. By 1954, Jesse had added his own feed mill and rendering plant. This vertically integrated corporation set the standard for poultry processors everywhere, as did Jewell’s trademark frozen chicken.

In the early 1960s, Jesse sold his company and it went bankrupt in 1972 (although Jewell himself did not). With his poultry fortune, Jesse established a scholarship fund at Brenau College, where he also endowed a new building for biology and home economics. 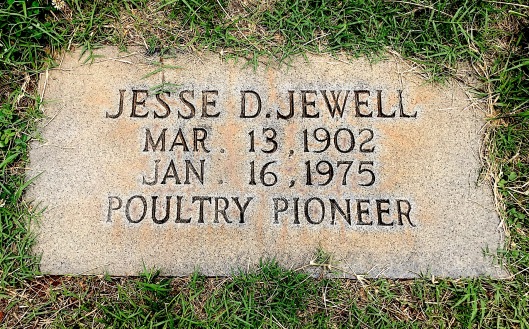 Jesse Jewell left behind a business legacy that is still making an impact today.

Jesse Jewell suffered a stroke in 1962 and died, after an extended illness, on January 16, 1975. His wife, Anna Lou, died in 2001 at the age of 101. She is buried beside him.
As we say farewell at Alta Vista Cemetery, I highly recommend downloading this walking tour map that highlights many of the monuments I featured over the last few weeks should you ever visit the place yourself. It was an incredibly helpful tool to me while I was there. 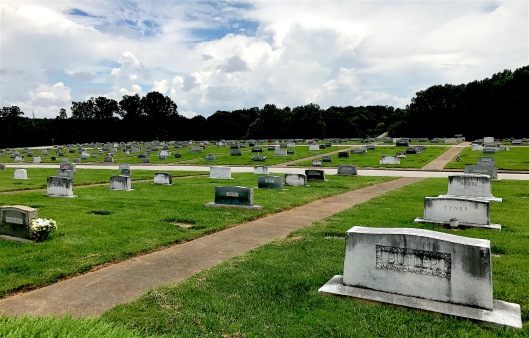 Alta Vista Cemetery is well worth more than one visit.

Over the next weeks, I’ll be sharing my visits to cemeteries in South Carolina, Maine, and Iowa. I hope you can come “hop” with me on these new adventures!