Having spent the last several years cemetery hopping, I’ve visited more final resting places than I can count. The pictures pile up over time and sometimes I forget the names of some of them.

In 2015, my family visited Chicago for our summer vacation and to attend a wedding. I wrote about several of the cemeteries (Rose Hill, Bohemian, Graceland) I visited. But as I went through those photos recently, I realized I’d overlooked a few small ones I went to on that trip.

Big cemeteries are great. Writing a multi-part series is a challenge I relish. But what about the small neighborhood cemeteries we drive past every day? Those are much more common. And yet we often ignore them.

My mother-in-law, Sue, grew up in Roselle, Ill. It’s a bustling Northwestern suburb of Chicago. But it began as a village settled by German immigrants in the 1800s. My in-laws moved to Knoxville, Tenn. in the 1970s, but the rest of the my husband’s relatives still live in the Chicago area.

Oddly enough, I visited Roselle to be a bridesmaid in a college friend’s wedding back in 1990. I had no idea that I’d return there several years later. 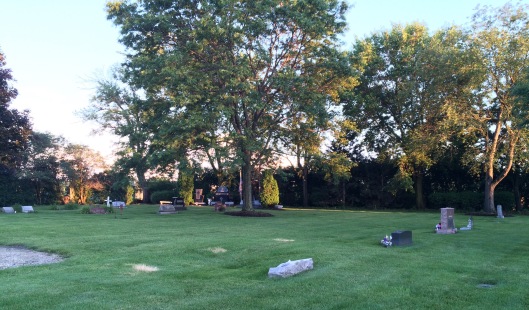 Trinity Lutheran Cemetery is not big or grand but it’s special to the families with loved ones buried there.

Trinity Lutheran Cemetery is situated on busy West Irving Park Road. Blink and you’ll miss it. There are only about 300 marked graves there and plenty of room exists for future burials. But it is well cared for and is a quiet haven amid the suburban rush.

We visited Trinity Lutheran Cemetery around dusk. This cross is in one corner of it.

I didn’t photograph a lot of the cemetery. There were a few Find a Grave photo requests and locating those graves was easy. Sometimes it’s more important to walk around and simply soak in the quiet of a cemetery than take a lot of pictures.

I did notice the grave of Joseph Mastny. Only one date is on it, indicating he died the same day he was born. Several figures of cherubs surround his stone, including a little boy carrying a golf bag with a dog. It tells me his family has not forgotten him and still visits when they can. 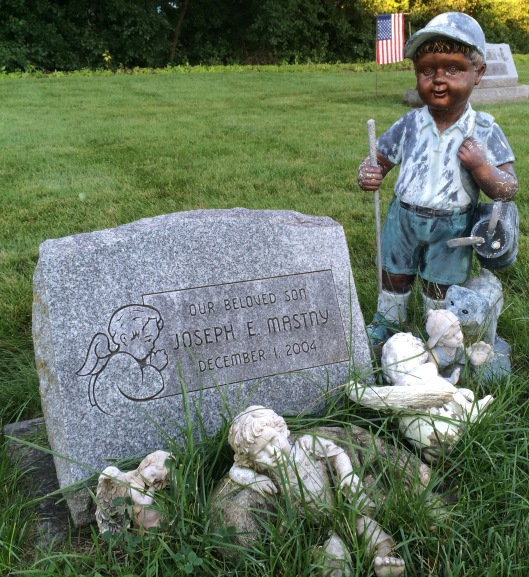 Joseph Mastny’s grave appears to be much loved.

Something moved me to photograph the gravestone of Dee Hildebrandt. I think it was the fact she was only 22 when she died. Those who die so young always move me, for reasons I can’t explain.

Dee Hildebrandt was unknown to me when I photographed her stone.

Later that week, I mentioned to my husband’s Aunt Beth that we’d visited Trinity Lutheran Cemetery. When I told her about seeing Dee’s grave, she knew who it was at once. Beth went to school with Dee and remembered her fondly. Dee died in a car accident in 1982. I think this is the first time I’d ever photographed a grave only to have someone tell me later they knew the deceased personally.

I mentioned earlier that Roselle was settled by German immigrants. One of them was J. Henry Hattendorf. I didn’t know anything about him when I visited this cemetery but his name was on a unique bench that I photographed. He played a major role in the history of Roselle and Trinity Lutheran Cemetery.

I’ve seen these tree-style benches in a number of cemeteries. The motif was much beloved at one time. But this is one of the few I’ve encountered that has a person’s name on it.

Brothers Henry and John C. Hattendorft were born in Illinois but their parents Henry Hattendorf and Maria Gervecke Hattendorf were among the German immigrants that came to the area in the 1840s. They farmed with their father in nearby Schaumburg until the railroad came to Roselle. The Hattendorf brothers knew that would bring new business opportunities and wanted to be a part of it.

Henry partnered with John Bagge in 1880 to buy out the stock of Roselle Hough’s general store. The city of Roselle was named after Hough. The men also maintained a post office with Henry acting as Roselle’s postmaster. They operated the McCormick farm machinery franchise at Chicago Street and Prospect, selling a variety of items from farm implements to kerosene to furniture.

They also claimed they sold “everything from cradle to grave, including coffins to undertaking services.” This was not unusual during this era, when funeral hones were not common.

The Hattendorf families, along with others, were keen to start a Lutheran school for their children to attend. They helped establish Roselle’s Lutheran School in 1899, located at Prospect and Elm. Later in 1910, many of the same families would establish Trinity Lutheran Church.

J. Henry Hattendorf (pictured on the far left) was one of several families that started Trinity Lutheran Church in 1910. This photo was taken in 1935. Photo source: Trinity Lutheran 75th Anniversary Book

In June 1902, Henry dissolved his partnership with Bagge and took over the business. He and four directors applied for and received a charter from the State of Illinois to open the Roselle State Bank in 1903. It later became Harris Bank Roselle, another long-standing business in the town.

Henry donated the land on which Trinity Lutheran Cemetery was established in 1911. The first burial, in 1912, was for William Benhart. His was one of the few monuments I photographed during my visit. He was in his 40s when he died of blood poisoning following an appendectomy. He and his wife, Lena, operated a tavern in Roselle.

William Benhart was the first burial at Trinity Lutheran Cemetery in 1912.

In the 1920s, Henry operated a clothing store on the corner of Prospect and Irving Park Road. On Feb. 8, 1920, a train derailed and sent over 20 train cars in all directions. One of those cars hit the corner of Hattendorf’s store, dumping a full load of grain into the basement. 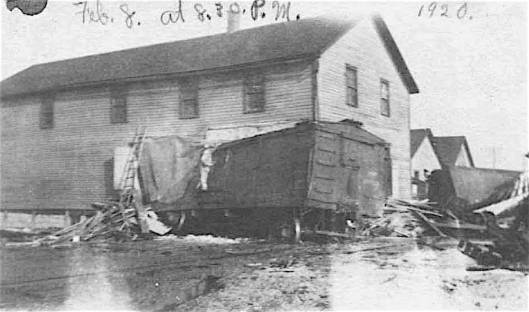 Henry and his family lived in a fine home close by the bank. The estate is said to have had a winery in the basement. 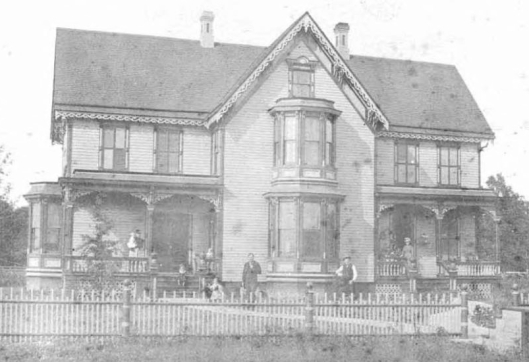 Built in 1890, the Hattendorf family home had a winery in the basement. Henry and his brother, John, are in front of the house. Photo source: Roselle History Museum

Sadly, the Hattendorf house was demolished to make room for more parking for the Roselle State Bank in the 1960s. However, the accompanying coach house was saved and moved to 39 Elm Street. It now serves as the offices of the Roselle Historical Foundation.

Henry married Dora Meyer in June 1878 and the following year, their eldest daughter Alvina was born. I photographed Alvina’s grave, which is beside her parents’ graves. Dora died in 1934 and Henry died in 1942.

I learned later that Alvina married Henry Langhorst in 1907. He was part of a similarly prosperous merchant family in Palatine, Ill. They would have one daughter, Mildred. Sadly, their marriage ended tragically in 1910. 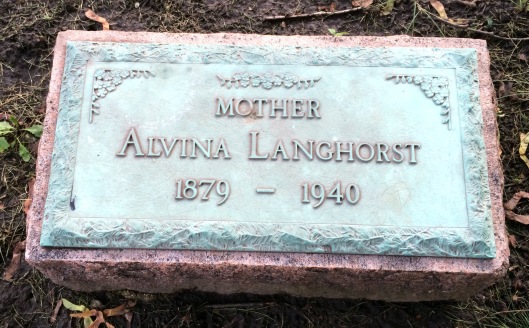 Looking up Henry’s Find a Grave memorial, I learned that he and another man, William Mess, were working on a barn together on a farm in Palatine. Jack screws had been placed around the barn but none in the center where Henry happened to be. The weight of the building caused the center beam to give way and the barn collapsed on top of Henry. He was killed instantly. William Mess, located at one of the corners, barely survived but died a few days later.

According to his obituary, the Palatine Lutheran Church where Henry’s funeral was held could not hold all of the mourners that came. It also stated, “He was loved and respected, not in his own set alone, but by all people.” He is buried with his family at Union Cemetery in Palatine, Ill.

Alvina and Mildred went to live with her parents after Henry died. Alvina never remarried and died in 1940. Mildred married contractor Charles Rees in 1929. She died in 1993.

We probably spent maybe 30 minutes total at Trinity Lutheran Church Cemetery but I was glad we did. It isn’t very big. And there are no stunning monuments to photograph. But it’s a prime example of the kind of cemetery that exists everywhere. They are special to the families with loved ones buried there who come to honor their memories.

And that’s a good enough reason for me to stop, too. 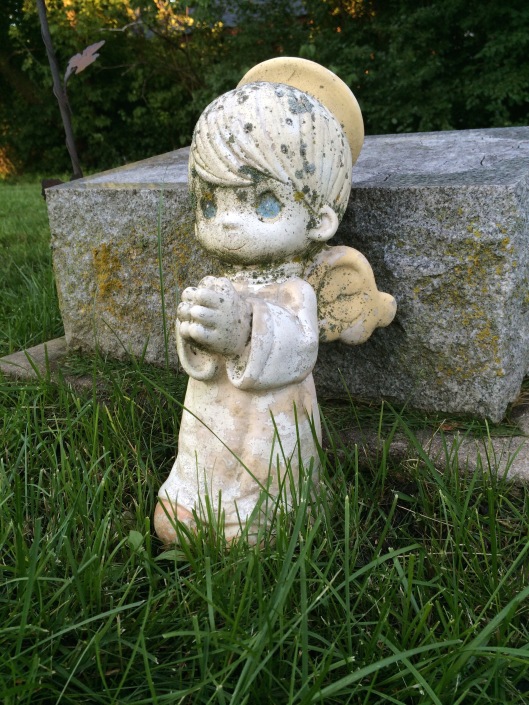