Charleston, S.C. is a wonderful city filled with historic cemeteries and I’ve seen the majority of them. However, last summer I was eager to venture out a bit from my usual stomping grounds and check out the surrounding areas like Edisto Island.

I already knew there are many small family cemeteries secreted away deep in swamps, forests and old plantations. However, they’re also mostly on private land and the owners don’t welcome uninvited guests. So I ended up going to the bigger church ones, which were certainly amazing in their own right.

One of the signs I saw when I drove onto Edisto Island.

The Edistow (that’s how they spelled it) Indians were living on the island when Spanish Jesuits established a mission there in the 1500s but abandoned it within the year. Those Indians were all but gone by 1750 due to displacement and disease.

English Lord Proprietors who held dominion over North and South Carolina purchased land from Indians, then granted land on Edisto and other islands for planting rice. The Paul Grimball family (at Point of Pines) were the first Europeans to live on Edisto in 1683. Spanish pirates destroyed the Grimball house in 1686, but its ruins remain.

During the 1700s, South Carolina, including Edisto, exported record amounts of rice to Europe and Caribbean buyers. For a short period they exported indigo, too. During the Revolutionary War, most planters fled to the mainland. The British destroyed property and sold many slaves to the West Indies. In 1785, Edisto began growing long-staple cotton from seeds locally developed.

I did make a stop at the Geechie Boy Market and Grocery Store, having heard that their doughnuts were pretty tasty. The Johnsman family has operated a mill on their local farm since 2007, selling hand-milled grits, corn meal and other grains. And by the way, those doughnuts lived up to their reputation. Delicious!

Stopping for doughnuts at the Geechie Boy Market and Mill is a must. So is sitting in their giant red Adirondack chair!

Not far down the road you’ll find the Presbyterian Church on Edisto (PCE) and its graveyard. The congregation is thought to have started meeting in the 1680s, but the first official pastor was not installed until 1704 with the Rev. John McLeod, a Scottish native. The current church was built in 1830, with updates and renovations over the years. 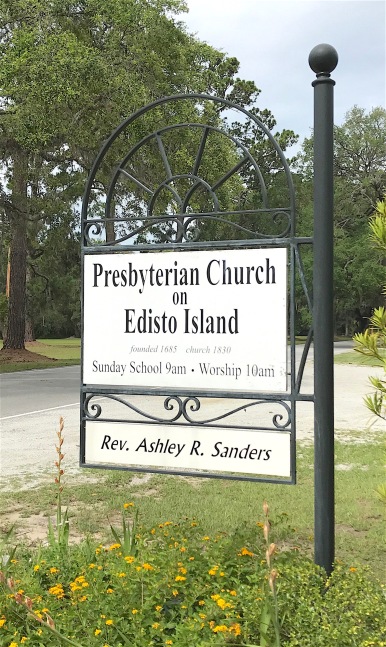 The Presbyterian Church’s current building dates from 1830. But the graveyard has burials as early as the 1780s.

By 1860, Edisto’s slave population of about 5,000 made possible local prosperity from sea island cotton. Wealthy planters built antebellum homes on the island and some of them were members at the church. But all that changed when the Civil War started.

With the fall of Port Royal in 1861, white residents of Edisto evacuated under orders from the Confederate government. Union troops soon occupied Edisto and remained for many years. Black residents also remained. Those who were members of the church came down out of the balcony, then elected a session and pastor while continuing the worship of God.

The Presbyterian Church on Edisto currently has a membership of about 150.

Two years after the war’s close, Dr. William States Lee (the church’s pastor since 1821) and several white members got a writ from the occupying Federal government returning the church sanctuary and grounds to the white members. The black members went down the road and founded the Edisto Presbyterian Church. According to church literature, Dr. Lee wrote that the event was peaceful while others remembered it as very tense. Today, both congregations are members of Charleston-Atlantic Presbytery of the Presbyterian Church (U.S.A.)

The graveyard that surrounds the church dates back to the 1770s and boasts a wide variety of monuments and markers. Some of are very worn and difficult to read. The grandest ones representing the wealthier church members are around back and closest to the church itself. 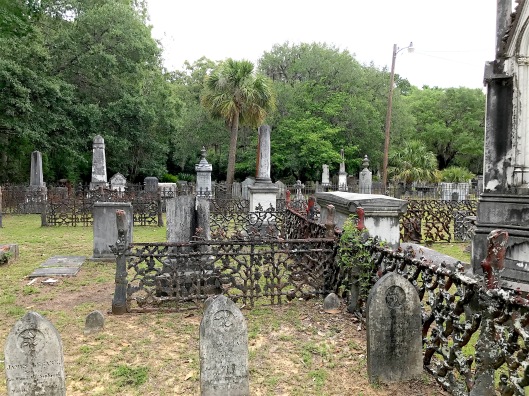 Names like Seabrook, Mikell, Whaley and Eding can be seen in the graveyard.

Near the front is a memorial to those who perished in the June 14, 1838 wreck of the Steamboat Pulaski. Eight church members, including pastor Rev. James Joseph Murray and his family, were among the victims. A total of 130 passengers and crew died in the tragedy. The death toll was said to have been the greatest suffered to that point by a steam-powered vessel. 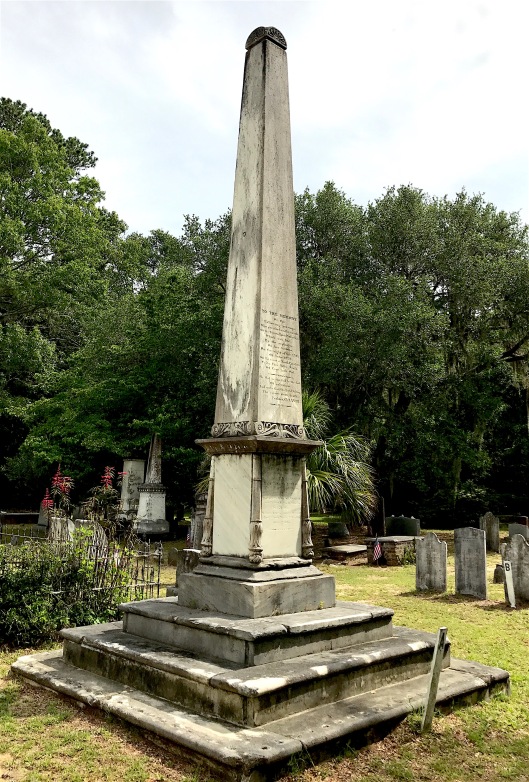 When the Pulaski’s boiler blew up, the explosion swept some passengers into the sea and scalded others to death.

The Pulaski (bound for Baltimore) left Savannah on June 13, 1838, and arrived in Charleston later that day. After taking on passengers in Charleston the following day, it headed north with nearly 190 passengers and crew.

At around 11 p.m. on June 14, one of the Pulaski’s boilers exploded. The explosion blew off the ship’s promenade deck, according to an account published by survivor Rebecca Lamar in 1854. “At the same time the bulkhead between the boilers and forward cabin was stove in, the stairway to it blocked up, and the bar-room swept away,” she recalled.

The explosion swept some passengers into the sea and scalded others to death. Irreparably damaged, after 45 minutes it split in two with a crash. Shortly after, both halves sank.

The Pulaski left Savannah on June 13, 1838, and arrived in Charleston later that day. After taking on passengers in Charleston the following day, it headed north with nearly 190 passengers and crew. (Photo source: The Cotton Boll Conspiracy Web site)

Several dozen passengers and crew survived the explosion and found themselves in the water as the ship sank, either in lifeboats or floating amid debris. Two of the lifeboats started rowing for the North Carolina shore. But other survivors aboard a third lifeboat and a raft were unaware others had made for the coast and spent several days at sea.

Eight church members died when the Pulaski went down. A total of about 60 people survived among the 190 passengers and crew on board.

Over the next few days, several in the second group would succumb to injuries, exhaustion or thirst before the schooner Henry Camerdon, headed to Wilmington, N.C., came upon the survivors and rescued them.

An inquiry concluded that the engineers had improperly operated the boilers on the ship, causing the explosion. Gradually, public opinion led Congress to pass regulations that governed steamer inspections. The tragedy soon faded from memory, except for those whose families were touched forever by it.

Two of the victims that were church members were Sarah Ann Mikell Edings (27) and her daughter, Sarah Josephine (5). She left behind husband William Edings and their children. She and her daughter’s bodies were never recovered. 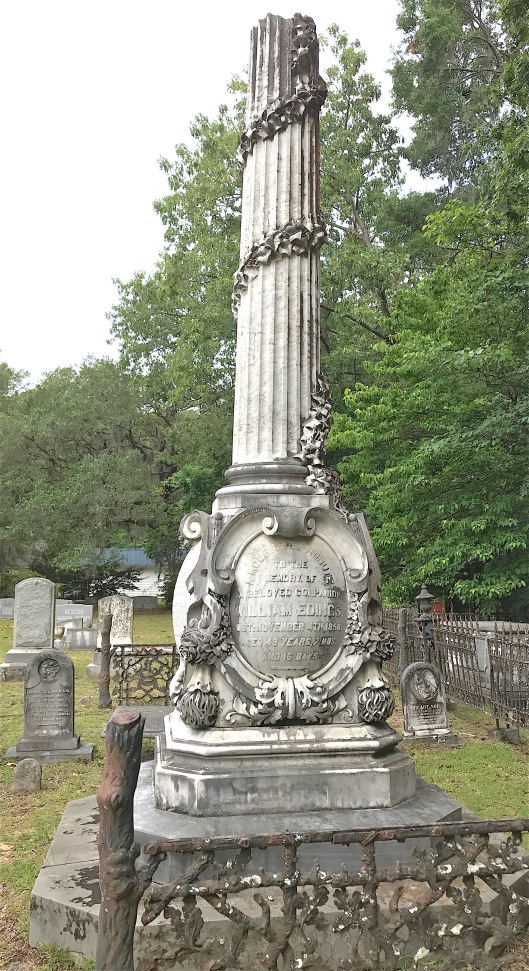 A prosperous planter, William Edings’ first wife died in the Steamboat Pulaski tragedy. The Edings family had deep roots on Edisto, the resort village of Edingsville Beach having been named after them.

In the back of the graveyard is the elaborate monument for William Edings, a prosperous planter.  After the death of his wife and child, William married the widow Hess Marion Waring Smith Mikell in 1844. She had three sons of her own. She and William would have several children together, a number of whom died in childhood and are buried beside William. He died in 1858 at the age of 49.

I believe the famous Charleston stone carver William T. White created William’s grand monument, a column cut off at the top to signify a life cut short. I didn’t see his name on it but White’s name does appear at the bottom of his sons’ markers located behind his in the plot. 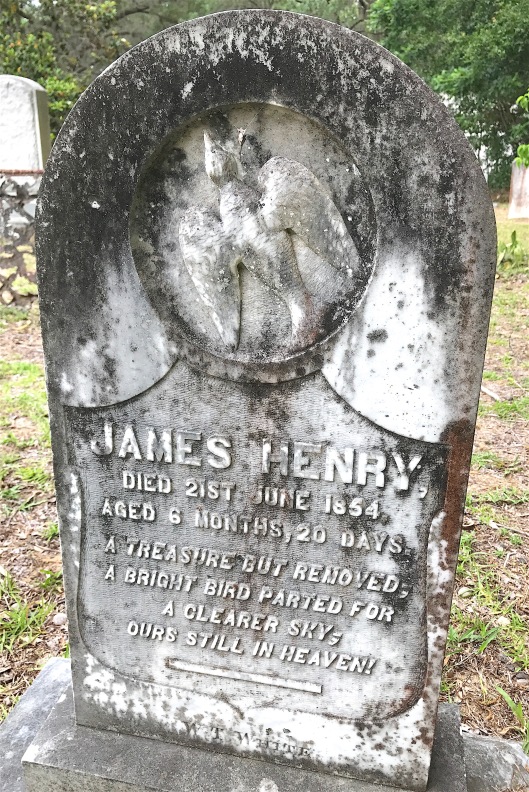 “A bright bird parted for a clearer sky”…

Buried beside these are two other children, William Seabrook Edings and Horace Waring Edings, both of them slab markers done by White. Son William Smith Edings lived to adulthood and is buried in the family plot. 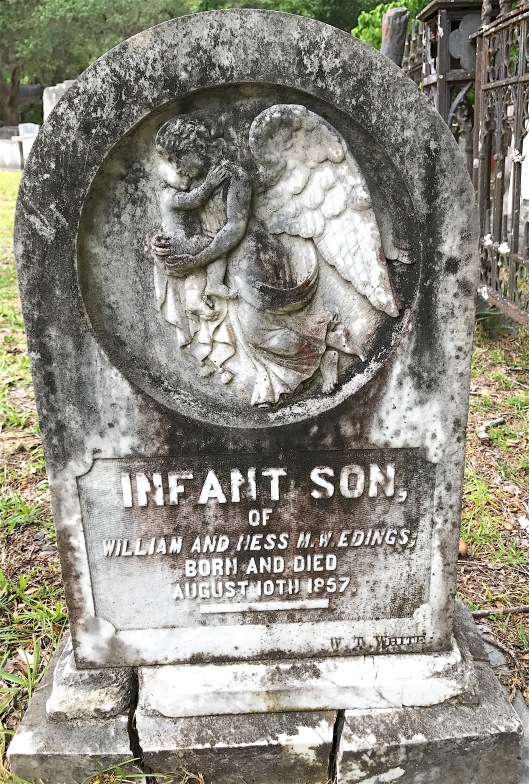 The detail of the angel bearing aloft a child is quite intricate. Not surprising considering who carved it. I have seen this motif often on Southern grave stones, but this example is one of the best.

Hess struggled after William’s death and the ensuing Civil War. She fought to get a certificate of ownership of the family’s land on Bayfield Plantation after the war, and was only able to do so by sending a desperate letter to a general who helped her. After receiving the certificate in May 1865, she was about to support her family with crops raised on the plantation despite the fact the family home was burned. 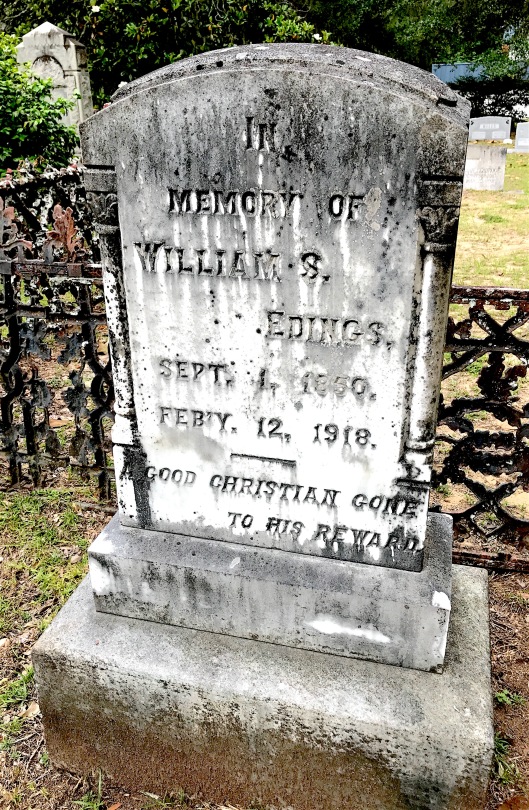 William S. Edings was only eight years old when his father died. But he eventually took over running the family plantation with his brother David.

From census records, it appears she lived on Edisto with a maiden daughter (Juliet) and two of her bachelor sons (William and David, who ran the place). The 1900 U.S. Census sadly noted that of the 12 children she had given birth to, only three were still alive. She died in 1906 but her burial site is unknown. William and sister Juliet shared a home until his sudden death from a heart problem in 1918. He is buried at PCE in the Edings plot. David and Juliet’s death dates and burial sites are unknown.

Next time, I’ll be back with the “ghost story” of Julia Legare. There’s a lot of misinformation floating around about her, but she was a real person who is indeed buried in the PCE graveyard. 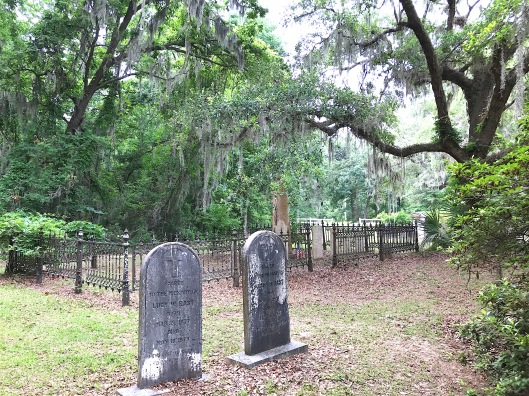