Today’s blog post might make some of you feel angry or disappointed. I expect some grumpy comments. That’s because I’m going to debunk a beloved ghost story that many people swear is true.

Don’t get me wrong, I love a suspenseful old yarn. Who doesn’t? The haunting tale of Julia Lagare is one of them. But when it flies in the face of actual facts, I can’t let it go unchallenged.

Before I start, many thanks to J’aime Rubio’s web page “Stories of the Forgotten”. She did a ton of research on this story and I’m going to be sharing some of it with you here. If you click on the link, you can get more details.

This grand iron archway features a tree branch/leaf motif, created by the Robert Wood Ornamental Ironworks of Philadelphia, Pa. You can see the reddish-colored Legare mausoleum in the back of the lot.

One of the reasons crowds flock to the Presbyterian Church on Edisto’s (PCE’s) historic graveyard is in the lone mausoleum located in the very back. Across the entrance is the name “Legare” (pronounced “La-gree”). There are three people interred inside. There is no door on the mausoleum, but a wooden lattice-type frame to keep people from going inside while enabling them to view the contents.

In the 1850s, a child or pre-teen girl by the name of Julia Legare was visiting family on the island when she fell ill from diphtheria and went into a deep coma. Her family, thinking she was dead, held a funeral then placed her body inside the family mausoleum at PCE’s graveyard. They left her there, shutting the door behind them.

The legend states that some 15 years later (some versions say seven) when her brother died, the family opened the mausoleum to place his remains inside. To their shock and horror, Julia’s bones were found right beside the door. Several accounts state they found scratch marks on the walls and door indicating Julia had awoken from her coma and fought without success to get out of the mausoleum.

Ever since, her spirit has haunted the cemetery. The legend also says that despite the fact people would shut the door to the mausoleum, it would be open the next day. So they took it off permanently and placed it in the woods

This tragic tale continues to get printed in tourist brochures and on web sites. The problem is that it isn’t true.

Designed by James Hoban, Seabrook House was where Julia grew up. It was built in 1810 under the direction of her father William. (Photo source: Charlotte Huston Webb’s web site Charleston Through an Artist’s Eye)

Born on Nov. 19, 1829, Julia Georgiana Seabrook’s parents were William Seabrook and his second wife, Elizabeth Emma Edings. William’s parents were John Seabrook and Sarah Lawton Seabrook. William was quite successful at managing his mother’s estates and is thought to be one of  the first plantation owners to cultivate Sea Island cotton (or black seed) successfully. In addition, William owned and operated the Edisto Island Ferry that carried passengers between Charleston and Savannah (in addition to other island areas).

Julia grew up on her father’s plantation, playing in the rooms of the elegant William Seabrook House that still stands today. William chose the designer of the White House, James Hoban, to draw up the plans. The home was built during his first marriage in 1810. Julia was his youngest child with second wife, Elizabeth.

Unlike other plantation homes that burned during the Civil War, the Seabrook House is still standing because it was used as a provost and headquarters for the Union Army. I last read the fully renovated home, situated on 350 picturesque acres, was for sale in March 2017 for $8.5 million.

There is no door on the Legare mausoleum. It was not inside of it, nor did I see it in the woods. So I couldn’t testify to any scratch marks the legend swears are on it.

Julia was about 18 when she married plantation owner John Berwick Legare in 1848. Soon after, Julia gave birth to their son, Hugh. Little Joseph came soon after. They were all living together in 1850, according to census records. The cause of her death is unknown, but Julia died at the age of 22 on April 15, 1852 (which is inscribed on her marker). She was the first person interred in the Legare mausoleum.

There is no door on the mausoleum so I cannot testify to any scratch marks the legend refers to. I couldn’t see anything resembling scratches on the walls, just the expected aging. I imagine that so many people wanted to see inside over the years, the church gave up and left the door off (which may have been scratched up by tourists themselves). The wooden frame keeps people out while letting you get a good look inside and take pictures.

The inside of the Legare mausoleum as it looks today. Julia’s stone is in the middle and she is flanked by her husband and her oldest son.

The idea that the Seabrooks simply left Julia’s remains inside the mausoleum is hard to swallow. There’s not much room in there. Most of the time, the casket is slid into a hole in the wall that is sealed or buried beneath the mausoleum floor and then covered by stone. The casket wouldn’t simply be left in the open. So the notion that her bones were found by the door doesn’t make any sense.

This is the closest I could get to the stones.

You’ll notice that this is the Legare mausoleum. Not the Seabrook mausoleum. Her 31-year-old brother, Robert Chisholm Seabrook, died only six months after Julia. Not 15 years later as the legend states. So they wouldn’t have opened the mausoleum to inter him there. He is buried near the mausoleum with his own towering monument that was put up by their mother. It’s the tallest one in the cemetery.

Robert Chisholm Seabrook, Julia’s brother, was 31 at the time of his death.

Robert Seabrook’s monument is the tallest one in the cemetery.

William Seabrook died in 1836 and is buried in the Whaley-Seabrook Cemetery on the Seabrook House grounds (described on Find a Grave as being in very poor condition) on Edisto Island with his parents and first wife, Mary Ann Mikell Seabrook. His second wife, Elizabeth, died in 1856 and is buried in the PCE graveyard near Richard and a daughter, Mary, who died in 1834 at the age of three. 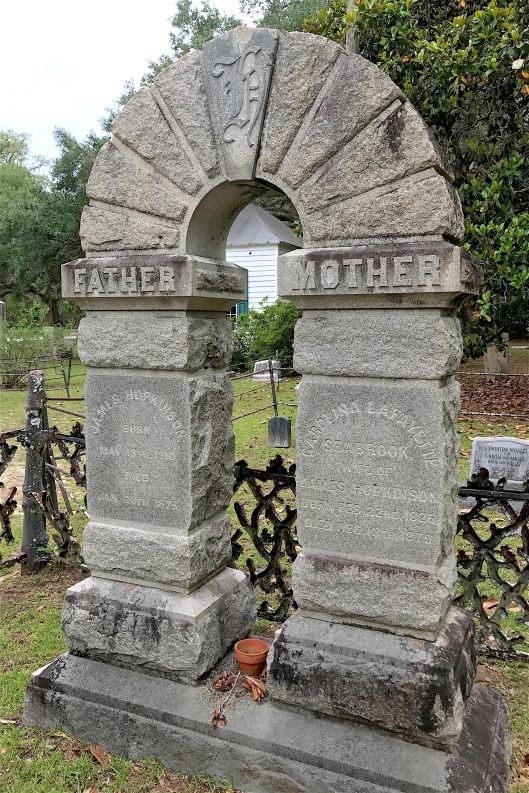 Daughter Carolina Seabrook Hopkinson outlived most of her family, dying at the age of 54.

William and Elizabeth also had a son, Joseph, in 1823 who was one of the eight church members who tragically died on the Steam Boat Pulaski in 1838. Daughter Carolina, born in 1825, married James Hopkinson. She died in 1879 (outliving most of the family) and is also buried at PCE near her mother, brother and two sisters (Julia and Mary).

So that’s the true story of the life and death of Julia Legare. While it’s not as romantic or spooky as the legend that continues to surround her, her family does have an important history worth noting. And while it is true that there are cases of people who were buried alive when their family thought they were dead, this isn’t one of them.

Next time, I’ll talk about some new revelations about the ironwork railings at the PCE graveyard and more of the history of those interred there.