To wrap up my series on Nebraska City’s Wyuka Cemetery, I’m featuring some of the lovely ladies standing atop the monuments I saw. There were too many for me to cram into the first two parts so I waited until the end to give them their due.

The Black family monument is one of the tallest in the cemetery and features one of the most beautiful figures I’ve seen, holding a bouquet of flowers. She’s missing half of the other arm but it doesn’t detract from her beauty.

The Black monument is one of the tallest in the cemetery.

The Black family story was missing a number of pieces until I found an obituary for Robert A. Black in the Nebraska City News.

Irish immigrant Robert Andrew Black arrived in America as a young man, coming to Nebraska City around 1867 as a carpenter. He hired on with the Burlington & Missouri River Railroad Company (known as the B & M). He married Indiana native Sarah Catherine Brenton on March 5, 1871 in Montgomery, Iowa. By 1880, they were living in Nebraska City and had a son, James, born in 1874.

By 1900, Robert was working as a foreman for the B & M. In late August 1904, he went to Rulo, Neb. to check on some work his men were doing. Sarah took the opportunity to visit her younger sister, Elvina Brenton Kulp, in Iowa. Elvina’s husband, Frank Kulp, was a bridge superintendent with the B & M. On the evening of Thursday, August 26, after the day’s work, Robert was giving instructions to a few of his men when he was struck and killed by an engine. 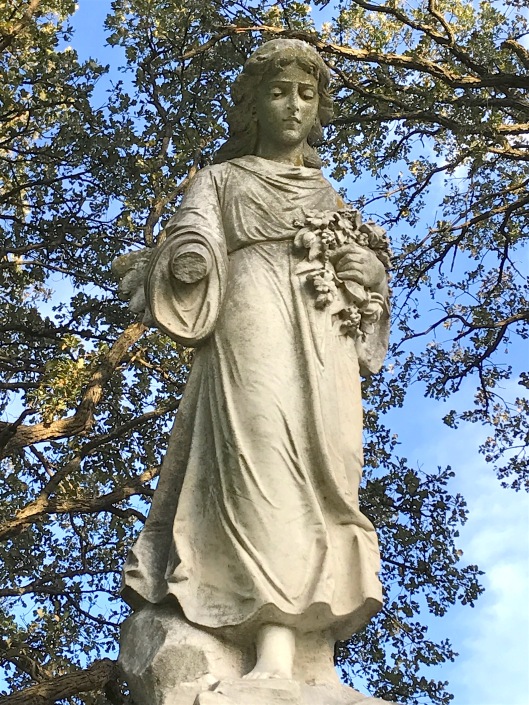 Robert A. Black purchased the monument from the Nebraska City firm of Niedhart & Forbes in 1900. The Reporter deemed it “the handsomest monument in Wyuka Cemetery.”

Robert’s remains were brought back to Nebraska and he was buried at Wyuka Cemetery. According to his obituary, his Masonic lodge, Western Star Lodge #2 A.F. and A.M. took care of the funeral.

The Black monument was erected in 1900, purchased by Robert A. Black to honor his children. It was carved by the Nebraska City firm of Neidhart & Forbes at his direction. By 1908, the gentleman had split up the business with Neidhart moving to Beatrice and Forbes staying in Nebraska City.

Volume 33 of The Reporter, a magazine for monument dealers, reported the sale of the Black family monument in 1900.

Sarah’s sister, Elvina, died in 1907 at the age of 42, leaving Frank Kulp a widower with three grown children. They were living in Gage County, Neb. according to the 1910 U.S. Census.

Sometime between 1910 and 1920, Sarah married her former brother-in-law, Frank Kulp. Soon after, they moved to Los Angeles, Calif., although they would return to Nebraska City to visit often.

Sarah died in California in 1931 at the age of 79. Her remains were brought back to Nebraska City for burial at Wyuka beside Robert and their children. Her will caused a great legal stir because she had sold a number of properties shortly before her death. One of her bequests was to the Masonic Home in Plattsmouth, Neb. The case wound its way through court even past the death of her second husband, Frank, in 1940. Frank is buried with first wife, Sarah’s sister, Elvina Brenton Kulp, in Wymore Cemetery in Gage, Neb.

The Tipton monument features a woman holding a wreath. It’s located not too far from the Black monument.

Ohio native Absalom Tipton was as interested in planting trees as his neighbor, J. Morton Sterling.

Born in Holmes County, Ohio in 1829, Absalom Tipton was the fifth of Luke and Mary Young Tipton’s 11 children. In 1854, he married Martha Ann Norris in Atchison County, Mo. Soon after, the couple arrived in Nebraska Territory and started their family.

Absalom was especially good at cultivating fruit trees, much like his neighbor J. Sterling Morton. His obituary notes that “on his home place, two miles northwest of the city, he had an apple orchard of 500 trees, 700 cherry trees, and raspberry, blackberry and blueberry plants without number.”

Absalom Tipton’s obituary notes that he was one of the leading horticulturists in the state.

Absalom and Martha had seven children together, four of whom lived to adulthood. Martha died in November 1875 at the age of 41 and was buried at Wyuka. Absalom remarried again sometime around 1892 to Loantha Judkins, who was 24 years his junior. They had no children.

When Absalom died from stomach cancer in 1914 at the age of 85, he was buried beside Martha at Wyuka. Second wife Loantha died in 1928 and is also buried with him at Wyuka.

Another towering female caught my attention at Wyuka. The Rottman monument features yet another pensive lady holding a wreath.

F.W. “Fritz” Rottmann and his wife, Maggie, were both German immigrants.

Born in Westphalia, Germany in 1834, F.W. “Fritz” Rottman grew up with few advantages. He emigrated to America when he was 21 and spent a few months in St. Louis, Mo. before making his way to Nebraska City. He worked on a farm for several months before becoming a clerk, assisting his employer in his business ventures.

In 1865, Fritz married fellow German immigrant Margaret “Maggie” Arends, who had come to America with her parents as a little girl. Fritz not only owned a grocery store, he also became a builder, putting up many of Nebraska City’s businesses. He was at one point president of the Nebraska City Canning Company.

Fritz and Maggie had six children together, but only eldest son Frederick lived to adulthood. Fritz died in February 1888 at the age of 53 of “brain fever.” Maggie lived with Fred until her death from Bright’s Disease (kidney failure) in November 1906.

The Rottmann monument’s statue has a pensive look on her face.

Born in 1872, Fred married Elma Petring in 1904 and they had two children. The pair were traveling to Omaha with their daughter (whose name varies in different newspapers) when their train crashed in Fort Crook, Neb. in 1911. Both Elma and the child were killed, and Fred was seriously injured. He remarried in 1913 to Clara Lilydale Koser and they had two children, one living to adulthood. Clara died in 1940 and Fred died in 1945, both buried at Wyuka.

The Mason girls never had a chance to grow up.

Finally, there are two other females I wanted to include but they never had a chance to become young ladies.

Sisters Ellen and Jennie Mason were born to Oliver Perry (known as “O.P.”) Mason and Mary Turner Mason. The Masons married in New York before moving to Nebraska City in 1856. Oliver served as Chief Justice of the Nebraska State Supreme Court from 1866 to 1873. He also served as a member of the Nebraska Constitutional Convention of 1871. Mason City, Neb. was named after him.

Jennie, born in January 1859, died at the age of four on April 24, 1863. Her sister, Ellen, was born June 1862 and died at the age of 2 on Aug. 24, 1864. While the Masons had a daughter before Jennie and Ellen, and would have several more children, the loss of these two little ones must have been difficult to bear. Their sweet marker with twin lambs is especially bittersweet.

It was time to head to Omaha and put up our feet for a bit. But I was a little sad to leave as I looked back to see the sun setting over the old stones. How many stories had I missed?